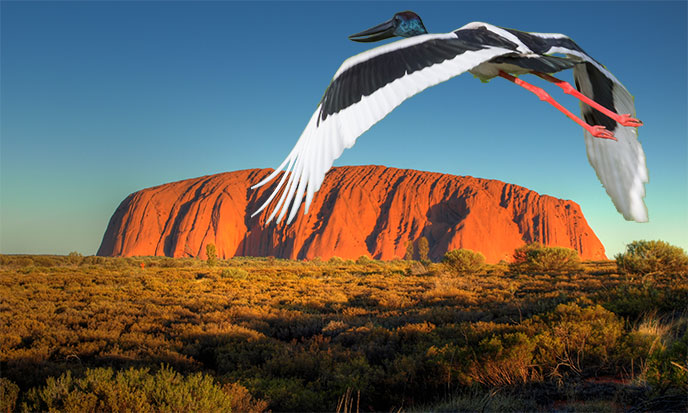 Uluru or Ayers Rock is a large magnetic mount of Australia like Silbury Hill in the United Kingdom, but for different reasons. It is located on a chakra of the earth, like the Great Pyramid. Here is the legend of Uluru out of the Time of Dream.

The large stone has landed gently in the center of the island-world. Pufffff. In a large cloud of red dust, with bright fireflies, the great stone from the sky has landed without a nest on the sacred land of Australia.

It was the Dreamtime. The Real MenThe formula is to Marlo Morgan in her book Mutant Message Down Under came together at heart of the world, where the winds take root. The thing is rare in the Real Men, because everyone goes his way, everyone can draw in the Dream and its sacred song the way for his magic step. To meet is not the use, but the stone had required it. They all came in on time and the thing is rarer still. Because Real Men do not follow the limited time of Mutants. Real Men live the Dreamtime.

I imagine that for the mutants who read me the Dreamtime has not the least reality. For the Real Men, it is the world of Mutants, ie ours my friends, which has no reality. This sad world when you get bored, our world of hard material, gray skies and injustice, of disaster, of vice. Ignorance of hatred, fear, mindless state, oppression, nothingness for the soul. Awaken were the the Real Men. Only the alcohol of the whites anesthesized them in the shanty towns on the fringes of the outback: so is called the hinterland desert.

Night after night they watched the Earth getting round. They expected its end. The Real Men had seen the signs, they had long listened to the voices of the winds, they had read the language of the stars, they knew.

Standing, they waited. It was the month, it was the place. Modulating the song of the Earth in F sharp, they sang. Blowing in the ancient didgeridoos, sorcerers have shamanized. And the full moon finally appeared. The large stone comes.

The Real Men have made the circle on the vast plain, a circle so large that one could not see it entirely. The Real Men held their breath. A shooting star ripped the sky to the east. The reddish light ignited the hair and bronzed skin of the Real Men.

A triumphant day has dawned. 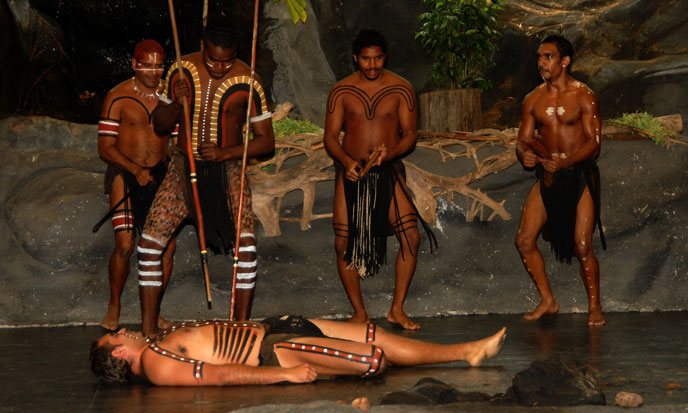 Living sparks were covering their head and shoulders. The whole landscape has taken this beautiful reddish color which is now that of the heart of the world, the large southern island of the Real Men. Then came the great stone. It seemed carried by the huge sun which filled the sky in those days. A large white sun of love. Its light and heat carried all beings as the arms of a mother carry her toddler. The great red stone stood still just above the the Real Men.

The large stone levitated there, quiet, right in the center of the huge circle they had formed in the plain. Slowly it began to descend. It slowly approached the ground cracked, while were fleeing snakes, raccoons, insects and lizards. The plain attentive, excited, wanted the impact. But the stone took its time, carried by the heat of the Sun in love, it did prolong the agony, expected from the beginning by the Real Men standing silently at the edge of the Dreamtime.

The large stone was guided down by the united wishes of the Real Men which were embodied in the fairies of light filling the space around. The majestic descent of the great red stone is a show that the Real Men will not forget. It is the gift of the snake Wagyl to mark the boundary between the Dream and our world, that of the mutants that we are in the eyes of the Real Men. The Dreamtime has suddenly ended, the running time that has replaced it: changes!

The moved plain has received the stone in its body. Without a sigh, without crushing a single blade of grass, without disturbing any chrysalis, the stone married the earth. The Real Men approached, approached… but they have not touched it. Their circle has tightened around the stone. They were holding each other by the shoulders, their immense circle turned into a spiral whose only the first turn was against the red rock, right up against the great stone, without touching it, especially without touching it.

A long murmur grew in the hearts of the Real Men. 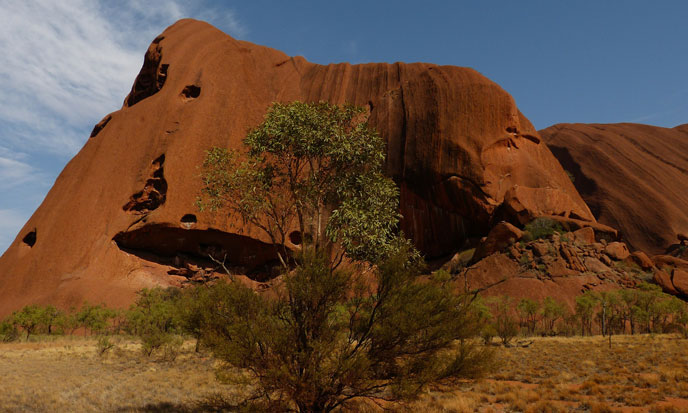 And the whisper said: “ULURU… Your name is sacred to us all. You have landed in the heart of the world to be a divine temple. The hand of man you has not shaped you, the matrix of the Earth did not carry you, you are the sacred gift of the stars. Red light in the sky, red light on the True Earth, you shine forever in the hearts of the Real Men. You are red like our heart, red like our blood, red like our skin.” Since then, ULURU is the most sacred place for all Indigenous Australians.

In contempt of their beliefs they call superstitions, Whites have renamed this “natural curiosity” Ayers Rock, they organized tours, with construction of bloody hotels. While the last Abos, the aching heart and alcohol in the blood, blow in their didgeridoos between a sloshing and a photo shoot…

“Uluru is a large magnetic mount which is reminiscent of Silbury Hill in England. It is located on a chakra of the earth, like the Great Pyramid of Egypt”. (source)

We are all visitors to this time, this place. We’re just passing through. Our purpose here is to observe, to learn, to grow, to love … Then we go home