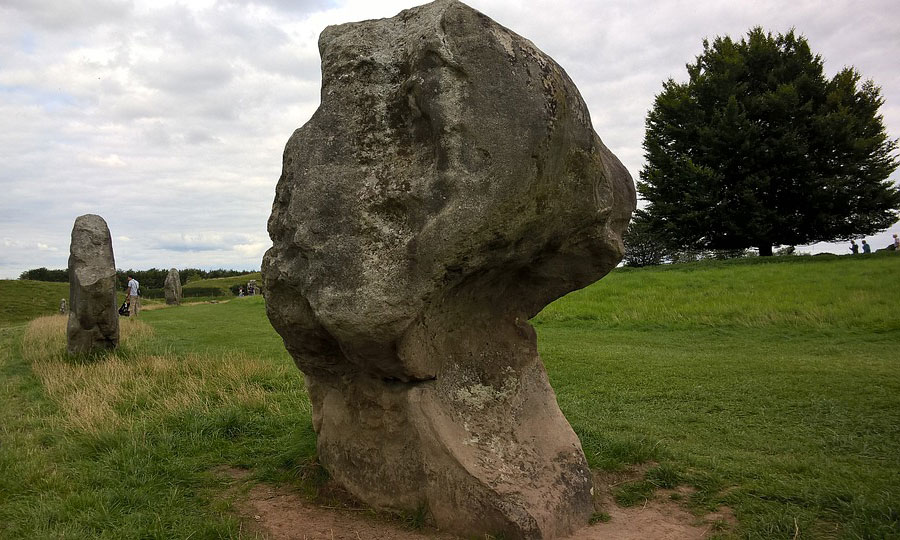 In a first chapter devoted to the site of Avebury, we just saw how this megalithic machine worked: as a power plant capturing and converting energy from lightning.

Even if lightning is produced by clouds, it can fall by any weather. In natural conditions, we saw lightning flashes fall 9 miles ahead of the clouds. In a lightning power plant, the effectiveness of antennas (or sensors) allowed the Atlanteans not to depend on the storms, but to attract them. The sensor of Avebury’s power plant is Silbury Hill, the pyramidal hill. May the reader judge for himself:

Recent excavations have shown that this conical pyramid consists in compartments of granitic stone filled with limestone. Silbury Hill is a large electric battery, a gigantic prehistoric battery. What is more efficient to attract lightning? This is where you can marvel at the inventiveness of our distant ancestors … which contrasts with the stupidity of our archaeologists. No one has understood the composition of this artificial hill…  A priori, this giant battery was not made for storing energy, but to preserve a certain electric potential that acted upon the clouds like an electromagnet terminal. Thus, the beneficial lightning could fall endless on Silbury Hill, which distributed its benefits to the surrounding land.

During a first trip, still ignoring the function of the lightning antenna of Silbury, we foolishly climbed the hill. We had the secret hope of discovering a crop circle from above without having to make the ride in a microlight. This stupid pattern obscured our feelings and we had to pay for our mistake. “Move away, nothing to see here,” the Hill told us. One of us noted that the pyramid of Silbury was vibrating at a very low level on the Bovis scale. But like idiots, we did not care.

Deaf to the clear messages from our bodies, we ignored them… To reach the pyramid, we had to cross barbed wire, where one of us has torn his hand. The warning was clear, but we stupidly passed on. Climbing was more painful than the slope let suppose: on several occasions, one or the other nearly fell down. Finally arrived on the summit platform, instead of enjoying the view, we had only one thought, to quickly climd down, to leave this unhealthy place. Afterwards, we understood why. 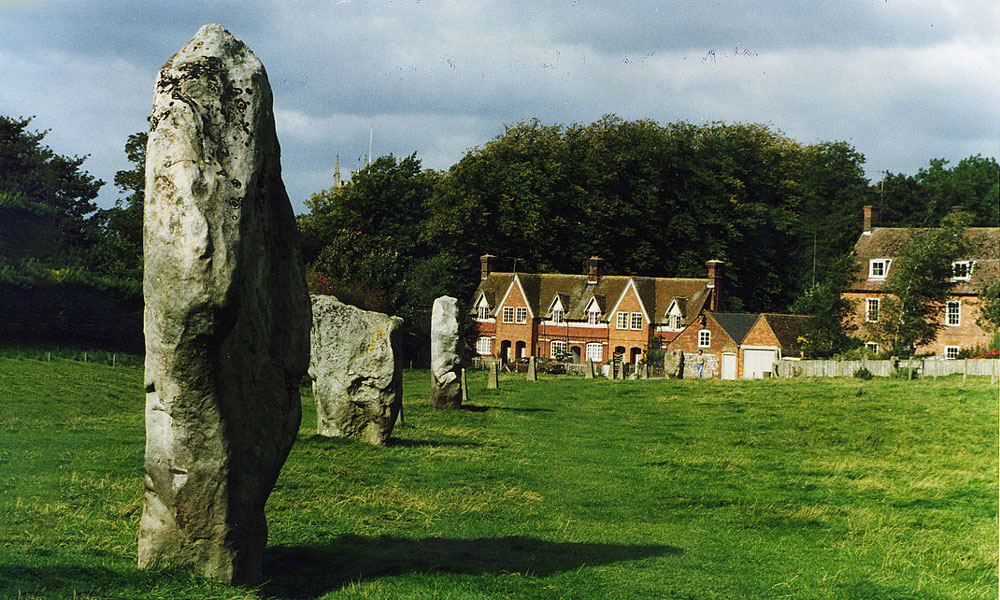 Whoever has the imprudence to stand at the top of Silbury Hill takes without knowing the place of the capstone which was there before. He reactivates therefore the lightning sensor, even if it means becoming quickly a grilled chipolata. Not quite, for the antenna-battery no longer works. But its unhealthy vibration is still quite noticeable.

We had discovered without knowing it the first element of a lightning power plant, the sensor that attracts lightning flashes. And this discovery, if our bodies have done it, our brains did not understand anything. We felt the powerful and terrible effects in our bodies. From there, the rest of the process took two years to become clear in my mind. And if I had not made the second visit, always at the summer solstice, with C *** the fairy, would I have put the word end to this story?

Then, secondly, the lightning captured by the pyramidal hill must be broken up into fire balls. It is the role of Avebury Henge. The Henge is a triple enclosure: inside is a wide circle of menhirs or standing stones. Around it, a circular ditch which was formerly filled with water, like a moat. Around the ditch, an earthen levee, a sort of circular dike which probably contains a bed of pebbles in its base, as the Wansdyke we will see later. This triple enclosure forms a magnetic cage which forces lightning to follow the path of the menhirs. Better than a wire, the magnetic cage channels lightning in the path traced by the menhirs. The latter have alternating polarities, ie a menhir with positive polarity at the top is followed by a menhir with negative polarity at the top.

These alternated polarities form a forced pipe where lightning, by dint of rotating at speeds exceeding 94,000 miles per second, is churned and crumbles into balls of light, a lot less quick, and less dangerous too.The lightning balls are still largely little-known by research. Nevertheless they represent an unexpected solution to several major challenges: the energy crisis, the spiritual wilderness and the fear of the future. What occured when lightning, crumbled by churning in Avebury Henge, has been transformed into lightning balls?

Well, under this more accurate form, we can distribute that energy. This is the third step. This distribution is made in three forms; firstly, the electrical energy is used to run their machines; secondly, most of the lightning vibrates and enriches the water of Kennet River for irrigation; and thirdly, last but not least, the lightning balls collide in the magnetic field of the recipients: they receive the baptism of lightning and experience the awakening of their divine powers.

In Avebury power plant, the energy distribution was ensured by the system of avenues of menhirs completed by a network of starlike relays. Some of these relays are still visible: Cheril Hill, Windmill Hill or Yatesbury tumulus. Their task was to distribute energy to machines or metallic engines, but also to spread it on the food crops. For crops, it was a thousand times better than our nitrogen fertilizers! In addition, all living beings, people, livestock, wild animals … All of them were fortified, and even boosted. Some people even supported that the crop circles common in this region, would be the work of lightning balls!

One thing is sure, this clean energy, renewable, inexhaustible, had astounding features that our ancestors, of course, did not fail to use: the lightning nitrates. The natural nitrates of lightning recompose harmoniously in the sap of plants, into organic compounds favorable to their development, without producing chemical waste nor heavy pollutants. This valuable property is still well known in the countries of traditional agriculture, as we will see. 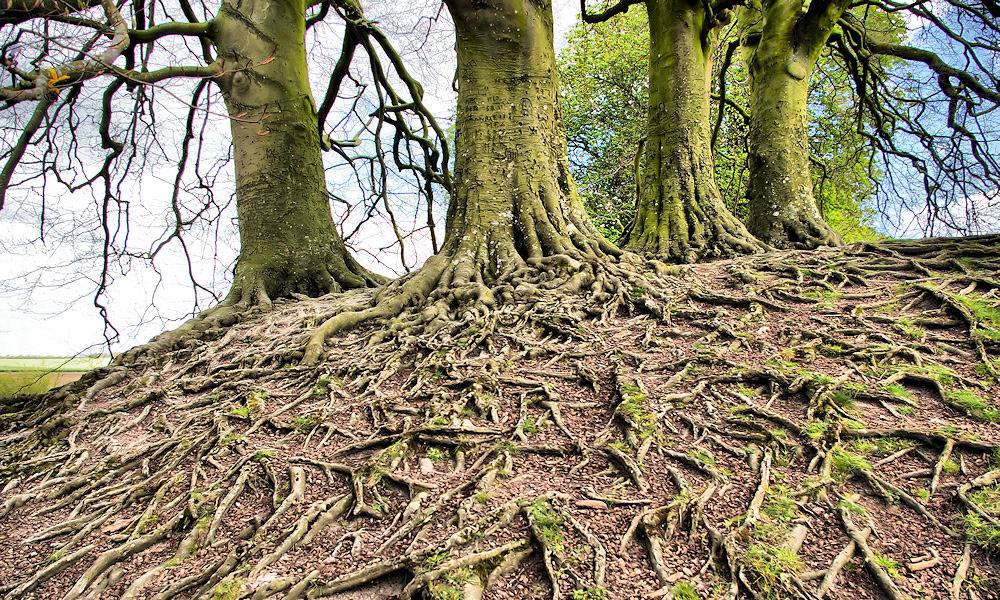 The beneficial effect of lightning is well known to African farmers, who use the land of places struck by lightning as natural fertilizer. According to them, this miraculous fertilizer boosts the yields and increases the resistance to cryptogamic diseases without any risk of over-fertilization. Lightning might well be the spark that created life on Earth, by producing the first amino-acids in the primordial soup. The news was just recently confirmed by … NASA! Indeed, the US space agency NASA uses airplanes to record the effects of lightning on the atmosphere. It appears on this study that the air composition is affected by lightning. The ionization it causes creates new compounds, including ozone and natural nitrates.

Nitrates? Did you say nitrates? Coming from animal liquid manure, nitrates are the basis of modern farm fertilizers. As I live in Britanny, I am fully aware of that problem. With the disadvantages of odor during spreading, and of dispersion of heavy pollutants, the manure have nearly killed a department in Brittany. And their excess leads to the proliferation of green algae, toxic but essential to the ecological balance. Finally, to fertilize agricultural lands, there is no better than lightning …