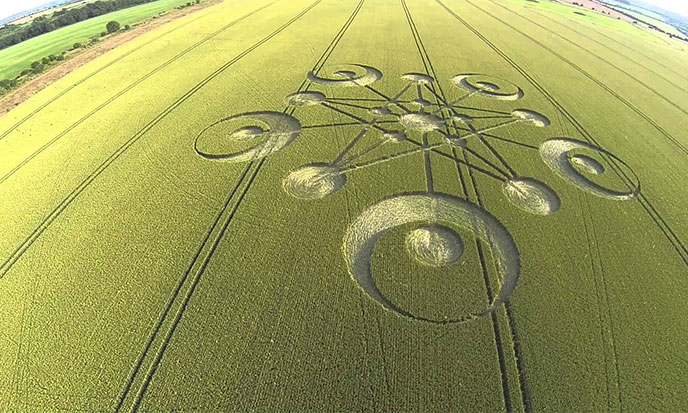 I have been to Wiltshire several times in Avebury and the surrounding area. The place is of rare power – extraordinary. I have been conducting an investigation on the crop circles and all the connected phenomenon going on for thirty years. Those who are concerned will find in the following lines the result of my research.

Manifestations of the sacred energy of the Earth or alien messages, resurgences from a magical past or mysterious warnings, the crop circles do not leave anyone indifferent.

The crop circles, or cropies, are geometric patterns, often circular, which have formed from April to August in the cereal fields in Wiltshire for about twenty years.Thirty years in 2019 So? What do I think of it? My deep conviction is still uncertain. The Cartesian who sleeps in all French would say that it is about art, an ephemeral but very mediatized art.

Artists gain fame for their work, and the region gains tourists. No, no, it would be too simple. And so sad! Give dream a chance. The whole affair is shrouded in a delicious and poetic mystery like the famous Barge Inn in Alton Barnes – a waterside inn where the barges stop, and where I loved to take up my quarters in the neighboring campsite.

First mysterious circumstance within a long list: the “cropies” are formed night and day, without it ever possible to locate their authors. The Barges Inn has this name because it serves as a stopover for hikers, friends because it is the summer rendezvous for all the bargeots in the United Kingdom and the rest of the world. The hunt for crops and the collection of hypotheses about their origin and their meaning – each one of hers and passionately defends it – is a ritual that participates in the cropmania.

Initially marginal and limited to the south of England, the phenomenon was accentuated in the 90s, to spread all over the world, without equaling the British production which remains the Mecca of the Crop-fans. Every summer, celebrating the summer solstice brings in Wiltshire characters from fairy tales. And rural miracles! Over the summers, they have counted dozens, then hundreds of them, even in Korea and in New Zealand. Their complexity increased in the same proportion. 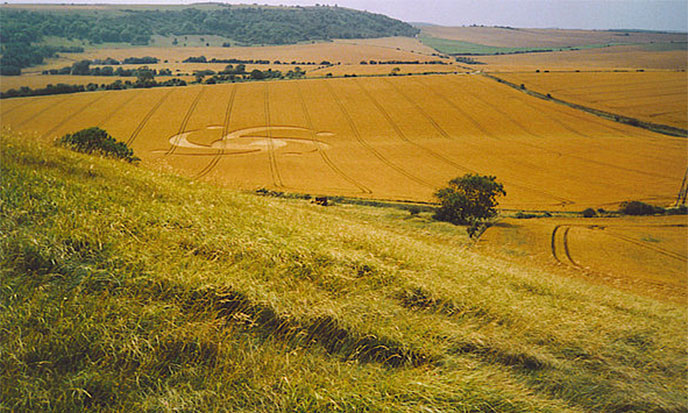 The most beautiful ones are geometrical, artistic and technical feats. They flourish from summer solstice up to crop time, near Avebury and its circle of megaliths, in Wiltshire (GB). And invariably, next to Marlborough, East Kennet and Alton Barnes, the wind of supernatural slightly blows. You can meet really mystic people wandering through the crops at the break of day. Not far from these high places is the imposing machine of Stonehenge where some hippylike neo-druids hold fish and chips stalls.

But the wise visitor will prefer, by far, the powerful cosmic-telluric energy of Avebury to that, feeble and polluted, of the British “Mont-St-Michel.” Of course, it’s an indisputable spectacle, especially at sunrise and sunset, but the energy level is far from equaling the Avebury Henge or all its megalithic ensemble. Everything depends on what you are looking for.

Some people think that crop circles are extraterrestrial creations. Warning messages to our species on the edge of the abyss. What message ? To stop our bullshit and madness, I guess. But the meaning of the warning would gain more clarity and transparency.

Others think that these surface traces are reflections of stone circles buried under the earth of the fields since millennia. These testimonies, according to them, come from the very time of the construction of the sites of Avebury and Stonehenge. How do these reflections get printed in cereals? Here again, everyone goes for his more or less smoky explanation. Nobody agrees with anyone, but everyone listens to everyone.

For me, at this stage of the investigation, the origin of crop circles remains unexplained. As I said, the many UFO freaks see it as the work of extra-terrestrial saviors. They made it a new religion. Sitting in a circle in the middle of the cropies, they raise their arms while singing hypnotic hymns. They feel good there: if the fake cropies have the same – good or bad – energy as the rest of the lanbdscape, the real crop circles vibrate as much as a Romanesque church. Which raises a question: is the vibration caused by the drawings in the wheat, or by the emotion and the fervor of their worshipers?

The Nimbus teachers have their own theories, they laugh and argue and sing in the colorful setting of their headquarters, the famous Barge Inn, down by the banks of Kennet River, and surrounded by kind of a merry-go-round of a camping ground. One of these cropies experts thinks that the megaliths create electromagnetic fields which materialize in the crops by tracing these curious forms. Another one evokes mysterious pebble beds, buried beneath the current fields.

These beds would leave their imprint on the surface through a mixture of wave forms and field theoryIn a physical meaning, not agricultural!. A third one is struck by the computer appearance of drawings: for him, the crop circles are made by computer. Possible, but how does the computer draw the pattern in cereals? The thesis that comes most often, always booed, is that of budding artists. Discrete but very human. Shocking! No way to envisage a human origin to that madness which drives so well the region for over twenty years. But according to a local farmer, the crops have been around forever … 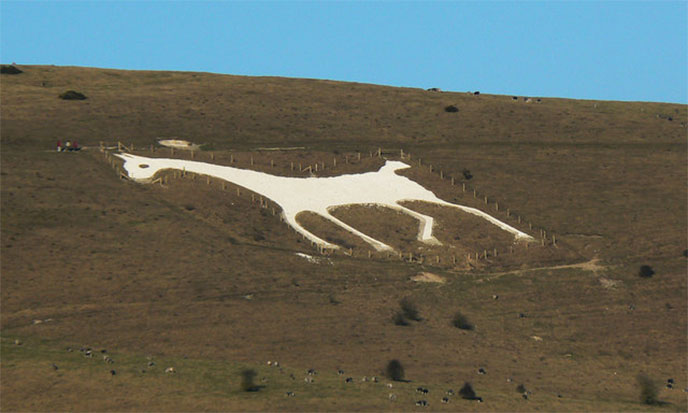 As evidenced by the large white horses decorating the hillsides around, drawing the soil is a local sports since Neolithic times. No surprise if it continues today in more contemporary forms ..

According to a local farmer, the crop circles have always existed: “These circles appear in the fields since I was a little boy. We used to play there, it was funny. They reappeared almost every year. And now we make a fuss about it!” (source)Le Plan pour Sauver la Terre by Christel Seval, French edition As always in the case of such high publicized events, counterfeiters have appeared repeatedly. But they are so easy do notice! Mostpart look like shit. Even the better imitations are pale copies of the much genuine cropies. They are so much better realized that no comparison is possible.

Please notice that the finest cropies have never been assigned to someone or something. But centuries ago already – perhaps even millennia ago – the inhabitants of this little spot of the world had the taste to adorn their hills and pastures with curious drawings. They engraved horses most often, sometimes humans with a shamelessness of good quality at the time when hypocrits are the majority. If this pleasant habit always existed here, no wonder it continues now in a new form, “ephemeral art of a summer”.

Some are convinced that geometric plots are first executed on computer before being made life-size on crops. Why ? To look pretty and loose the languages. It works flawlessly. How? The story does not say. 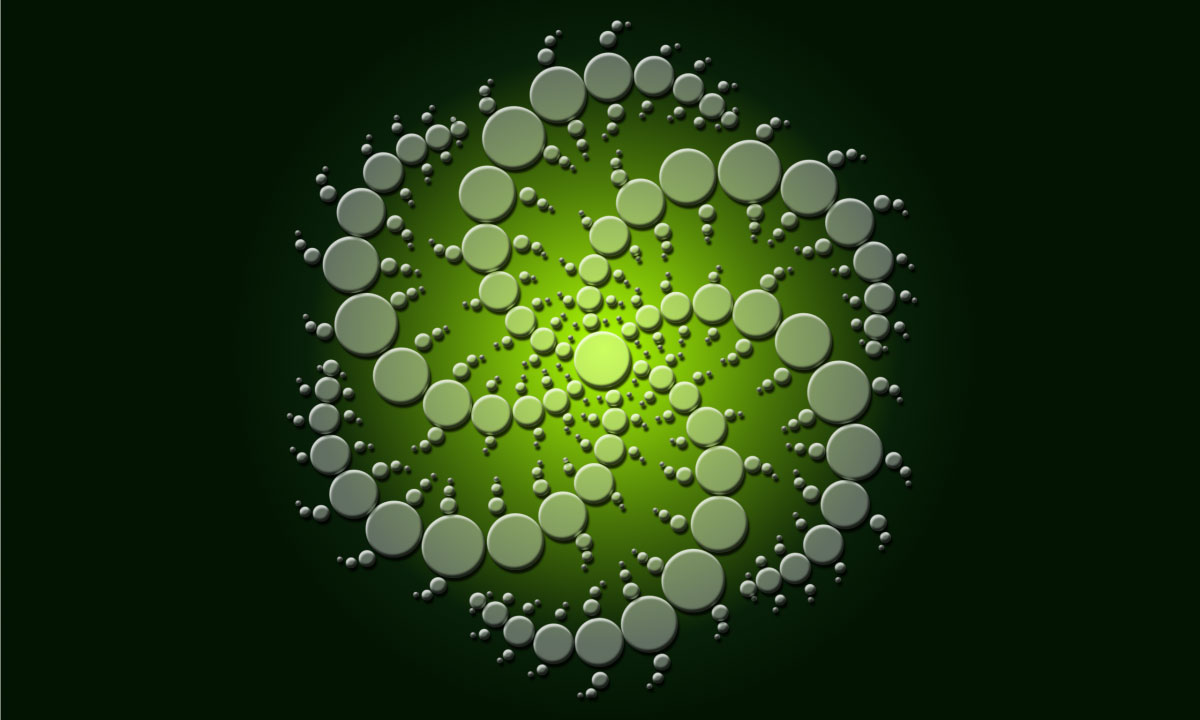 However it doesn’t look difficult if you are precise. Just plant a stake at the center. Then, by attaching a rope at the stake, you can easily draw all the geometric shapes of circles. Moreover the rope would leave in wheat, around the stake. I have to say I could observe puzzling star traces illustrating this hypothesis in several croopies. Well, well, well …

But this delicate technique would take too long, and the authors would be seen every time. And yet, as we said above, nobody has ever seen or shot someone, human or Martian, busy drawing a cropie. So the dream can go on.

It is true that the law of silence on the realization of these indisputable works of art guarantees the influx of tourists as worshipers. And it works the trade. If the local people sold the wick, the source of profits would dry up. Which does not seem to be the case, on the contrary. From year to year curious, skeptical and faithful crowd in the fields but also in inns, campsites and B & Bs. The secret is well kept, Every people there watch over it.

Having often made recordings, some crop circles vibrate very high on the bovis scale: between 9,000 and 11,000 bovis, a nice score. It may be objected that the site of Avebury have a rather high rate of vibration. True, but my measurements showed that other parts of the cereal field do not have the same charge, not to mention the imitations, which vibrate a little lower than the rest of the field.

Sensitive people are aware of a certain range of facts so difficult to decipher that they can be easily hoodwinked. Would these curious drawings in the wheat be artificial terrestrial chakras or just a big joke? In any case, the phenomenon quite interest the Army.

“Regarding the process of emergence of the crop circle itself, hundreds of testimonies and video recordings show the famous “little shiny balls”, 1 to 1.2 feet in diameter, visible to the naked eye in broad daylight, which appear and move beyond the fields shortly before that the cropie appears. In 1990, S. Alexander filmed one near Alton Barnes. If the link between the white balls and the formation of the crop circle is now clearly established, its interaction still has to be imagined. 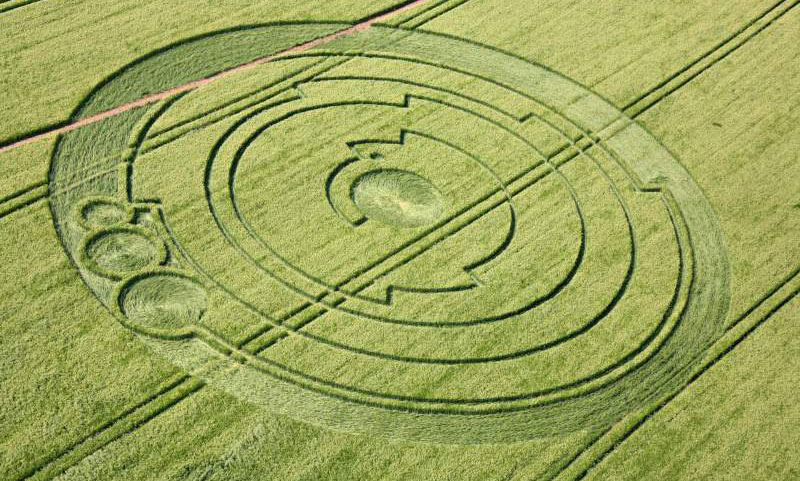 For it is exceptional that a witness saw a circle form under his eyes. The scenario is always the same: the balls twirl above the field, then disappear and a few minutes later, the crop circle is there. Very few people have seen wheats lie in spiral along the whirling movements of these lights as if they were sucked up by a gust of wind.” (source)Nexus n°52, sept-oct 2007, p. 51

By their size and their behavior, these balls of light are reminiscent of lightning balls. But then, lightning occur only during a storm. Still I am doubtful!

They cited lightnings striking very far from the cloud, in an area of clear sky located sometimes more than 6 miles away from the cumulonimbus. On the other hand, who knows how lightning balls form? Is it an electrostatic phenomenon that can occur in the absence of storm? What is known about the lightning balls, is their appearance of white fire, bright but not dazzling like the flashes of lightning.

We also know their moving, erratic way as if guided by an outer intelligence. The Swiss geobiologist Stephane Cardinaux has another opinion: “I think the balls of light that people have perceived on the crop circles are Elementals.  Whoever the authors are, humans, devas, or others, these drawings allow the Earth to regain its balance and at the same time, the Earth allows us to experience its energy.” (source)Nexus n°52, sept-oct 2007, p. 54 From so unsure and too rare evidence, we cannot conclude anything.

But there is here a real avenue of research, and a fascinating subject of study. Unfortunately the country of Descartes, maybe too rational, is deprived from the garden parties around the cropies. The same Cardinaux has another answer for that too: “You should just command some!” He effectively claims to have ordered the crop circles that occurred in 2007 in Switzerland, according to specific drawings that have been largely respected. Swiss people are then less rational than French people are.

If you don’t succeed in ordering crops in France, cheer up: Wiltshire is not far. And the summer solstice at Avebury is a gorgeous rendez-vous. Meet you all at the Barge Inn, Alton Barnes. 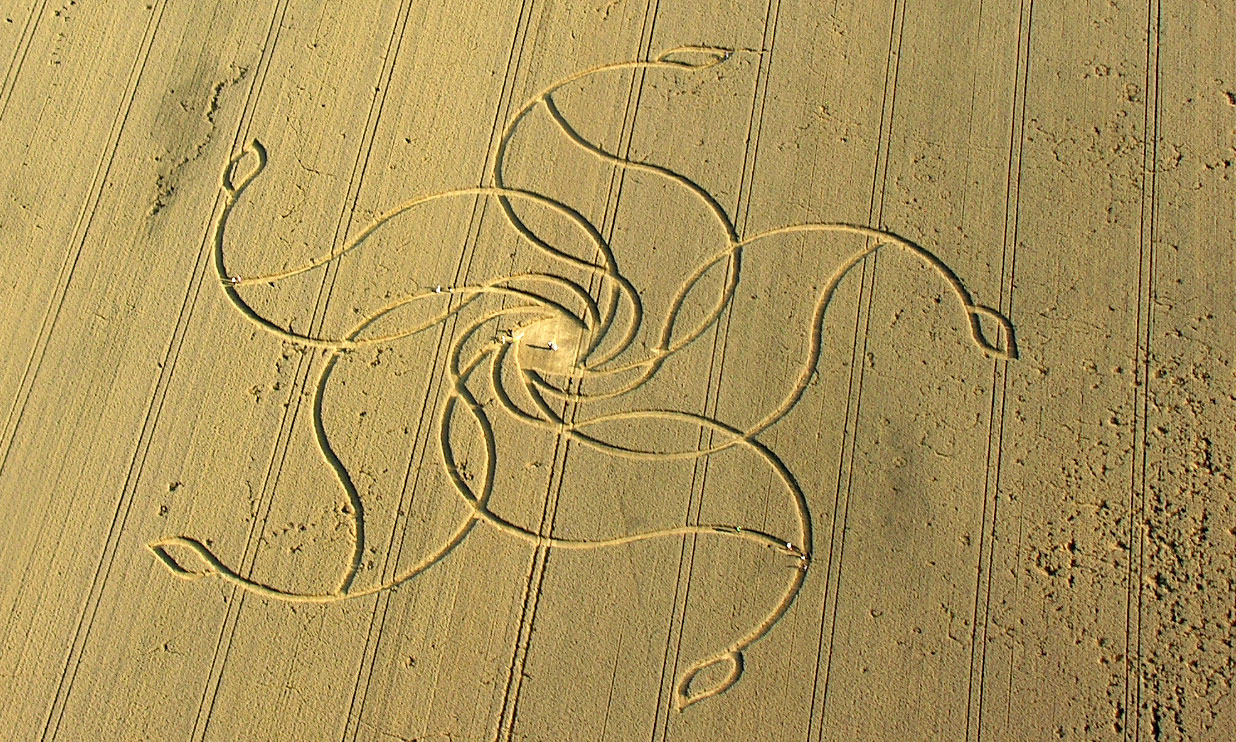 Many the pitfalls of complacency.