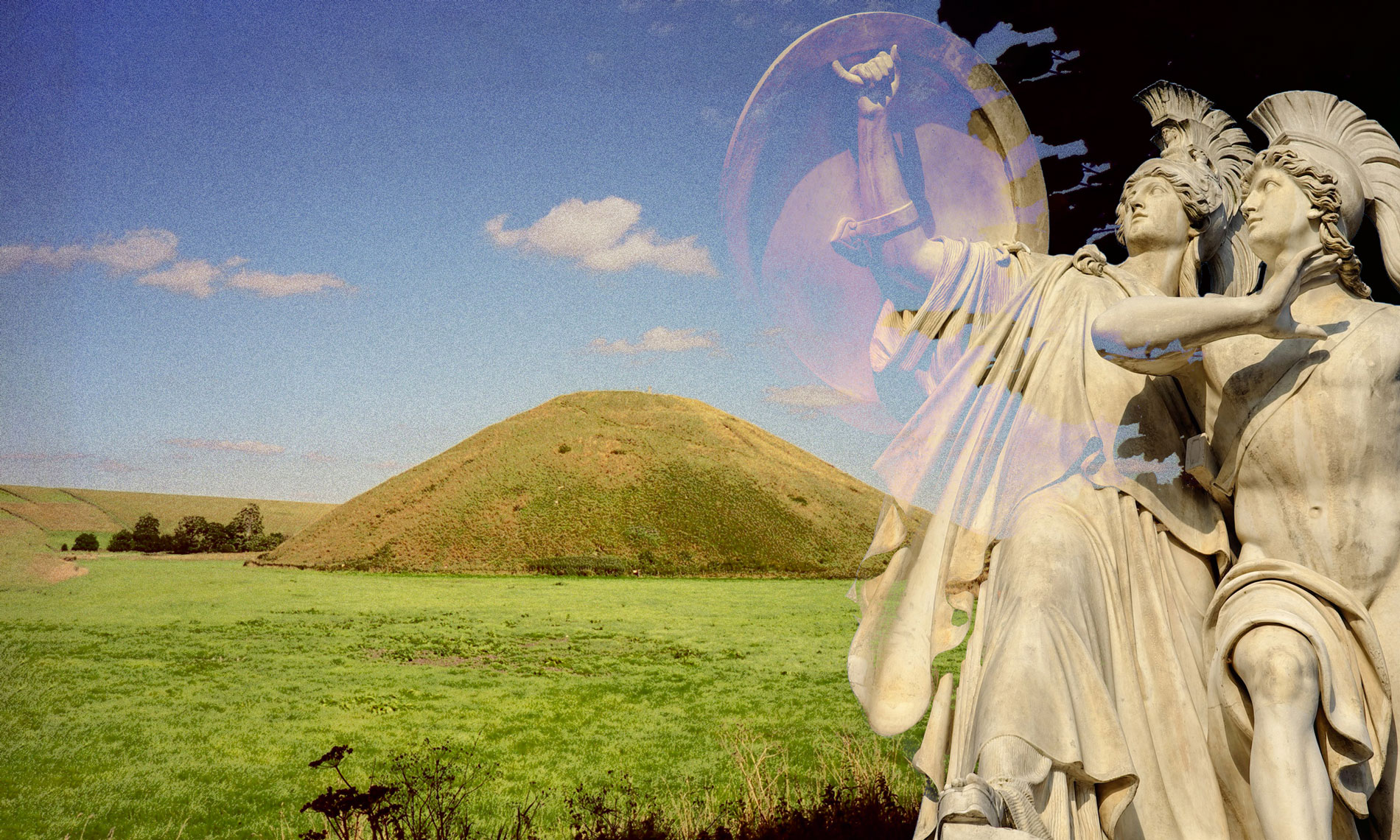 Decidedly, Wiltshire is a county of high magic. The lovers of dark Forest  win have an advantage to cross the Channel to discover wonders: the cromlech of Avebury and its major alignments, the long barrow of West Kennet and the pyramid of Silbury.

“Silbury Hill is a tumulus 40 yards high, located near Avebury, Wiltshire County, UK. This region is covered with Neolithic monuments of all kinds, including Avebury HengeThis English word is sometimes translated into cromlech, stone circle or megalithic enclosure, but the translation is rough, for the simple reason that we do not have any model in France., two megalithic alignments, the chambered tumulus of West Kennet and 19 miles further south, the monumental site of Stonehenge. Silbury Hill is the largest tumulus in Europe. It had never disclosed any internal funeral structure despite the multiple researches performed since the 18th century.

Composed mainly of chalk extracted from the immediate surroundings, the hill is 40 yards high, revealing vast technical knowledge, complemented by prolonged skills in civil engineering, work organization and supplying on a site of exceptional size. Archaeologists believe it was built about 4,750 years ago and that it took 18 million hours of work to achieve it, what means the effort of 500 men for 15 years for moving and shaping 745,000 sq ft of filling materials supplementing a natural hill.” (source)wikipedia

The estimated date of construction, -4750, is probably too recent. By comparing this architecture to other Neolithic works, we would rather situate the erection around -6000. The work evaluated by archaeologists was probably less massive and shorter, but still lasted decades, like the construction of a medieval cathedral. “The first phase of construction, radiocarbon dated at -2750 ± 95, consisted of a gravel base with a coating border in posts and sarsen rip-raps.

Blocking layers of chalk were alternating with earth, the second phase requiring more chalk for the upper part of the monument, using materials extracted from the ditch located around the structure.” (source)wikipedia

In fact, it appears afterwards that this ditch has not only served to collect building materials for the mound. It was filled with water by the diversion of Kennet River,  and was used to deliver Vril energy to the circles of Avebury Henge.

“The first real excavations were conducted in 1776. Led by the Duke of Northumberland, a team of miners from Cornwall drilled a well from the top to the bottom of the mound. In 1849, a tunnel was dug by Dean John Merewether, from the edge to the center. Further excavations were undertaken in 1867 and 1886, and William Flinders Petrie did researches on the hill after the First World War. In 1968-1970, Dr. Richard Atkinson opened again the tunnel of 1849 and undertook in Silbury researches and works that have been reported by BBC television.

Among other discoveries, Atkinson found the remains of winged ants that indicate that the construction of Silbury Hill has begun a month of August. Atkinson argued that the hill was built in stages, each level being filled with compacted chalk, then simply smoothed or eroded by time on the slopes of the hill. Others have found on the slopes a spiral path, and claimed that the construction had to be gradual, the processional path providing a way to the summit.” (source)wikipedia

This we must strongly deny. There has never been the tiniest procession climbing round nor the slightest ritual upon this mound. In any case, never when it worked. For its builders, it was neither a sacred place nor a religious building, but a tower of Tesla acting like a lightning sensor. So a dangerous place, marked by lightnings and a skull, such as the electrical transformers. The circular path has been traced to set and maintain the metallic pyramidal object surmounting the mound.

If the enclosures of sarsen filled with chalk acted like a giant electric battery, to maintain a high electric potential in the tumulus, a summit antenna in electro-conductive metals (copper, gold, silver, etc…the orichalcum of the Atlanteans, so dear to Plato, for example) was necessary to capture lightning, such as the metallic pyramidal object that crowned pyramids. That at least is our hypothesis, that came to us by climbing the hill.

“Silbury Hill has revealed little Prehistoric artifacts: its base only delivered clay, flint, grass, moss, top soil, gravel, freshwater shells, mistletoe, oak, walnut, sarsen stones, ox bones, stag’s teeth and antlers. Roman and medieval elements were found on and around the site since the nineteenth century and it seems that the site was reoccupied afterwards by different people.” (source)Wikipedia

It is quite conceivable that these ignorant people have organized processions or even local funerals, confusing, as our archaeologists, any monumental place with a sepulture. But the prehistoric show must go on.

“In may 2000, a collapse of the mining well of 1776 formed a hole at the top of the hill. The English Heritage has conducted seismic research to evaluate the damage caused by previous excavations and determine the stability of the hill. Repairs have been undertaken, but the site remains closed to the public.” (source)Wikipedia

And it is a very good thing. We saw earlier what happened to us when we wanted, like four stupid tourists, to climb the round path to access the summit. Serious error. Of course the summit offers a beautiful view, but the vibration rate is so low that sensitive persons may encounter health problems.

“The archaeologists of English Heritage have dug two other small trenches within the framework of repairing works and made the important discovery of a piece of wood, the first to ensure an archaeological context on the site, which gave with radiocarbon a reliable dating of 2490-2340 BC, dating convincingly the second phase of the mound from the late Neolithic. Other recent works have focused on the role of the surrounding ditch, which was not a simple source of chalk for building the mound, but a place filled with water, intentionally arranged to isolate the monument from the rest of the world.” (source)Wikipedia

The verb to isolate is not appropriate; in the electric sense, it is even an absolute nonsense. Water is not insulating but conductive. The water in the ditch connected to Kennet River, was used to route the lightning energy. There is nothing either sacred here: let us not forget that we have here the most dangerous element of an electric power plant, the equivalent of the core of an atomic reactor. In much cleaner, however. But on a subtle level, not less dangerous.

However civilized the former gods were, they left us a lot less junk that we will leave to future generations.

“On May 11th 2007, Skanska, under the direction of the English Heritage, began a wide program of stabilization, filling tunnels and wells with hundreds of tons of chalk. At the same time, a new archaeological study was carried out with modern equipments and techniques.” (source)Wikipedia

Nevertheless the first excavations, like the recent replenishments, forever disqualify this magnificent structure in its role of lightning antenna. These same archaeologists spend their days complaining of sabotages and irremediable damage caused on some sites by treasure hunters.

Why don’t they call into question their own methods, too often marked by prejudice and ignorance? How will the future ages consider this vandalism?