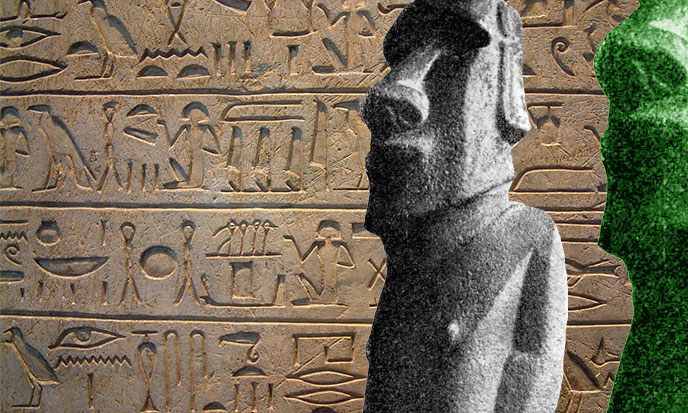 How to correctly decipher hieroglyphs? The question is not new – since the Rosetta Stone provided but a local response – huge feit indeed, but limited to the Egyptian hieroglyphs.

However hieroglyphs are found around the globe, through many various representations – more or less explicit. This writing is not the exclusivity of the ancient Egyptians, of course, even though our alphabet owes them a lot.

Klaus Dona team searchers found the same writing on stones or terracotta objects in many different countries. Faute de mieux, they called pre-Sanskrit. They could name it pre-Celtic or pre-Mayan as well … They found great similarities between this writing and other hieroglyphics, undeciphered, like those of Easter Island.

Professor Kurt Schildmann was the President of the Society of German Linguists. He was the first to decipher the Indus Valley texts which are mainly written in phonetic archaic or proto-Sanskrit. Since 1977 he has consistently claimed that the even more fascinating Burrow Caves (Illinois, USA) texts are also Proto-Sanskrit. Several of the glyphs in Montana USA match the Burrows cave glyphs, crop circles, cymatic symbols and petroglyphs from around the world. (source)Julie Ryder

Except that, insightful, Erhard Landmann found much more. What he read on the stones is quite staggering. And what he heard is more. 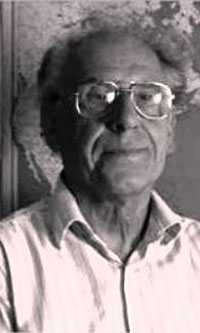 Erhard Landmann is a polyglot German scholar who lead the study of ancient languages to use a new paradigm. His findings are likely to change from top to bottom the study of hieroglyphs, wherever they come from. Flipping through a Spanish-Maya dictionary, Landmann saw hieroglyph that was said or vuothap buothap in Maya. As soon as the click is made in sound. Landmann recognized the old German buchstap, Buchstabe became in modern German. This word means letter or character. The hieroglyphs are letters, as well as images. Second brilliant intuition of Landmann.

Under his eyes, indecipherable Mayan hieroglyphs became instantly a comic relief, perfectly understandable. To images of people or animals, are added signs or emblems that are letters or groups of letters. Sacred. Thus formed intelligible words for the most spiritually that Landmann could immediately interpreted in Old German. And it concluded the troubling consonance between the Quiche Mayan language and an ancient form of German. Quiche again? Xavier Séguin has already emphasized the parallel between the same Quiche language and ancient Gaelic.

And if he could attach sound written, thanks to the Mayan language, still alive, he recognized the sound. Other hieroglyphic languages ​​like Hittite or ancient Egypt, can no longer play this role because they are dead languages. dead languages, ie deprived of his. In the beginning was the Word. The sound was the origin, spoken only is sacred, writing is unclean. The hieroglyphs are not letters but comic strips. 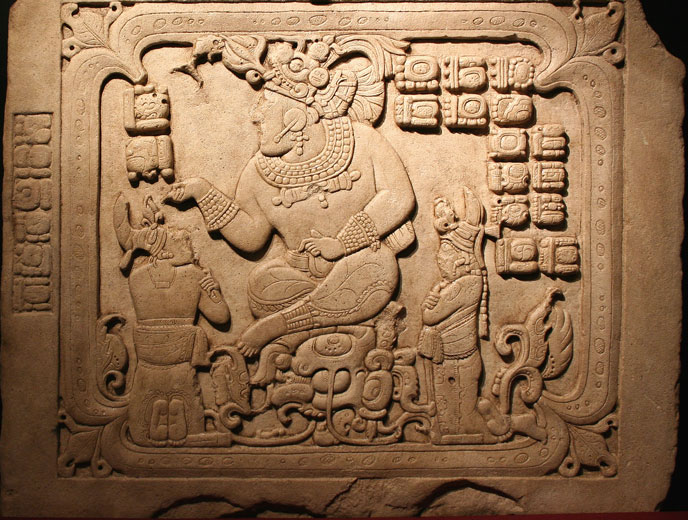 The shelves in Rongo Rongo of Easter Island, for example, are full of letters, words, malformed certainly, but that can easily decipher when looking at the image firstly. This is how the arcana of the Tarot of Marseilles must be felt. The internalization of the image is the sacred way. Inner sounds are the gates of Eden. Our past no longer belongs to specialists, it is now open to the entire species.

In the beginning was the Word, and the Word was God. God, who came from old word THIEUT or THIOT, which means the people in old High German. We are taught in school that god comes from the Greek theos, also gave Zeus, telling us that theos has THIOT and mean people. Zeus is a contradiction. This is not the god of gods, the power of the people. Hard to believe the neo-nazis are trying to recover Landmann! Rather, he was kind of communist.

Anyway, he gave a good kick in the ass of Egyptology. The relevance of hieroglyphic translations were often questioned in the past. Albert Slosman distinguished three levels of interpretation of Egyptian hieroglyphs: trivial, symbolic and sacred. But Egyptologists have not found interesting this new track. Despite all his knowledge, Slosman didn’t belong to the seraglio.

Beyond the very different writing systems, the sounds are often very similar. There are many phonemes that correspond from one language to another. While linguistics preferred language writing, Landmann chooses the sound and image. He found the obvious: in languages ​​with different roots, distant countries, there are phonemes, words, phrases that sound the same. Exactly the same. We saw for Cuchulainn and Kukulkan, for Baalbek and Balbec, for Perun Aska and Peru Nazca. Xavier Séguin call it the language of Goslings. The track I’m a little different, would rather the language of origins, one that we have taught the gods astronauts Hyperborea.

In this perspective, impossible to give German language more prominence than others. Some might believe that the people who speak that language is the sole heir of the gods before. We know where this shit could lead. We have made the horrifying experience recently. Pangermanism is dead and can not be revived. So? The language of Goslings gives a clue: with such a name, Landmann could only be chauvinistic.

If the old High German has preserved many sounds of the first language, isn’t it the same for Breton, Hindi, Slavonic, Mayan, Hebrew, Greek, Latin? The goal here is the search for origins, not the steeple of supremacy.

What matters behind the sounds of a supposed first language is the permanence of a history we find traces everywhere: our history, the story of yours. What matters is the search for our origins to which you are all invited. Enjoy this new gama, decrypting secret messages, ignored forever, yet that teem in the sounds and phonemes of all the dialects of the world. So the first language joins the language of Goslings.

Friends of the world, to your languages!