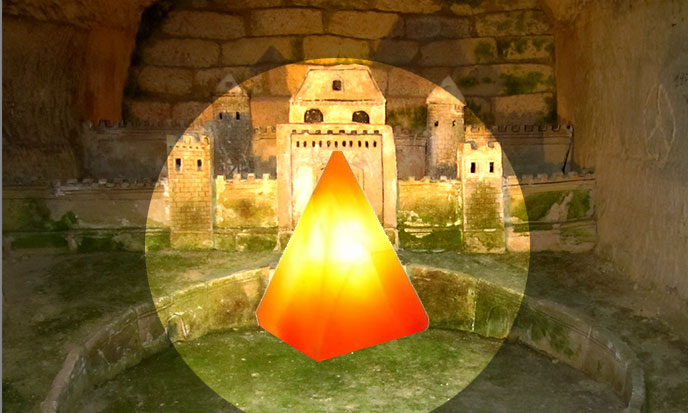 We have seen that electricity – or rather the vril or geo-energy – was known to the ancients. We also saw that perfectly controlled geo-energy was used as a means of awakening.

Another phenomenon, totally unexplained, shows that artificial light was known to the ancients: the perpetual lamps. Andrew Tomas has drawn up a long list of classic authors who mentionned the existence of these lamps that never go out. Where do they draw their energy, if not in the ambient Vril?

In the 15th century in Rome, when they opened the tomb of Palla, it was illuminated by an eternal flame, which had been probably lit for more than 17 centuries!

Louis IX aka St Louis had a friend called Jiechele, rabbi of rare erudition he greatly admired. This Jiechelé knew the secret “of a dazzling lamp that lit up spontaneously.” (source)Eliphas Levi in Histoire Magazine, July-August 1997 He placed it sometimes at night at his window, which intrigued much the people around. Louis IX pressed his learned friend to give him his magic lamp, or to entrust him the recipe, but at the risk of his life the rabbi kept his secret. Although taciturn, he was yet not discreet. He had his own way to chase the intruders who knocked his door.

Jiechele ” touched a nail in the wall of his office and immediately was flying out a crackling bluish spark. Woe to him who, at that moment, touched the iron hammer of the door: the intruder was falling back, curling up, screaming as if he would be buried under earth and finally was running away without further ado.” Eliphas Levi continues: “Jiechele conquered his tranquility that way, by the terror he spread.”  At the time being, they burnt witches for much less!

His electric nail however doesn’t spare him the bundle of the stake, but the protection of the great king did.

“In Irian Jaya, we have heard of a village cut off from all civilization, which would possess a system of artificial illumination equaling or even exceeding, those of the 20th century. The merchants who entered this hamlet lost in the mountains said they had been terrified at the sight of many moons suspended in the air and shining brightly all night. These artificial moons were huge balls of stone raised on columns that, when the sun goes down, began to glow eerily like neons and illuminated the streets.” (source)C.S. Downey, Conference on urban lighting, Prétoria, 1963

Still in Java, there is a particular tradition, the booyas, still in practice among the older local people. What is a booya ?

“The booya is a round stone set in a bamboo handle. There were in these islands only three of these scepters. When the chief was pointing the round stone round towards the sky, a flash of blue-green light was gushing out from it. This “cold light” was so bright that it seemed to surround the audience.” (source)Histoire Magazine, July-August 1997 Since the Torres Strait bathes the shores of New Guinea, it is difficult not to link these booyas and the “moons” of Mount Wilhelmina.”

Wonders of an ignored past, luminous evidence of lost technologies, these inexplicable curiosities show that the present, too, is largely unknown to us. How many remote villages in the depths of jungles, how many lost caves still use this type of light ?