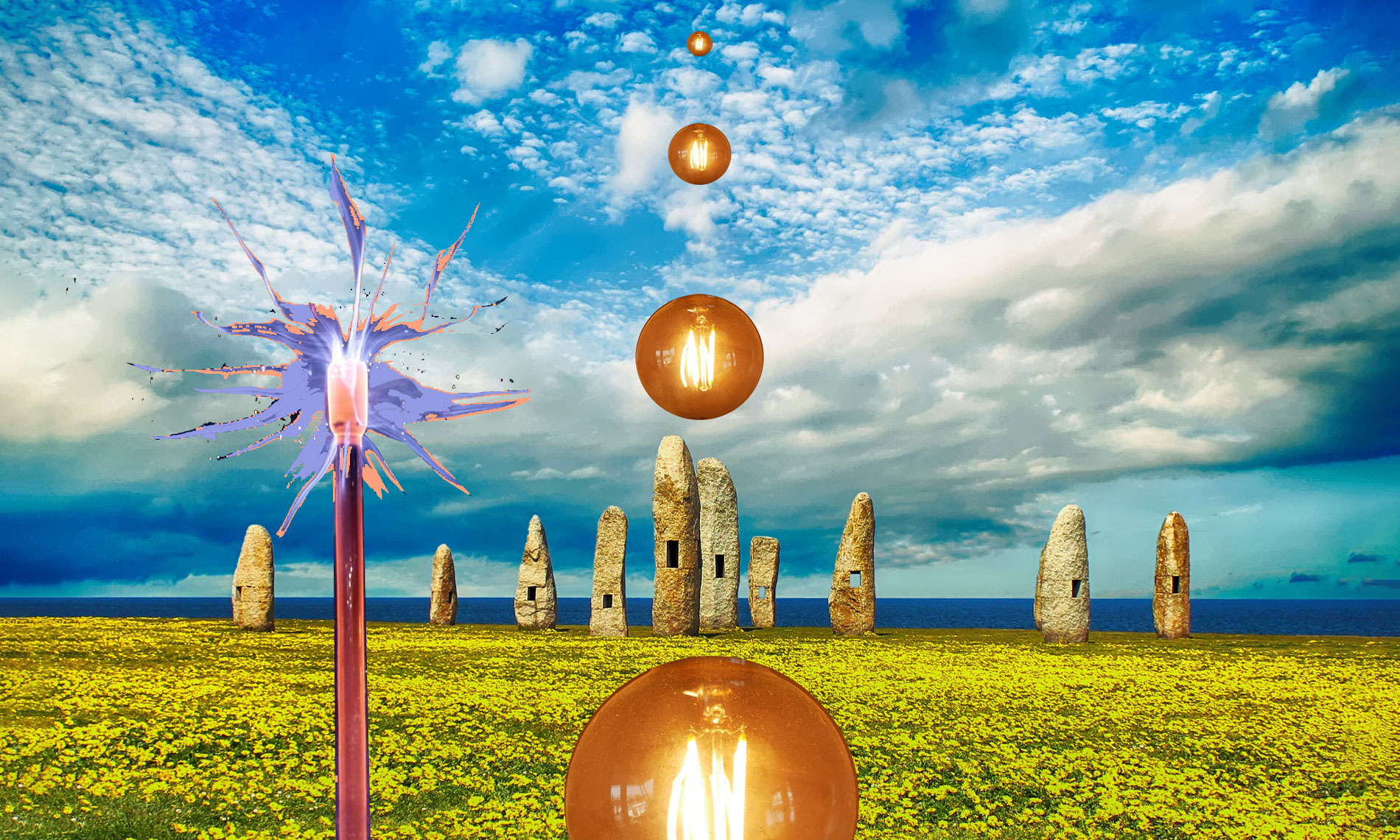 The existence of electric batteries and lamps is attested since ancient times. Thereafter, the secret of the electric power is lost … until recently rediscovered.

In Asia, Africa, Europe or America, the ancient history of electricity is told through texts, but also objects, statues, frescoes, sculptures and bas-reliefs with a wealth of details that could make it a true encyclopaedia of electro-magnetism. With a few nuances … 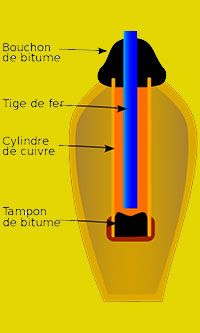 For those who still doubt the distant past of electricity, the battery of Baghdad provides evidence worthy of Saint Thomas. The Baghdad Battery is believed to be about 2000 years old, from the Parthian period.roughly 250 BCE to CE 250

The jar was found in Khujut Rabu just outside Baghdad and is composed of a clay jar with a stopper made of asphalt. Sticking through the asphalt is an iron rod surrounded by a copper cylinder. When filled with vinegar – or any other electrolytic solution – the jar produces about 1.1 volts.

If the ancients knew how to generate electricity with batteries, they also mastered a source of electricity that we persist in neglecting, for some mysterious reason.Believe it or not: our ancestors used atmospheric electricity, or Vril, which has always been free. It exists everywhere, you just need an antenna to pick it up, but it does not mark the electric meter.

In a century where money rules, free energy has no interest. Should we conclude that the “former gods” did not care about money?

Anyway, they were very familiar with lightning: “The temple of Solomon and the library of Alexandria had lightning rods.” (source)Histoire Magazine, July-August 1997

This is true, and the House of Heaven that Gilgamesh built in Uruk had some too. Was it lightning rods or lightning sensors? Formerly, lightning was trapped in order to extract the precious Vril.

The pyramids of Mexico had at their base a layer of mica to prevent this valuable energy to be lost in the soil. Today we usually trap Vril energy in our lightning rods, but we hasten to give it to the earth in spite of our increasing energy needs.

Why? What does it mean?

And this is not only lightning Vril which is neglected.  The brilliant physicist and researcher Nicola Tesla noticed the fact a century ago: “Curiously enough, this energy that arises on all metal surfaces and electrical circuits of the planet, we are rushing to deliver it in the earth, where it dissipates instantly” (source)Nikola Tesla, Memoirs

While we are sold at exorbitant prices electricity from a giga-barrage or a nuclear plant, major sources of environmental pollution. Is it a conspiracy? Is there a ghost in the machine, or a devil in control?

Such an hypothesis is not necessary. The lure of gain is quite sufficient.

“More oddly still, electrical codes for much of the industrialized countries prohibit the use or marketing of an equipment that would use such a source of atmospheric energy.” (source)Nikola Tesla, Memoirs  When it is free, it is illegal. Vultures. If you ever think that you are taken for idiots, you are quite right. Beyond the sordid matter of money, this is a waste that is not only quantitative but also qualitative. The Vril energy is much more than electricity. Quantum physics teaches us that in each transmission of energy, there is transmission of information. What information may well carry our very high voltage lines, deadly, disastrous for the environment and the human psychism?

Leafing through an art book about ancient Egypt, a handyman came across several images that sparked his interest. He immediately identified a generator, as it disassembled and repaired dozens in his life.

He immediately decided to make the gear that operates according to the experiences of a … Nikola Tesla !!! You can see the result of his work on the above picture. This brilliant inventor had theories about atmospheric electricity that suggest, really, conceptions of the gods before the Vril and use. In any case, this electric generator works is further evidence of the ancient electricity.

One may wonder if the seven-branched candlestick, dear to the Jews would not be a copy of this ancient generator? Many ancient technological objects and étépris for religious objects, when their use was forgotten. The rabbis have retained the shape, like Plato with his cave. But the bottom line is gone.

Alfred de Garzia speaks with passion of an ancient Egypt which had a great expertise in atmospheric electricity. The recovery and use of this energy were, like nowadays, under the supervision of an electrical engineer.

According to Garzia, in that distant time, the electrical charges surrounding the earth were much higher than they are today. The pyramid was then wearing the famous capstone in polymetallic alloy, now gone. 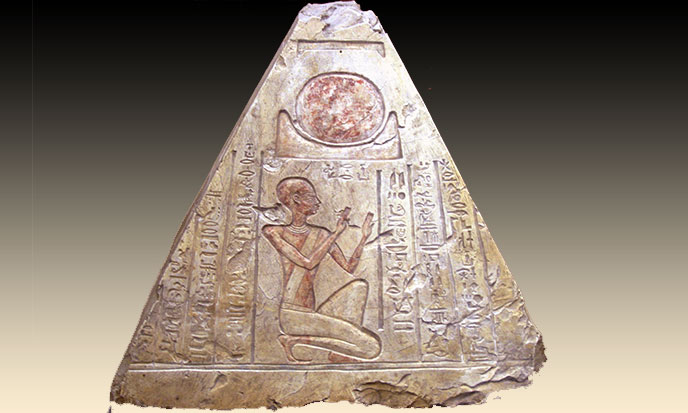 The capstone, antique lightning rod, was used to capture the lightning flashes and to explode them into lightning balls, less dangerous. Ball lightning is the purest form of Vril energy. But there are others: atmospheric energy, which accumulates in all metal surfaces, the geo-energy or subtle energy, produced by the Earth’s rotation.

The capstone was a superconductor in Orichalcum, which was an alloy gold-silver-copper- radium, forgotten today. It was attracting lightning and atmospheric electricity. Electricity followed the gold plates that covered the pyramid, then the metal rods by the famous “ventilating shafts” to the king’s chamber. These ducts are a puzzle: despite their name, they were never used to ventilate the king’s chamber. They were not used either to observe any particular star, no offense to Robert Bauval. Moreover, the use of stone ducts to observe a star seems of doubtful value, especially when you have telescopes.The discovery of ancient burls and objectives in cut crystal leaves no doubt on this point.

So the majority of Egyptologists stick to the assumption of ventilating shafts, for lack of anything better.

A few years ago, a small robot nicknamed UpuautIn ancient Egypt, the god Upuaut was the god who opened the way. Such an appropriate name! was responsible for exploring one of those famous pipes. Halfway down, the little robot has bumped into a stone door which ruins the hypothesis of Bauval. 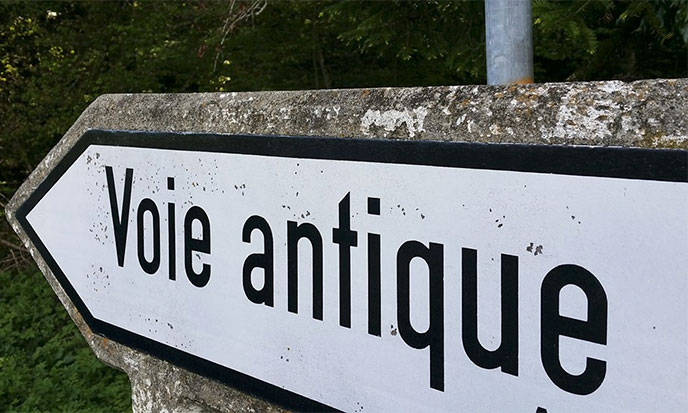 This pseudo-door had two metal rods -scientists in charge of Upuaut program presume to be handles. I assume they are not handles but the remains of metal bars that connected the capstone to the electro-psychic facilities of the king’s chamber. This pseudo-door was an isolator keeping the two bars separate. As mentioned, the Great Pyramid, overlaid with gold, was crowned with a golden capstone too, which caught the lightning flashes. Gold is an excellent conductor. The “ventilation shafts” were actually ducts intended to receive two metal rods loaded with positive and negative current, the “door” being only used to maintain the spacing to avoid a short circuit.

The photo shows that the metal rods have partially melted, probably as a result of an electrical overload. Knowledge and control of atmospheric electricity or Vril look established. Its use still seems banal to the early days of ancient Egypt, as well as flying machines. Then lamps, electric arcs and various devices using vril broke down, no longer no one knew the restart, and it was not until modern times that we “invent” electricity. No, oh no, we’re not the first. And at all levels, without exception, the ancients were better than we are.

Before having been spoilt by those nazis bastards, geo-energy has long been a way of awakening 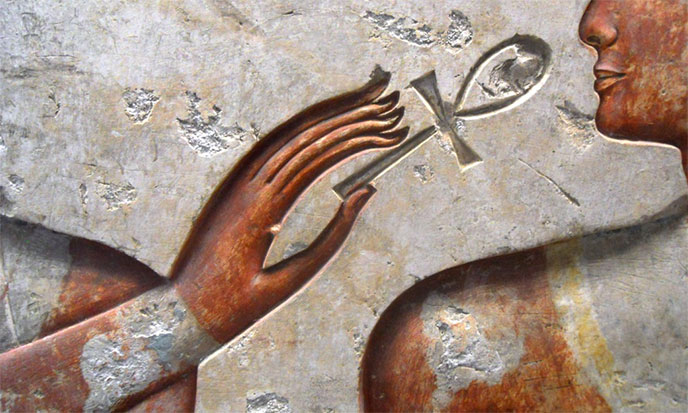