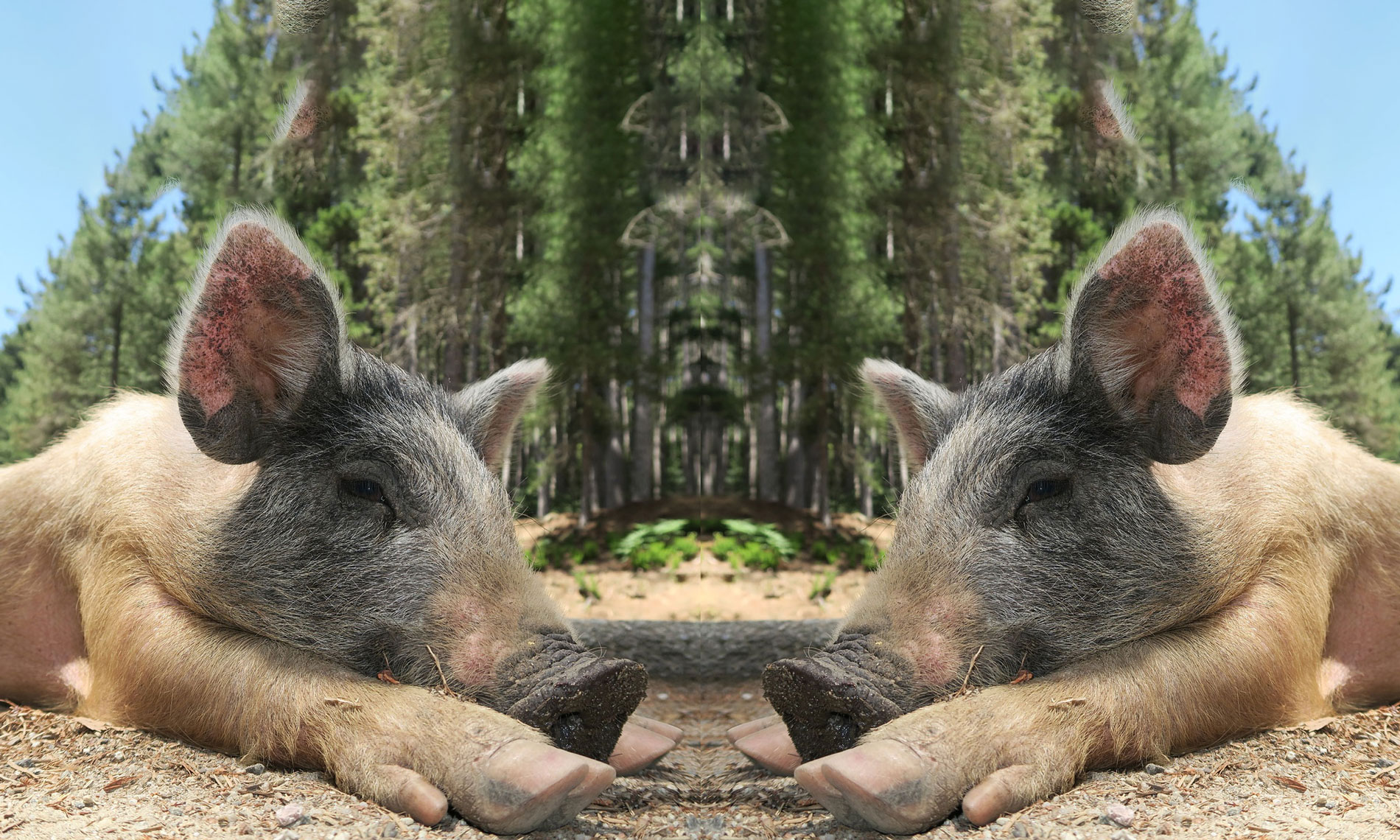 Could man be a close relative of the monkey? Instead, is the monkey a degenerate man? Both theories use the same arguments. Those who remember they come from the Light choose the latter hypothesis.

Remember that to Lamarck and Darwin, human and ape descended from a common ancestor. But this thesis is thoroughly discussed. According to Darwin anyway, the simianie apelike origin of the man is little doubt. Following him, science has classified human being in the family of primates, or apes. For the Biblical creationists, it’s a blasphemy. For the New Age spiritualists, it’s an aberration: how to forget we are lightborn and forever light? “For you are light, issued from light, et through you everything was done.”

But leave some as the others aside for now because there are worse than monkeys. According to some authorsSee below, man could come from the pig! Thanks to them for this rewarding idea. They are: Veyron and Rochette, Edmond le cochon – Joann Sfar, Les Potamoks – Gilbert Shelton, Warhog Man – Bernard Werber, Le Père de nos pères – and others …

Let’s try to discuss the issue with appropriate humor. What other animal has a skin so close to ours, slightly hairy, covering all shades of human skin?

Oddly enough actually, from the warthog to the Chinese pig, pork skin turns from pink to brown and yellow to black, depending on the latitude, exactly like ours. This phenomenon appears to be limited to these two species, pigs’ and ours.

Another thing: if we came from monkeys, where has our fur gone? American scientist Desmond Morris wrote a best-seller in the 70’s, The Naked Ape, an essay dealing with the descent and origin of Man. He said we have lost our hair turning back to water element after a great cataclysm that raised the sea level. Thus we would have strong emotional bond with our cousins, dolphins, and they still remember when we swam together.

Desmond Morris is not alone in believing that man is back in the water. Elaine Morgan said it was paddling near the shore that we learned to stand. For her part, the U.S. anthropologist Margaret Mead shares a similar viewpoint.

But let us return to our pigs. In pharmacology, when it comes to test substances, the relationship of human’s and pork’s response is well known. However, it does not come from our genetic, but another factor, largely unexplained, which standardizes the metabolic processes of both species.

Should we see another argument for the thesis of our ancestor pig?

Turn now to another subject: where these Jewish and Muslim dietary laws do they come from, which prohibit entirely the consumption of pork? The historical reason for this taboo is hygienic as it is said in most comments. Let’s admit it, since everyone says it… But the ban hanging over the pork meat is striking relief when we consider that the pig is our “mother”. Another sign we all know the real pig heads literally as figuratively. Is it because we have it some of us have kept his bad temper? And then we all found that some uniforms can make man a real pig. As every woman knows, in every man there is a feelthy pig.

So we would not be the sons of the bonobo … Not only. Hard to swallow. Yet a question arises: the man has 99% of genes in common with chimpanzees and much less with the pork. This could be because the genetics of all humanoids reasonable is compatible, regardless the origin of their animal lineage. “Everything that rises converges,” ClaudelFrench poet and writer from the first part of 20th century. said. Thus, the chimpanzee very close to the status of reasonable humanoid would have more genetic similarity to us than we have with our animal prototype, ie the pig.

It should also be noted that the human embryo during its development, has up to seven pairs of breasts on the chest and belly, like pork. We know that monkeys, like us, have only two on the chest. So ? Could these many embryo breasts be a trace of our swine lineage?

Enough nonsense! Our common points with the pork is indisputable indeed – so is our kinship with all animals! Many traditions present the human being as a crossroad between the angel and the beast. It is as if we were the standard meter that measures all the fauna of this planet. “Man gave name to all the animals” Genesis says.and Bob Dylan sings Named … or shaped? ie manufactured in man’s image?

Before you click to another page, one last absurd idea crossed my mind. If the good old giants, our designers, have put pig genes in us, that could not be just to encourage us to grow and multiply.Otherwise they would have put rabbit genes.  These pig genes have a useful purpose, but which one? In the hypothesis that a nuclear war would have ended their civilization, one of the worst threats to the survival of our species, they said, was to be the atomic peril. Could they have protected us against that?

As I was ruminating on this crazy idea, I came across the story of the pig 311. An old story that will delight aesthetes and reconcile us with the entire porcine race, if not with the soldiers. Prior to the atomic experience of Bikini, the Americans had exposed to atomic radiation different animals for scientific progress. Among the creatures subjected to irradiation -monkeys, rabbits, guinea pigs, goats- was a pig registered on number 311.

Parked in an old warship, the pig 311 was thrown overboard by the explosion. Swam out to the atoll, and shortly thereafter, was collected and subject to a deep examination. The other animals were irradiated, dead or condemned to death. Alone of all the control animals, the pig 311 was unhurt, without reasonable explanation. He lived long and had a very normal procreation. (source)André Maurois, Nouveaux discours du Docteur O’Grad

We assume that the pig is protected against rads, making it our best hope for the future. At the same time, the soldiers had also exposed to radiation few wild people without registering them. We therefore do not know if they lived long and procreated in the normal way.

Only what is fantastic is likely to be true. (Pierre Teilhard de Chardin)

Take someone who doesn’t keep score, who’s not looking to be richer, or afraid of losing, who has not the slightest interest even in his own personality: he’s free.