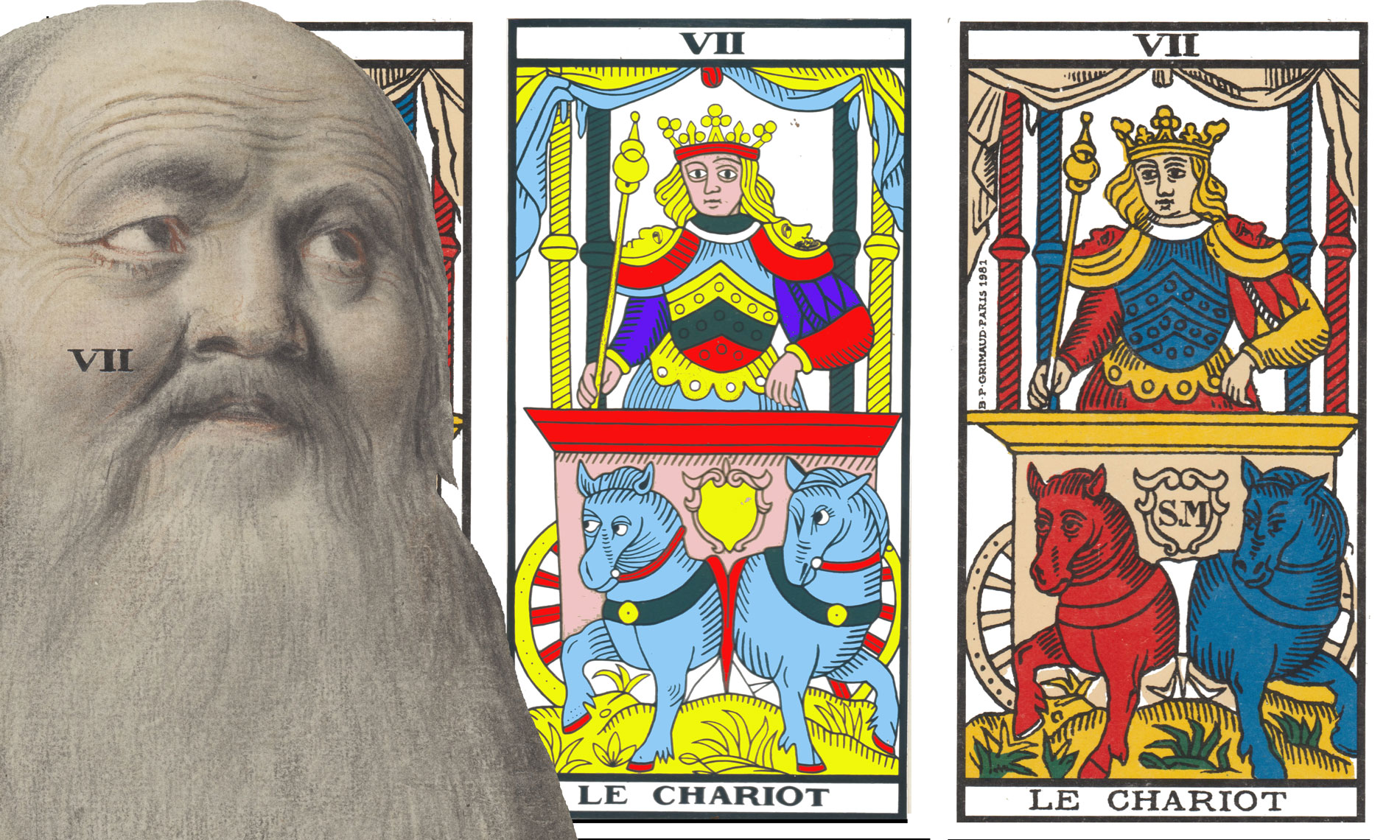 Plato is the most respectable of ancient philosophers. Did I say respectable? I should have said respected … I have already had the opportunity to criticize his myth of the cave, which in my opinion is misunderstood.

The logos and the heaven of intelligibles, other misunderstandings of the old Greek sage. Everything happens as if Plato had received a very old education, very technical, to which he would not have got everything. Without context, no doubt. Plato and the Tarot? Filiation dared, but why not? Yes, all right, this title feels the provoc … Once is not custom.It is! I do love provocation. All the time. It wakes up. Besides, the idea is not mine. I’m jealous, so much I could have had it. I love to spoof the dear old master who made me sweat when I used my jeans on the university benches. But here it is written by another and discovered by a third, my dear Nef, many thanks to her.

The chariot of the soul

Perfectly documented, beautiful presentation, a website explains why and how the thought of the Greek philosopher is found as such in the cards of a bistro game invented and drawn nineteen centuries later. I will not repeat his arguments, read it instead. I will content myself with taking one of the examples he gives, the arcane VII THE CHARIOT. This author uses the Tarot of Nicolas Conver — not the images that were restored by Marteau and published by Grimaud, rather the genuine ones as restored by Flornoy. This is the most common initiatory tarot, although, for my part, I much prefer the version of Jean Dodal. But with the major arcana of Dodal, the parallel with Plato would have been less convincing …

As an appetizer, here are some parallels that this author has found. Fascinating and disturbing. “No less than twelve assets of the tarot of Marseilles seem to allude to writings of Plato. […] In the Phaedrus, Plato had compared the idea of ​​the soul to a chariot towed by two horses and directed by a driver. in the human soul, he added, one of the animals is prone to pull up, the other down, which makes it very difficult for the driver (source).”   Yeah … Except that on the arcane VII, a horse pulls on the right, the other on the left. Nevertheless, it deserves to be lingered. 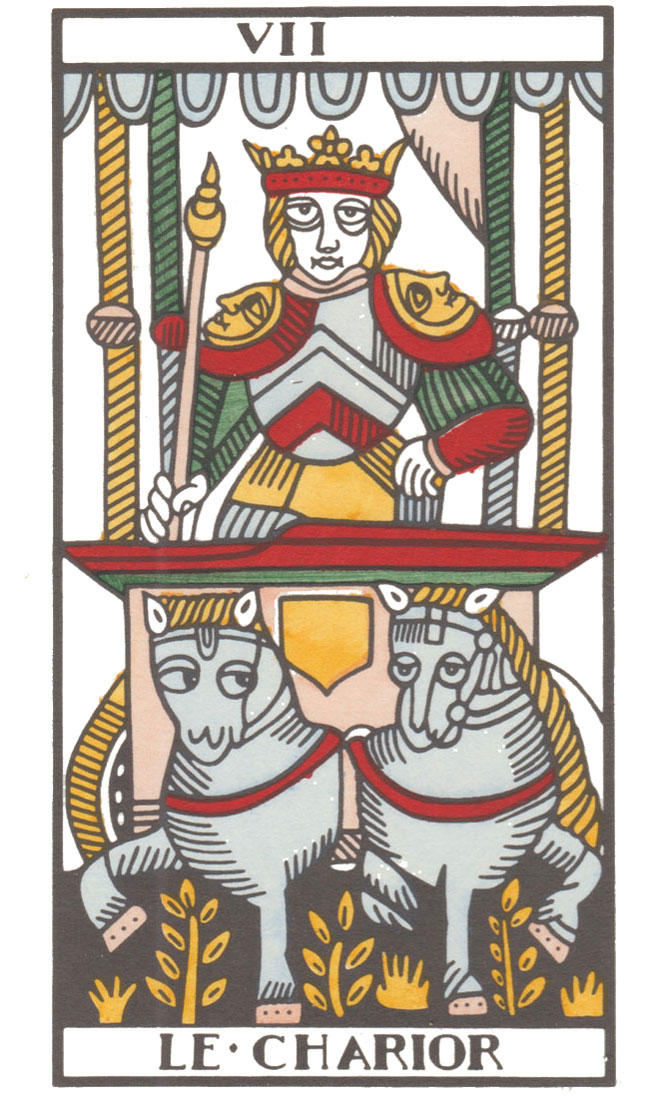 This tiny detail excepted, we get a perfect description of the arcana VII THE CHARIOT… in the version of Nicolas Conver: “The map of the Chariot contains all the constitutive elements of the chariot of the soul of Plato: the vehicle, the driver and the two antagonistic horses, as if the designer of this image had sought to transpose in the map the description of the philosopher of Athens  (source).”

And when the same site details what the arcane gives to see, we only know how to admire the most, the style and the vocabulary, or the finesse of the observation: “Of the two horses, one is good, but the other is not […] The one who is in better condition, who is of decent proportions and well decoupled, who has the high neck, a chamfer of a slight curve, clear of dress and the eyes black, […] let himself be led without the coachman strikes him, only by the encouragement of him and his voice.The other, conversely, is badly turned, massive, strong, we do not know how: the neckline heavy, with a short neck, a camard mask, a dark robe and clear eyes, not badly injected with blood, a companion of excess and boasting, a fleece in the ears, dull, barely docile to whip and spikes (source).”

I like the style, I like the subject, I like the expression. Now do you think the analogy could have been just as good with any cart picture? No way, and that’s the weakness of this comparison. If one takes as a model the tarot of Jean Dodal, more recent than the Conver, or the tarot of the Visconti, older, the analogy with the text of Plato becomes more difficult, even impossible.

On the other hand, Nef noted that the cardinal virtues identified by Plato in the Republic are also present in the Tarot: Hermit caution, Temperance, Strength (soul) and Justice. Is it still a coincidence, which as everyone knows does not exist? The master cartiers were educated for the most part they knew Plato, nothing prevents that they wanted to pay tribute to the great philosopher. But I do not forget that in the 18th century, when these tarots were drawn, the ancient philosopher in fashion was the great rival of Plato, Aristotle. So must we see in the Platonic allusions a conservative way of protesting against the far-fetched ideas of the newcomer, Aristotle? The quarrel has shared the escholiers and scholars for decades, it would be no surprise that it has emulated even to the masters. On this account, it would be necessary to see if a wink to Aristotle did not enameled other tarots, I think of my favorite, that of Jean Dodal, which I will speak to you very soon. To be continued.

Here. I wanted to give you these reflections, because the analysis of my dear friend the master cartier Flornoy, that I took again, gives the Chariot a very different image …