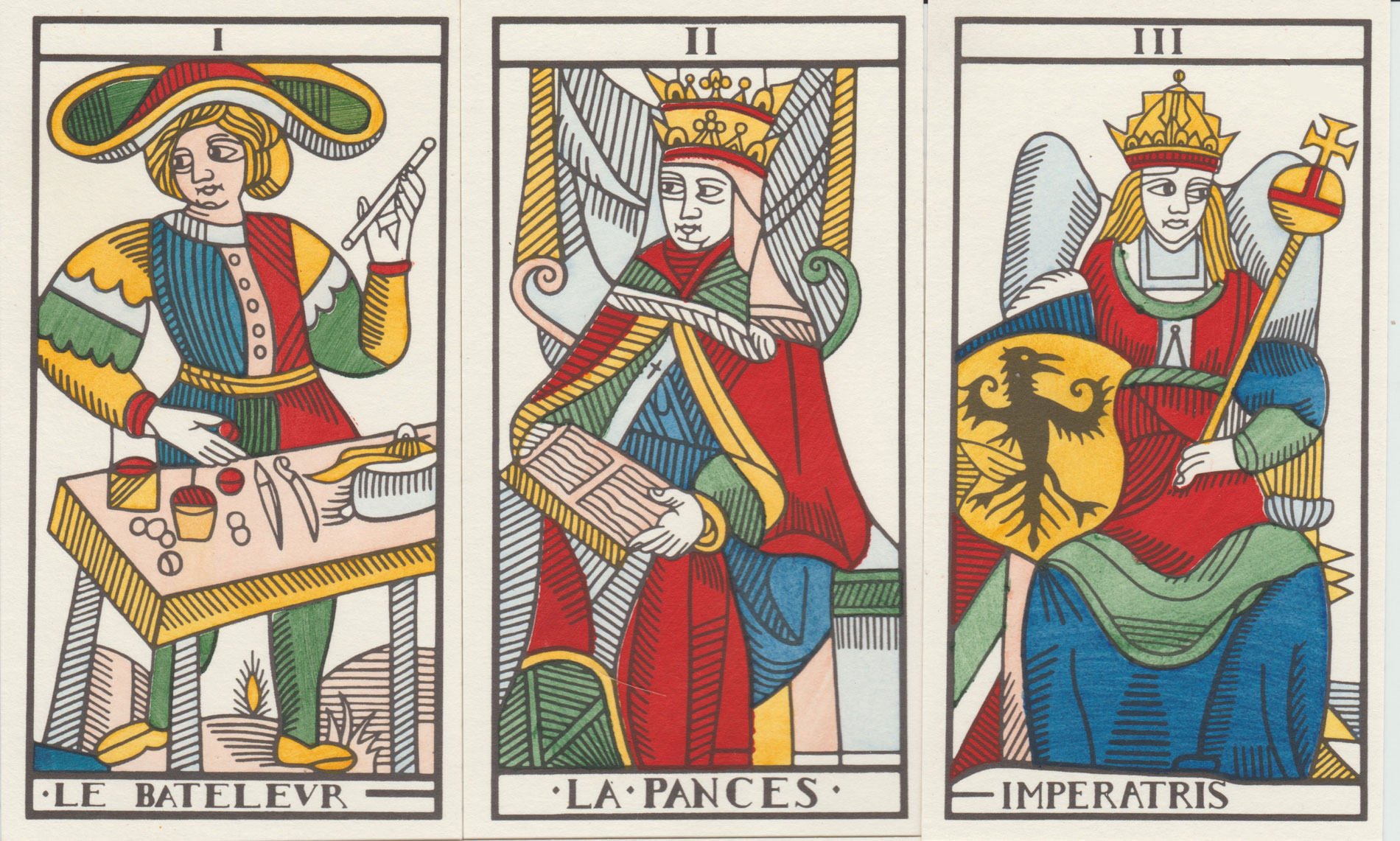 Many things have been written on the divinatory tarot, which is also called the Tarot of Marseille. I worked a lot on these playing cards, which for centuries went from hand to hand in the gambling dens, like an honest gambling game. The simple people who played it with passion gave Tarot, in addition to its sacred character, a historical and social status which classifies it as a world heritage of initiatory culture.

The tarot of Marseille has been interpreted in many ways. My favorite is that of Jean-Claude Flornoy, who considers Tarot a digest of our personal history. According to him, the twenty-two major arcana describe the twenty-two stages of human life. Yours like mine. I know, it is a pain in the ass. You would like to be different. You would like it to talk about others, but not about you. Listen. Each of us will live these stages willy-nilly during his life. You too – whether you like it or not. All stages if one reaches the state of Buddha (arcana the Fool), or only a few if one’s life is not long enough or one’s efforts are insufficient. In tribute to Jean-Claude Flornoy disappeared in 2011, this article shows Flornoy version of Jean Dodal tarot, patiently and scrupulously restored from the original preserved at the National Library.Bibliothèque Nationale de France

The philosophers distinguish two stories that they claim are mirrored: the history of the individual and the history of the species, in scientific language: ontogenesis and phylogenesis. I always have in mind this punch line of my philosophy teacher: ontogeny recapitulates phylogeny (source). Wait, I translate. Our personal stories, yours, mine, the story of each individual reproduces the histoiry of one’s lineage. To verify this beautiful philosophical hypothesis, I sought to see to what extent the major mysteries that tell us could also tell the story of our species. To my surprise, it sticks serious. Not the hackneyed history of textbooks, no, it sticks to the real thing. It sticks with the other story, the one I tell you for ten years in the saga of Eden. Judge instead.

I THE MAGICIAN represents the dawn of the fifth humanity, ours. A mountebank is a public entertainer, a forager without fire or place. Thus was born today humanity. Adam was created to distract the gods our creators. The first humans were slaves, sex toys and fools of the king. The question is, are we something else?

II THE HIGH PRIESTESS represents a druidess, it is the first epoch of our humanity, the origin of the matriarchy which ruled the human planet during many millennia. The age of the Great Goddess is the golden age of a peaceful period when feminine power was maternal. This has been the reign of Hera, Hathor, Isis and the gift she gives of enlightenment to all humanity. Please note that Jean Dodal writes LA PANCES instead of LA PAPESSE. Allusion to the god Pan? Or a way to indicate that the High Priestess, erudite with a book on her knees, also knows how to use the intelligence of the belly –French: la panse …

III THE EMPRESS is the second epoch, the triumphant matriarchy, but also the hardening of power, the females authoritarianism with female elite troops, the Amazons who track down the males. 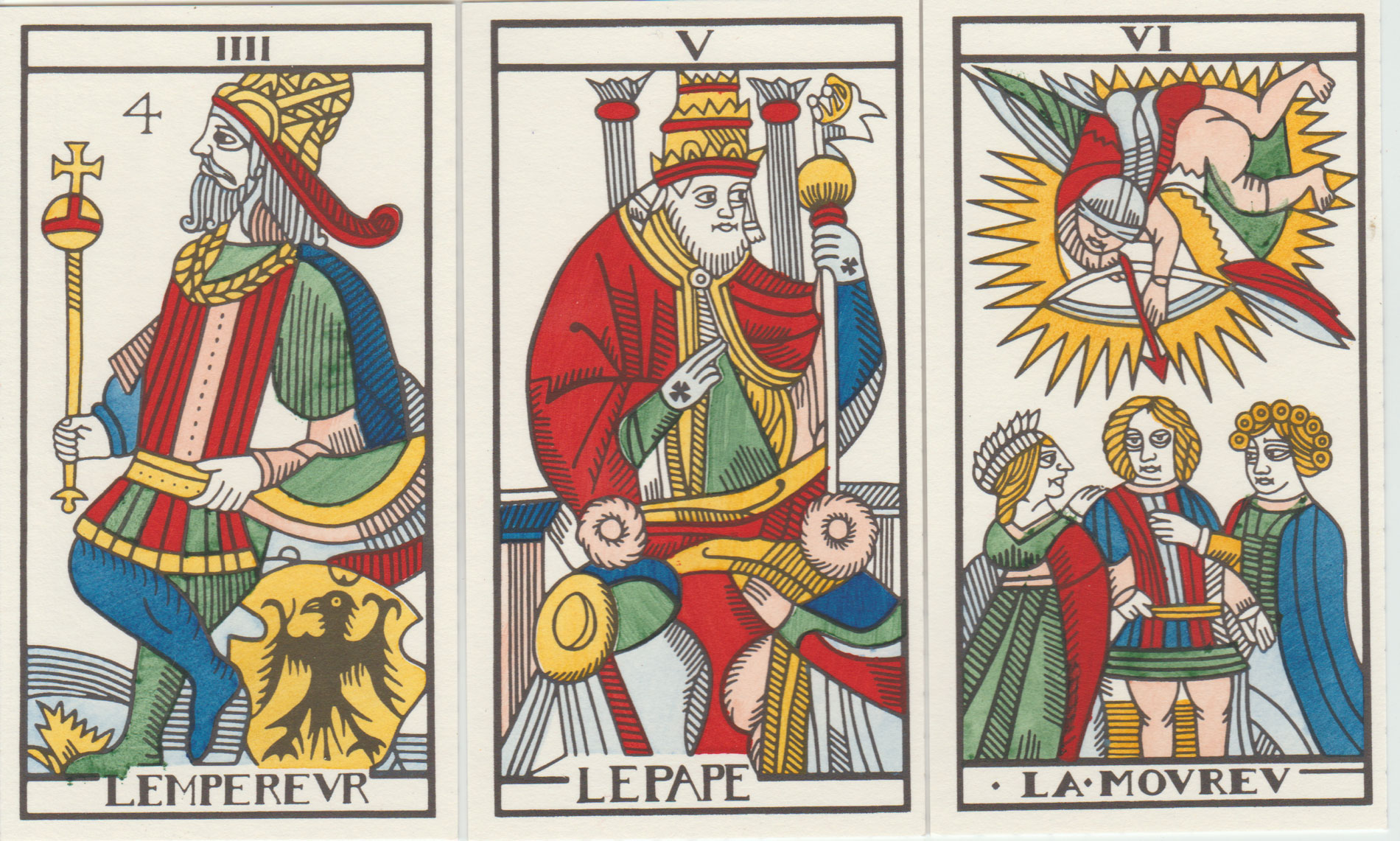 IV THE EMPEROR is Rama the conqueror, first planetary emperor. Embodying the revenge of the male sex, or rather the rebalancing of the two sexes, Rama has achieved the unification of Europe, Africa, Asia and the Americas under the same law, the same religion and the same social structures, some of which still exist, even though the name of Rama has been forgotten in the West.

V THE HIEROPHANT is another face of Rama who became, at the end of life, Lama the wise Buddha in the mountains of Tibet. It is the triumph of the Law of Rama that becomes the gospel of enlightenment across four continents. He has done his best to reconcile the two sexes –unsuccessfully since the males, traumatized by the memory of the Empress and the exactions of her Amazons, want at all costs to ensure domination over women.

VI THE LOVER is the successor of Rama, Orpheus the musician poet, the believed inventor of the lyre. Western version of Krishna the magic flute player, Orpheus will become the god of the gods, third successor of Zeus – or rather of Zeus wife Hera (Anna, Anu). Like Rama, Orpheus will also reign over an empire grouping the main nations of the Earth: Europe, Asia, Africa and the Americas. But Orpheus the poet does not have enough grip to prevent the tutelage of a dominant macho ideology appeared under the reign of Pope Lama. 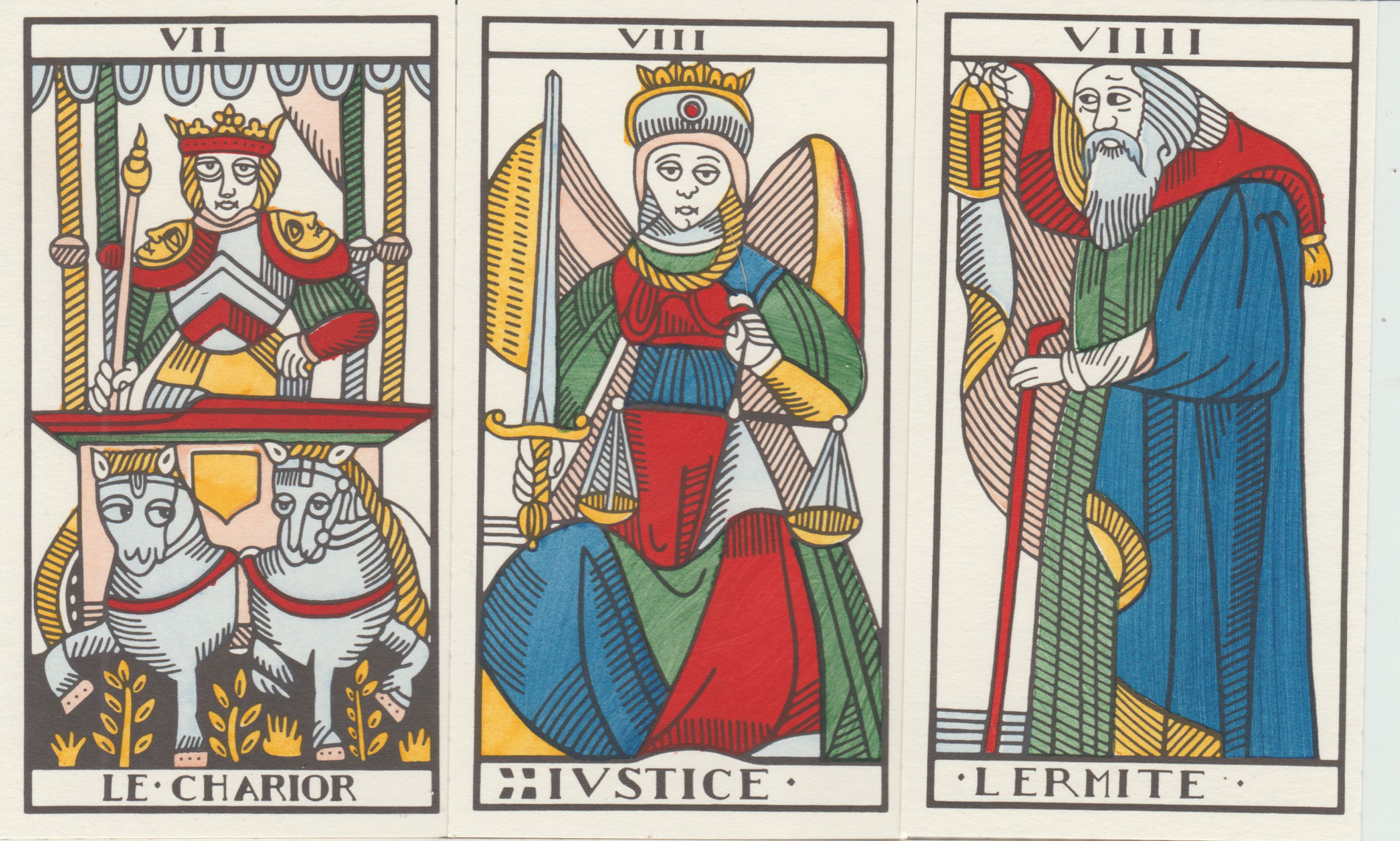 VII THE CHARIOT: is Atlas at the helm of the chariot of the gods, the gigantic ship-Atlantis island, which missed his takeoff and fell heavily into the Atlantic Ocean, causing the devastation of the Flood. Please note that Jean Dodal did not spell CHARIOT, but CHARIOR. Is it to point the origin of the chariot of the gods: OR, UR, ie the star Alcor in the Big Dipper, in Latin URsa majOR.

VIII JUSTICE: The Flood has been lived by humans as divine justice, while it was a great injustice: the error of God Atlas caused a 4 km high tsunami. The shores of Americas, Europe and West Africa have been hit hard. Very few survivors, but lots of corpses and missing persons. A dark age is emerging for humans abandoned by the Gods.

VIIII THE HERMIT: On the Atlantic coasts of the two continents, the survivors of the Flood who go through a long episode à la Mad Max. Europe is becoming wild again for several millennia, waiting to be civilized by much more advanced American colonists. 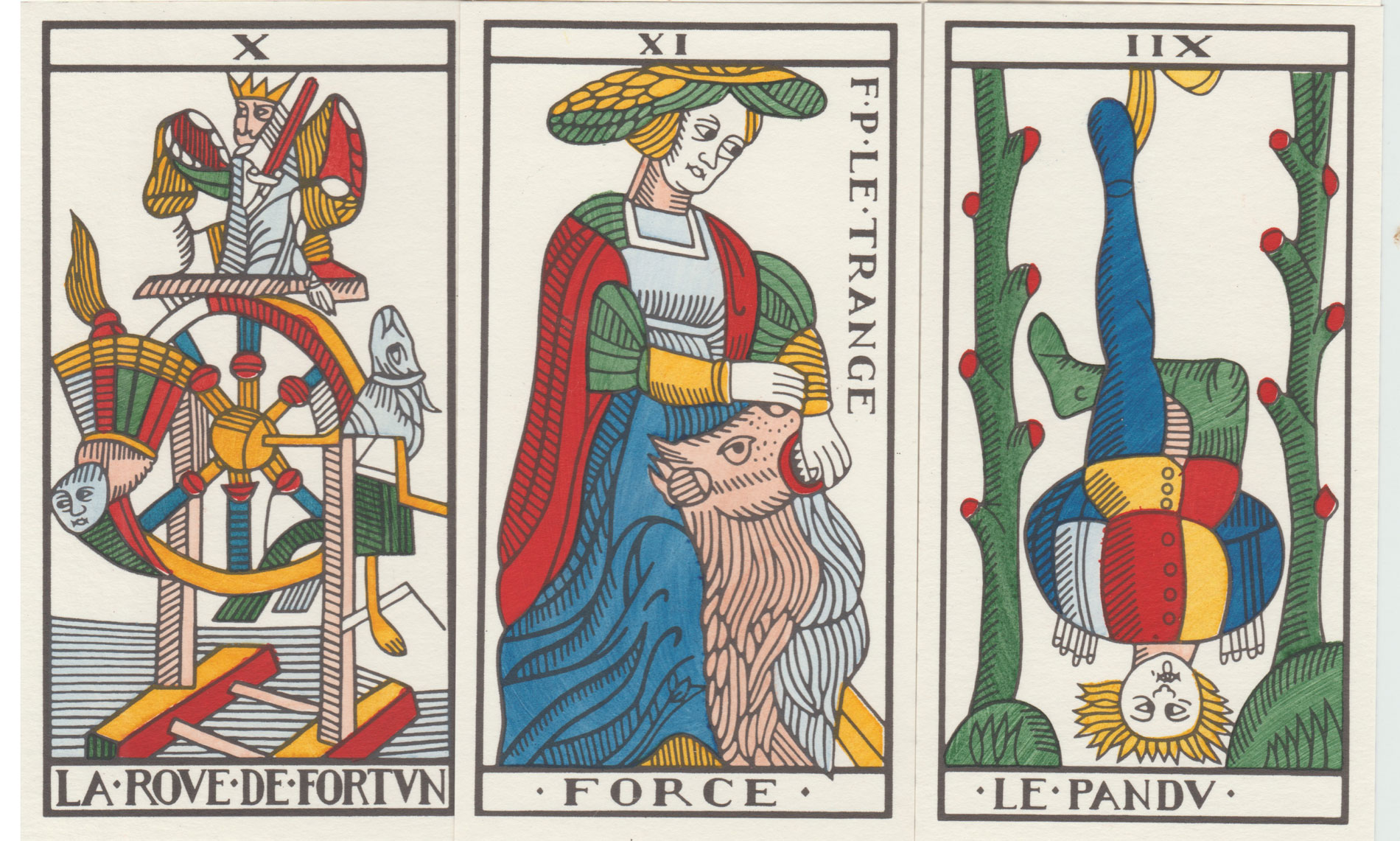 X THE WHEEL OF FORTUNE Or fortune thanks to the wheel. The miseries of humans will be fabulously relieved by the invention (or rediscovery?) Of the wheel. The stricken economy has returned thanks to a reviving agriculture and trade facilitated by trolleys. But the political power is fragile: an endless series of wrens will succeed on the mini-thrones of a shattered planetary empire. Big beasts and African cats have invaded the wilderness of a fragile Europe.

XI STRENGTH: A woman regains power with the kinglets. Thanks to the remains of the arsenal of the gods, it imposes order in the remains of the planetary empire. Wild beasts and large mammals are eradicated by force. We can say that it is the return of the empress, that is called Isis, Dana or Anna … The name of this planetary empress is forgotten, erased by the male power probably because she made resurrect very bad memories in all supporters of patriarchy.

XII THE HANGED MAN It is the dendrites Dyonisos, an ancient Christ who was hanged on a tree. He strongly inspired the fable of Jesus. Judge: Dyonisos was born of a virgin on December 25, and as a holy child he was placed in a manger. As an itinerant teacher, he performed miracles. In a triumphal procession, he rode a donkey. A sacred king, he was killed and eaten during a Eucharistic ritual to bring fruitfulness and purification. He rose from the dead on March 25th. God of wine, Dyonisos changed the water into wine. He was called the King of Kings and the God of the Gods. He was regarded as the only son, the savior, the bearer of sin, the anointed, the alpha and the omega. It was identified with a sheep and a lamb. His sacrificial title of “Dendrites” or “young man of the tree” indicates that he was hanged on a tree or crucified (source). 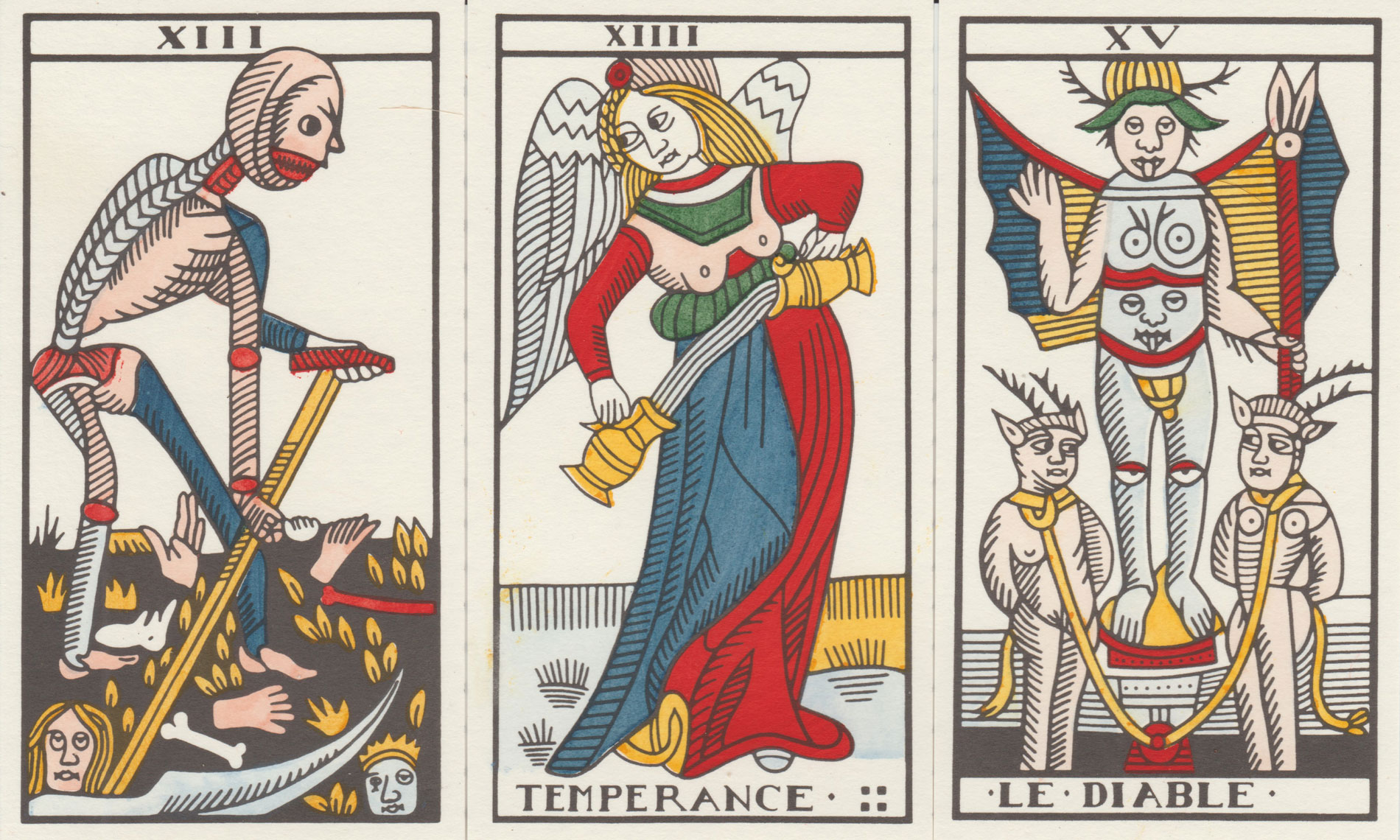 XIII DEATH –French nameless arcana– is a massacre that evokes the second deluge, dated 2500 BC, which caused earthquakes and volcanic eruptions of such violence that we could believe the whole earth on fire . According to Velikowski, this catastrophe was caused by the outbreak of a large comet in the solar system, which will stabilize between Earth and Mercury, becoming the planet Venus, falsely named the star of the Shepherd.

XIIII TEMPERANCE The deluge of – 2500 caused such ravages that the rescued humans mistook it for divine punishment … and no doubt it was one! Like the great deluge of – 10500 caused by the fall of the ship Atlantis in the ocean, that of – 2500 does not come from a comet, as Velikowski believes, but the irruption of a gigantic mothership, Hyperborea .

XV THE DEVIL Could he be God Baal? The episode would occur at the time of Moses, to whom Yahveh gives the explicit order to deny Baal, whose name comes from Bel or Belenos the Aries Celtic, himself avatar of the young Rama, son of Hyperborea, who lived in Celtie and was called Ramos the Shepherd. With Moses, a new religion is taking place, monotheism. She was quick to transform the god from before into a new devil. So do the new religions to dethrone the old beliefs. So did our Christian missionaries to eradicate the animist and fetishistic practices of the savages … it’s called the blessings of civilization, my dear friends. 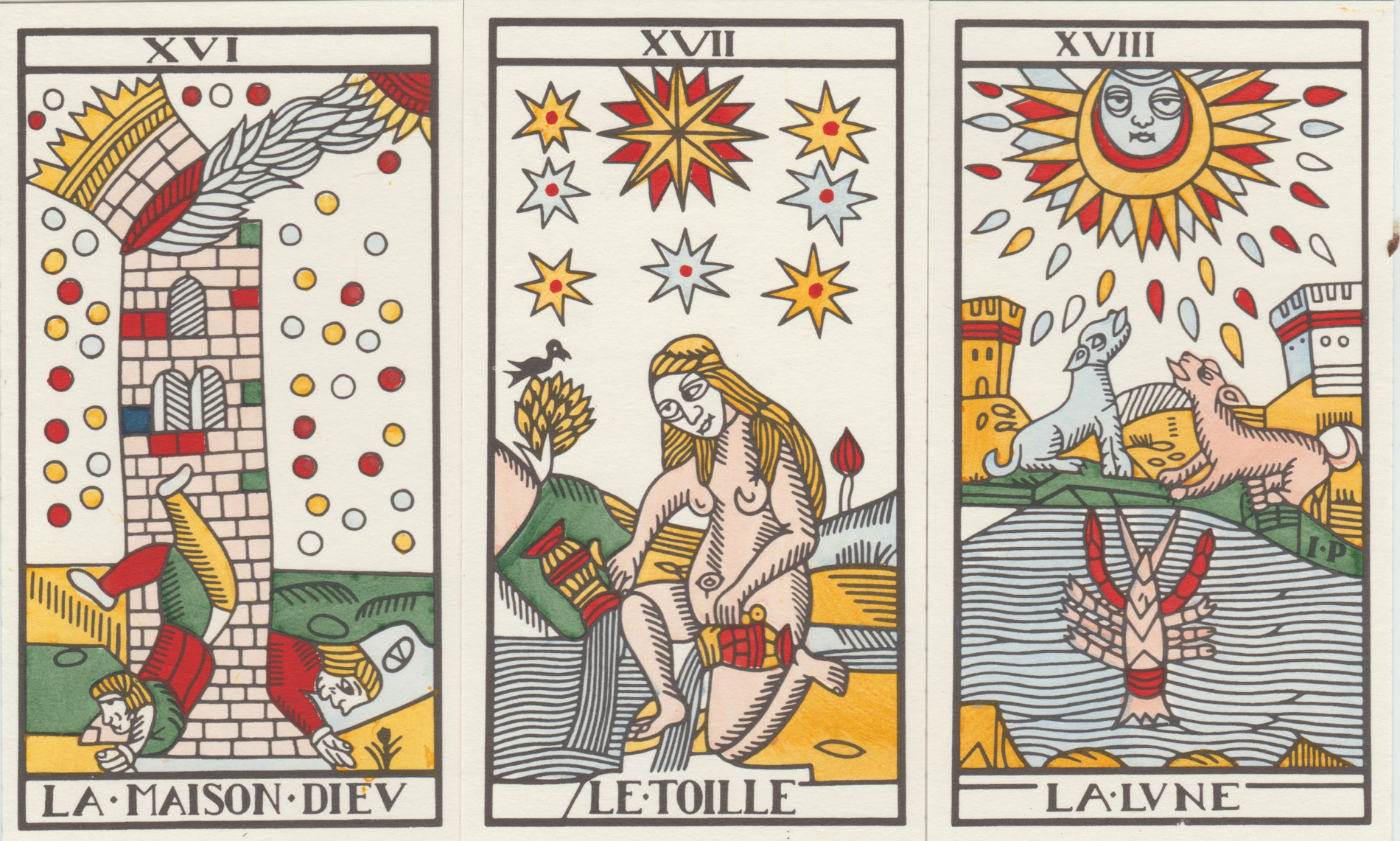 XVII The STAR of the Magi in Bethlehem, birth of Jesus as the start of Christianity. It is the 1st century of the common era.

XVIII THE MOON to the cradle crescent is the birth of Islam in the 6th century AD. It is also the last arcane that describes our past. After begins the unknown … 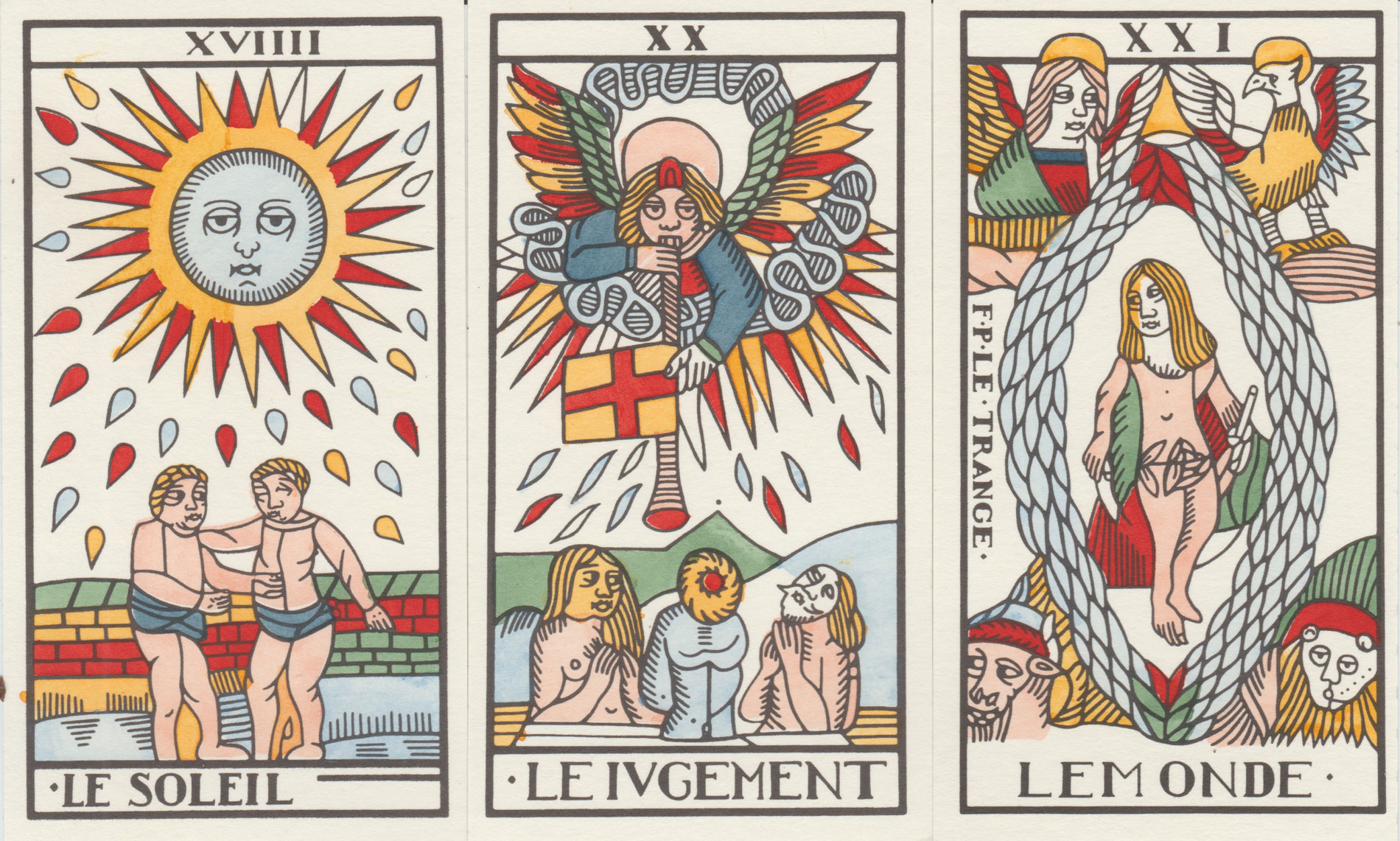 Here we are, my darlings. The sequel is still in the future. Note that it is not very long: this humanity, the fifth, has more to live only three numbered arcana, above and the arcane number-against which can intervene at any time, as the excuse of the tarot game. 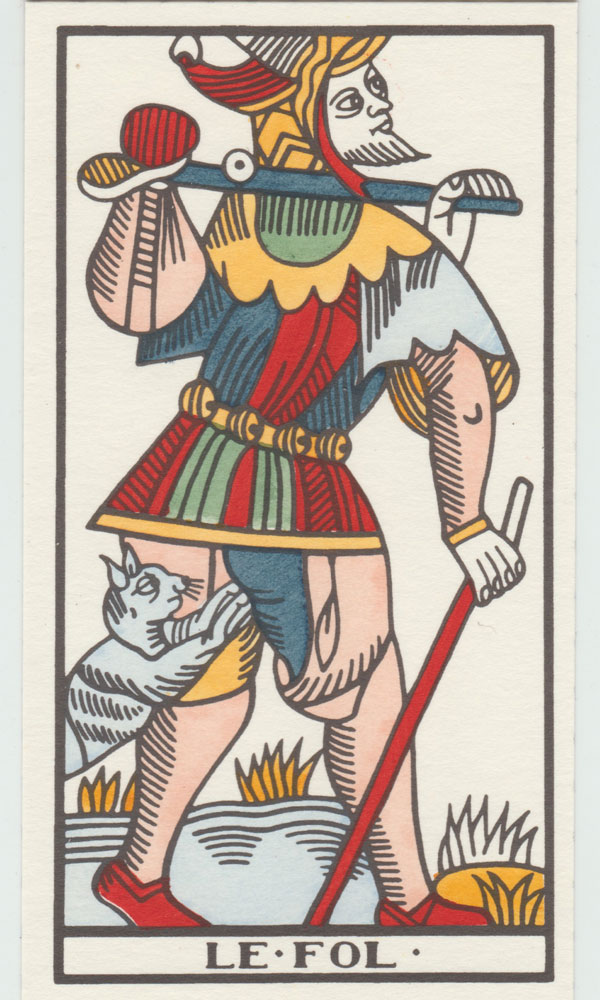 XVIIII THE SUN Return of Hyperborea. A second sun, much bigger, much brighter than the first, will illuminate the sky with its unbearable brilliance. It is an artificial star. It is the gigantic mother ship that brings back the gods from before, or their successors … or impostors! These giants are transformists, they can take any appearance, divine, human or animal. Will they appear to us under the features of the principal gods we still adore here? It would be good war.

XX THE JUDGMENT last, if we believe the Bible, it is the return of the Master of the field which separates the wheat from the chaff. According to the Christian tradition. It can be something else, like a kind of catch-up class for those who are not up to date.

XXI THE WORLD, ie the future world which will see harmony and love reigning among humans, the gods and the animals. It is the return of the two paradises, first the earthly paradise that will see a cleansed planet change into a garden and second the heavenly paradise in the giant sun that dominates our planet with all its mass, this planet-ship where the gods live.

THE FOOL represents, according to Flornoy’s reading, the end of the cycle of reincarnations. Buddhists speak of nirvana, awakening, karmic liberation. For Buddhists as for tarologists, this karmic liberation is individual. In a version extended to humanity, this liberation could be global. The idea is that all humans will access together the state of Buddha. This would be the beginning of a new cycle, which is why the Mat looks like the Bateleur. And that’s why we can not give him a number: he no longer belongs to this cycle.

If Christianity had been arrested in its growth by some mortal disease, the world would have been mithraic.