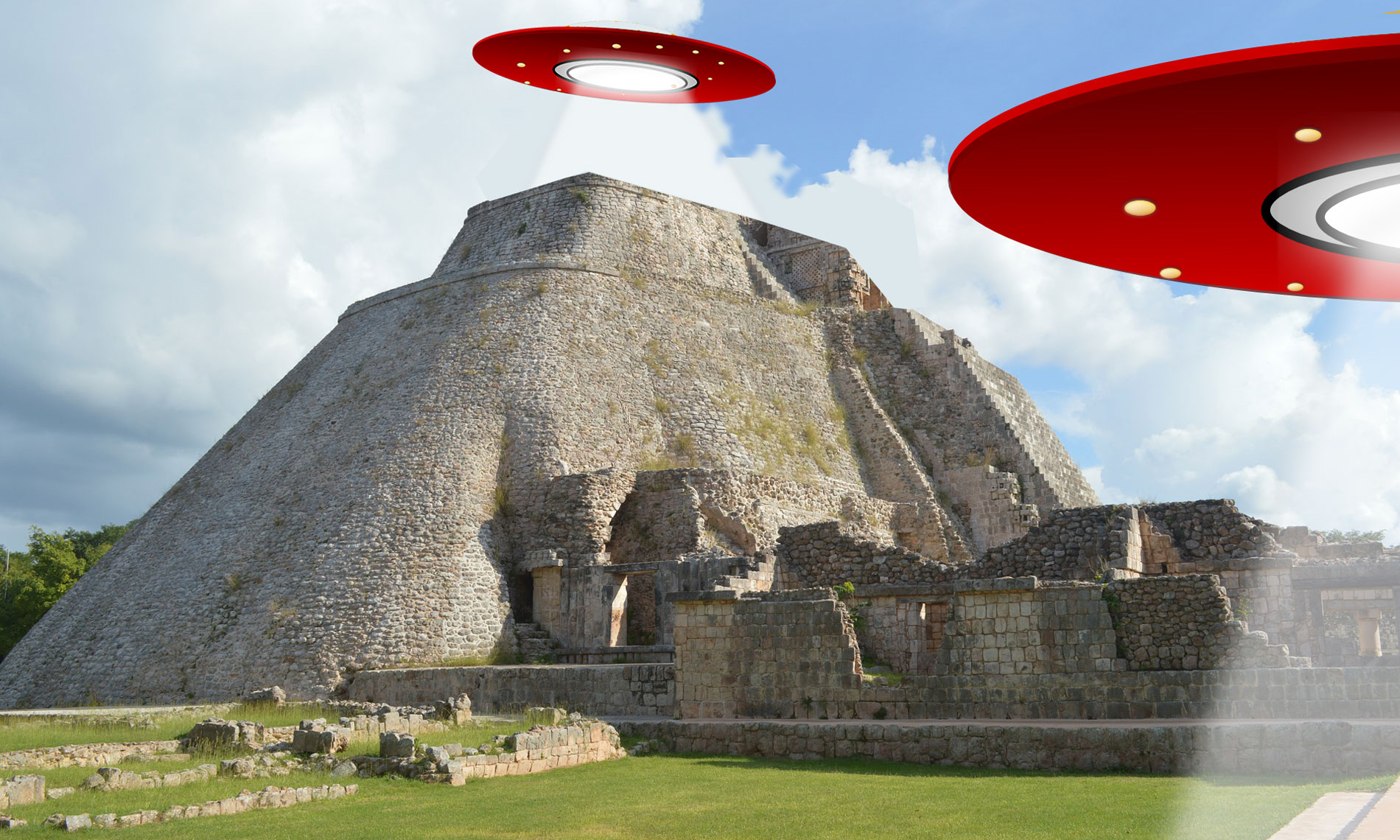 There exists in the East a still tenacious legend which lends to the great biblical king the use of a flying machine called the aircraft of Solomon. And this type of gear needed high runways called Solomon’s thrones.

According to the Kebra Nagast, King Solomon visited his son Menelik King of Ethiopia by flying in a “celestial car”: “The king and all who obeyed him flew on a cart without pain or suffering, without sweat or strain, and traversed in one day the distance than we do in three months (on foot).” On the other hand, “the entire Middle East, to Kashmir, is dotted with mountains called “thrones of Solomon”, as the Takht-i-Suleiman (Throne of Solomon) that raises its flat top in the north-western Iran, which has been conjectured that they have been used as airstrips for Solomon’s aircraft.” (source)David Childress, Gods’ Technology

Not only the flattened mountains served as an airstrip for ancient craft. I think most of the pyramids have been built for this purpose, especially in Central America. Mayan pyramids have long served as landing strips for divine devices. The summit temples were built well after the bottom. They are made of smaller blocks, less well adjusted. Masonry is not so perfect. 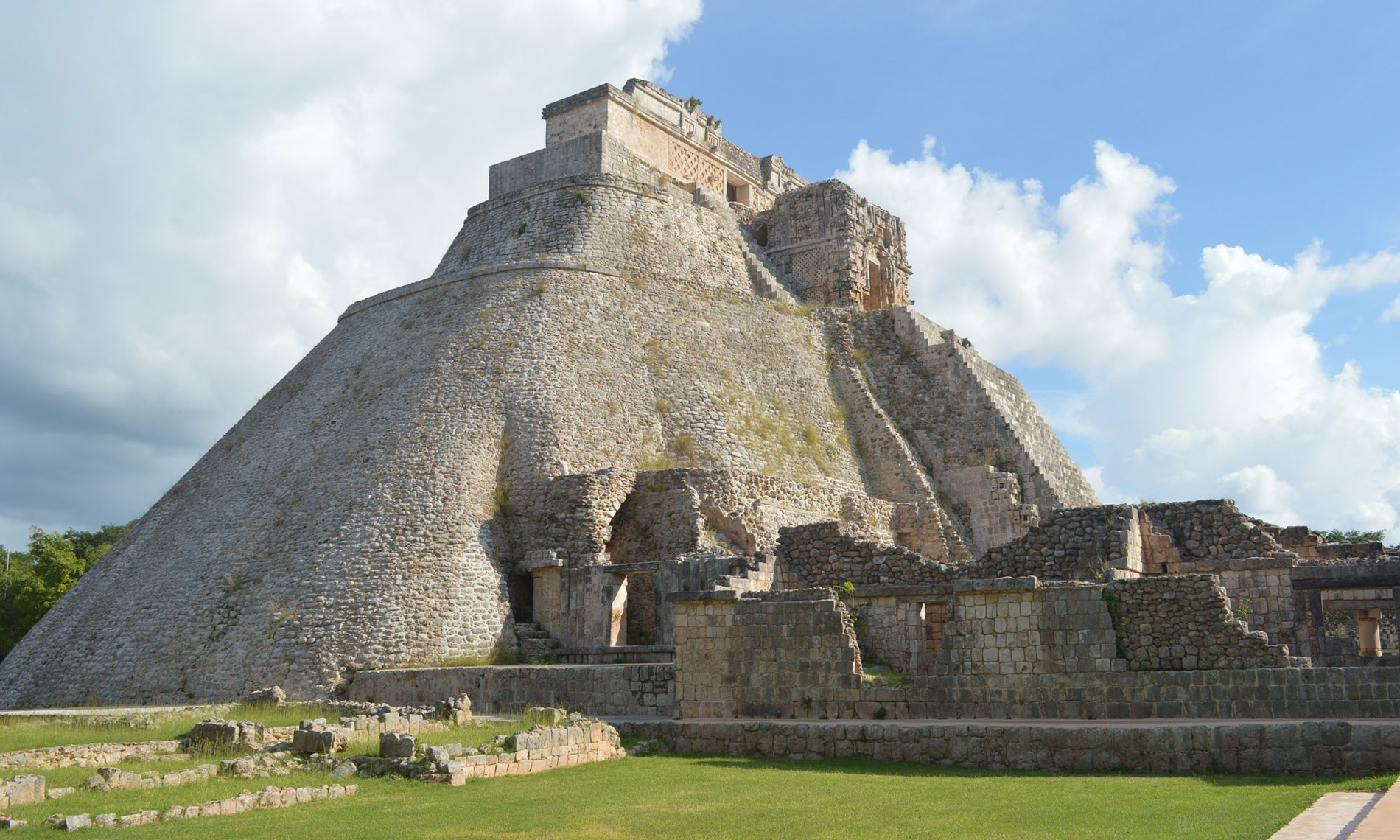 Why did you add these temples? One thing is clear: wearing a temple, the pyramid could never again host all-powerful visitors. It seems that the Mayans could no longer support their creators, whom they considered too authoritarian, too demanding and too intrusive. Now the gods stay at the bottom of the space. We do not know our happiness.

Still today, in Central Asia, “people think that King Solomon continues to fly on its miraculous flying machine over the vast areas of Asia. In the mountains, it is not uncommon to find ruins or stones bearing, as a remnant of his long prayers, the mark of his foot or his knees. These mountains are called thrones of Solomon. The great king went there by flying and reaching the heights, forgot the cares of government and refreshed his mind.” (source)Nicholas Roerich, Shambala, 1930

China is home to a large number of pyramids, some of which are larger than that of Cheops. Many of them remained truncated in their original version. 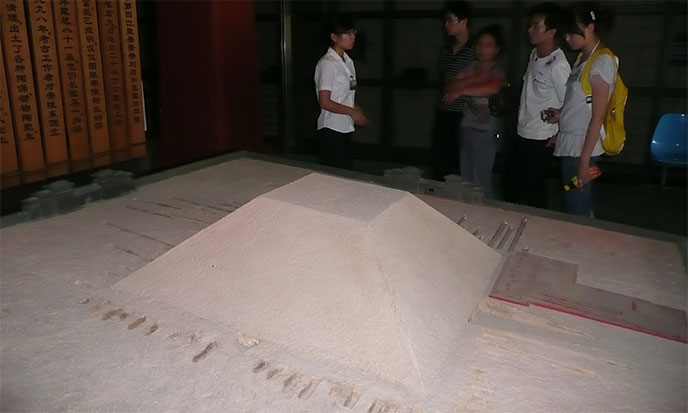 In Central China, the White Pyramid or Xian Pyramid is almost unknown even for Chinese people. The structure was said to measure 1,000 feet in height which made it the highest pyramid in the world (the Great Pyramid of Egypt is 450 feet in height). According to the monastic documents the pyramid was already extremely old when the records were made. In the valleys surrounding the Xian pyramid were dozens of other pyramids, some rising to an elevation almost as great. As the moldel showstop photo the pyramid is troncated, with a flat top, according to the legend of Solomon’s plane. Was it but a legend? What do you think? Read more.

Julie Ryder, eminent researcher from Montana, photographed what can be called a “truncated pyramid airstrip“. It is obvious that such flat surfaces, in height, could offer an interest for the engines of protohistory. I can not resist the pleasure of showing this picture. 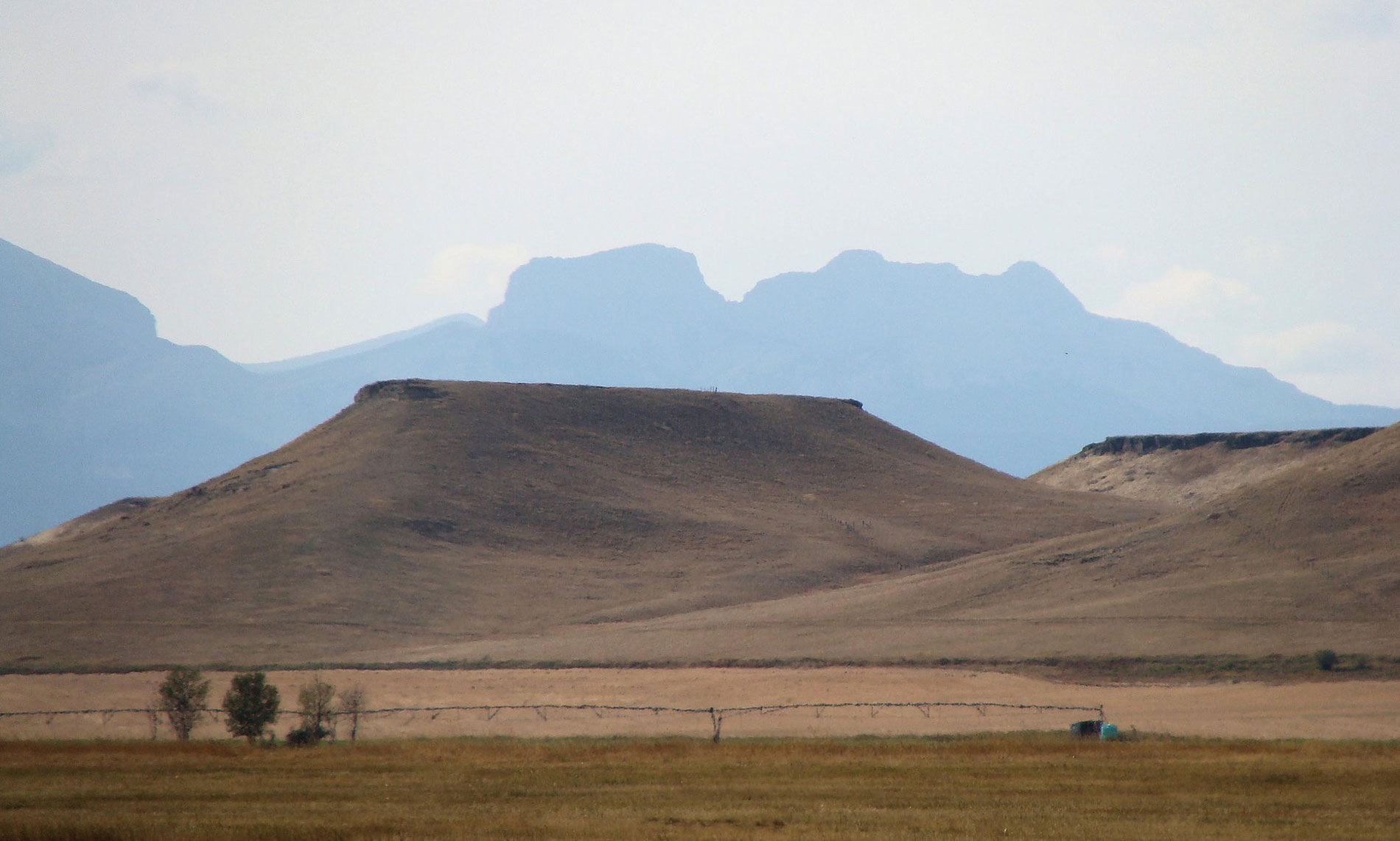 It is all the more interesting as Montana is a Mecca of megalithism, as Julie Ryder has amply demonstrated. This region of the world was assiduously frequented by the flying machines of the terraformers. What is surprising that there are several mesas? They had to have their ships land somewhere. 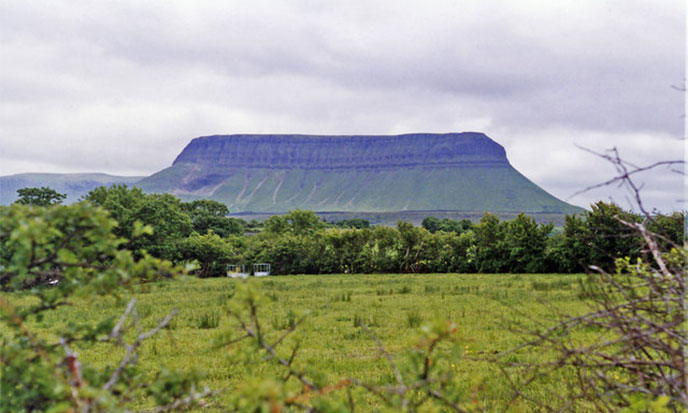 Throughout the world, many truncated mountains – as Mont-Dol, in Dol-de-Bretagne, or La Rocca di Cavour, Piemonte, Italy – fed this type of legends, where antique aircrafts take off for other worlds beyond the sky. It seems that this type of flat-top hills was the basis of ancient spaceports and airports. One can even wonder if all leveled peaks aren’t work of men, to land their planes.

In Ireland, Benbulben Table Mountainsee top photo is a typical mesa structure. This particular form of mountain with wide and flat top would be perfect for the takeoff of helicopter, rocket or UFO type gears. It is possible that these rock formations are only due to a geological caprice. Nature can take a lot, but there are limits! The former gods terraformed this planet, piercing mountains, drying swamps, digging lakes, opening isthmus, why would not they have been able to clear mountains?

In Iceland, Mount Kirkjufellbelow has the precise shape that the UFOs of the previous gods demanded. The Vimanas or the plane of King Solomon could very well land there and take off. 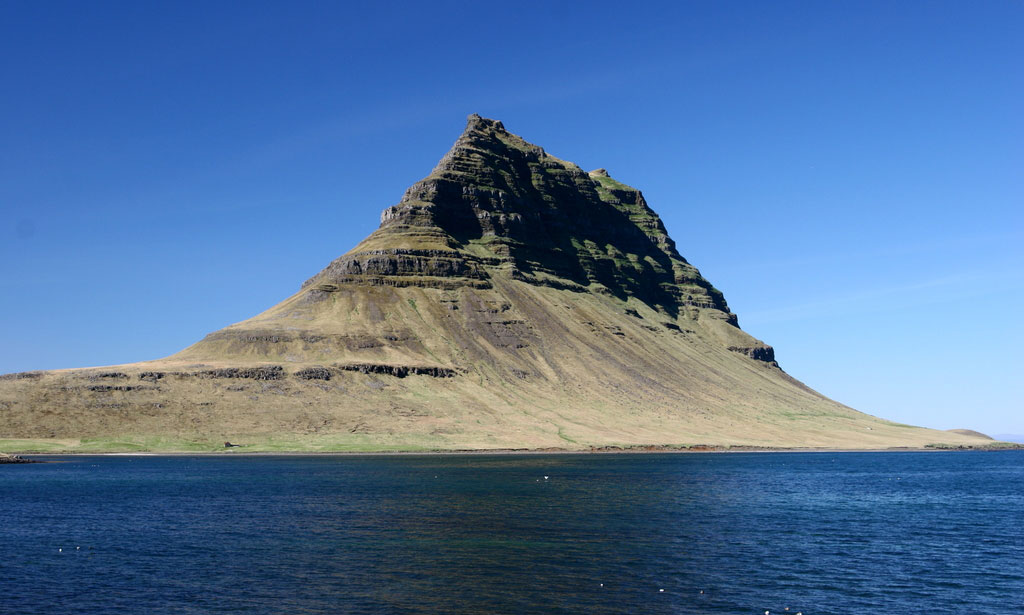 Let’s also mention this curious flat on the side of Mount Olympus in Greece, which affects quite the shape and dimensions of a runway. The latter, for once, is not attributed to Solomon. It bears the evocative name of Jupiter’s seat. Let us not forget that Olympus was reputed to be the residence of the ancient gods. Did they live there or did they go there to take a flying machine to Hyperborea, the true place of their stay? The summit of Olympus is not an enviable place to live in. On the other hand, the location of Olympus, in Greece, made it the ideal springboard for the stars, and I suspect that the former gods used it often.

It should be noted that the base of the Roman temple of Jupiter at Karnak, in present-day Lebanon, was an ancient landing runway. Built with megalithic oversized blocks, this indestructible platform  served as a base for the Baal Temple and later for a Roman temple. The basement is the only remains of the Anunnaki space facilities destroyed around 2300 BCE. (source)R. A. Boulay, The reptilian past of humanity 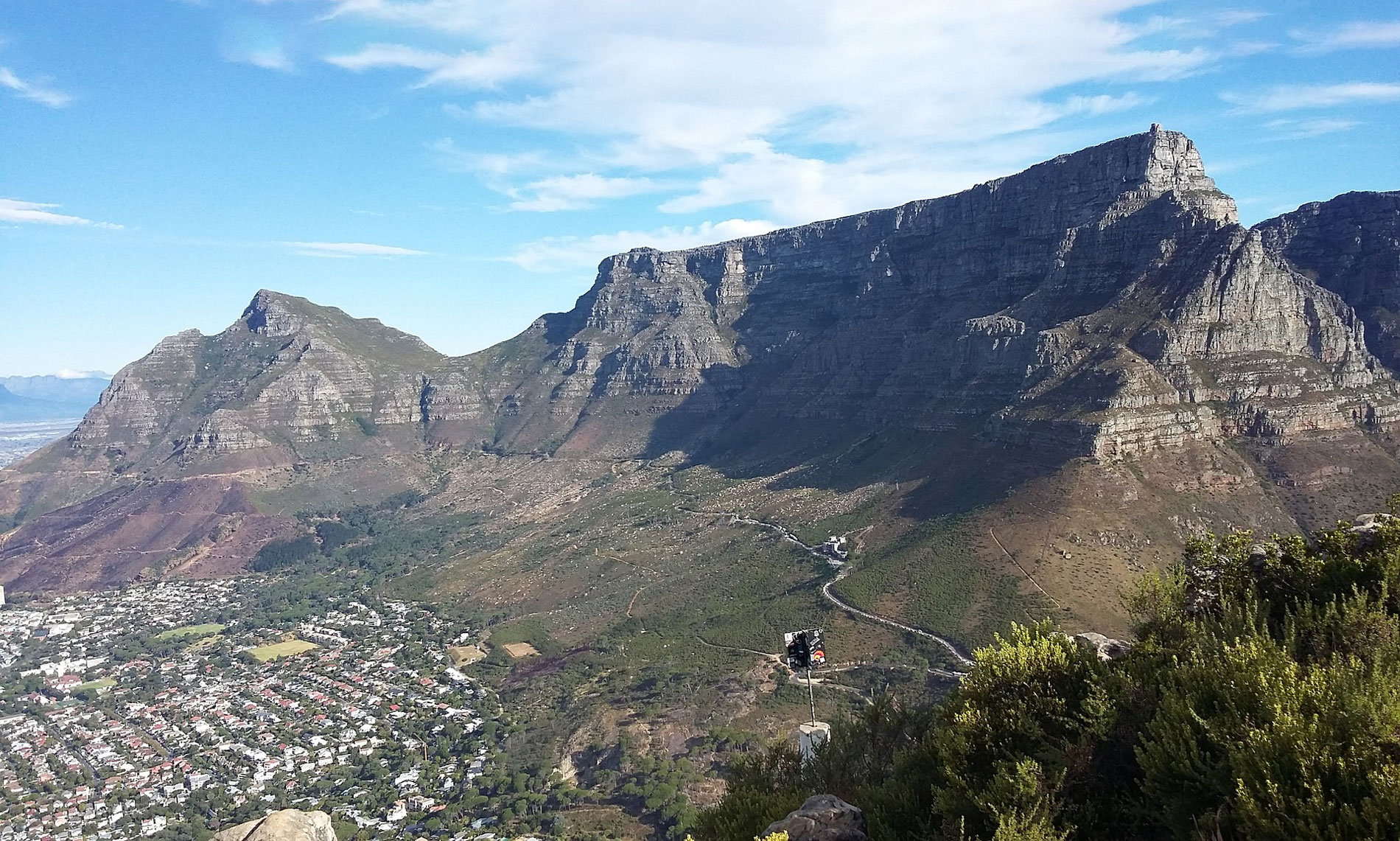 The Great Pyramid of Giza, called Cheops, has probably had this form before being topped with a pointed apex. A disturbing detail can help us determine the form of this first version. Indeed, if the vents of the king’s chamber lead to the open air, those of the queen’s chamber, located below, stop prior to the surface. We may conjecture that originally they emerged outside. What the use of interrupted ducts?

I said that the pseudo vents of the King’s Chamber once arrived in the open air. Not quite by now: the stone of the siding covered the two holes. This shows that the siding is not original and that its builder, Khufu, cared no more of these conduits whose usefulness escaped him. But the ducts of the Queen’s Chamber are deeper and do not lead anywhere. One can surmise that the point where they stop now was once the surface of the pyramid. 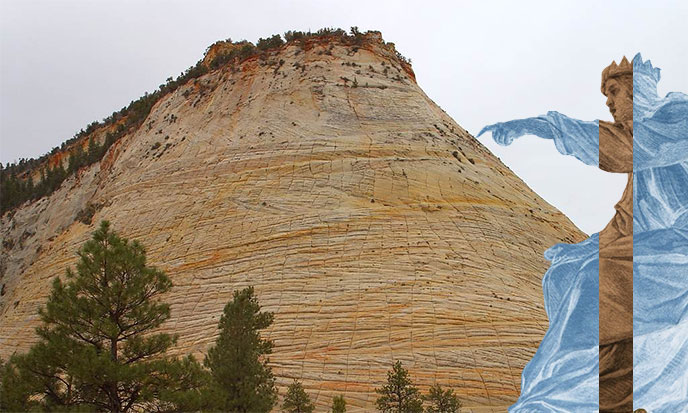 Buried under the current pyramid, there would therefore have been a first version significantly smaller and truncated. It had then a large flat top that could likewise serve as a runway … as a spaceport for instance …

Today November 19, 2018, I receive this e-mail from the friend Alain Aillet: “Hello Sorcerer, I just received, via a thread lambda news, an article that tilt. Arch Noah could have been found in Iran, on top of a mountain called “Alborz”, in the north of the country. Firstly, the name sounds familiar to me. A group of religious adventurers has got their hands on it. They found rocky formations resembling petrified beams to attest to the presence of something unusual. Good start, I thought, but still the old story. Now the following killed me. The exact location where this structure was observed is … Takht-e-Suleman! Yes, you read it, and I confirm the translation: Throne of Solomon!! The rest is for you to tell me.”

Dear Alain! Right away, I wrote back: “Now you kills me!” These beams are the obvious trace of the last flying machines that the humans made alone in wood, with wings in canvas, finally quite close to the Icarus delirium I have written an article on this, which you may have read: Secret history of the ancient aviation.The gods before had “modern” metal planes, but after their departure the little humans had to shrug off their claim and be content with improved kites.So was the airplane of Solomon, which may be the remains.Thank you anyway, I will look for sources for this info, which will complement admirably my article on the Thrones of Solomon, where I mention the Takht-e-Suleman of Iran (there are several in Arabic, and others to China, in fact all over the world) I love when the evidence comes to us without having to look for it. Be blessed, you revolutionary citizen!”

That’s it. I wanted to post immediately this jubilant synchronicity. Notice to all my dear readers: do like Alain, do not miss to send me a link if you fall like that on an info which comes to attest some of my theories smokers, but all true, the proof.