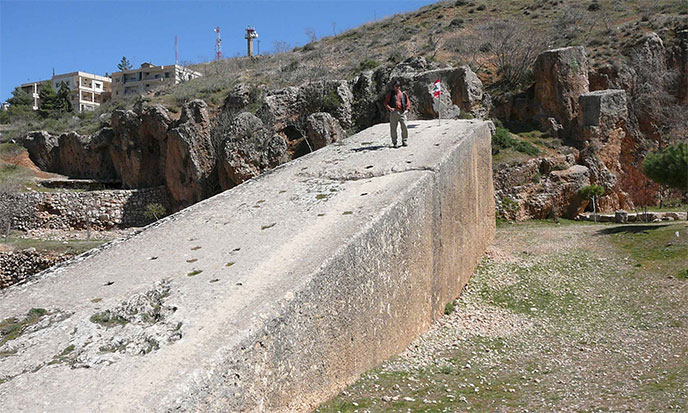 A third giant monolith was discovered early in 2015 at the archaeological site of Baalbek Heliopolis Lebanon.

There are already the world’s largest concentration of giant monoliths, and the father of carved monoliths, a block of 21.50 m long, 4 m wide and 4.20 m high. Known as Hajar al-Hibla or Stone of the Pregnant Woman –estimated weight 1,000 tons- which make the heaviest worked stone in the world.

By whom were these blocks cut?

On a foundation made up of these oversized blocks, the Romans built a temple Jupiter. We found this former temple of Baal was already a reuse of a place that was not a temple, but a technical spot as we shall see.

Despite the incredible feat of their size, their transport and assembly, origin and value of these blocks is unknown and little studied. We only know that the Phoenicians were worshiping Baal Haddad, the equivalent of Jupiter (Baalbek also means “the temple of Baal”). Although awarded to the Phoenicians, the impressive mound on which is built the Roman site remains an enigma due to the size of the stones and their perfect fit.

How old is this construction?

Most tell of stones weighing hundreds of tons. Three of them, the Trilithon even reach the dizzying weight of 800 tons !! Imagine blocks 19m long x 4m side (2 buses placed end to end) – recall that the obelisk of the Concorde, relative to Paris by Napoleon, although measuring 23m high, is much thinner and weighs ” that “230 tonnes.

The accumulation of stones to size if excessive is unique. A very serious reason must have forced the builders to use such heavy blocks. A vital reason.

Carbon dating 14 being ineffective carved stone (the size does not match any transformation fixing carbon atoms) and these blocks with no inscription, it is impossible to know at what time they were laid there.

One thing for sure, they were already present when the Romans began the construction of the temple, and certainly when the Phoenician celebrated their first god Baal. I imagine the first buildings are older than the 3rd millennium BCE.

The true origin of Baalbek

Based on my legendary and religious research, also based on my traditional education and my repeated visits to the Akashic records, and checking the data with the dazzling intuitions RA Boulay (source)R.A. Boulay, Le passé reptilien de l’humanité among other visionary authors, this is my understanding of the history of Baalbek.

The place was chosen and the city built in this blessed land that was not yet called Lebanon but Dilmun, as Boulay shows later in this article.

Formerly, in the land of Dilmun, the gods-from-the-stars had built a spaceport to serve their immense mother ship stationary orbiting over the North Pole, a mother ship that Sumerian called Nibiru, and the Celts Hyperborea.

In the land of Dilmun, between the Mediterranean coast and the huge cedar forest planted by Enki, was the spaceport of the astronaut gods.

Gilgamesh epics tells how Gilgamesh and friend Enkiddu went into Enki’s forest of cedars. When they reached there, Gilgamesh wins the abode of the gods in heaven. That was the mother ship of reptilian gods Anunna, having more than one name: Hyperborea because it is moored above the North Pole. Others call Nibiru or Hercolobus because it looks like a wandering planet. Other call Garden of Hesperides, Garden of Eden or Adam’s paradise because there reigns a mild climate throughout the year in a tropical bubble where fruit grow with unknown profusion.

The Epic of Adapa, in many ways, tells the same story and reinforces the leading position of Baalbek for the former gods.

Where is the land of Dilmun? Text is formal, yet no researcher are heeded. “In the Middle East, there is a land of cedars worthy of the name in ancient times it covered all of Lebanon as well that a part of Syria.

In fact, the Epic of Gilgamesh evokes as “the ten thousand miles long forest.” When his guardian Humbaba roared, “that shakes the earth of Saria and Lebanon.” Despite these specific references to Lebanon, scholars have ignored the fact – and still do.

In Baalbek, the gods had their angels – Giants to their service – built a huge platform that can still be seen today: the basement of a Roman temple dedicated to Jupiter / Zeus. 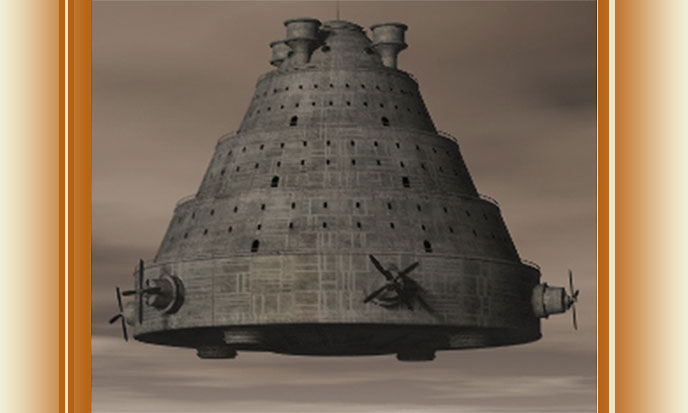 At all times humans have reused the old foundations on which to build their own temples. In Roman times, the memory of flying gods and their earthly base had faded from memory, the Romans do not ask: this solid esplanade has been confused with a sacred place.

This behavior towards our initiators is characteristic. As soon as we started to forget them, their actions and deeds were disembodied. Our naivety has made them gods, their spaceports have become sacred plazas, and we take the plans of their polymetallic engine for the symbol of the yin-yang.

The symbolism consumes the disappearance of knowledge. Just as the various automatic machines and gadgets insidiously rob us our secret powers.