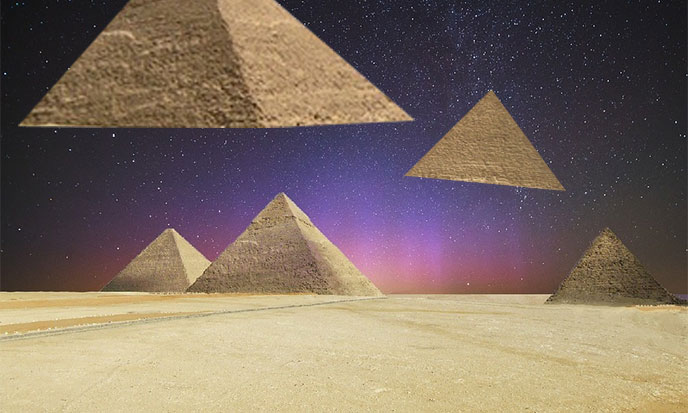 For what reason is the Serpent People in five countries and four continents: ancient Egypt, pre-Celtic Ireland, Mesopotamia,  India and Mesoamerica? Is it a metaphor to describe astronauts gods? Or just an evidence of ancient times : those people used flying devices just as we do today.

The theme of the feathered serpent -or flying snake- is universal. In various forms, it describes the former gods in many places of the world. In Monsoon Asia, this curious myth seems to have a natural origin: there is actually an air reptile, the Chrysolopea, a flying snake appearing in the monsoon forests from Thailand to Indonesia, through Brunei, the Andaman Islands, Malaysia, Philippines, Vietnam, Cambodia, Laos and Sri Lanka.

This fascinating creature must have struck many imaginations! Is this the source of the nickname “flying snakes”? All conjectures are permitted … even if there is not a chance. Try, don’t take it for granted, doubt everything, firstly what I say.

The fact is that ancient iconography attests to a number of flying machines: the vimanas and pushpakas in ancient India, the aircraft of Solomon, the numerous descriptions and depictions of planes in jewelry, the legends of flying carpets and antique saucers, etc.

In the Bible, we find other evidence of flying machines, like giant wheels or other celestial chariots. Thus, in the book of Enoch, who was unjustly removed from the Bible as the Torah, the prophet Enoch demonstrates the existence of flying chariots in which God takes him to visit other worlds far into the sky.

The prophet Ezekiel in turn saw a large celestial wheel, resembling a space station or a mother ship, with smaller wheels, perhaps flying saucers hovering above him in the air.

But the most striking ones are the kinds of UFOs whose interior is shaped like a snake, or rather an Ouroboros, this primordial snake biting its tail. In these old-style UFOs, a god sat and operated buttons and levers. He is found in China, in Vedic India, in predynastic Egypt and in Ancient America. In Mesoamerica the flying snake is a representation of god Quetzalcoatl, According to legend, this god came from East on a rowing boat and returned to East on a raft of snakes.

Note that Quetzalcoatl, Prince of the Snake People, brought craft, science, agriculture and abundance to the local populations. In Egypt, the god who is represented by the same flying snake is also a benevolent God, bringing abundance.

The Egyptian god of the Nile is Hapy, or Hapi, whose annual floods fill the granaries. Hapi is a strange god, a hermaphrodite and nurturing god.

His breasts make him look like Isis of Anatolia whom I talk about here. Could it be that the terraformer gods, as Hapi, had both genders? I prefer another hypothesis: the first gods were goddesses. Males came long after females.

That would give an interesting perspective to the myth of the creation of Eve and Pandora, which indeed show that woman was created after man.

It is true that the Bible tells us otherwise. What could be a lie turned like a ceasefire against females by the patriarchs who were jealous of females magical powers, since females were much older than males newcomers.

This thesis of Lilith Serpent Woman is reinforced by the primitive matriarchy, the worldwide worship of the Great Goddess and the Amazon warriors.