Since Atlanteans and Hyperboreans gods looked the same, ie very civilized, highly educated and very powerful beings, using wonderful devices, living in palaces fitted with indescribable luxury, there is a good chance that they both belonged to the same gang: the astronauts gods.

If Atlantis is an island in fact, the case of Hyperborea is a little different. Instructed by the terrible crash of Atlantis, the almighty gods decided differently. Hyperborea is not an island, but a skyland.

Note that Atlantis and Hyperborea did not appear at the same time. When Atlantis disappeared some 12,000 years ago, no mention of Hyperborea yet. The name appeared in the legendary texts between 4000 and 2000 BCE. Hyperborea is indeed the successor of Atlantis, the new mother ship of the gods cosmonauts in geostationary orbit above the North Pole.

This is the exact meaning of the word HyperBoreal : above the North Pole. The breathtaking presence of this new moon, with apparent diameter greater than the former moon, does not go unnoticed.

But humans of that time were largely ignorant of astronomy, for the gods had not educated them yet. So they graciously accepted this change in the sky, that would quickly lead to a change on earth even more important. In China however, an emperor noticed the changing skies and stars positions. His name was Yao.

The form and appearance of the artificial planet Hyperborea is found in the Celtic cross, and also in the compass of marine, a compass under glass globe that accurately reproduces the divine characteristics of this ark space. The illustration above is eloquent, and there is also the form of Atlantis, provided that the box of wood is replaced by the waters of the Atlantic Ocean.

This particular form is the basis of all the symbols in the shape of a cross, the four branches of which are equal. Another confounding example is the cross Pattee of the Templars, which is found on the white coat of the Knight, and then, more than a century after the dissolution of the order of the Temple, on the sails of the three caravels of Christopher Columbus, and then, a bunch of centuries later, on the kaki uniform of our enemies the German.

The four branches of the cross represent the four rivers of Paradise, which are actually four canals on the artificial island Atlantis. On the cross, these four channels have been disproportionately magnified by the ignorance of the copyists and the effects of fashion, but we must see, not a symbol, but indeed the idealized representation of Paradise, an artificial paradise that turned our heads and a memory that is in each of our cells.

Unlike Atlantis, whose too ancient disappearance has deleted detailed descriptions, Hyperborea is attested in many legends – as this is how historians have called the most ancient chronicles: legends. For them, it seems that before 4000 BP, all our ancestors had reported was bullshit. Then suddenly, after that date, they stopped saying nonsense to start telling the truth. A strange way of considering the past.

As a mythologist, I do not have that prevention. I welcome with the same rigor the most ancient texts and the most modern. I have no deadline, no dominant thought, no taboo. I do not believe that man is superior to the worm, but it turns out I’m not a worm. A caterpillar neither …

In 330 BC, Pytheas, explorer and navigator from Greek colony of Phocea, wrote in his diary: “When sleep is killing me at times, I see my ship on the waves of the vast ocean and I think that I’m in the land where the sun never sets.

Yes, I dreamed the endless day in a golden light. I am so eager to turn the prow of my ship toward the north! At the top of the island of Britain, to the north, the days last more than twenty hours in the summertime.

I want to see the sun that never sets and the bed of Ursa Major. I pray Artemis to inspire me and intercede with her brilliant brother, Apollo, for he allows me to contemplate him in all his glory at the top of the world, where he is the winner of the night, where his chariot is drawn by white horses throughout a wonderful and triumphant day.

I want to see a long road to this northern country that will lead me to the endless day, to amber, to tin and perhaps to death. But death will be sweet if I finally know the truth of the cosmos and its beauty worthy of the gods. Yes, this summer I will be at the source of Boreal wind, and see the victory of the sun if Artemis gives me this honor which I look forward. ” (source)Logbook of Pytheas the Greek, after Ferdinand Lallemand (1955)

Hyperborea was a floating island in the North Pole sky. A suspended continent with thousands of people in several cities among forests, orchards, fields, mountains and rivers.

The gods of Hyperborea needed workers. To cultivate the land, to work in the mines, to build new towns, to drain swamps, to dig canals and tunnels, they do need people for all the tremendous work of terraforming this wild planet.

God needs men, they say. Those gods, who are the only ones we have known, really need men … and women.

On Hyperborea, they grab the creme de la creme, the finest craftsmen and artists, the most astute accounting and skillful builders, the best growers and breeders, and above all, the prettiest girls. The Bible tells how the gods doted beautiful human females. As I said, humans have tolerated these abuse. Initially, I mean. For most of them, being elected to join the paradise seemed the ultimate reward. Of course, the Gods have worked hard to disguise the sleazy exploitation. Whores were proud. Slaves were grateful. They were all so happy to go to heaven that they went singing hymns to the glory of their tyrants.

This view has profoundly marked the collective unconscious. We find the visible trace, though distorted, in all religions of the world. Garden of Earthly Delights of the oldest Mazdeist religion, this Hyperborea. Nibiru, the wandering planet of Babylonian religion, is Hyperborea. The Tlalocan, paradise of the Aztec god Tlaloc or Maya god Tchac, located atop the highest mountain in the Andes, is Hyperborea. Olympus, the paradise of Zeus and divine pals, is Hyperborea too. The garden of the Hesperides, a mythical island paradise inhabited divine beauties, is Atlantis or Hyperborea.

The Christian paradise, close to God, saints and angels in heaven their world where everything is perfect, is Hyperborea. The paradise of Allah, with its thousand virgins which are recognized the Avalon beauties, is Atlantis, Hyperborea or Punt. Such unanimity is surprising anyone – if not historian.

Hyperborea is the land of demigods Tuatha Dé Danann, who is said they were Elves. In Celtic mythology of Ireland, “the Tuatha Dé Danann (the people of the goddess Dana) are gods who came from the four northern islands, Falias, Gorias, Findias and Murias, from which they bring five talismans, the javelin of Lugh, the sword of Nuada, the cauldron and club of Dagda and the Stone of Fal.” (Source)Wikipedia

Recent maps, such as the following, show a circular island, just on the north pole, divided into four quarters. From my point of view, it cannot be anything but an artificial island. It can not stand on the ice, like Atlantis floated in the ocean, it can not float on the glacial Arctic Ocean, ever frozen. 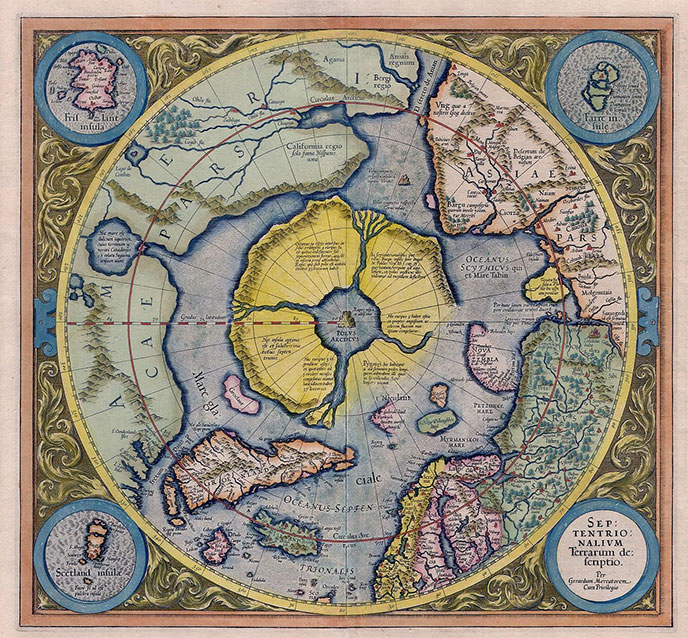 Besides, if the legends speak of islands, they mention islands in the sky.

For me, these are the four islands of Hyperborea – four quarters, each housing a college of activity: teachers and priests quarter, nobles and warriors quarter, merchants and financial quarter, artisans and workers quarter. So the company of the gods lived in perfect harmony. This functional quadripartition was imposed by Rama throughout his empire, which explains the survival of the four casts in India, although the current system is only a sad perversion of the original plan.

In France, due to the Celts according to Jean-Claude Flornoy, the four-quarters system was abandoned for three quarters or colleges: the druids, the warriors and the rest. During French revolution it became: the clergy, the nobility and the third state.

Sometimes the Tuatha came from Hyperborea, which seem to be a real country, sometimes they came from the Sidhe where they return when the Celts invaded Ireland.

The Sidhe is not a real place on this earth. Legends speak clearly of another world. This other world is artificial planet in the Arctic sky. It is undoubtedly Nibiru, it is Hyperborea.