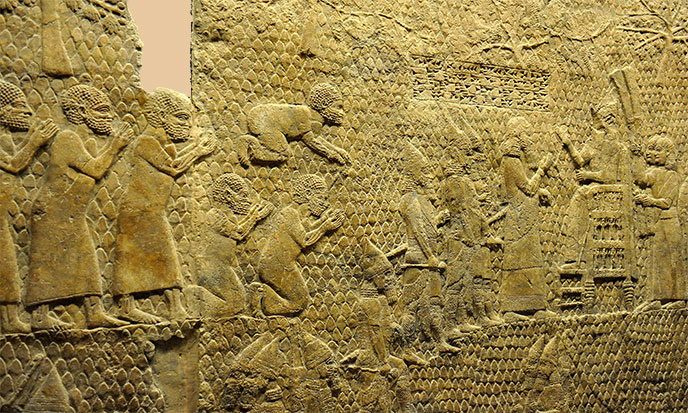 “The Siege of Lachish, which takes place in -701, opposed the Assyrian army under King Sennacherib vs the kingdom of Judah. ​​The victory was Assyrian and the inhabitants of Lachish massacred or deported.
This victory was carved in low relief that adorned the walls of the palace of Sennacherib in Nineveh. These reliefs are now on display at the British Museum in London.”  (source) More importantly, these reliefs bring us evidence galore.

The kingdom of Judah, then vassal of the Assyrian empire, refused to pay taxes and manifested the desire for independence. The reaction of Assyria was immediate: Sennacherib’s army surrounded the Judean city of Lachish.

This battle is exciting in more ways than one. First, it depicts the Assyrian king Sennacherib, an encyclopedic. He appears here in warlord, although he was probably the most educated king of the time. He did collect thousands of ancient inscriptions, so as to constitute a bank of the knowledge and the past of the world, an encyclopedia of the age when gods walked among men.

“When they reached the city, the attackers proposed surrender of its inhabitants with alleged leniency. The Judeans refused, the Assyrian army began encircling the city. But the Assyrians were more likely to assail cities than to wait for months down the walls. The archers, protected by large size shields, advanced towards the walls, and aimed defenders on their walls. This allowed the siege engines to come forward.

According to the reliefs, they were made of one or two rams topped by a wooden tower manned by archers, all on four wheels advancing on an assault ramp (discovered in 1970 by David Ussishkin ) made of earth and covered with stone slabs. The craft was protected from flaming arrows by moistened skins of beasts. At the same time another assault was given by infantry equipped with ladders, supported by other archers and slingers.” (source)

Now have a close look to this relief. Warriors of very different sizes are on display. At least three formats, so to speak. Smaller formats could well be children. They are dressed and armed like warriors, which excludes nothing, because children have always fought wars over the ancient times – and modern, for the barbarians. The children always fight on foot, on the front line. Cannon fodder, their vocation is to protect the experienced soldiers walking behind. Hence the name of infantry, children’s army.

Except for the infantry, the relief shows medium-sized and double-sized adults. One can invoke the rules of the modern perspective, which represent smaller more distant characters, but those rules were not in use at that distant time. The experts’ explanation is that powerful people are major sized, while their servants are smaller. The size of the figures indicate their importance, their social status. It is farfetched, presumably to make them grow faster. I think it is appropriate to take these images for what they are: realistic representations of what really happened. This is indeed the giants walking among men.

The middle sized are Assyrian warriors recognizable by their warhead helmet, holding two giants by the ankles. The giants seem to fly, or rather to take flight. They are prevented by the solid handles that seized their ankles. How do they fly? They outstretched arms, but do not have wings, nor any apparatus so. Do they master gravity? In any case, their existence is attested by Zoroastrianism, very ancient religion of the god Ahura Mazda, we should write Ahu Ram Ase Da, an Aesir god who bore the title of Ram, the Aries of Hyperborea, heading an army of flying giants.

Some mainline reserchers sought another interpretation to this curious scene. Here it is: the Assyrian soldiers are actually tearing the skin of two Hebrew captives. Incredulous amazement. One really needs much imagination to see that. Along with little observation!!

It is true that the flying giants are naked, but obviously not skinned. Otherwise, the soldiers would tear their skin, instead of shaking their ankles. 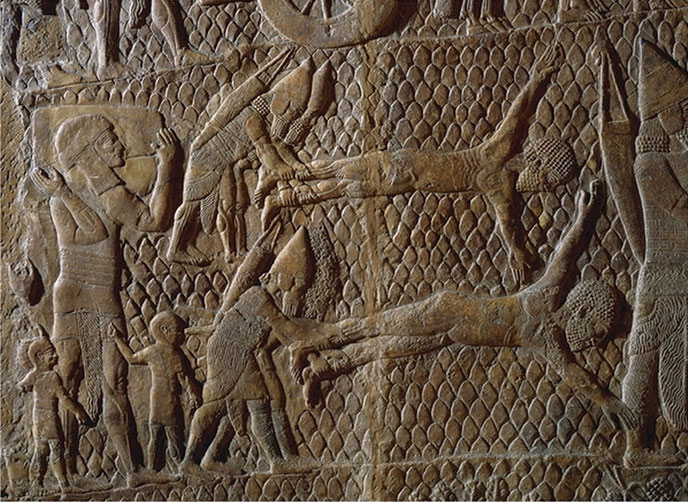 Flying giants are not the only giants on this relief. We also note a standing giant, surrounded by infantry. This giant does not fly, he carries a large stone block. It must be one of these stones with which the Assyrians paved the access road for their rams.

I also see evidence that the former giants were used as porters on many occasions, especially for the huge stones in cyclopean walls or pyramids. The tradition says that the giants have brought them, and this relief gives us visual confirmation. So the construction of the Egyptian pyramids or Cuzco walls find an explanation of common sense.

About ram that seems common use among the Assyrians, I find a striking confirmation of a vision I’d had on the Trojans. Homer was a bard, a kind of comic trooper who was doing stand-up in pubs. Entertainer of the common people, Homer was inspired to write his Odyssey and Iliad, by a sacred history. That of the god Ram, how he conquered the Mediterranean countries, the East and throughout Asia.

Homer distorted the whole story, mocked the god Mars, ridiculed the thousands of deaths, with a total lack of respect and delicacy. Derisively, he invented the farce of a large wooden horse in which Greek soldiers hid themselves, and these stupid Trojans have unwisely entered into their walled city.

I never believed in this farce, and I was right. Do not look for giant horse. A ram entered the city. It is actually a huge beam that Ram troops launched the city gates or walls to smash them. This arm belonging to Ram, was naturally decorated with a ram’s head. Hence the name.

Ram, horse, Homer had fun, but the original version was not suitable to laugh, hence the wrath of the great Heraclitus, who claimed the whip to Homer.

Thanks to these rams mounted on mobile towers and driven on paved roads built for the occasion, and also thanks to their flying giants, Assyrians entered the city. They massacred men, deported the women and children.

Seven centuries ago, pharaoh Tuthmosis had taken the fortress of Masada, but he had kept massacring men. The Egyptians deported all the Hebrew people, enslaved abroad until Moses break their chains.