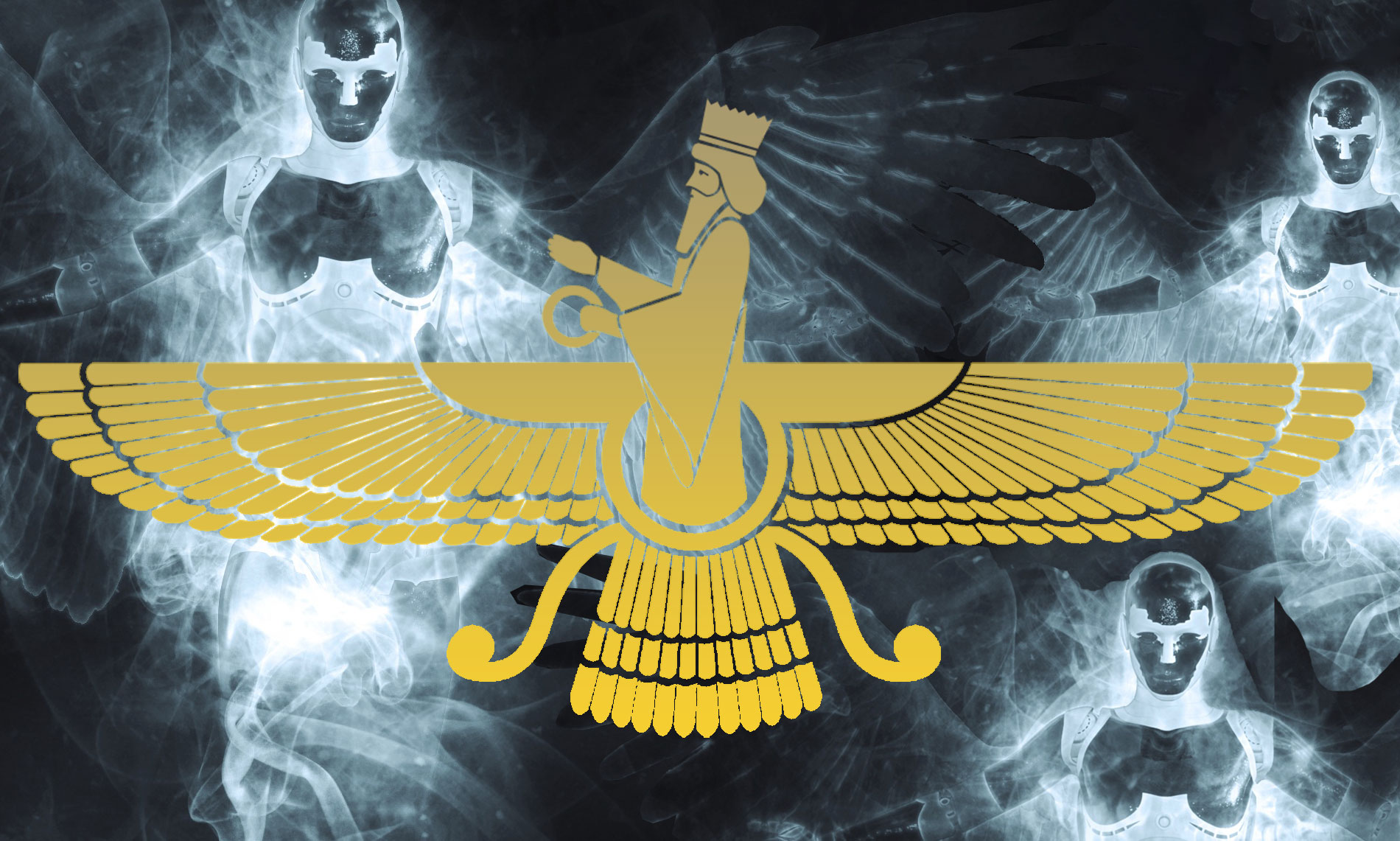 The ancient religion of Ahura Mazda is one of the oldest known. Its roots lie in a wonderful world populated by giant astronauts and sublight speed spacecraft.

Mazdeism is the ancient religion of Persia, now Iran. It’s named from its chief god, Ahura Mazda. Its origin goes back to the Indo-European tribes of the 2nd millenium BCE. Its official origins goes back to Indo-European tribes of the 2nd millennium BCE, but I have every reason to believe much older, judging by the eloquent legend of Yima, during the ice age.

This very ancient god has a name that can cut out everything else: Ahura Mazda, by virtue of the language of the birds, can be read as: Ahu Ram Ase Da. Ahu for Yahu or Anu, the first of terraforming gods, male of Ana the great goddess Anne of Britons. Ram for Rama, the healer druid, the peacemaker, the emperor of the world, the founder of Lamaism, the initiator of the human race. Ase, like the Nordic gods, to indicate the hyperborean origin of this very first god. And Da, as yes in Russian, as Dieu,God in French who comes from the Greek theos, translated both by Dieu and Zeus.

Ahu Ram Ase Da came down from the sky accompanied by his flying giants, say the ancient legends of Persia. One only asks to believe it, so much the ancient presence of the giants is universal. Every first religion, every mythology of the world is full of legends about these great beings, their prowess and their achievements. In the language of birds, Mazdeism can be read: mass deism. How could the ancient masses not have believed in God when the gods crowded among men? 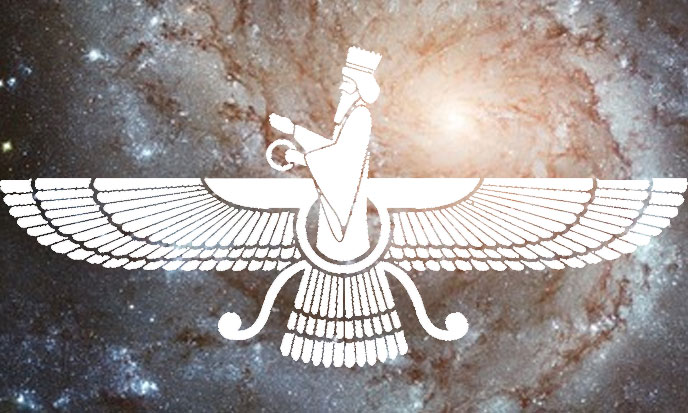 Zoroastrianism, named after Zoroaster / Zarathustra, is a reform of Mazdeism. Zarathustra, who Nietzsche made famous, imposed on the old traditional polytheistic religion the monotheistic grid that eventually prevailed everywhere in our latitudes. Under the monotheistic form, this very ancient religion still exists.

The sacred book of Zoroastrianism is the Zend Avesta or Avesta. “In Iran, it is in the region of Yazd which can most easily meet Zoroastrians, Guebres, as they are called in the country. They are not very many – 30,000 or 50,000 maybe – and they live either in Yazd or in Kirman, or even in hamlets nestled in the mountains that served as their refuge. They are far from the prosperity of their fellow of India who are called Parsis – Persians – because they are descended from men who, at the time of the Arab invasions, have fled their country to better keep their faith.

In Bombay, their main center in the Indian subcontinent, they are now a hundred thousand maybe. They got on all right, especially under British rule, building real industrial and financial empires. Already at the time of the Mughals, they strongly impressed the most glorious prince of the dynasty, Akbar, who was born in 1542 and died in 1605. They live in the elegant district of Malabar Hill: there, in a park, the towers are erected open atop where they deposit their dead. We call them the ” Towers of Silence”.

Shall we see the Parsis’ prosperity as a late rematch of their exile? Probably, but this revenge could be fatal to them. Indeed, wealth tends to distract them from their beliefs and traditions and is little incentive to grow and multiply. Some observers claim that their number is constantly decreasing.” (source)

On this  Mazdean high relief from the ancient city of Persepolis, we see men climbing stairs with food. Men, you say? Giants rather. Look at the size of the deer: these fellows measured more than five meters. An astronaut is wearing an adult deer. Size comparison is eloquent enough. Browsing the ancient times at random, giants continue to emerge, quiet at home as the Lords of the Land.

Those huge menlike people, where did they come from with their full transparent visor helmet? Looking like astronauts helmets … They also carry a boat too small for them. A boat made for men of our size. We can therefore describe this mural as follows: giant astronauts bring away various livestock and products of human activity. Where? In their spaceship?

Then did they come to us for food and fuel? Or did they outweigh biological specimens for study or cloning? Once it is accepted to open wide eyes to the real history of our species, the colors of the past are pimped. We find this story hardly hidden beneath the liar official history. True history followed us, repeated through myths and folk tales, sung by many poets, supported by the movie and comics, but still vilified by elites.

Mount Nemrud Dagh, Turkey, is decorated with the remains of giant statues erected there more than two thousand years ago by the first Antiochus of Commagene. Monoliths measured 8-9 m, and represented two lions, two eagles, and the former gods, including Ahura Mazda, which evokes Zeus with his helmet. On the mountaintop you can see the remains of seated statues. They were beheaded and mutilated, their very damaged heads remaining on the site. This scene has touched me deep inside.

For me, these statues commemorate a major event. This is how I see things. Once upon a time, on this very mountain, the former gods laid their flying machines. A long time ago, the giants came down from heaven to bring us writing, science, civilization. Their leader was Ahura Mazda, heavenly light. Mazdaism is the celebration of these divine initiators. And in this right place, they did land.

Yes, right here at Persepolis. This wonder of the pre-ancient world remained for a long time in the hands of ignorant barbarians. What is left of it now that the barbarians are far away? The barbarians pass, misfortune lasts. They left, many archaeological riches left with them …

Mount Nemrud Dag was what is known as a Solomon’s throne, a platform for takeoff and landing of flying machines. Like Mount Thabor … There is also the great Baalbek spaceport, there is still the false tower of Babel, which was also the space platform of the giants. But this is another story.

For the most magical following, click on the first link that catches your eye and follow the White Rabbit in Wonderland.