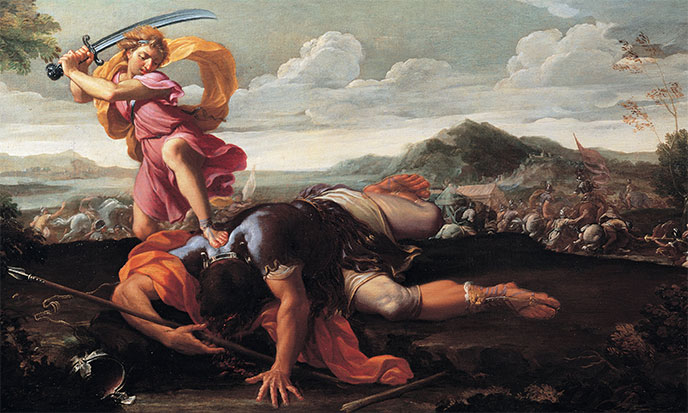 When Moses the Egyptian received from the mouth of Yahweh of Atlantis the name of the promised land for his people, he jumped in terror. “What? Palestine! It is the land of giants!”

Yahweh does not chicken out for so little. “Yes, he said, but their reign is coming to an end. Exterminate them all, I know you can cope with it, my dear Moses. Remember you got the Ark.”

Moses sighed, but who can disobey a flying giant that can reduce you in powder at the slightest frown? Praise Yahweh, Moses died before reaching the Promised Land. Died or maybe went back to his country Egypt. Anyway Moses wasn’t with the Jews when they reached Palestine.

So his nephew David had to deal with the giant Goliath – apparently Goliath was the last of Palestine giants. David beat him with a sling. And a pebble. It was no sweat, because Goliath was not in his prime.

Goliath was the latest son of the latest generation of giants, a species in decline, weak beings, unsuited to the new conditions on the planet. According to the Bible, Goliath measured 2.80 meters. It is far from 53 meters high Cyclops! Despite his size, he had nothing of his ancestors warlords. Evidence, David easily won.

As Polyphemus the Cyclops from the adventures of Odysseus, they represent the very last witnesses of a huge and powerful past. But those days were long gone … If science is still coaxing, many authors have admitted as evidence the presence of ancient giants. Before the destruction of Atlantis, according to Cayce, the human size varied greatly. For in those days, “there were giants on the earth, men of at least three or four meters, and well proportioned.”(source)Edgar Cayce, Earth Changes Update, by Hugh Lynn Cayce Where were they?

“It was Israel that caused the famous giants, those in the beginning, tall and well versed in the art of war.It’s not them that God has chosen, nor has he shown them the path of science, and they died because they lacked discernment they died because of their thoughtlessness.”

The Book of Baruch from which these words come is o ne of the banned books of the Bible, as the Book of Enoch. It tells the Nefilim episode, monstrous children of angels and women.

To tell the truth, several humanities have succeeded on this planet. Before disappearing, each one has evolved into a gigantic size. Yet, over the successive eras, the Giants were smaller and smaller. You can have a fair idea of their size by referring to the giant statues of Bamiyan, Afghanistan. Destroyed today by the religious intolerance of Talibans, or rather by their ignorance, because these statues were not Buddhists at first. They represent the races that have populated the Earth.

In a text written before their destruction, Robert Charroux evokes these three colossal statues, carved into the rock: “There is little time, the monoliths were still five in number. The largest statue was measuring 53 meters high7 meters higher than the Statue of Liberty in New York, the second one 35 meters, the third one 10 meters, the others being smaller, the smallest one being about the size of a man. According to the tradition, they are the “imperishable witnesses” of the secret doctrine left by the former Giants.

The monks covered them with plaster to turn them into Buddhas, but it is easy to discern the trickery.  “It is true that the “makeup” of the Great Sphinx was more successful. Of course, official archaeologists do not agree despite a disturbing fact: “These pseudo-Buddhas have no face: no more forehead, no more nose, no more eyes, no more lips. From forehead to chin the faces were reduced to a vertical plane. This seems a deliberate mutilation…”

Charroux adds a little further: “According to a tradition, these statues are the only reminders of the early races.” Unfortunately he does not specify his sources. However, we can legitimately infer that the first race, that of Uranians and Cyclops, was up to 53 meters high. The second race, those of the Titans, was 35 meters high. The third, giants, measured 10 meters. The other stared down at the following humanities, smaller and smaller…
… until the last race, the smaller statue to our current size.

When gravity has increased, dinosaurs disappeared. And Giants also at the same time. At least, most of them …