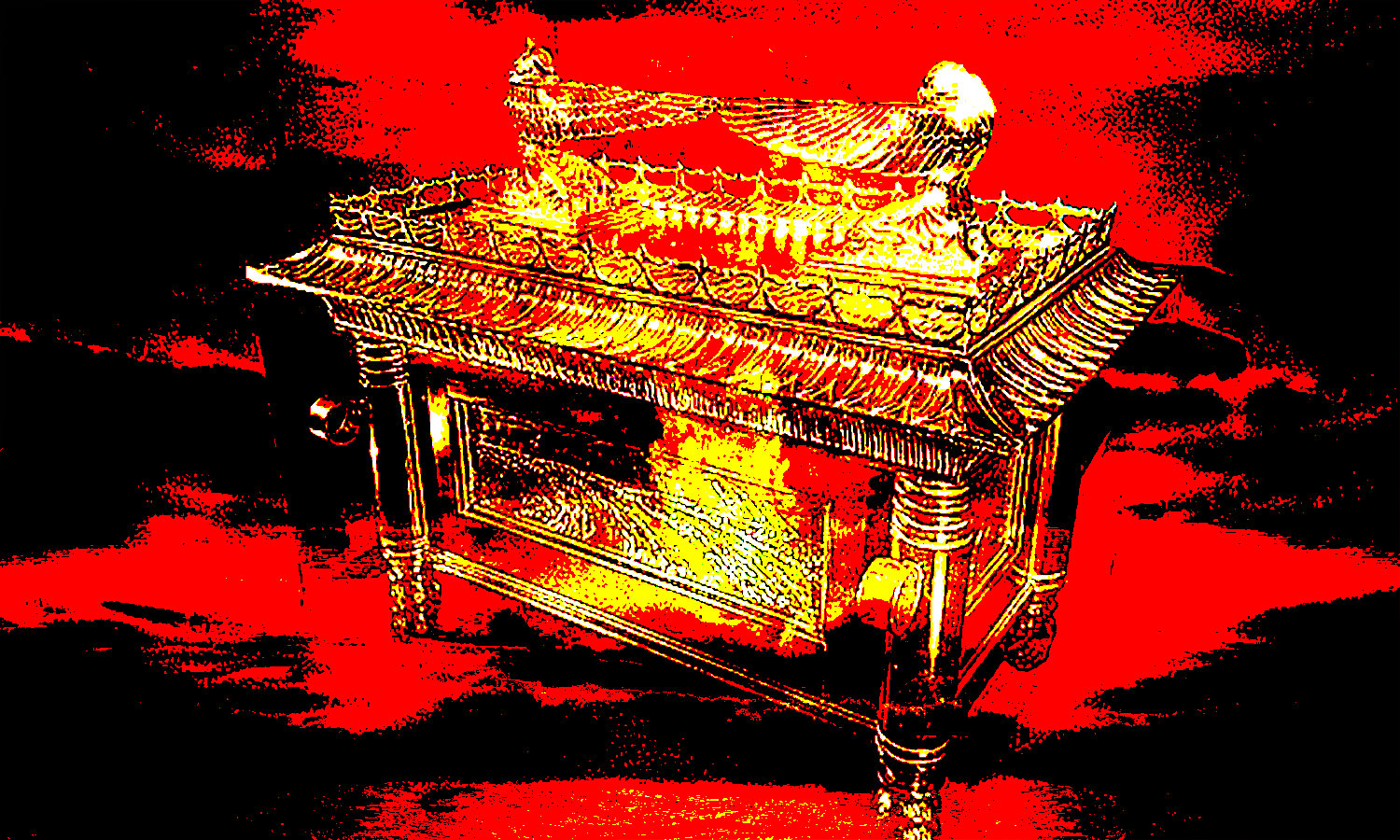 Powerful was the Ark. Dangerous, deadly it has been so many times. Dangerous to handle, transport or approach within a kilometre! On the instructions of Yahweh, Moses forms a body of priests, the tribe of Levi, to handle it with all the necessary precautions. Only these Levites, specially trained and protected initiates, could approach the Ark without risking death. And again!

We saw what the ark of the covenant was for, and how Moses took it from Egypt, and not received on the summit of Mount Sinai as the Bible says. It was because he stole the Ark of the Covenant from Egypt that his brother the reigning pharaoh, Touthmosis II, launched his army in pursuit of him. The rest is in the Bible. Moses climbed up to Sinai where Yahveh gave him the tables, fuel cells that allowed the Ark to function. These combustible tables have been called the Tables of the Law, where the hand of Yahweh-God has engraved the ten commandments. And then he gave Moses all the necessary instructions — those of an atomist engineer. These issues were dealt with in two articles, The Ark of the Covenant and Moses and the Ark. I strongly recommend reading it before this article.

Whenever the Levites approached the Ark, they had to wear protective suits. “The guidelines for making these garments are very detailed and specific, allowing no margin of error. We understand that their protective nature was woven into the fabric.” (source)R.A. Boulay, Le passé reptilien de l’humanité, p.188

I have already shown that the generalissimo Yahveh possessed the atomic weapon he used to destroy Sodom and Gomorrah. Atomic scientists gathered in Gabon have discovered several nuclear reactors that have operated for millennia, at a time so long ago that no prehistorian will be able to recognize a human presence. But we don’t know anything about the atomic engineers who ran those reactors. Who’s to say they’re humans?

We also saw what terrible arsenal possessed the former gods. Missiles, inertia bombs, stasis generators, radiation launchers, nuclear charges, destructive lasers, and many other weapons that we do not know the secret of.

Humanity’s past is not populated only by savages dressed in animal skins or citizens in long robes. It is full of weapons, flying machines, anti G or anti rad suits, hyper technology is everywhere, durable and efficient, so that our scientists still cannot admit it. Not even to equal it.

I have long dreamed of this more than modern world, where the anti grav made it possible to lift huge blocks, where the gods piloted machines capable of going in the air, in space, on the sea, under the sea, and the Sumerian text adds: “but also in other elements.” Like what? Crossing the fire? Melting the ice? Breaking through the thickness of the earth’s crust? 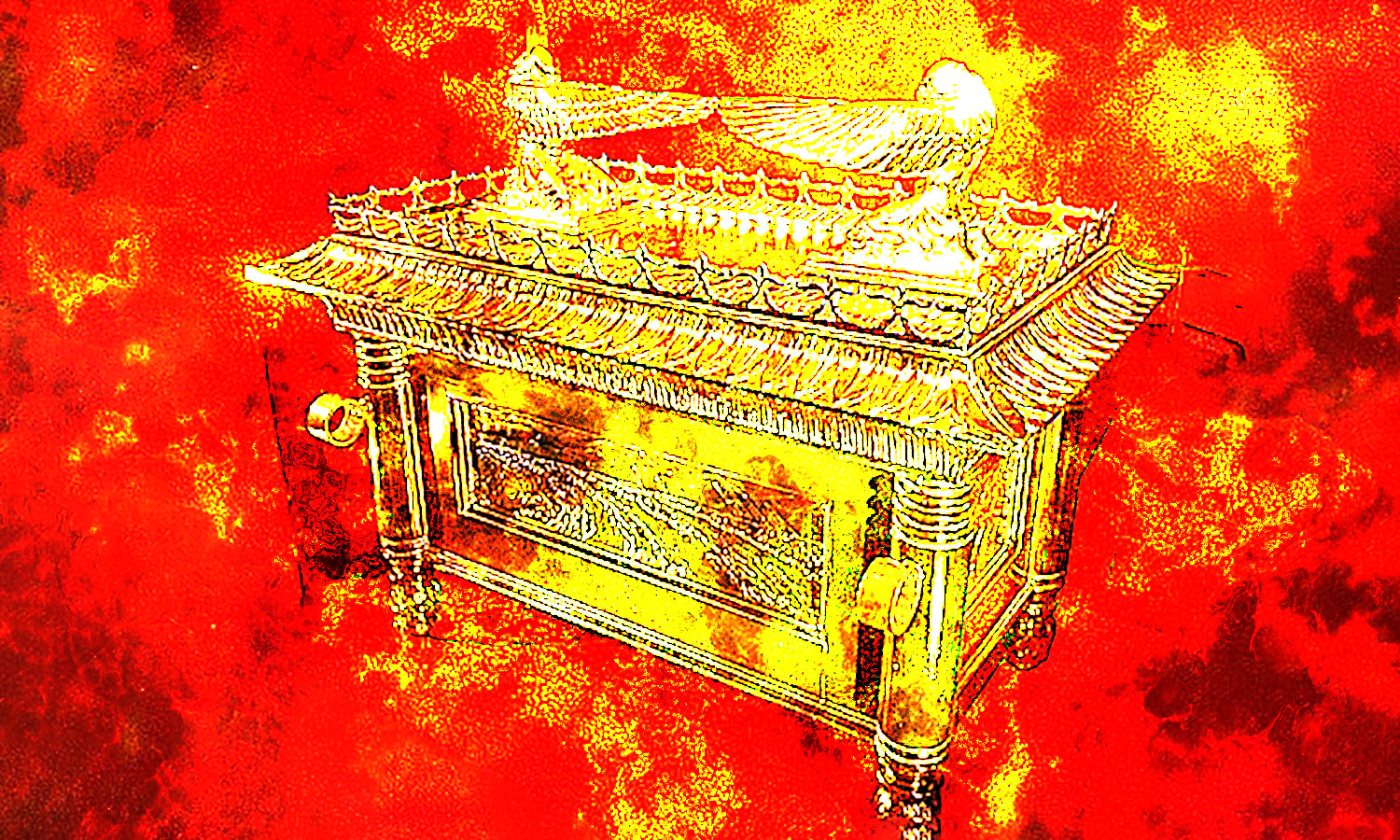 The Levites avoid it…

The Ark presented such a danger that even the Levites approached the Tent of Reunion with great distrust and the very real fear of not coming out alive. The tent of Reunion containing the Ark was situated well away from the camp of the Israelites. When they traveled, the Levites who carried the ark walked far ahead of the rest of the population. “Let there be a space of about two thousand cubits between you and the ark: do not approach it.” (source)Joshua 3:4

Considerable distance for safety zone: two thousand cubits is about 1 mile! That’s how dangerous this device is. In The Numbers, we learn that 250 men were annihilated by the destructive power of the Ark.

“When the Israelites rested near Cadès after their second final defeat in Canaan, 250 members of the tribe of Korah were ordered to bring copper containers to present incense at the entrance of the Tent of Reunion. Suddenly “a fire erupted from Yahveh, which consumed the 250 incense-bearers.” The victims were completely cremated as the Levites had to remove “the censers in the midst of the embers and scatter that fire far away.” Their copper vessels that had attracted the electric shock were hammered into plates and used to plate the altar.“ (source)R.A. Boulay, Le passé reptilien de l’humanité, p.189

Of course, fire does not spring from Yahweh but from the Ark… The fact that it is assimilated with Yahweh shows that in the mind of the editor the Ark works only by the power of Yahweh. That is to say by the famous tables of the Law, fuel refills.

What was the nature of this fire? The electric shock is not the only cause. The Ark emits deadly radiation, and despite Yahveh’s careful description to isolate the Ark with various materials, it seems there were radioactive leaks. “Miriam, Moses’ sister, became a leper, white as snow at the entrance to the tent” (source)Numbers 12:10

In the time of the prophet Elijah, the Philistines took the Ark to the land of the hills in western Palestine. They suffered terrible plagues for seven months. (source)Samuel 1 “Those who approach too close to the Ark develop wounds, tumors and lose their hair, classic symptoms of radioactive poisoning. The ark then passed from one city to another, causing the same ravages, until the Philistines, disgusted, returned the ark to the Jews. Seventy of them, too curious, are immediately destroyed by a landfill.” (source)R.A. Boulay, Le passé reptilien de l’humanité, p.189

These descriptions speak volumes. The Ark is much more than a tabernacle to enclose the Tables of the Law. I have said what I think of the Decalogue, a particularly stupid document of bad faith, which cannot have been conceived by an omniscient god. It is true Yahveh was generalissimo, and not really scholarly as an engineer. The evidence, his advice to isolate the ark seems completely insufficient.

In any case, I find it hard to imagine that the Ten Commandments of the Decalogue had the power to destroy by lightning and atom. The Ark has nothing to do with stone tables, unless it’s something other than rock. Fissile uranium, for example.

Before he was an atomist engineer, Yahweh was a warlord. Under the title of generalissimo, he leads several dozen legions of exterminating angels. Find the rest of his adventures in an article to be published soon, THE PUTSCH OF YAHWEH. 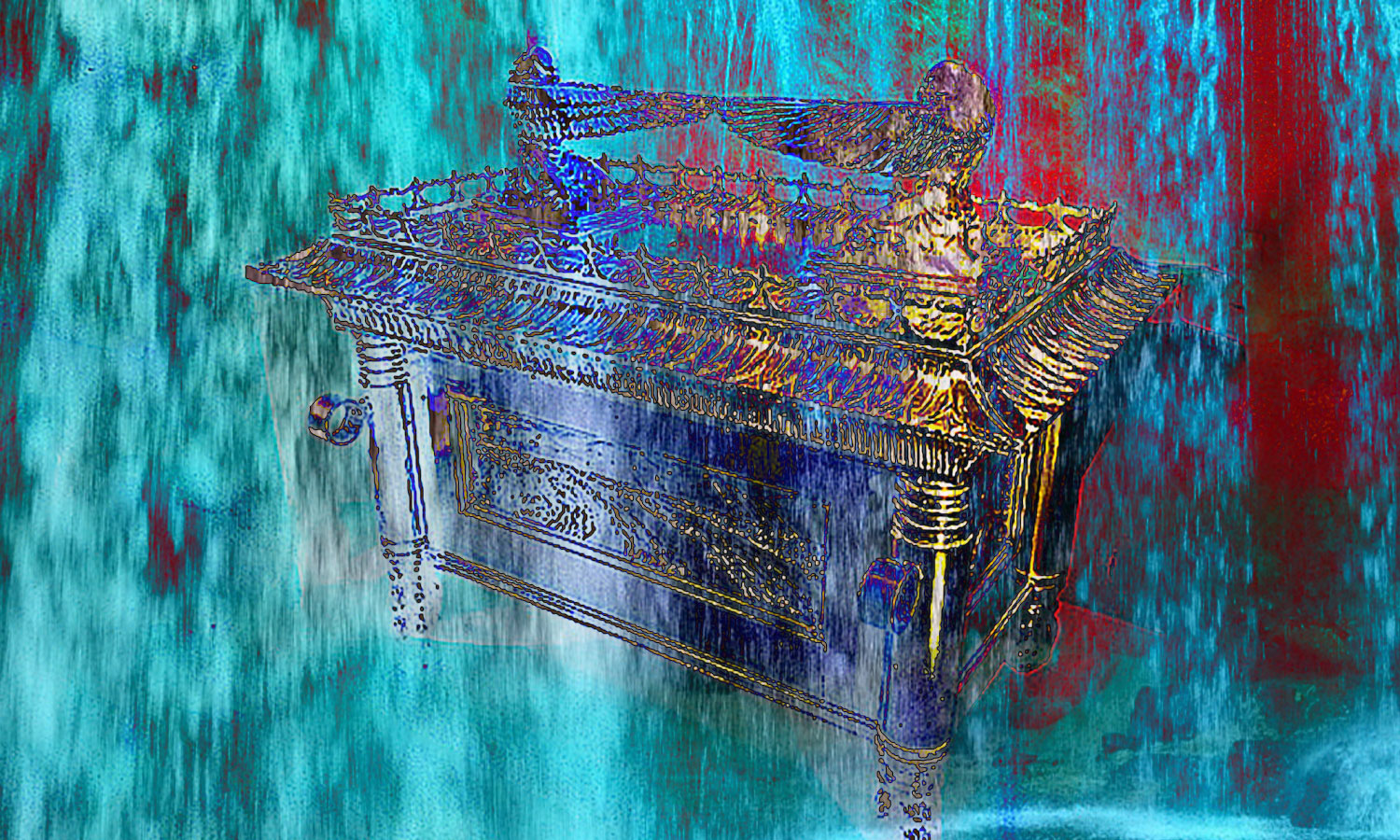 What’s the point of that?

Good question. What is the purpose of this ark of covenant? I have dealt with this point in previous articles The Ark of the Covenant and Moses and the Ark. I ask the reader to refer to it. Without going into detail, the Ark is a device that raises the kundalini. A machine to awaken. But also to kill those who do not have sufficient energy potential. It is about supporting the nervous surge that the powerful rise of kundalini inflicts on the body. Subjected to its electro-nuclear impulses, the circulation of subtle energy passes from the small stream to the powerful tumultuous river that carries everything like straw. Life too, sometimes…

Only the initiates, close to awakening or already awake, could absorb this violent surge. The march, for those, was less high. But accidents still happened. Why didn’t Yahweh give better instructions? Do these deaths serve any purpose, or is it just the percentage of casualties allowed in the event of a coup? For this is what the generalissimo was preparing: a coup d’état against Baal the heavenly Aries, the reigning god mandated by Hyperborea, supported by the Great Goddess Ana, known and recognized by the mother house of our creators, namely the planet Ur, Alcor system, constellation of the Great Bear: Ursa Major.

Maybe Baal the Black Ram was not so mandated that we want to believe him, as we will see in a future article…

Baal the Aries is one of the many names given to Rama. Son of Hyperborea. Generous giant. He looks like Enki or Prometheus. There are so many giants in our very distant past! Rama is not a man, he is a god. Not a shepherd, not a shepherd, not a druid, not a preacher, not a general, not a conqueror, not a seducer, yet he was all that. Even Buddha, on top of that.

While YHWH… Shame! Sad pedigree. His CV is two lines long. He has no contacts on Linkedin. Less than 100 followers on Facebook. In short, no one would have bet the slightest kopeck on this challenger out of nowhere with his damn angels. Fortune of war …

Where is it now?

As we can imagine, these repeated setbacks have earned the Ark a bad reputation, commensurate with the damage committed. Years pass before David decides to bring it back to Ur Salem. Such was called Jerusalem at that time.

During the transport, a Levite wants to hold the Ark that slides from the chariot. He is killed in the moment. This last discharge had to empty the last batteries of the Tables of the Law, as Boulay tells us.see his quotations because the Ark remains inactive in the days that follow. 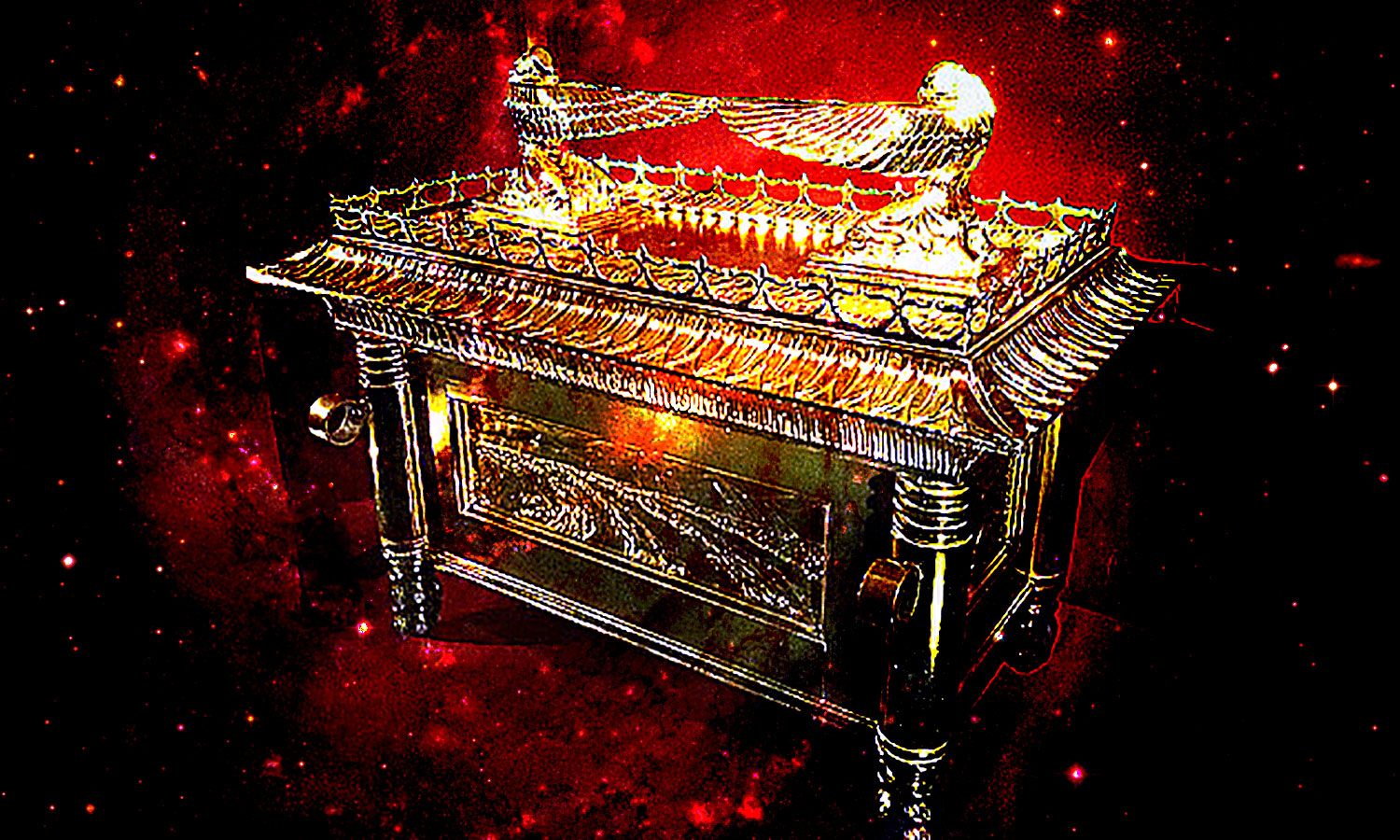 But not forever, it seems. “King Solomon built his temple to house the Ark. It remained there until 550 BCE. Before the arrival of the Persian troops, she was transported to Elephantine Island on the Nile, then on the Blue Nile to Ethiopia. A temple was built in Axum, capital of the Queen of Sheba, to remain there permanently. She is probably still there. I visited the Myriam Church of the Ark of the Covenant. There is a fence around the garden and guards armed with machine guns.” (source)R.A. Boulay, Le passé reptilien de l’humanité, p.190

Indiana Jones may have picked it up, but in what dusty reserve is it now stored from which lost museum? And who then will slip in the Tables of the Fuel Law to make it work again? No. When the need arises, a new pair of fuel tables will appear, and everything will be back to normal. Pending question: which god won Terra? Baal the Magnificent or the upstart general? One guess.

That’s it. The sad song of kaliyuga ending.