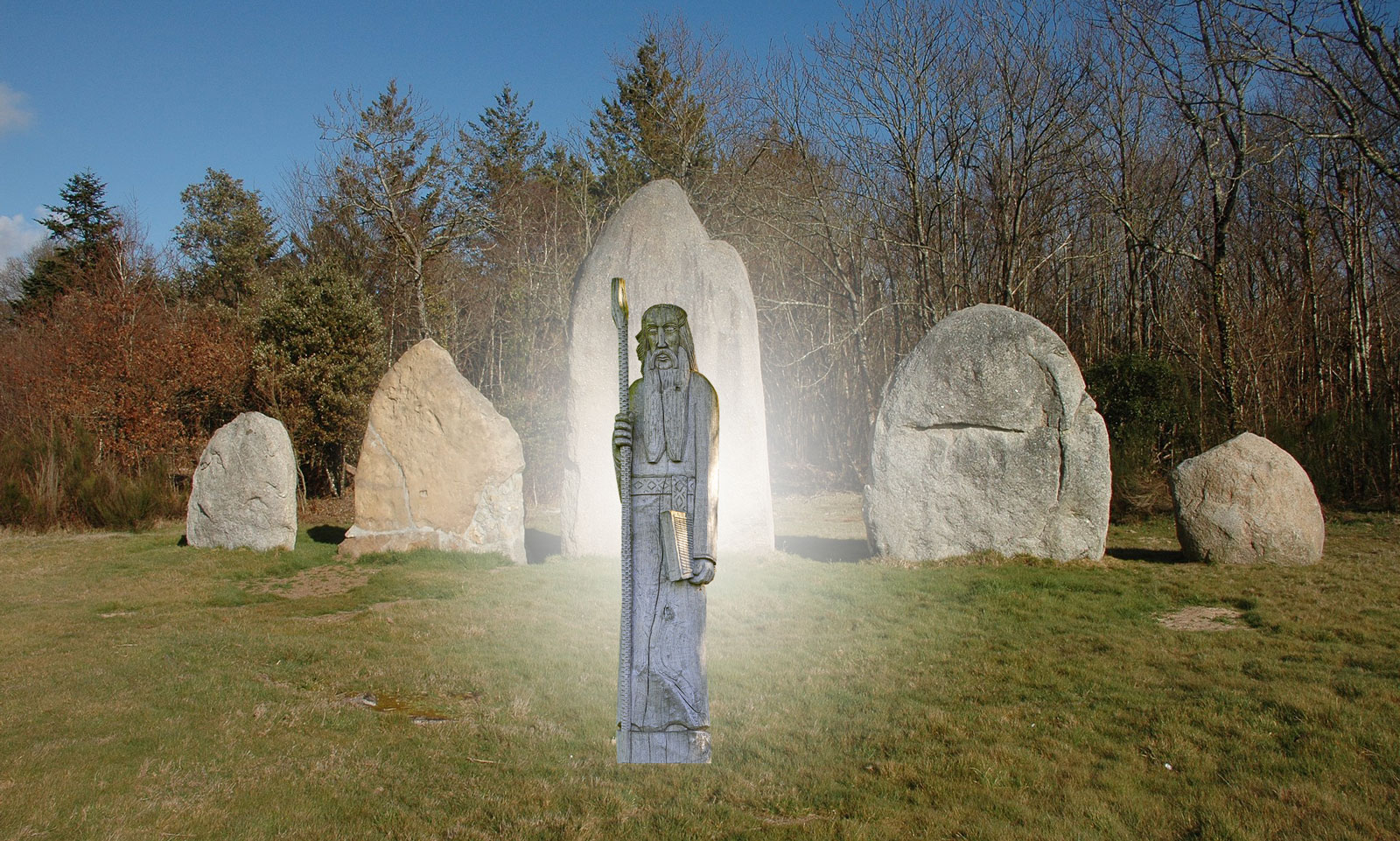 Magicians, wise men, teachers, healers, Gallic Druids still haunt our imagination. From Galicia to Scotland, from Ireland to Britanny, the image of white-robed Druid is registered in the sapwood of oaks.

All French people know the druid Panoramix. But Goscinny, the father of Asterix, does not show the sacred place the druid got in the Gallic life. He was both a teacher, a priest, a healer, or a strategist chief warrior, and above all a magician. His wizard hat makes him dangerous, his science makes him fascinating.

In the tale Táin Bó Cúailnge, the druid Cathbad causes the death of an envoy who spoke without permission, because “No one spoke before the king, but the king did not speak before his druid.” His teacher hat gives to the Druid countless students from all over Europe.

In Gaul, the druidic universities were as deeme as those of Egypt … if not more.

The Druids were the most learned men of the world. (Pythagoras) 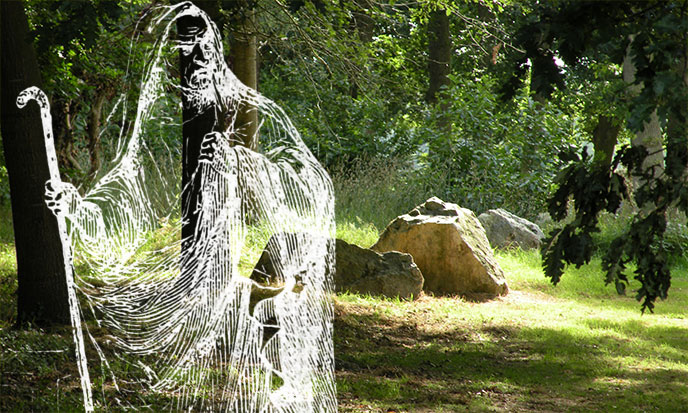 Many young Greeks came there to study astronomy, natural sciences and mathematics, always according to the oral tradition. That is why we have no written text by the Gauls themselves, because druids disdained writing, convinced that the written word is dead and therefore can not give life to anything healthy. (source)Wikipedia

As in Koranic schools, the transmission of knowledge was oral and students knew by heart thousands of verses and natural laws. The only sources are in Latin, mainly the Gallic Wars of Julius Caesar. But on the subject, Caesar is not trustworthy at all. For military and diplomatic reasons, he had to justify his massacres in the eyes of the senate, so he lowered the degree of civilization of the Gauls.

There are also late sources, as the Welsh and Irish texts, dating from the Middle Ages, but reliable for some authors. 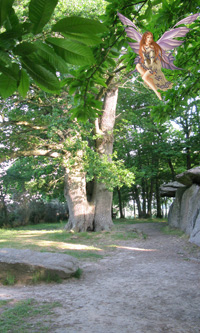 Since the Romans, the word Druid was associated with the oak, because of the druidic rites on this tree. Philologists have shown that this specifically Celtic term, druid, present in both the texts of Julius Caesar and those of the Middle Ages, came from “dru-wid-es” which means “very knowledgeable.”

Note, however, that oak is said derw in Breton, dervo in Gaul, daur, dar in Irish. In Welsh, oak is said derw and druid, derwydd. Although evident, this link is denyed by Guyonvarc’h and Le Roux. For these old style experts of Celticness, there is no immediate possibility to connect the Celtic name of druids to that of oak. They are free to believe.

As I am free to believe that Druidism was a religion – or wisdom – long before the Celts. It started with Ram the Enchanter, healer who became famous by eradicating pulmonary consumption that decimated the Hyperboreans.

With what has he struck this infection? With mistletoe gathered on an oak … The mistletoe is the plant of election of the Druids. Its power, they say, is boundless. “Every mistletoe on the oak is regarded as sent from heaven, and the Druids think it is a sign of God’s election of the tree. It is necessary that the crop be the sixth day of the moon, the day which is the beginning of their month, their years, and their ages, which last for thirty years, To which the moon, without being in the middle of its course, is already in all its strength.” (source)Pliny the Elder, Natural History, Book XVI – XCV

Up to infer that Ram was druid, there is only a small step quickly crossed. In this part of the world, he is the ancestor of the Druids, just as in Tibet, at the end of his life, he became the very first Lama and the true founder of Buddhism. The character of Sakyamuni Gautama, the so-called historical Buddha, is a perfect invention. Like many historical facts …
Buddhism was born in Tibet, under the impetus of Rama Ram, who is the founder of Druidism, Hinduism, Lamaism or Tibetan Buddhism, and of Mithraism, for Mithra and Ram are one, or at least doubling. When we know that Christianity is the heir of Mithraism, we see the global importance of the character of Rama.

We found this old latin description of the Druidic religion – a comment which, surprisingly, is not Caesar’s : “Among all the Gallic peoples, without exception, are found three classes of men who are the subject of special honors, ie the Bards, the Vates and the Druids.  The Bards are sacred singers, the Vates are diviners who preside sacrifices and question nature, and finally the Druids, who, regardless of physiology or natural philosophy, profess ethics or moral philosophy.” (source)Strabo, Geography, IV, 4

These three functions represent the three poles of shamanic societies: the art of sacred song for the Bard, the gift of vision for the Vate, and the power to initiate for the Druid. In truth, it is a distortion due to the Celts. They had inherited the ancient Druidic religion of the Hyperboreans who organized society into four castes or colleges. The Celts, obsessed by the triad have brought the four colleges to three. 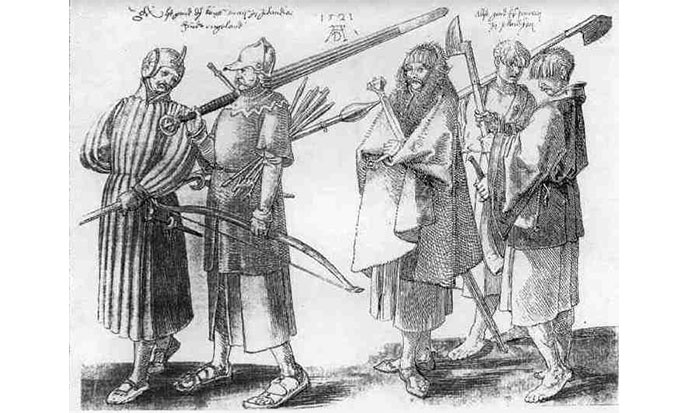 Hence the famous thesis of Georges Dumézil on the functional tripartition of our societies. I had the opportunity to state my disagreement.

Originally, all human societies are based on the model that the astronauts gods gave us and that was taught to us by Rama: functional quadripartition.

In fact, among the Celts, the druid has a dual function: it is mage warrior in battle and wise healer after the fight. Just as Merlin, Gandalf and later the Knights Templars or the Shao Lin monks.

“Ideally, every power is linked to druids and authority of divine knowledge. The king is a noble a mandate of management time on the nobility and the working classes who share the social duties: protecting and respectively meeting the needs of all.” (source)Claude Sterckx, Mythology of the Celtic World, page 54, Marabout, Paris, 2009 Being healers and teachers, the Celtic Druids were also initiators.

He makes a prosthesis to King Nuada who had his arm torn off, he raises the dead by immersing in the Fountain of Health. “Epics are full of these cures, where plants, incantations and potions are used.” (source)wikipedia 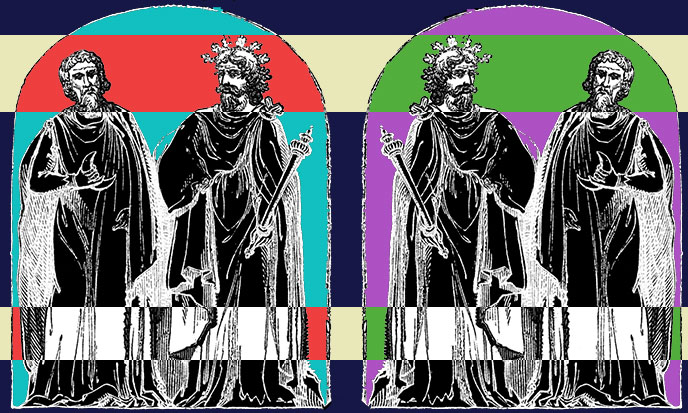 The Celts worshiped many gods, yet the Great Goddess, Belisama, dominated the Druidic teaching. Yet a new religion was growing on …

From the 3rd century AD, the rise of Christianity gave back the old religion of the Mother Goddess, Belisama yet firmly established among the Celts.

Legend says that Merlin, who lived in the 6th century, both pagan and Christian, was the last druid and the first bishop. However until the 11th century and even until the Renaissance, that is to say the 15th century, and even later, there is evidence that the Druids were still practicing their noble art. The priests and bishops sniff in these practices strong smell of sulfur. So the druids were hiding. They did not really want to be burnt on the stake by the Holy Inquisition! Close to the cathedral of Chartres, a curious sign sways in front of shop. It shows a sow that files at the wheel. This sign is not rare in France.

A nice legend of Britanny says that a girl would be changed into a sow to escape rape. More serious is the version of Fulcanelli. He said the sowin French truie means the druidin French, druid and truie sound similar by homophony.

And if it files“filer” in french, it means the druid is a healer too. In the Irish tradition, the file is a soothsayer who lays his hands. Thus at the sign of The Sow That Files, only the insiders familiar with the language of goslings knew they would find a healer druid.

By this trick, druids could practice healing right under the nose of priests without risking the flame of the bundle. Now who is Fulcanelli? Under this name, appeared two books dealing with the esoteric symbolism of alchemy, The Mystery of the Cathedrals and The Philosopher’s Mansions. Legend says Fulcanelli would have come to realize the great work late in his life, i.e. to discover the secrets of eternal life and make Philosopher’s stone that gives control of life and matter.

Then he disappeared mysteriously.

Legend also says that before leaving, the master alchemist would have left somewhere a legacy of exceptional importance. By virtue of a very druidic magic called alchemy, Fulcanelli would have given life to an everlasting creature, as immortal as the old Gepetto’s wooden puppet … 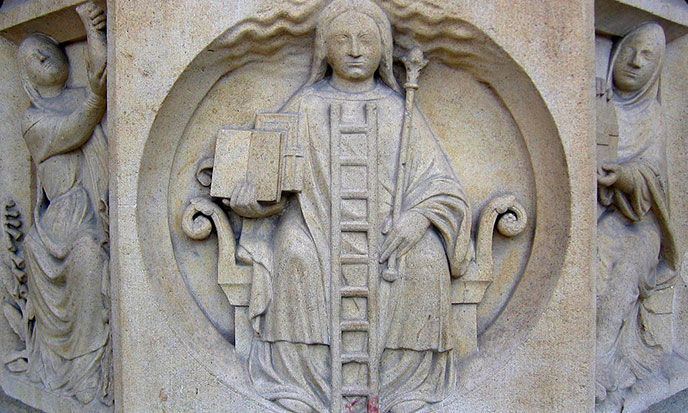