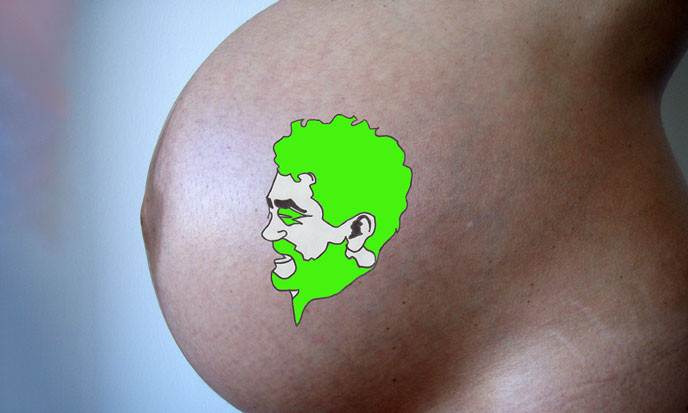 In the treasures of nagualism, there is more of a hidden gem. Carlos Castaneda describes hitherto totally ignored or totally transvestites subtle mechanisms.

Among these mechanisms, the will that comes from belly deserves to be discovered. We all use it unwittingly, and many of us suffer.

The French translators of Castaneda call it either the will or the intention. For my part, I prefer the term Will with a big W.

A Belly To Will

Unlike the conscious will, the Will is not localized in the brain, but in our subtle bodyat the level of the navel. This is an invisible tentacle rooted between the pubis and the umbilicus.

This tentacle is prehensile, tactile and telepath. As the subtle silver cord and as all of our subtle fibers and  tentacles, the Will tentacle is infinitely expandable.

Its powers are limited neither by time nor by space. But almost all of us ignore its existence.

In this world that virtualizes day after day, paradoxically, the field of Reality is reduced to hardware. How can? And what does it mean?

We know that the virtual is not true. We also know, and we are wrong, that our dreams have no reality. We attach importance to nothing but visible and palpable artefacts. Nature disappeared. Inner gardens are on the web. The rough has taken precedence over the subtle.

Our civilization suffers from a lack of soul. What people do is a complete mystery to the eyes of clairvoyant. The only power that society woos and values is material.

Many of us fall into the trap of magical electronic devices, while our real powers are ridiculed by U.S. superhero.

“What power do we get but to shut up and starve?” asked the ready-to-resigned worn-out people. No. Refuse refusal. Encourage courage. And your Will will come. Wake up the hero sleeping inside, O warrior of light. Get up! Stand up!

Warning! After having stolen our soul, this old material world robs us and takes our powers. And it will rob us of our dreams. Virtuality existed long before the virtual.

The web is not the only dream. Absolute virtuality, the real one is the astral one, this amazing world of dreams. No device, no gadgets needed. Totally free.

It is bloody real, you can be sure. Far more real than the real world – which is not. Not to mention this gadget developed by virtual gadgets to transform us into gadgets.

We must resist the enemy for the big robbery is on. 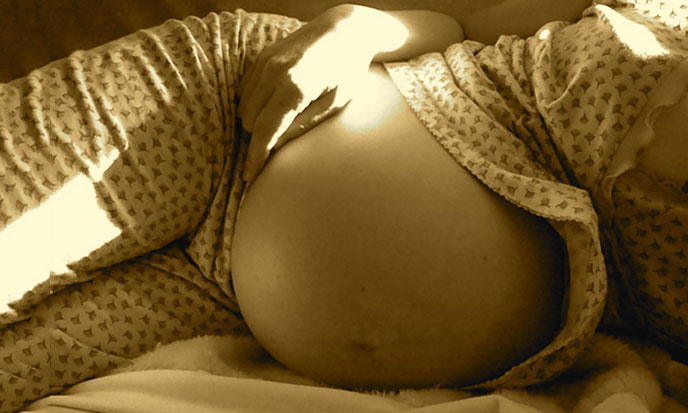 When you’ll forget how to hope, I’ll teach you will. (Seneca)

Say, the Will, this invisible tentacle popping out of the subtle belly, you pick up from what comic? No way, this is no comic nor a remake of Avatar. Biologists know that there are as many neurons in our guts than in the brain.

But why? These neurons affected to nutritional sorting are a thousand times too many. What for? Suppose their secret job is to direct this subtle tentacle that I call the will. Why not? There is intelligence in the will from the belly. And intelligence is managed by neurons, yes or no?

Wait and see, soon we will know.

The Mediamania made us deaf, dumb and blind. Wake up, get out of the ground. You’re not a body of material. You are a being of light in three persons.

Your Will, this invisible and powerful fiber, is just waiting to get to your service, instead of working without your knowing – and most often against your interest.

To harness your Will, you can view it in meditation, as a large burst of light that comes from your lower abdomen, just below the navel.

Let it flow, light and powerful. Then, by a flip of the mind, get into the light. Enter into your glory.

Visualize yourself as a little child, graceful silhouette dancing and spinning in the light beam.

And if you turn in your Will, it becomes soft and docile. You’ll have tamed and harnessed your strongest power.

From that moment, you will learn to use this powerful gift. It will open your door and show your dreams. It will give back to you, one by one, your lost powers. Now the Will is your ally.

A Belly To Act

There are more neurons along the nine meters of the human intestine than in the brain. Assume that our belly is a second brain – or the first – intended to be helpful. What is the use of it?

Assume that the issue has arisen, so assume that the answer was known long ago before being forgotten. In this case, go straight to the conservatory of the lost science, ie the priceless treasures of popular knowledge.

Many expressions revolves around the belly. Like visceral fear. The belly is a center, and it is annoying when it’s soft. The heart also is a center, and when you have the guts, it is a very dynamic productive worker. In the center of the center. The heart is the courage, but have courage not have the heart, it is rather have balls. Or have guts. But having livers, is when you wet funk. Scared, yellow liver fled belly to the ground, or earth … crawling on the belly. Ventre Saint Gris, there’s no way out! Yet one day, we’re all out. Having stomach is knowing digest setbacks. But if the stomach down in heels, it is time to break the seed.

Demonstrate pellet is to make the stomach. If it really surprising, one is flabbergasted.

Anatomy takes a big hit. What else ? The belly is not related to intelligence. It is linked to the courage, fear, it is a center, a sun that shines. Digestive function does not justify so many neurons. Although the food sorting is a daunting task, but she justifies such neuronal debauchery? I do not believe him.

It’s understood anyway, belly not only serves as a pantry. This true function is even underrepresented, as popular wisdom avoids the obvious. In vernacular French, belly combines functions that go from courage to the most bestial fear. It’s in the belly that the fetus grows, and this function then requires prodigious amounts of intelligence. Or not. Does a flower need intelligence to bloom?

The belly expresses everything related to the vital, visceral, in Tripal. He compass office for the body, it is the body on its own, the body opposite the head.

It does not steals the show at the head, the seat of conscious thought, but his head can do nothing: we do not philosophize on an empty stomach, the saying goes.

As popular knowledge readily associated belly courage – or cowardice – it is questionable whether the neurons intestines do not play a role in courage, precisely. When the head is watching, belly throne. It is assertive, seat strength, authority and courage.

I know, from personal experience since childhood, the belly is the seat of the will. Anyone who wants to show implacable will to address in vain to his head to this challenge. He listens to his belly, two centimeters below the navel, it stimulates the area every night before falling asleep, and soon the vigorous tentacle of will be deployed to accommodate it in its light.

Parodying the fox in The Little Prince: “The essential is invisible to the eye. One sees clearly only with the heart.” (source)Antoine de Saint Exupéry we can write: The essential is unreachable for the mind. One wants willingly with the belly only.

A poem by Jean de La Fontaine put this evidence in music, and the most beautiful way: The Stomach and Members. Note that in this fable, La Fontaine nicknamed stomach Messer Gaster. 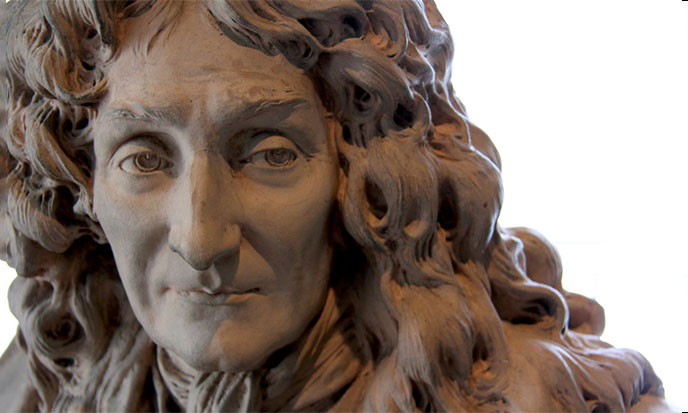 Had I done right,
My work with royalty I had begun ;
To view it in a certain light,
‘Tis Master Gaster’s t image quite,
For all its wants through all the body run.
Each member of his work becoming tired,
Resolved to lead, as gentleman retired,
An idle life, like Gaster, fat and fair ;
“ Without us,” said they, “ he must live on air ;
For him, indeed, we toil like burdened beasts,
And fast ourselves to find him feasts :
Let’s strike, he wants us to, and break the thrall, ”
They said, and suddenly revolted all.
The bands refused to take, the tongue to talk,
The arms to labour, and the feet to walk ;
“Let Gaster for himself provide !” they cried :
But soon their error they found out, and rued,
For every member now in languor sighed,
The heart no more fresh blood renewed.
They saw the sluggish belly, for its food
Did more than they towards the general good.

To Royal Grandeur this may well apply ;
It takes and gives again, and you and I
And all work for it ; true, but all in turn
From it their living earn.
It gives the workman bread, its sovereign graces
Make rich the cit, reward the magistrate,
Maintain the hind, defray the soldier’s state,
And scatter plenty in a hundred places :
Support us all in fact alone.
Menenius spoke well that day,
The Commons with the Sonate picked their bone.
“This Senate has the whole command,” said they,
“The power, the wealth, the honours, and the pride,
While we have nought but evil on our side
As rents and taxes, rates and warlike toil.”
And now the angry folk had passed outside
The walls, agog to seek another soil.
When this Menenius was able
To show them by his wit how like they were
To those most stupid limbs, and then and there
To bring them back to duty by his Fable. 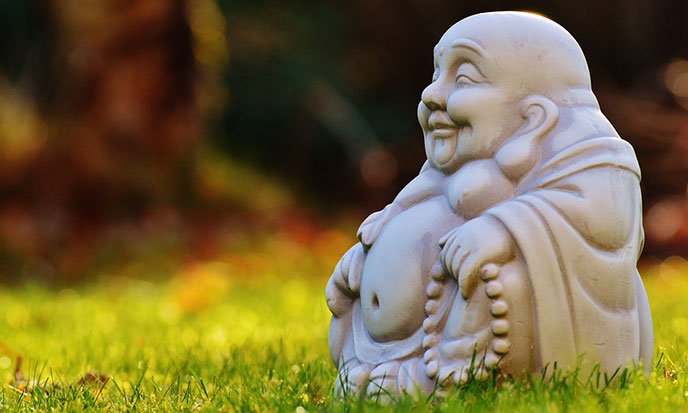 The truth is that Chinese Buddhism, like the Nagualism of Mexico, places a serious emphasis on the importance of the belly. My experience has given me a thousand proofs of this excellence.