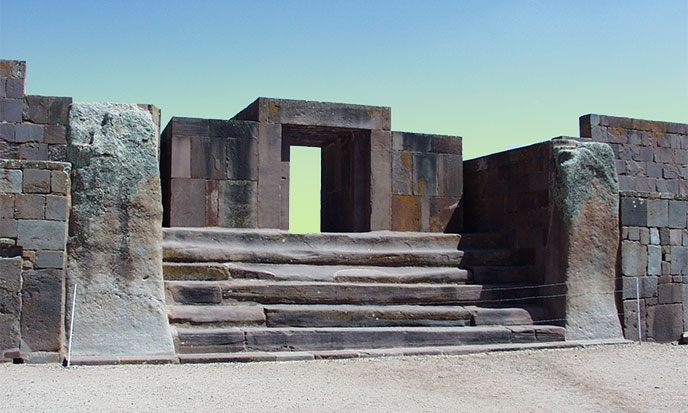 Tiahuanaco – or Ti Wanaku – City of Gods, Queen of the Andes was as powerful and old as its Mexican rival of the same name, or almost: Teo Ti Wakan, the city where men become gods.

Throughout history, the Cyclopean architecture of this city has highly amazed the explorers. “We must now say something of the great and incredible buildings of Tiahuanaco. The most admirable work found in this place is a hill made by the hand of man, so high that it causes astonishment.

This admirable work is the pyramid of Akapana. In order for the heap of earth not to crumble, the IndiansProbably not them, but their predecessors. Read Atlantis’ Races put large masses of stone on its basis. From the other side, you could see two giants carved in the stone.

They had clothes trailing on the ground and the head covered, all very time-worn and apparently very old. We could still notice a very long wall which stones are so large that one cannot understand how human forces were able to transport them there. But the most remarkable are two large stone doors, carved from a single block. Even more wonderful, these doors are laid on stones so large that they reach thirty feet long, fifteen feet wide and six feet high(about twelve meters by six meters by three meters) in a single piece.

It is impossible to imagine which tools or instruments have been used to sizzle such doors, especially since these stones must have been incomparably greater before their implementation.” (Source)Garcilaso de la Vega , Spanish historian and conquistador, 16th century Another conquistador wrote: “I asked the natives if these buildings were built at the time of the Incas. They laughed, saying they had been erected long before and … that the ancients said that all we can see there had suddenly appeared in one night” (source)Piedro Cieza de Leon, Spanish conquistador, 16th century

Another legend says that “these stones had been miraculously raised. They were transported in the air to the sound of a trumpet.” (source)quoted by G. Hancock, Footprints of the Gods, p.76 This is not unique at all, this reminds of the biblical story of the trumpets of Jericho. Certain sounds, certain frequencies known by the ancients had the power to cancel gravity. The exact frequency is still unknown to me but I know the range and the note: this is an F sharp. Tenor in the harmony of the spheres, the earth resonates in F sharp.

The study of the structure, texture and range of sounds is full of surprises. The sound can heal you, but also turn you mad, into an amok who is capable of blind murder. Sound can break glass or crystal, as well as the strongest concrete. Sound can destroy beings as well as objets. Sound can hypnotize, atomize, exorcise. Sound can lift, carry, propel heavy loads in the air. It can also move anyone when it is music.

But its emotional power goes far beyond music. Of course the emotional impact of music is related to the cultural context of the auditors. Sonology (a new and still underground discipline) studies the unknown properties of sound, in order to reproduce them properly. Several researchers among my friends are absorbed in this exciting but dangerous exploration, like all new experiences, thus requiring meticulousness, intuition and extreme caution.

As far as I know, none of this research has been the object of a publication yet.

Tiahuanaco, the celestial organ, would it have a special connection with the F sharp? Who can tell? Who can hear by his third ear the symphony of lightning and the cantata of cataracts? When the storm raged, its multiple harmonics echoed by the mountain must have created a spellbinding sound. This is the way that we have to imagine the divine city in its heyday. Or rather that temple. As its name suggests, the city was sacred from the beginning, even if many archaeologists ignore the fact.

Actually Oswaldo Rivera, the archaeologist who was the director of the National Institute of Archaeology of Tiahuanaco, said: “Tiwanaku had an urban extension of 600 hectares, so that whenever we find something new, we remain speechless. We have no clear idea of what this place was.”

Tiwanaku was a lightning trap

Well I have one, even very precise. It was in this same place that the warrior faced a final test which was to end his initiation … or his life. Precarious refuge in a shelter, housed in cubicle lightning door, the warrior was waiting for heavens’ verdict.

He was waiting to be changed into a god by virtue of terrifying fire from heaven. Or he awaited death by electrocution. Unlike the bite of lightning, the kiss of ball lightning is not fatal.

If the trap lightning works correctly, the flash is deadly burst into fireballs, a globe of white or pale blue light that shines without burning. It is believed to have business intelligence … If we could observe or even get in touch with its essence, one would find the key to the Vril energy for the ball lightning is the heart of its manifestation. Lightning captured by the sacred temple had other purposes: it was used to vibrate the irrigation water and enrich lightning nitrates, the best fertilizer.

It was also used to power the lighting and electrical machines because there was this very distant time. And finally it also served to awaken men, to fill the divine powers … or kill the net. The Vril energy is triple as lightning in his sacred use. For the Lightning trap fulfill its complex role optimally, it is necessary that all parts of the machine work in a coordinated manner. I have described elsewhere the vision that I had on the door of the sun, the great monolith broken by lightning.

This door of lightning is only one piece of the sacred device that was used to capture lightning, flashes popping fatal lightning balls, less dangerous for life. This device occupied the entire city. I also describes the workings that can be observed in a lightning machine, in the case study I did push the trap lightning Avebury.

Therefore I shall not return here except to recall three key pieces found throughout lightning trap: the sensor, the spark gap, and the awakening lodge.
The gate of the lightning was not originally sensor. If we compare with Egypt, including the pyramids date from the same era, the sensor should be a metal lightning rod that crowned the pyramid Akapana, a hill surrounded by masonry.

The dominant archeology has completely renounced to explain why and how this mysterious mound was built up. Fortunately archeo-lovers compensate this mean deficiency …