Countless studies have scrutinized the Great Pyramid of Giza in all its aspects, dimensions, proportions. A summary of these rants is presented below, not as an article of faith which we should absolutely believe, but as a line of thought.

We have to remember how the basic proportional relationships between the Earth and the Moon are encoded in the Great Pyramid as are the Fibonacci spiral, the number Pi, Phi – 1: 1618 – the number of gold and even speed the light! In the perspective where the gods before we would have wanted to leave any evidence of their genius and the extent of their knowledge, what better medium could they choose?

If all the pyramids of Egypt are not antediluvian, the three pyramids on the Giza plateau undoubtedly are, as the pyramids of Dahshur. There would be therefore more than 12,000 years old. In this case, they were not built by the Pharaohs who gave their names. These princes have appropriated already existing monuments, as it was the use at those days. Originally, these monuments were not designed as tombs. As Pharaohs always did, the restorer became the builder, and the Temple became his tomb. The restorer may have raised up a pre-existent pyramid, or remade the white marble cladding. This is probably the only work of Sneferu, Cheops, Chephren and Mikerinos.

A work, however, that time and looters have not respected: the marble claddings have now almost entirely disappeared, hence this aspect of giant staircase that now characterizes them. This is particularly unfortunate, because for Herodotus who had the chance to see them, these sidings were covered with hieroglyphics. Did they testify that this pyramid was the work of Cheops/Khufu? It would prove nothing. Napoleon has carved his figure on the monuments of the countries he conquered. And many pharoahs did the same. Signing is not building. The real builders moreover -those giants I called the Megalithics- have not signed anything. Neither the Cities of the Andes, nor Mycenae, nor the giant Olmec Heads, nor the statues of Easter Island, nor the Celt dolmens and long barrows. None of the cyclopean monuments has any inscription. The Megalithics did not care. Their builders did not worship ego as we do. 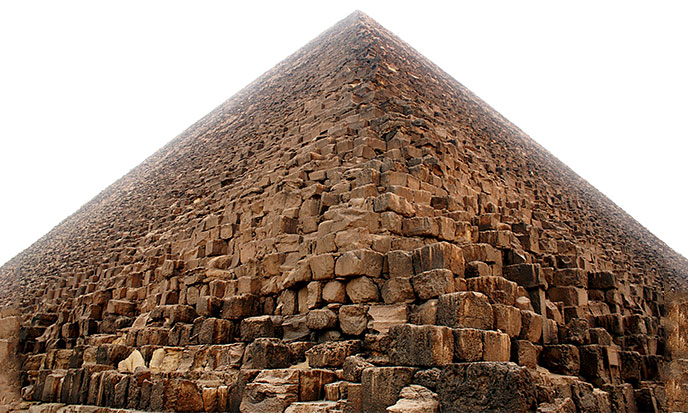 The architectures that survived the great flood do not look like the others. They have at least two characteristics that differentiate them from all other human constructions. They are megalithic, ie made of enormous blocks, either cut or not. They are bare, ie without any ornament or inscription. These two signs, giant blocks, no decoration, prove that the great pyramid was built before the flood: there is neither painting, nor sculpture, nor hieroglyphic in the great pyramid.

No inscription except the questionable “mark of quarryman”: a mark that the stonemasons settled on the blocks to indicate their destination to the carriers. This mark is a cartouche of Cheops hidden on one of the monumental blocks constituting the “bows of discharge” that dominate the king’s chamber. This cartouche is supposed to be the work of a quarryman, but given its awkward type, it may as well be a recent counterfeiting due to the hand of an Egyptologist looking for fame.

Damn forgers! On the contrary, if the cladding has been sacked, it is because it was made of small stones, very useful to build houses. And the great Herodotus certifies that it was covered with hieroglyphics, as Edgar P. Jacobs showed in The Mystery of the Great Pyramid. For these reasons, the lost siding was therefore a much later work. Dating from Cheops, precisely. He is therefore not the builder of the Great Pyramid. It has already stood for many millennia when Cheops decided to restore it. If you believe Edgar Cayce, who was not often wrong, the Great Pyramid is more than 10,000 years old. 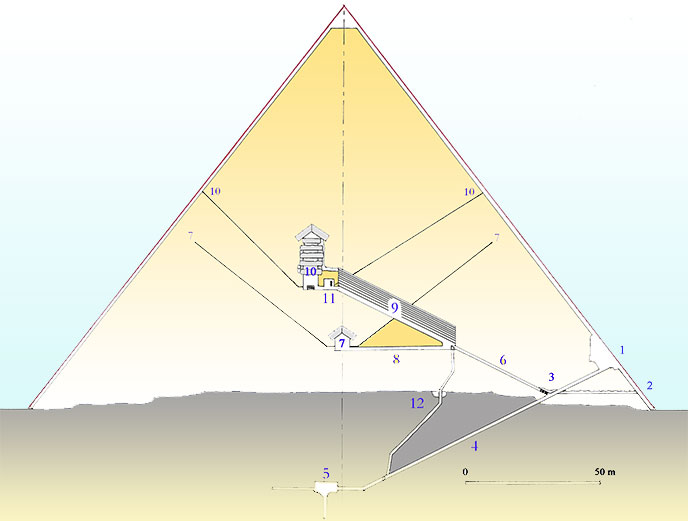 It would have been built in a Silver Age Egypt, by a civilization with a refinement and a science far upper to ours. The great architect who built it would be Hermes himself. A great priest named Ra-Ta, of Sumerian origin, directed the labor; Ra-Ta was simply a previous incarnation of Cayce. In those times, men were still gods, they had lost none of the powers of their minds.  That is this way the Atlanteans made the Great Pyramid.

The large stones have crossed the sky to quietly take place on the foundations. When the impressive building was completed, one hundred years later, it was crowned with a little pyramid in metallic alloy. Cayce indicates which metals composed the alloy. There were gold, copper, brass and “other metals that were used then”. Coincidentally, these are the most electro-conducing metals. The energy of lightning was channeled to the sarcophagus chamber by ducts passing through the mass of the pyramid, which archaeologists call ventilation ducts, for want of understanding their true utility. It seems that Thoth-Hermes has made a divine machine.

Cayce says it was called the Temple of Initiation. Jesus would have been initiated there, spending three days and three nights in the empty tomb. He would have been the only follower to get out of the sarcophagus without assistance, by his own means. The broken corner would be his work! (source)Michael Baigent, The Messianic Legacy Cayce also said that in the very structure of the Great Pyramid is inscribed all the history of mankind until today, which approach the end of times or rather the end of ages, which is not the end of the world.

Pharoah Cheops is especially the Prince of Recycling. But do not put the blame on him. After all, this behavior is not unique, all the pharaohs did. Similarly, the temples can be used successively to several religions, such as the Mosque-Cathedral of Sevilla or the Hagia Sophia Mosque in Istanbul. The cathedral of Cordoba, also known by its former name Great Mosque of Cordoba, is an ancient Roman temple which became church then mosque before becoming Cathedral.

There is little doubt that the now disappeared facing of the Great Pyramid was built long after its erection. It also seems clear that this facing and some other external embellishments were the work of Cheops/Khufu.  The fact that the facing was made of small stones tends to prove that at the time of Cheops -2700 BCE- the relative weightlessness of the era of gigantism – were already part of a distant past. In fact, Khufu is closer to us than he is to the true builders of the pyramid.

For Tradition, Ra was the genuine designer and builder of the pyramids. Extract from the “Law Of One”: I am Ra. The larger pyramids were built by our ability using the forces of One. The stones are alive. It has not been so understood by the mind/body/spirit distortions of your culture. The purposes of the pyramids were two: Firstly, to have a properly oriented place of initiation for those who wished to become purified or initiated channels for the Law of One. Two, we wished then to carefully guide the initiates in developing a healing of the people whom they sought to aid and the planet itself. Pyramid after pyramid charged by the crystal and initiate were designed to balance the incoming energy of the One Creation with the many and multiple distortions of the planetary mind/body/spirit. In this effort we were able to continue work that brothers within the Confederation had effected through building of other crystal-bearing structures and thus complete sort of ring of these about the Earth’s surface – as this instrument would have us vibrate it.”