Your name is Fairies Rock. You throne on a small hill, in the Armor region, in the grove of Rennes’ bocage. You are the pearl of Breton megalithic temples. To find you, we follow an entire network of roads and paths, Retiers, Janze, Esse, and here we are.

We discover you under your two guards, the Round Chestnut and the Triple Oak, that make a green box around you. And you, Cathedral of the depths of time, dinosaur among the pachyderms, you lie modestly between the two living pillars. The approach is accurate, and valuable. Twenty meters from your open mouth, telluric strength, I stood rigidly on the meadow.

I felt on the elastic “skin” of my aura the light resistance exerted by yours: I touched your inner circle. Let’s make a break.

Standing on the first circle, I look at you, path to heavenly Jerusalem. I immerse myself in your image, which leaves your memory the time to recognize me and open. Your first circle represents the outer limits of your aura, beautiful lady of stone and energy. This aura makes about forty yards in diameter. Important preliminary, the first contact between the auras will determine the following. You’re alive, but your life rythm is much slower than mine. We must therefore match.

That’s it, you’ve smelled me, the very light resistance of your aura just melted, you’ve opened to me your first door. A few meters from you, I turn away and head for the Triple Oak, your second guardian. Leaving it to my right, I continue to circle around you in the clockwise direction. After this first round, I would make two more, always dextrorotatory. I stop at the foot of the Round Chestnut, your first guard. I never lack to greet him, sitting on its ball-like stump. 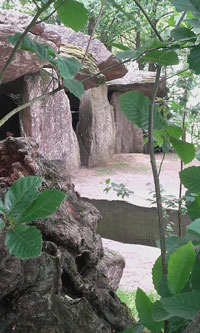 “The Round Chestnut deserves the title of Venerable. Your dear M told me his story. 20 years ago, M had a host table close to you. She felt like your human guardian, so she had the utmost respect for your plant guards. One day when she was reading with me in the memory of the Chestnut, she broke away from the trunk thoughtfully. “Do you think that a tree can live for five thousand years?” she asked me. Baffled by this ludicrous question, I said nothing. The chestnut had just given her his age: “I had five thousand winters.”

From its enormous and tormented stump spring out multiple discharges. One day, one of them, stronger than the others, will dethrone the dead trunk of the chestnut to take its place, as it must have happened so many times! Is it always the same tree? From the same root system, each new release shares the same plant consciousness. Yes, this is the same tree. Can such a process be continued for five thousand years?” (source)Jean-Claude Flornoy, correspondence, unpublished. I resume my way until your second guard, the Triple Oak.

Here is his story of sacred tree as he told me himself. A German soldier, a man who loved you, my great long barrow, planted this tree two centuries ago, to be your keeper. He had brought an acorn from Bavaria, he had kept in his pocket for many hours of fire and blood, without knowing why, like a talisman, a memory of his homeland. As soon as he saw you, he knew he had come only for you.

I guess the Chestnut must have been in a bad state when the man came. He must have feared that the chestnut die, leaving you without any plant keeper. So he donated to the land of Brittany his talisman, and the acorn became this great oak. But Chestnut has been renewed since that time, thanks to releases from its stump. And you’re left with two guards, the Chestnut for its longevity, and the Oak for its strength. I take care to pack my three laps before entering.

Oh prehistoric cathedral, Oh Roche with your pink fairies dancing on your pinnacle by any night of full moon! After fully completing the ritual that serves to tame both of us, here I am ready for you, you are here ready to enter me.

So I stop just before your gap, which is an entrance to the Sidh. Gently, I press my forehead against the ridge stone of your trilithon – three monoliths assembled into an entrance arch.

Here I read in your mind the memory of men who carved and lifted up this trilithon, long after the gods have made and destroyed you. When your builders have left this earth, they did not want your awesome power falls into the wrong hands. Without bothering to demolish you all, they’ve just abandoned you.

Several of your side stones were blown by the explosion of a node of energy that your builders had grown in you. After this explosion, you were useless. Your strength of awakening had dissipated, you were nothing more than a skeleton of large stones and the wind blew between your walls. Long years have passed on your silence. One day, some other men came to see you. They decided to switch you on again, but their powers were smaller than those of the gods who have built you.

These men have carved three large stones, well squared, which does not resemble your other stones. With these stones they built the entrance trilithon that has brought you back to life. For a few centuries you have taken back your activity of yesteryear, you have become again the sacred cave, the daughter of thunder. The thunder rumbled on your roof, warriors have trembled under its blows, the flashes have crowned them with the white and violet vapors, distilling all around a powerful smell of ozone.

These men were probably some Tuatha. While the first builders, with far upper powers, belonged to the antediluvian civilization of Atlantis, that of the former gods. These images then fade. Thanks to the relaxation of subtle pressure on my chest, I feel the last door open. I can get into the long barrow. For that, I have to bend down, because the ark of the trilithon is very low. Some prefer to go in by your side doors, which I call your gills, and through which I’d rather go out.

Do not be afraid to stoop very low. In your nave, I can straighten up. As many long barrows less large than you, you have side “chapels”, reminding of the cathedrals. We see that the plan of the temples remained the same for millennia. The rules of the sacred building, found again by the medieval companions, are already encoded in the long barrows. I walk to the holy of holies, the major stone which forms the bottom of your nave, in the place of the choir, and I lean back against it.

I stand on this point of energy that the geobiologists call, in a church, the point of the celebrant. At this point opens the door of the Sidh. Standing there opens the door to the other world. At this point, carried on the stone wing of your memories, I lived countless inner adventures. I saw how the Gauls, for whom your nave was already very old, have used your powerful vibrations. The warriors rose like soap bubbles stick to your ceiling. They wandered there for hours, following visions of light and wind.

These wild men became again small children in the wind of the Infinite. Spinning in reverse time, I saw how the former gods had built your stone arch, and through what powerful magic they had raised you. It was many millennia before the Gauls, in the days of the giants, distant time of mages and wonders. The one who built you was a priest, wearing a white dress.

White skinned, his eyes were slanting, and his white short hair gave glimpses of his scalp. He was about 3 yards tall. But it was not him who raised your cover rocks. In any case, not with his muscles. After a kind of meditation, the skin of his head began to swell, forming a kind of bubble above the fontanel. And this vesicle has emitted a stridulating sound with very low harmonics, whose modulations seemed to frown the landscape like ripples in a pond.

It reminded me of the sound that comes from nowhere, that we can produce by rubbing the Tibetan bowls. It seemed totally out of the sound sphere and invading the image. Young people I had not noticed stood in a circle around a large stone. Their hands surrounded the stone, without touching it, very close to her, while the modulations of the sound made it take off the ground. Guided by the children, the huge stone landed, in a muffled sound, to the place where it still is.

This is your capstone, the heaviest, called the pinnacle. Carried by the sound of nowhere, I saw it floating under the fingers of the young people. I’ve seen other sequences of your building, I saw your commissioning, when you were covered with a mound of earth. These men accomplished great feats, and the crowd coming to admire them made a respectful circle 220 meters from you. To your north-east, on this circle, you’ve showed me the fountain which was sacred to the Celts. 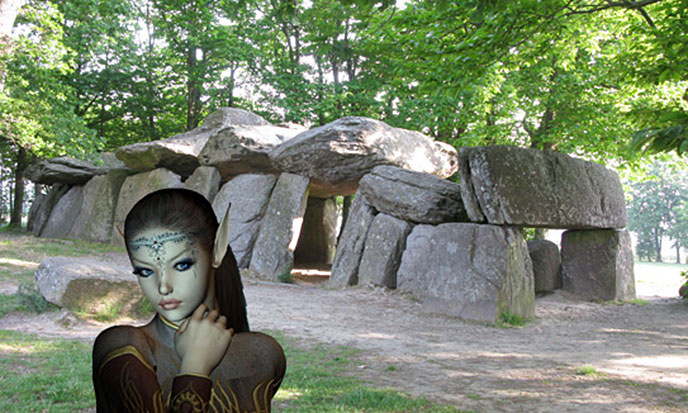 Dear magician of memories, dear Roche aux Fees! At each visit, I start again always the same ritual, which works very well for you and for me.

Every time you gave me trips I will never forget. I just had to come to you with humble heart, open mind and sharp body.

The world is wide but inside it is as deep as the sea. (Rainer Maria Rilke)