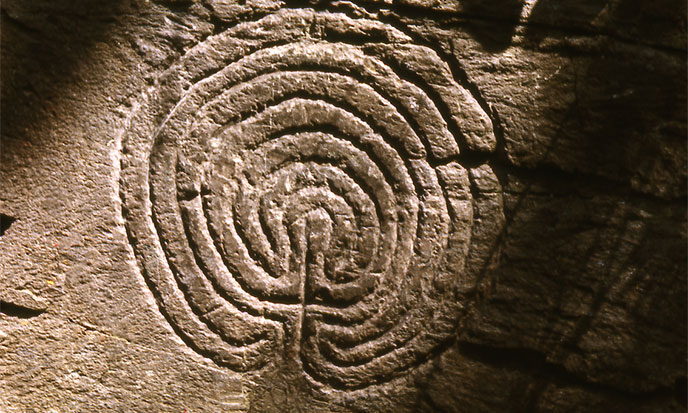 Since the Paleolithic, men have drawn labyrinths and spirals in a defined purpose, that was not yet discovered. Few countries, few people escape this rite. What for ? Thus begins a fascinating study.

Labyrinths and carved mazes flourish from Scandinavia to Japan, from Latin America to South Africa, from Tibet to New Zealand.

But before commiting in it, here is a breadcrumb: Geoffrey Russel lived during 25 years in Sri Lanka. One night, he dreamed of a maze so intensely that he woke up drenched in sweat. Still half asleep, he took a sheet of paper and quickly drew the strange shape that had invaded his mind. Then he put this sketch in a drawer and forgot it gradually, without telling anyone.

In 1962, his wife wrote a book about english country life. While leafing through the book that just came from the publisher, Geoffrey Russel saw in it a picture that reminded him of something he could not remember.

This is the path of a labyrinth carved on a rock in Tintagel, Cornwall. Suddenly, he remembered his adventure. Delving through the archives he brought back from Sri Lanka, he found back the drawing sketched after his dream… It looked point by point like the Maze of Tintagel.

Therefore, his vocation was born: Russel devoted his life to the mazes carved on megaliths, and to labyrinths lying on the floor of Romanesque churches.

His conclusions are clear: “The journey through one of these labyrinths is a regeneration for soul. These sinuous drawings are stages of a long initiation. I even think it is dangerous to go directly to the labyrtinths’ center, without priorly clearing every initiatory stage.” he said. (source)JLB@france-secret.com Dangerous, really?

Maze is called ‘dédale’ in French, like Dedalus, father of Icarus who traced the labyrinth of the Minotaur.

As for labyrinths, they are named after Lope-rohounit, an egyptian temple where there was one that laymen had to pass before their initiation.

After the Crusades, most churches got one labyrinth, materialized on the ground by slabs of different colors. Believers call them ‘paths to Jerusalem’.

We can still find marks of them in Chartres, Reims, Amiens, Bayeux, Sens, Auxerre, Poitiers, Guingamp and Saint-Quentin, in France. But what could be the kind of dangers evoked by Russel?

In some cases, the answer is clear: they are telluric currents amplified by movements that makes the body to follow those of the labyrinth. French researcher Louis Charpentier spent his life trying to penetrate “the secrets that Earth, throughout its history, bequeathed to the curiosity of men” as he said. “If we think about it, any body moving in a magnetic field, acquires special properties. Thereby we produce electricity, by rotating a rotor within a magnetic field, natural or artificial. Soft iron magnetizes in it. Turning in a magnetic field, in a determined way, causes determined consequences.” We also know that the human body, immersed in these fields, for example in the coils of a solenoid driven by an electric current, and then immersed within a violent magnetic current, suffers a deep influence acting on his body (induced fevers). For ordinary people that could not make the pilgrimage to Jerusalem, nor to Compostela, going through the maze, this ‘path to Jerusalem’, was just the same.

Maybe they were right. The important thing was to go through the whole maze. And we had to do it without shoes, not out of penitence, but in order to make a direct contact between our feet and polarized stones, real batteries of the current’s virtues.

“Take off shoes from your feet, says the Scriptures, because the place where you are standing is sacred.” Note that we take shoes off in mosques. And the Gypsies dance barefoot on sacred Earth.” (source)Louis Charpentier, The Mysteries of Chartres Cathedral  Echoing an old but durable custom: the procession. This ritual march was done during religious feasts, in the spring during ’rounds of Easter’ leaded by bishop, but also in May and the 15th August, for the Virgin feasts, which coincide, as if by chance, with the times of the great pulsations of telluric current.

Thus, the new religion followed the footsteps of the old one, the one of Mother Earth, the old religion of the druids.

The Middle Ages married the christian faith with the old druids’ religion. But Christianity did everything to demonize the old ways, as the art of dreaming, magic, healing, divination, and other ancient practices now called witchcraft and punished the stake. 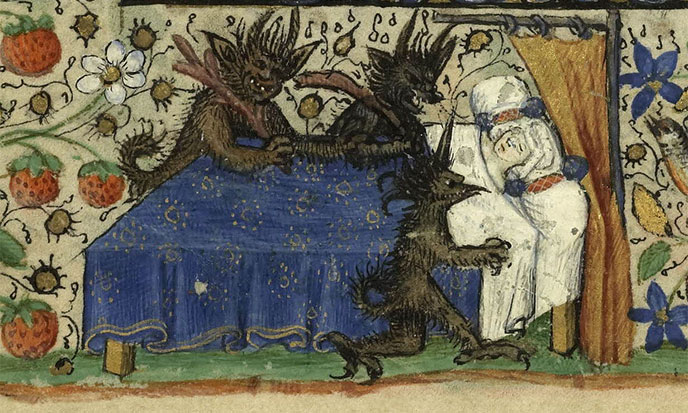 Today like yesterday, mazes and labyrinths are still very popular. There’s a good reason for that.

Deep in the stubborn countryside in Europe, no new religion could erase the ancestral practices and magic rituals that a new science grouped under the name of Geobiology. Similarly, in China, new ideologies have not uprooted ancestral geobiological practice known as Feng Shui.