Christian or not, you think you know Jesus, until you discover that you do not know him at all. His mother, the gentle Mary of the Gospels, so smooth and spotless, could we be more heavily wrong about her?

For some of us, the Virgin Mary is reduced to some distant memories from catechism. For others, she is a joke of no consistence. For others still, she is as solid as the Pont Neuf, which is the oldest bridge in Paris.Authentic Mary, the mother of Jesus, who conceived our savior without any carnal act, the holiest mary, such is the compulsary faith that binds the Roman Catholics, and the followers of the Marian cult – or religion of Mary – even more.

For them, the Holy Virgin is very real. I mean in historical sense and more, in their own lives.

This undisputed Madonna, this Queen of Heaven, Our Lady of Good Help, this star of the sea who also shines on the waves of wheat cherished by Charles Peguy, Our Lady of Chartres, holy guide of suffering people, Notre Dame de Paris, merciful mother who takes in her blue arms those who do love her, Holy Mary who cherish, who cares, who comfort and bless, could you be someone else? This is in any case the theory of iconoclastic scholar and visionary Anton Parks.

The Virgin is not Catholic

After the epic of the Anunnaki he considers the creators of the human race, Parks attacks the myth of Mary in The Testament of the Virgin. In a word, his thesis consists in suggesting that this good virgin is not very catholic. It would be only a pious reproduction of the very first Queen of Heaven, the great goddess Isis, the mother goddess. Other authors have probably said before him, but this time, Parks accumulates an incredible number of evidences that drown the reader.

Already crushed by harsh language considerations that the author describes with sadism, poor reader struggle to follow this polyglot reading cuneiform Sumerian writings and those of Assyria, hieroglyphics of Egypt and the Hebrew sephirot with a sickening ease.
Without ever having studied one !! The reader, though forced to trust his word, is shocked nevertheless to discover that the great Isis was also named Queen of Heaven, what was said Meri in Egypt, or Miriam in Hebrew, or Mary in English.

Would Meri be Mary?

He notes that Mary conceived a child without carnal intercourse, just as Isis / Meri, who conceived her son Horus by means of in vitro genetics.

Could Jesus, too, be a test tube baby? Or even worse, could Jesus be a fable? His father Joseph, the odd missing one who can only be, at best, a stepfather, is quite similar to Osiris, quite absent too. Remember that Osiris was killed by his brother Seth, then cut into pieces and thrown into the sea. His inconsolable wife, the beautiful Isis, brought together all the pieces of her late husband, but one, his penis, which was eaten by a fish. Isis thus brings back to life a sexless Osiris, unable to reproduce.

She conceives Horus by the power of his mind, i.e. by genetics, Parks subtly says.

Similarly, Baby Jesus conceived by the power of the Holy Spirit could evoke a conception in a laboratory. Allez hop! A holy pope in syncope. Wave of suicides among the good cathos. Wait and see, the worst is yet to come. The beautiful story of Baby Jesus could be just copied and pasted from the beautiful story of Baby Horus. Young Horus was called the Mesi, which means “made in the image” of his father. As Jesus was “made in the image of his father” who is in heaven. There is therefore Isis / Meri, model of Myriam / Mary. And also Horus the Mési, model of Jesus the Messiah.

What extraordinary chance! Sorry, I forgot that chance does not exist. No way. 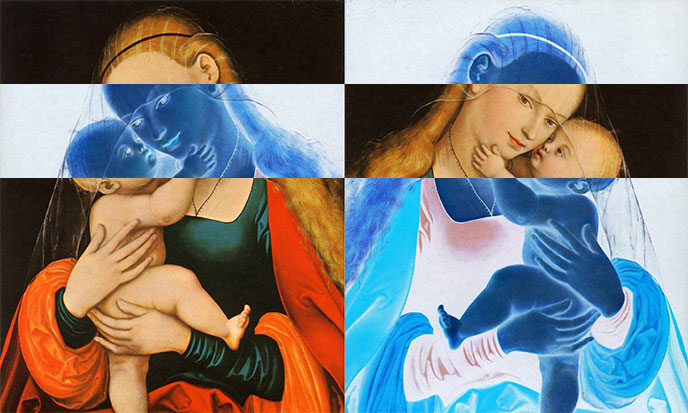 In ancient Egypt, Asar was the name of god Osiris. The University of Cairo is called Al-Azhar, the Hazard… or Osiris? In Arabic, they both sound the same. Doesn’t matter, since Hazard is Osiris. And also: saying that Jesus was made in the image of his father in heaven, means forgetting Joseph, his official father, who had nothing to do with it.

“The biblical scriptures tell us the stories of two distinct persons: Joseph, son of Jacob and Rachel in the Old Testament, and Joseph, beloved of Mary in the New Testament. These two characters have, at first sight, no common point. However, if we assume that the nativity of Jesus resembles that of Horus, we may find in Egypt some traces of the history of Christ. Joseph of the Old Testament is a shepherd like Osiris.” (Source)Anton Parks, The Testament of the Virgin In the Sumerian version, Osiris / Enki is first the shepherd of livestock, and then the shepherdof the human flock he created.

Note that Jesus in turn, will be named the good shepherd of the human sheeps.

Bis repetita placent… To repeat is always a pleasure…

“Joseph’s brothers saw that their father loved him more than all his other sons.” (Source)Genesis 37:4 This hatred towards Joseph is eerily similar to that of the Anunnaki gods towards Enki / Osiris. Parks also notes that Rachel, mother of the first Joseph, presents strange similarities with Nut, mother of Osiris.

Then he takes us through a tunnel of archaeo-linguistic considerations which tire novices and irritate specialists. Too bad, because this author is on the right track. He only lacks the word. At the end of the pavement, we have the nagging feeling that the story of Mary is a clever remake. It is true that Parks knows how to evade the issue… or the tissue? Embroidered by Nobody Knows on an Egyptian or Atlantean canvas, the history of Mary is true end to end, but nothing occurred as we were told.
She was not called Meri nor Myriam. The country was not Palestine or Judea or even Samaria.

His son was not called Jesus either, but Horus. It rhymes, it is similar, good try, well done but …

The right place for a heart is not in the hand but in the chest.