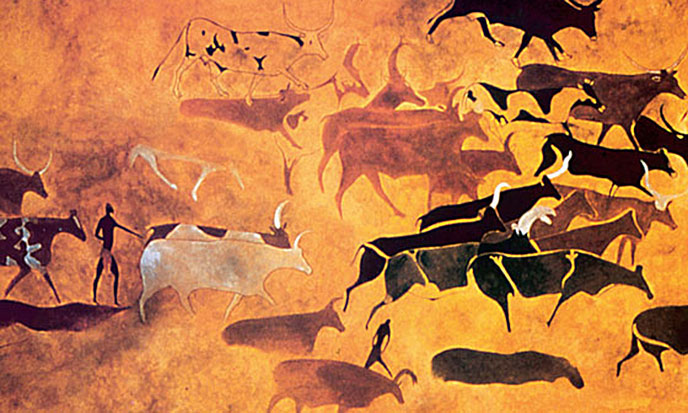 The ruins of an ancient advanced civilization were discovered in Africa. Eden Saga had announced 6 years ago – time passes quickly – that black Africans belong to a very ancient civilization, already developed while Europe was home to only hunter-gatherers. But this time is the best: imagine ruins dating from prehistory !!! Which thus becomes protohistory … No doubt, we must burn the history textbooks!

This amazing discovery was made in South Africa, about 150 km west of the port of Maputo. The vestiges of a major city covered an area of ​​some 1,500 square kilometers. This ancient city, the researchers said, was part of an urban district of 10,000 square kilometers. Also according to the researchers, the age of these ruins is between 160,000 and 200,000 years. The dating of rocks is questionable, often newer than the actual date. We are in the presence of the oldest traces of civilization. So? Why only now?

“The region is discarded and the “circles” are well known to local farmers who attribute them to a forgotten people in the distant past. Far, it certainly is. Not as old date had been set for any urban structure primitive habitat or another. This is a developed civilization. The consequences are enormous. Curiously, no one had ever bothered to learn about these mysterious “circles” and their authors. Until a researcher and author, Michael Tellinger decides to investigate. It provides valuable assistance of Johan Heine, a local fireman doubled a driver. His profession and his passion gave him the opportunity to observe these ruins for years. Heine knows she is amazing and they deserve recognition for their importance.” (source)

The mode of the Indiana Jones hat, out for thirty years, is still in among archaeologists. After Zahi Hawass, after Erich von Daniken, after Sam Osmanagic, here comes Magnificent Tellinger. Kidding aside, he’s cool for Afrikaner.

“When Johan first introduced me to the ancient stone ruins of southern Africa, he had no idea of ​​the incredible discoveries we would do in the following years. The photographs, artifacts and evidence we have accumulated, point to a lost civilization long before all others – not for a few hundred years, or a few thousand years … but for tens of thousands of years.” (source)

“The discovery of an ancient monolithic circular site, the stone calendar in Mpumalanga, proved who is at least 285,000 years, earlier than any other known human structure to date. South Africa has some of the deepest mysteries in all of human history. There are more than 10 million stone circle structures across South Africa, the largest concentration located around Waterval Boven in Mpumalanga, South Africa.” (source)

Among the countless stone circles, there is also a megalithic complex called Adam’s Calendar. Adam’s Calendar is the flagship of the ruins. This spectacular ancient site is aligned with the cardinal points of the planet Earth, the solstices and equinoxes. It’s always calendar function with respect to the shadow of the setting sun, which is represented by the largest central monolith beside him. It has been dated with certainty over at least 75,000 years according to several scientific assessments. It could be the oldest structure of the Earth closely linked to human origins. (source)

“Many gold mines are located in the vicinity. Former Africa called the birthplace of the Sun, or Inzalo there Langa. The shamans saw it as a sacred place where humanity was created by the gods.” (source)

It may well be that this is the case, if one believes the Sumerian tradition. The Assyrian tablets explain that the gods created the human being need labor, and that the first task that was assigned to humans is the work in the mines of South Africa. Here in Maputo, among these stone circles, the first human worker could have been designed and built. Yes, it is so obvious it is such an evidence I wonder why not a single archaeologist noticed before. According to our author, Adam’s calendar would prove that our planet has undergone a change of polarity. The north-south orientation of the planet would have been reversed after a failover. This was proposed by Charles Hapgood in 1950, strongly supported theory by Albert Einstein, like that of Immanuel Velikowski. Both assumptions could be wrong though, as other follies supported by Albert the great.

The Maputo site is built along the same longitudinal line as Great Zimbabwe and the Great Pyramid of Giza in Egypt, suggesting a link between ancient civilizations and builders of three of these sites. I said that the planet was unified and one at the time, due to Gods efficiency to rule human slaves. Tellinger hope these incredible discoveries will finally explode the narrative agreed human history. According to him, only a complete change of paradigm can account for the age of the site.

“I see myself as a fairly open mind, but I recognize that it took me over a year to understand it, and I realize that we are dealing with the oldest structures ever built by man on Earth . For us it is difficult to accept, because they taught us that nothing significant has ever come to South Africa. Powerful civilizations have emerged everywhere, Amlérique, Asia, Europe, to Sumeria to Egypt, and never anything here. Well that was false, completely untrue.” (source)

It is true that one is not very interested in Africa as ancient land of civilization, and this comes from racism and racialism oxydantaux of scientists, who can not accept that ancient civilization could emerge before all the other on the African continent. Yet this is indeed what happened. And it is in the order of things. Is it not in Africa, paleoanthropologists say that the first man was found? Or rather, the first woman, Lucy, whose status has recently been challenged by a much older skull it, the skull of Toumai. Discovered in Africa, too.

With its 3.2 million years, Lucy has long been the oldest known representative of the human lineage. Yet she has now lost this status in favor of Toumai, whose skull above was discovered in Chad in 2001 and whose age is estimated at 7 million years ago. (source)

Racism of western science is clear: it recognizes the African priority, convinced at the same time that Africans have always remained wild. With an afterthought: wild = stupid. For me, the big stupid are those who believe that crap. Wondering who a westerner really is? No one but a domestic subhuman zombified by the TV and ready to accept unclean and draconian rules concocted by a frozen elite. Do not be afraid of elites, their world is dead. The westerners have forgotten. Now they have the duty to awaken. To open their hearts and their eyes. To refuse both violence and pervasive bullshit. To stop being stupid and submissive. And to read Eden Saga.