Tarana is the name of America before white people came. This name comes from Africans who had settled in this vast continent to develop urban and agrarian civilizations at a time when wild Europe was populated by hunter-gatherers.

It seems that large black populations have shared the American continent with Asiatic populations, the Indios, who had arrived in North America by the Bering Strait during an ice age. This is at least the official version of dominant archeology… that rejects any idea of ocean navigation in prehistory, which is no longer a tenable position. These native African populations would have founded the great civilizations of America. (source)Pathé Diagne, Tarana Here is the first and oldest of pre-Columbian civilizations, that of “giant Negro Heads” of La Venta.

These Afro-American populations were called Marranos, marrounes or maroon negroes. They stayed in touch with their African origins, through a permanent secular navigation.

It even seems that they have operated as colonies, paying tribute to the motherland Africa. This settlement already existed in the second millennium BC.But it appears to be much older. And it continued until fairly recent times, leaving many traces in Arabic literature, although the European historians did not seem to notice it. “The native African migrations began early to populate the land of across the Atlantic, from the shipping lanes of north and south equatorial, marked by winds and sea currents favorable and permanent. Since prehistory and antiquity, in contact with the migrations Oceanian and Eurasian, the Africans organized there peopling territories thanks to continuous navigation. They developed there, at the time of the fertile Sahara, characteristic crops.” (source)Pathé Diagne, Tarana

It is true that it disrupts a bit our racialist habits. For the historians of the Enlightenment, it is unthinkable, even obscene, to give too much importance to some beings so close to the animal…

… as evidenced by the Black Code, which unfortunately is not so old. The time has come to give back to black people the control and legitimate pride of its history as rich as ours, or even more… In any case, much older… Builders of majestic cities when we lived in huts made of branches… Prosperous farmers and ranchers when we live only by hunting, picking and fishing. But then Blacks have already passed the stage where we are? Yes. Enough to give nausea to many racists.

America was once a developed country. Indices do not miss: the Mayans say roads through the jungle of Venezuela, probably more ancient, the raised tracks were probably there for rolling gear ; tunnels with perfectly polished walls that run through much of the South America and Central America ; the adjective ” flying snakes ” used by reds to describe White Gods and Black Gods ; the use of the wheel known and mastered in America since the Olmecs ; in these same Olmec, the giant Negroid heads of noble and fierce warriors with typically negroid features, wearing metal helmets with chinstrap ; the incredible knowledge of the stars and space routes demonstrated by the Olmecs -them again- as if they had been instructed by a civilization of extraterrestrial travelers …

The tragedy of Africa is that the African people have not sufficiently entered into history. (Nicolas Sarkozy)

On the African continent, many signs of an ancient development are also present, although white archaeologists have largely ignored. Everything happens as if Africa, alleged birthplace of humanity, was known early development while other races were still healthy and wild life of the hunter-gatherer. I happen to think that blacks in Africa and America have long represented an oasis of civilization in a sea of primitive savagery.

And then the time spent on Black people. Ethnicities are envied , the magics were exacerbated, wars have torn the prosperous continent where there are still today as mineral resources, agricultural, energy … Slowly, over the centuries, blacks fled the cities to find the invigorating contact with nature. Victims of Mad Max Syndrome, they returned to the wild by lifestyle choices, because that’s how they wanted to live and not otherwise.

Blacks in their wisdom should show the right path to whites in their foolishness. Fools – white – who have misconceived black people showed only their ignorance, complacency and racism.

You’re stupid and you’re suspicious. ‘Cause you don’t believe me when I tell you that you’re stupid. (Jean-Paul Belmondo)

The slave trade is one of the most unjust pages of our history. If so many Africans were deported in America as slaves it was firstly because black Africans lived there already, long before the arrival of Whites.

They were called Maranes or Marounes, which gave the French term Nègres Marrons. Then instituted the triangular trade, where the slave ships leaving Nantes, Bordeaux and Saint-Malo in Africa to fill their holds of “ebony” and we called the black slaves. White settlers young continent have used and abused this free labor, exploited and exhausted. The Church of Rome brings its active support. Even worse, and this is there one can talk of conspiracy: the indigenous blacks were treated as the blacks deported from Africa by the slave trade.

As a result, the black Americans, yet residents free and fully-fledged of the American land, were assimilated to slaves and treated as such. They are still considered today as descendants of imported slaves. But the slaves from Africa are, for most, dead without progeny. Their rare offspring can not explain alone the current percentage of black population, including in areas that were never involved in the black trade. Pathé Diagne drives the point: American black natives called themselves Mara or Marrounes and not Blacks. 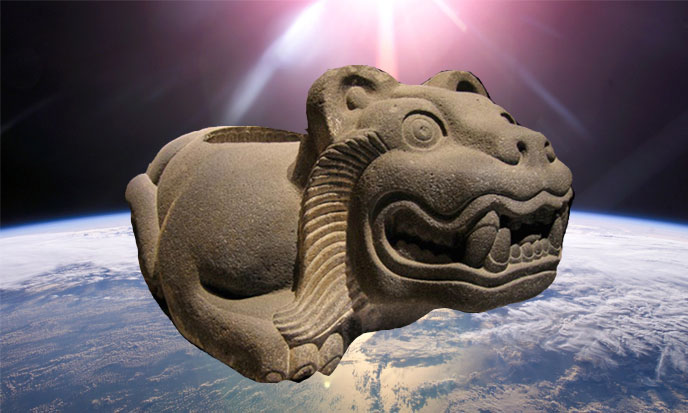 “This is their name, Mara or Maya which named the Mayan people. This is their name, Marana or Marroune, which is the origin of the word marrouns or nigger maroons.” I learned at school, in the Mallet and Isaac, that the maroon negroes were escaped slaves who formed pockets of resistance where they lived entrenched. Another modest invention of the Good White. Their fate was that of the Indians, pushed off their land, then slaughtered or herded into reserves.

The Marrounes or Maya were Africans, they conquered those lands that were theirs, they have built cities and made prosper several advanced civilizations, like that of the Mara / Maya, and that of the Toromagen / Olmecs. As proof, the giant heads of Africans, probably those of deified monarchs, which are the flagship and signature of the Olmec civilization, considered the oldest in the American continent.

The African-American civilization is thousands of years prior to the birth of the Greco-Roman civilization, and even prior to Sumer, the supposed cradle of our cultures. It flourished at the end of the first Egypt, that of the Nubian pharaohs, with black skin. In those days Africa was prosperous and developed, thanks to its American colonies. The Nilo-transatlantic space was then inhabited by the followers of the god Ra or Ro of the Nubo-Egyptians.

“The Mara-Maya, the Taragen, Touareg or Aztek founded on the other side of the Atlantic the culture Mehewa, Toromagen / Olmec or Mara-Maya. These are the same people with ramanic worship who on both sides of the Atlantic have established metropolitan areas with the same names. They built the same Permar or pyramids which are identified as Mbanu, they carved the Colossus of Memnon, Nubo-Egyptian work, and the Olmec giant heads, which are of the same workmanship and refer to a single culture.

There are the African pyramids named Mbanu, Torogale or Teocali on both sides of the Atlantic: in Kulikuli, capital of Jolof of Senegambia, as in Cuilicuili, metropolis of the Mexican Mehewa, but also in Warakas / Warhoh, another metropolis of Jolof, as in Oaxaca / Warakas, another metropolis of the Mexican Mehewa.” wrote Pathé DiagneTarana or Pre-Columbian America, An African Continent, published by L’Harmattan, Paris 2010. I can not write here the few thousand pages of his three volumes.

Using genetics, onomastics and the study of slaves of the trade, Pathé Diagne has just completed a trilogy scholarly, masterful, which needs to be relayed and amplified by more accessible authors. Already, thanks to his research, we know they lied to us about America and its past. Let us hope that with these new roots, far more noble than those of the slave trade, African American populations find justifiable pride. The Maranes or Mayans belonged to a conquering nation, bold sailors, settlers, builders.

Their martial vocation reads enough on the noble features of the Olmec heads. Even if the white racialist state wanted to cloud the issues, it was written that sooner or later justice would be done to them. The election of President Obama participates in this legitimate rehabilitation. If tomorrow the Chinese, in turn, invade America, will they rely on the former owners, the indigenous blacks, to dominate the whites? So true is it that history stutters… 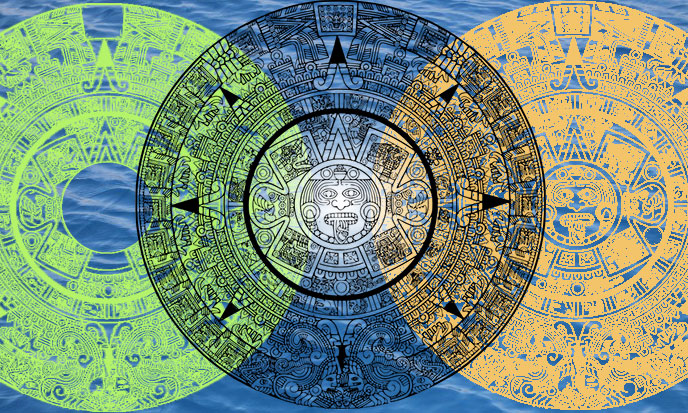 Besides, the notion of native on his ancestral land has it still some meaning before globalization, hybridity, mixing of cultures? And the notion of native as first arrival is a nonsense in the face of millions of years of human experience… Countries have been invaded a hundred thousand times by each race in turn. The notion of primary forest denotes the same ridiculous. Primary in the sense of very old, yes. But before that, on this same location, there were seas, sands, shining cities, ash, lava, magma, and other seas…