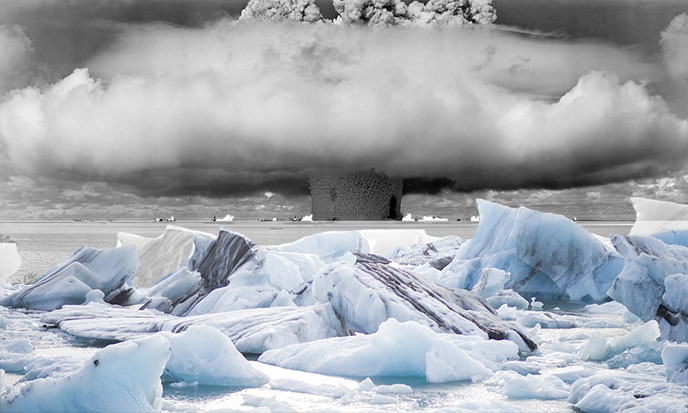 One thing is certain: the humans who lived one hundred thousand years ago were people like us. All the same. They take the tube to go to work every morning, my friends. Life was bright and gay, wingless ships were sailing in the sky.

Suddenly someone told them: “Hide yourself under the ground, you kids. One god fucked up, it’s nuclear winter, it is going to last forever. Park your cows, pigs, brooded under a good thickness of earth, then wait and see.” Dear former gods! Always willing to help.

And the Gods are left in their boats of heaven until it warms. The story in question was going there too long. And the winter did last. It lasted several generations. Several civilizations. Several worlds. Hidden under thick clouds of radioactive dust, the land remained without seeing the sun for a hundred thousand years. On the surface of the earth, all life had disappeared. Animals, plants, all living things had been replaced by a coat of gray dust, deadly and stinking.

Life had taken refuge underground. The gods were able to predict the absolute horror, they dug thousands of miles of tunnels and underground rooms, most of which still exist. Thanks to the inexhaustible energy pril, men have recreated a biotope, favorable to life environment. They are installed in pairs of animals, all useful plants, and they are held for a hundred thousand years of solitude. They terraformed the depths of the world as others have terraformed this planet …

Now imagine that same distant past, one of the gods did not want to – or could not – leave the land in his boat in the sky. For example, the god who created us, Prometheus. Or rather the Sumerian model, Ea Enki. He would not abandon his creatures, dear little big father.

He has warned men, Prometheus who thinks fast has organized everything, first plants, artificial light, water, underground rivers, then animals in pairs, finally humans. Maximum human. It has been some hard working to dig the tunnels. Everything went as planned. His people had worked with heart and guts. When Apocalypse came, they were ready.

Then Prometheus burried undergroud too. Very deep. And he is still down there. This could definitely be the origin of the myth of the Hell of the Christians, turned upside down as a sock to demonize it, as religions of the kaliyuga can do. Origin of the myth of Hell or rather its Sumerian anti-model, the abzu or the hollow earth which became the domain of Enki. All planets would be hollow, and the internal part, more comfortable, would be reserved for the Gods. Displayed in bad weather and in meteorites, the lower beings live on the roof.

This fabulous myth with moving accent has experienced a resurgence in popularity a century ago with the thesis of the King of the World who lives hidden in Agartha under the mountains of Tibet. “Si no e vero e ben trovate.” If this is not true it is well found. If this myth touches us that deep, perhaps it reminds us of something long forgot. For we were there, remember. Please do not criminalize my delirium but the laziness of your memory. We were there. Remember… Ice Age. Molelike humans.

This endless and overcrowded underground, stinky like the subway at five. We had to spend Gods know how many lives, remember, waiting until the sun broke through the clouds. And the ice begins to melt. Remember the first exit in the sun, a hundred thousand years it was expected. And the gods who greeted us outside, always smiling, so friendly, “Having some hard dwelling, uh? Well, draw a line. No time to cry the past, we have a world to rebuild.”

They happily explained what we have to do and they left again in their UFOs, waiting once we get organized. Braves former gods. That is why we  dedicated to them all these beautiful religions. It’s on account of them if we are here. Never forget we owe them all. Too short a life? their decision. Too small a planet? their ‘Copulate and Reproduce’ order. And even the last ice age, thanks to their atomic bomb.

Despite this fact, we did not renounced the nuclear power so far. Hiroshima, Fukushima, Tchernobyl, ThreeMile Island. “How many bombs must humanity launch and pretend it is just energy?”

That’s life. No need to crucify any god, it is already done. After all the gods are men like any other. Luckily there are women with them. With Heart. One of them, Isis, Athena, that the Sumerians called Ninhursag, one of them was moved by our poor condition of slaves and gave us a soul. All of a sudden the animal robot that we were turned into a seed of god. It is up to each of us to make it grow. Finally, we happened to get through all right. If only we had not forgotten the user manual!

The fact that men derive little benefit of the lessons of history is the most important lesson that history teaches us.