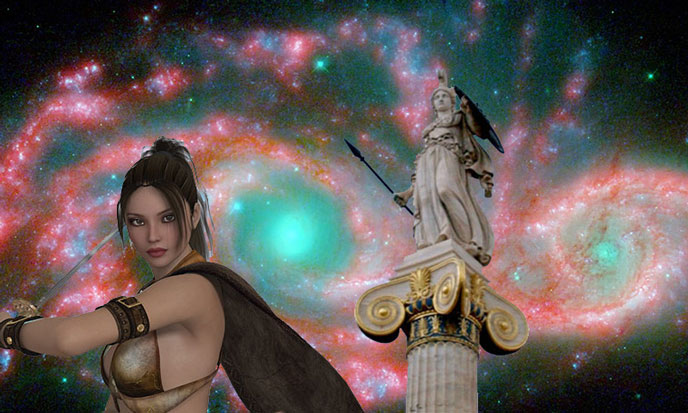 Greek mythology tells us strange stories, which all are based on a true heart. The most fabulous one is probably the creation of Man. For the ancient Greeks, man was created by Prometheus, a Titan, nephew of Zeus, whose name means God.

We have already told this episode. What we did not say is that Prometheus did not want an alter-ego. He wanted a servant, a slave. So why embarrass him with a soul? This servile creature would not need it … But here, luckily, a goddess intervened. In the Sumerian mythology, she was called Ninhursag, the head nurse, head of incubators. In Egyptian mythology, her name is Isis, she is also our mother benefactress. In Roman mythology, she is Minerva, the daughter of Jupiter.

As in Greek mythology, she is Athena, daughter of Zeus. The rebel Athena confronts her uncle Prometheus, the powerful Titan.

Prometheus, like Zeus, is a Titan, ie superman from the stars: coming from the stars – or able to go in the stars. Were Titans aliens or simply a former humankind, as Hesiod says? with the powers and the army of a conquering emperor. He is the supreme boss on Earth. To him they entrusted the delicate task of making a hard worker – i.e. genetically.

Only because he’s the boss … and also because he is the best geneticist among all the former gods. Imagine:  the nurse dared defying the big boss!!! Listening only to her tender heart, she gave man an immortal soul.

According to her father Zeus, it was a bad idea. The former gods wanted followers, not rivals. Prometheus had no doubt that by giving a soul to his creature, AthenaMinerva would unleash the wrath of her father, the god of gods, Zeus the Olympian. But Prometheus loved to tease his dear Uncle Zeus.

According to Athena’s plan, he will add a soul to his creation of pure matter. And that’s quite a fluke. We can hardly imagine in what state of sordid baseness and villainy we would be without this divine gift. 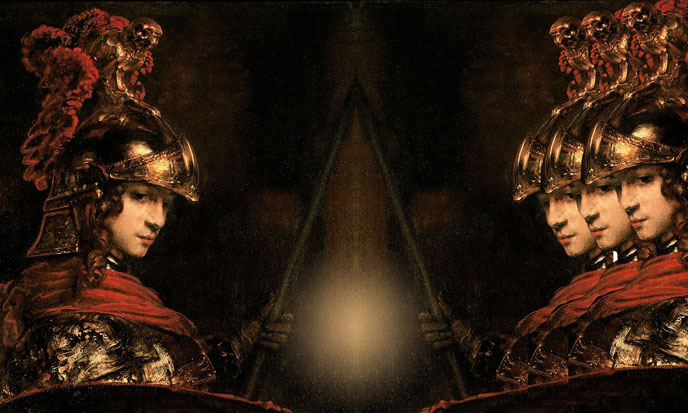 AthenaMinerva O divine benefactress, thank you for giving us this gate to elsewhere, this hope for another future.

Without you, O heavenly giantess, we would be only effective apes. Our ability and our discernment may put us on top of living beings that inhabit this planet. But without you, man would merely be a superior animal. What he is definitely not.

Without you, we would only concern ourselves with material things. Since we would have no soul, why worry about something else?

Without you, we would have ended up believing in a single value, money.

Without you and without this soul that your generous heart gave us, we would only be matter destined to disappear.

Without you, we would love all kinds of different gods. We would be able to kill each other in their names. 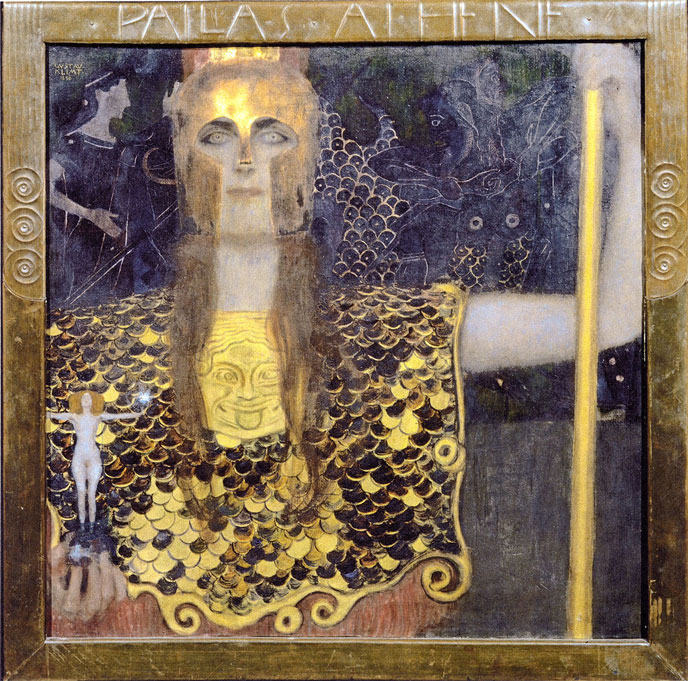 We might even butcher one another for merely material questions, engage ourselves in oil wars, pollute our mother earth as if it were the last of whores starve most of the human species, refuse treatment and medication to those who desperately need some, maim children, circumcise girls or rape them…

“Protect the little people of the earth and the great people of the sea, for you are the guardian of their zoo,” said Zeus also called Elohim, or Yahweh or Ea-Enki, addressing the poor Noah , who felt it was too big responsibility for him.

Oy weg! Why me? he cried, forgetting that many others before him had known such misfortune: to become the plaything of divine arbitrariness. Remeber the abductor of the beautiful Helen of Troy, the handsome Paris – who had lots of trouble. Anton Parks add others describe our creators as a band of aliens who came to exploit our planet that was not fully developed.

They were lacking gardeners, laborers, farmers, architects. And soldiers, as these aliens had alien rivals, thus they needed cannon fodder for their dirty fights.

And then as their divine women did not think only to fucking, they also had to tumble the maids after the war. And what if that defeatist view was completely wrong? These too human gods have still created man and woman in their own image, with a divine seed inside. If they were merely exploiters, why would have they? For my part, I know the former Giants needed us to continue their work on this planet.

They went elsewhere where gravity was lower and they left a bunch of smurfsComparing to their gigantic size, that’s what we are to keep an eye open. The divine smurfs! 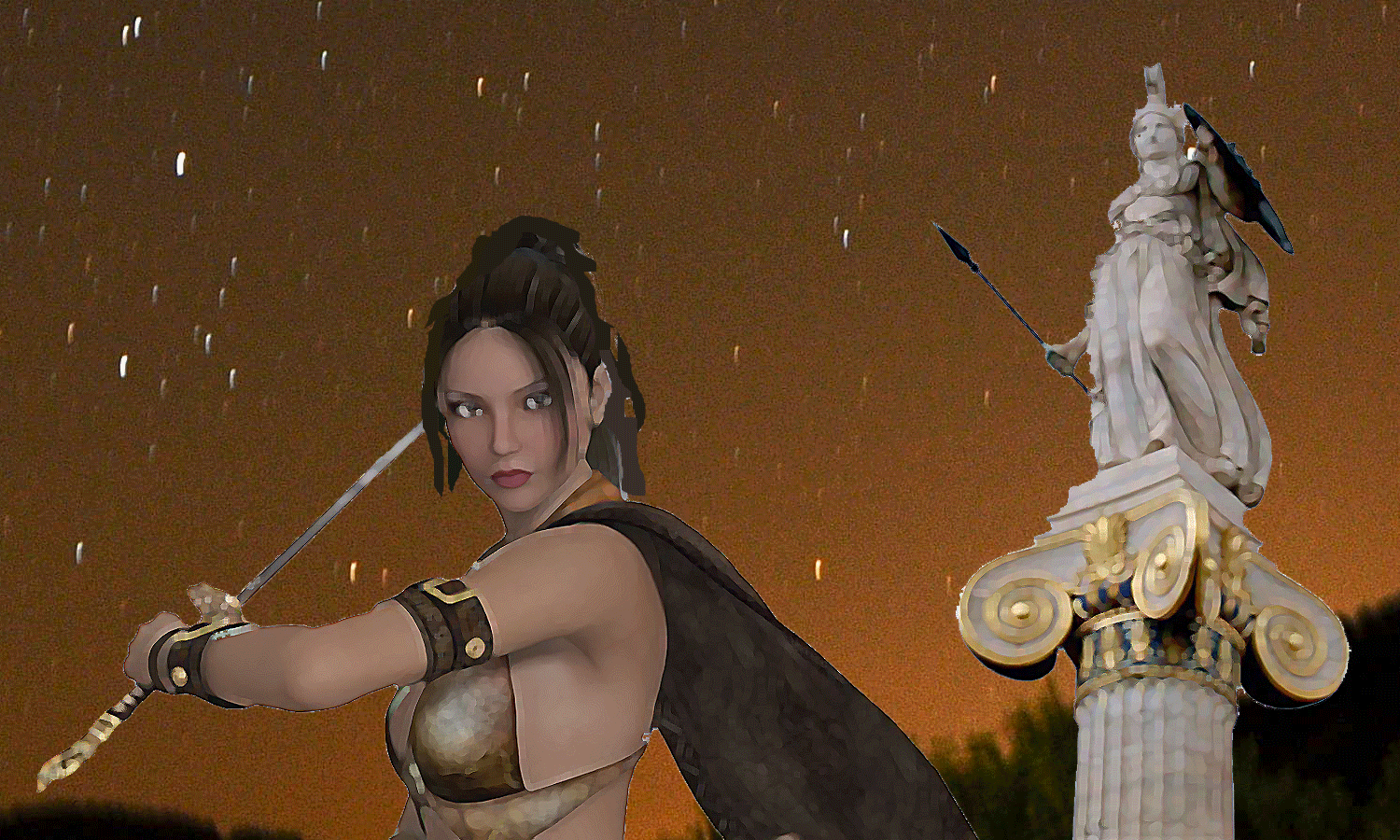 Good for us, otherwise it would have been a bad start. Thank you Mother Athena, you tender heart rebel.

And if God really existed – as said Bakhounine, this vitamin comrade – we should get rid of him. (Léo Ferré)

Mind! Athena is not only the mother of human kind. It is not only the good fairy who has considered the birthplace of our species. The legend tells us that she came out fully armed from the head of the God of gods. Athena is a funny girl, a knight, a lightning war.

It is the origin of our species with weapons in hand. Athena is a warrior, a matriarch, a chief, an admiral, a great strategist who takes his foot in and with things of war. Athena is the queen of the Amazons, she leads an iron hand an army of seasoned women and emotionless. 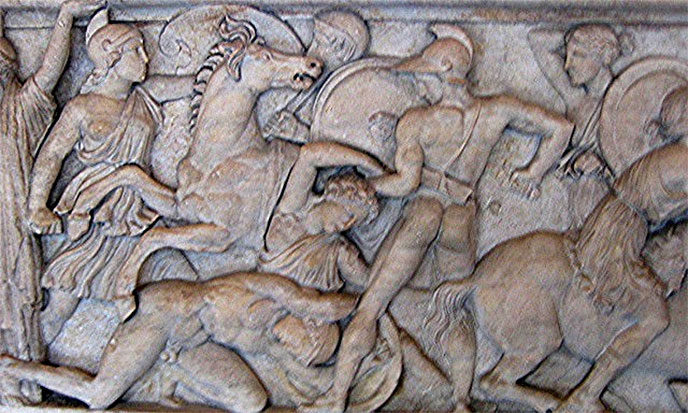 Historians argue over the location of the Amazons, hesitating to place these people in Central Europe or Africa. The matter is not on the location, but on the design. Amazons are not a people but a global army. Regardless of their origin, which was multiple anyway. Don’t look for the place they lived, look for the time they lived.