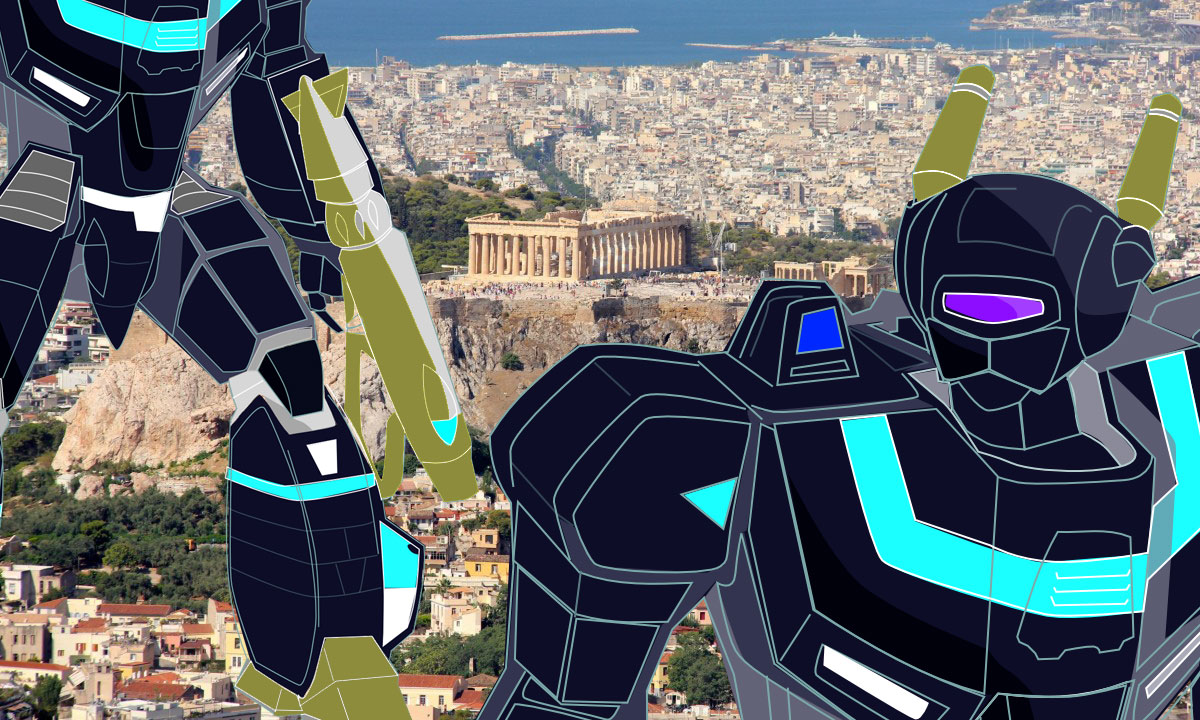 Many times I came back on one of the main scams that the Western education distils in the dear blondeor not! heads  of our children. No, we are not born in Greece. No, the Greeks are not the inventors of Western civilization. The truth is that they had access to much older knowledge, which they exploited as they could. Badly, most often …

The researcher Ludmilla Zahno sent me this info which is my delight of the day. This is a book by American researcher and folklorist Adrienne Mayor. She marveled that the Greeks would have predicted heaps of modern inventions, oh little geniuses, oh how clever they are! Just have a look:

Ancient Greeks not only created the foundations of modern civilization but they also predicted future technological innovations, according to a new book. Stanford University historian Dr Adrienne Mayor, in the upcoming “Gods and Robots” argues that Greek myth prefigured artificial intelligence, robots, driverless cars, and other modern technologies.

Dr Mayor’s arguments revolve to a large extent around Hephaestus, the Greek god of craftsmen and metalworking. One of his creations was Talos, a giant automaton made of bronze, who Mayor describes as a “bronze killer-robot” and an early precursor to the kinds of androids now being built by Boston Dynamics. Another of his creations was Pandora, a “replicant” and “wicked AI fembot” who, according to Mayor, was ‘programmed’ to release evil into the world.

Pandora wasn’t the only ‘AI’ Hephaestus constructed, since he also built mechanical Golden Maidens to help him with his work. These were designed to predict his needs and to act on them without direct instruction, something which Dr Mayor believes makes them early versions of such AI-powered personal assistants as Amazon’s Alexa.

And neither were these creations the only ancient Greek prophecies of future tech. According to Dr Mayor, Homer’s epic poetry foretells the arrival of driverless cars and transportation. In The Odyssey, Odysseus sails back to Ithaca on pilot-less Phaeacian ships, while in The Illiad Homer writes about autonomous wheeled tripods that transport ambrosia. (source)greece.greekreporter.com

Those who have been reading me for some time are already laughing. The others will soon imitate them. It is obviously not about prophecies !! This folklorist should not have read, and that’s a pity, the incendiary articles I devoted to the subject: Plato and the cave, Plato and the logos, Plato and the intelligibles, Pythagoras and his Theorem, Pythagoras and his teacher, Homer the forger and others I recommend to you warmly. We have based our culture and our knowledge on the ignorance and naivety of the Greeks, certainly less enlightened than their contemporaries Celts or Egyptians, by whom the wealthy Greeks sent their children to study and make future elites. Ignorance of our true past is incumbent upon the Greeks, who did not transmit it as they knew it, but disguised it in a curious way under the wrappings of the mind and the ego – made since grow and beautify. Volant nolent, Latin phrase meaning: voluntarily or not the Greeks who have occupied all the screen of the Western cultural past, while they were the dunces. The Celts and Egyptians spoke sacred languages, not written for the Celts, written in code for the Egyptians, which confused our etymologists and blurred the memory of the past. The fault lies not with the Greeks, but with the priests and teachers who have brought them to the skies.

While Pythagoras pretended to invent the famous theorem, there were still in the Celtic Country or in Egypt initiates who knew everything I told you in these pages. It is found at any time. But the Greeks spoke above. They wrote a lot. They were believed on their word. Neither the Celts nor the Egyptians loved poetry or elocution contests in Greek fashion. Their ceremonies were initiatory. They did not train intellectuals, but enlightened, seers, magi, authentic discoverers. We have forgotten them, it is the law of Kali Yuga. 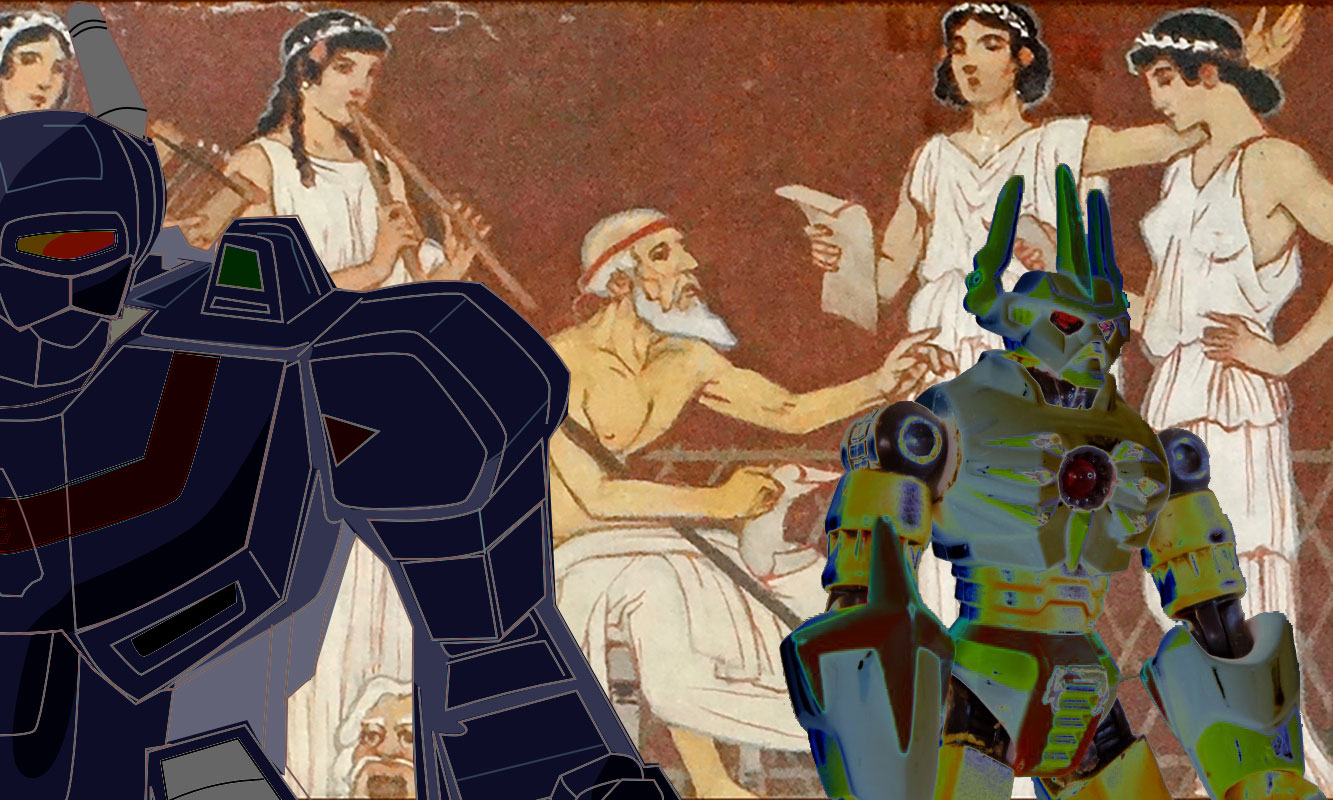 The truth is that the Greeks had access to texts now missing in the (voluntary) fire of the Alexandria Library and in many other autodafés which reduced to that all the more ancient sources . This is why archaeologists will always find evidence of so-called Greek inventions much earlier: they existed long before an unscrupulous Greek scholar attributed them. The truth is that all the knowledge was given to us by the ancient astronauts, the gods before, the visitors of the stars who terraformed this planet and made this humanity, ours, the fifth of its kind.

Suddenly, when Dr. Mayor marvels at the gifts of prescience of ancient Greeks, I feel that it is paying our head. Or his? “The ancient Greeks created the foundations of modern civilization,” she wrote. She is mistaken, I have shown in the articles cited in connection. The foundations of all civilizations and all planetary cultures have a unique source, much older than Greece, than the Celts, than Egypt, Sumer, China, and so on. This source is a Deus ex machina, a god in the machine, a ghost in mechanics, a magic wand without which our distant ancestors would have continued to eat bananas all naked on the beach. What they would have done better, probably …

All these brilliant inventions that the Greeks have pretended to imagine, no doubt, they are very real. Supersonic planes have crisscrossed the skies of all the continents long before the foolish tests of Daedalus and Icarus. Flying machines and war machines roamed the battlefields long before Leonardo da Vinci drew them. Some of these machines crashed, which is good because they are sowing technological nano-objects. Evidence of what I say is so rare … or so-called!

We did not invent anything, not even today. We are content to let our unconscious dig into the Akashic annals the inventions of the past that our world has forgotten. The first who finds something new is the inventor, but who can pretend to invent something new in a world so old that vertigo seizes us? So think, the first traces of technology are nuclear, they are billions of years old !! China amuses me with its 5000 years of history, really! Not enough to flirt or throw firecrackers. The astronauts who shaped this world and created the human being belong to a civilization so ancient that we have no chance of catching them. 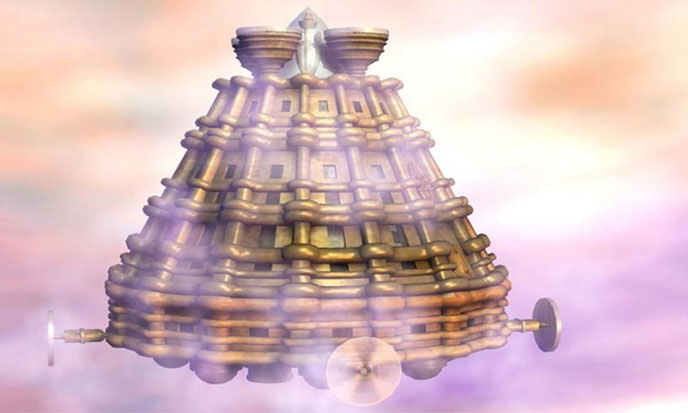 “Neither an archaeologist nor a paleontologist herself, Adrienne Mayor has nonetheless done some digging deep into the past and found literary and artistic clues — and not a few huge fossils — that seem to explain the inspiration for many of the giants, monsters and other strange creatures in the mythology of antiquity.

‘‘I have discovered that if you take all the places of Greek myths, those specific locales turn out to be abundant fossil sites,” Ms. Mayor, a classical folklorist and independent scholar, said in an interview. ‘‘But there is also a lot of natural knowledge embedded in those myths, showing that Greek perceptions about fossils were pretty amazing for prescientific people.”

The Homeric legend of Heracles rescuing Hesione by slaying the Monster of Troy, for example, may have a paleontological origin. Ms. Mayor pointed out that in the earliest known illustration of the Heracles legend, painted on a Corinthian vase, the monster’s skull closely matched that of an extinct giraffe. Such fossils are plentiful on the Greek islands and western coast of Turkey and are mentioned in classical literature. The vase painting from the sixth century B.C., Ms. Mayor concluded, is most likely ”the earliest artistic record of a vertebrate fossil discovery.”

”Just as a fossil is ‘petrified time,’ so is an ancient artifact or text,” she wrote. ”The tasks of paleontologists and classical historians and archaeologists are remarkably similar — to excavate, decipher and bring to life the tantalizing remnants of a time we will never see.” As Ms. Mayor said, the first myth showed that the perceptive ancients were able to relate a fossil species to living animals, well before modern paleontology.”

Mayor neglects another hypothesis, less flattering to the Greek genius. At the time when this vase was painted, who tells us that other representations of this giraffe, much older, did not exist? Of course, we did not find them, but we found very little artifact of Greco-Latin antiquity. (source)

In my opinion, she is mistaken in her conclusions because she remains a – real or simulated – prisoner of the dominant paradigm that there was no civilization developed in our distant past. Still less civilization more developed than ours. And even less a civilization of giants from distant stars. For the dominant model, it’s science fiction.

Well, I say that science fiction is right, that Heroic Fantasy is much less delusional than the paleontological rantings on CroMagnon’s man and his zebu skin breeches. Scientists have many lessons to learn from poets and artists, who are by definition greater visionaries. Moreover, when a scientist shows imagination, even the ignorant revere him, as was the case during his lifetime for Albert Einstein, and long after his death for Nikola Tesla.

To go further than Mayor, fortunately, there is Eden Saga. I would have given a lot to know a site like this, take my word.