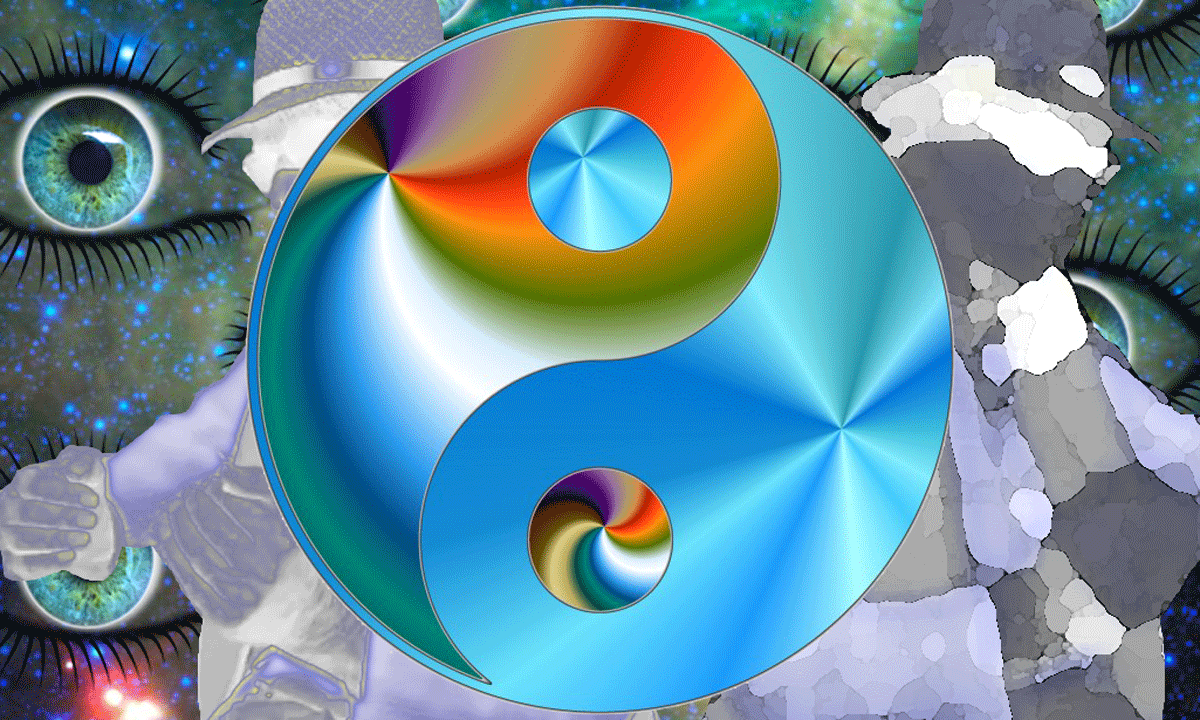 Of all Chinese philosophy, it is probably the principle of yin and yang that is most familiar to the Western mind. (source) I have expressed serious doubts about its true original meaning, now I want to reconsider the question in the light of the usual spiritualist explanations.

This is what you can read everywhere. What grieves me, if only through the examples given, is the image of women. The man, of course, is positive and clear, while the woman is dark and negative. Gross. But instructive.

I deduce from this that this interpretation is not in accordance with the original message. This sign dates from the very beginning of this humanity, in full matriarchy. I doubt that the sectarians of the Great Goddess could have expressed a negative opinion on the Woman, who was then in charge of the world, the high patroness of the gods and humans.

The yin yang is much older than its usual interpretation. It expresses a female disdain which illustrates the patriarchal reaction against the late dominant matriarchy. After the planetary reign of Rama the conciliator, the new dominant males wanted to degrade the memory of the glorious dominant females.

For them it was a question of rehabilitating the male in his preeminence, after the very long period of matriarchy. Forty, fifty, sixty thousand years? More? Women have ruled over men for so long that they continue to do so on the sly. 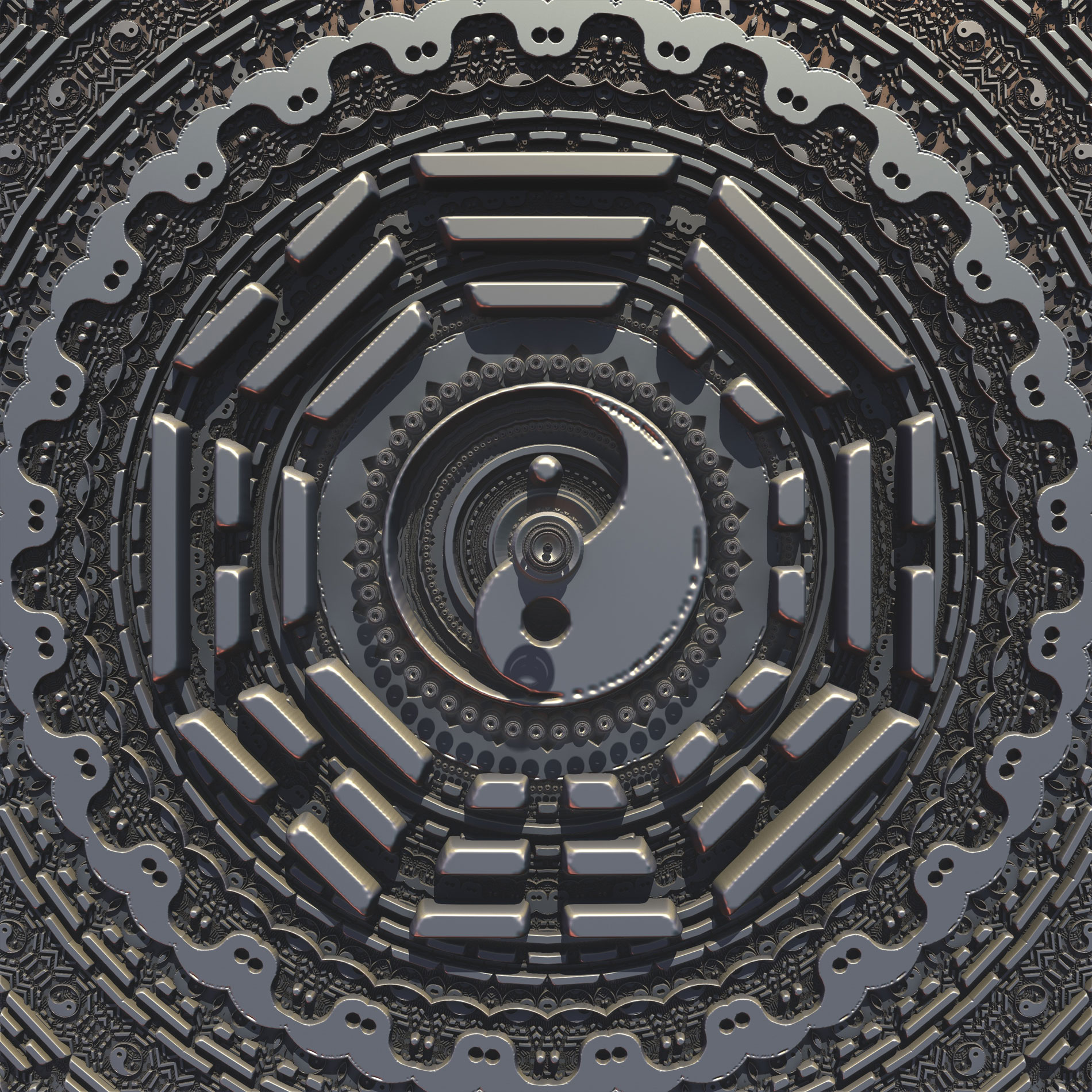 In the written Chinese language, all words can be broken down according to their elements. It is interesting to see how the analysis of these lexical elements can only lead to symbolism. True cream pie of above ground spirituality and religions of the head. Just type Tao on Goodgal and find this:

“The ideogram of the word Tao represents movement, step joined with a head – the leader – the sovereign, from which emerges the idea of “a chief leading the march “, which will lead to that of “conduct of the march “, then to “way to be followed that traces the chief “, which in turn will become” principle which directs “, and” conduct to follow “(so that everything is in harmony). The term Tao has been translated by the “Way”. It also expresses the idea of ​​creative and evolutionary movement, of advancing towards, of traversing.” (source)

Let’s try to clear up this gibberish. The Tao ideogram represents movement, walking forward. It is attached to a head, a “chief, leader” in the symbolist interpretation. Very well. But we can interpret it differently. The Tao ideogram, like the yin-yang symbol, are both linked to movement, to walking forward. Idea of ​​progress, progression, progress.

But also the chef’s idea. The Tao hexagram encourages us to follow the example of our leaders : the ancient people who has been our instructors. Act like these former gods did, when they terraformed our planet. Act in accordance with their example. These former gods had motor vehicles and planes : here is the plan. Let’s follow their example, let’s do what they did, let’s build these unmoved engines.

For me, yin-yang expresses the idea of ​​a spinning wheel, driven by its own weight. This symbol has something physical, and this physical aspect appeals to me much more than its pretended metaphysical aspect. The Tao wheel immediately evokes the tarot wheel, since the inversion of the Tarot syllables gives Rota, wheel in Latin.

The previous image is a very old representation of yin yang. We see around him the wheel of the hexagrams of the Yi King, completes it, and not reduced to four hexagrams as it appears on the Korean flag. 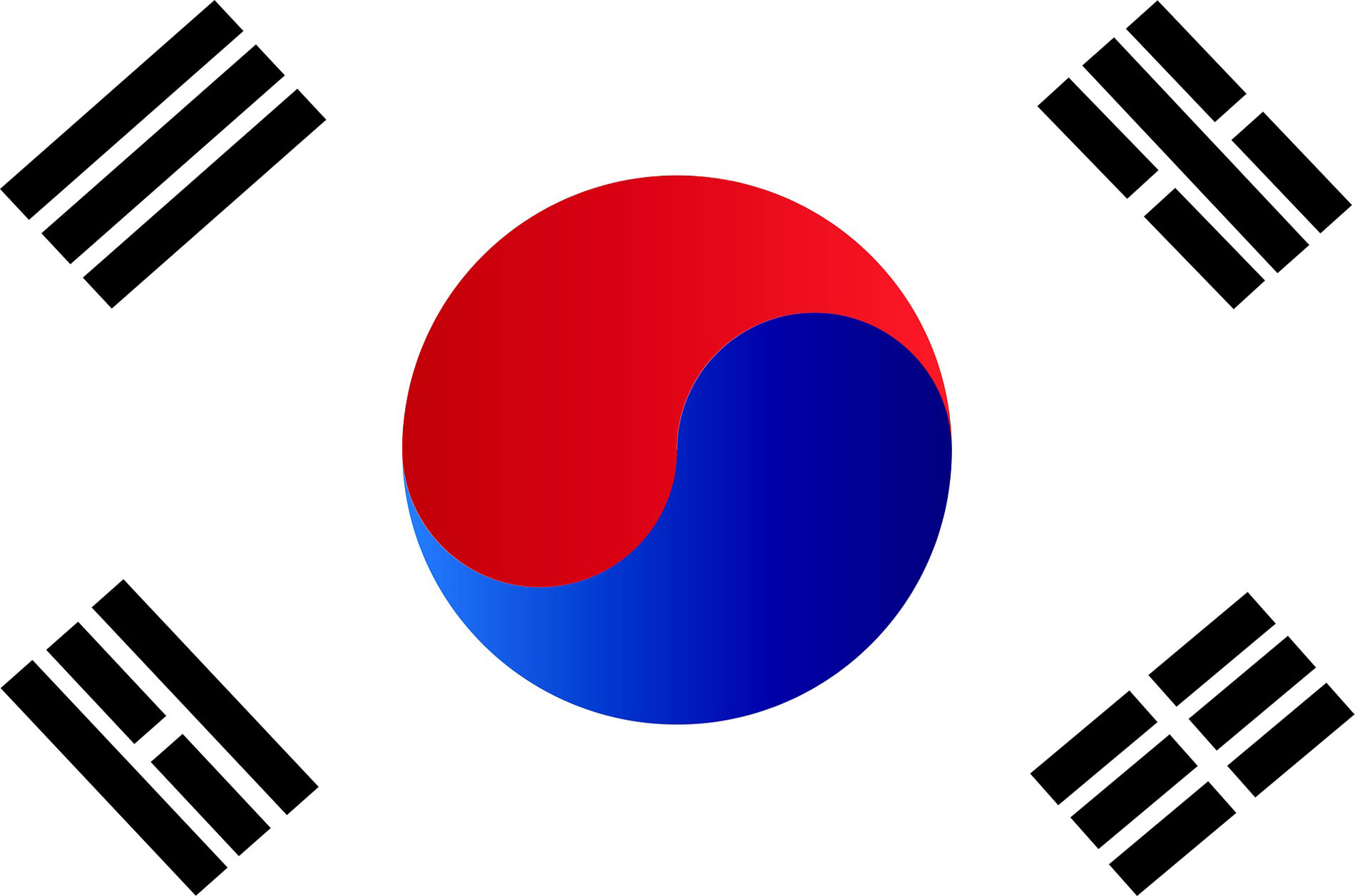 Another oddity in this flag is the lack of dots. These points are of capital importance. If they are not on this flag, there must be a reason – or could it be stupidity and ignorance of this end of kali yuga? 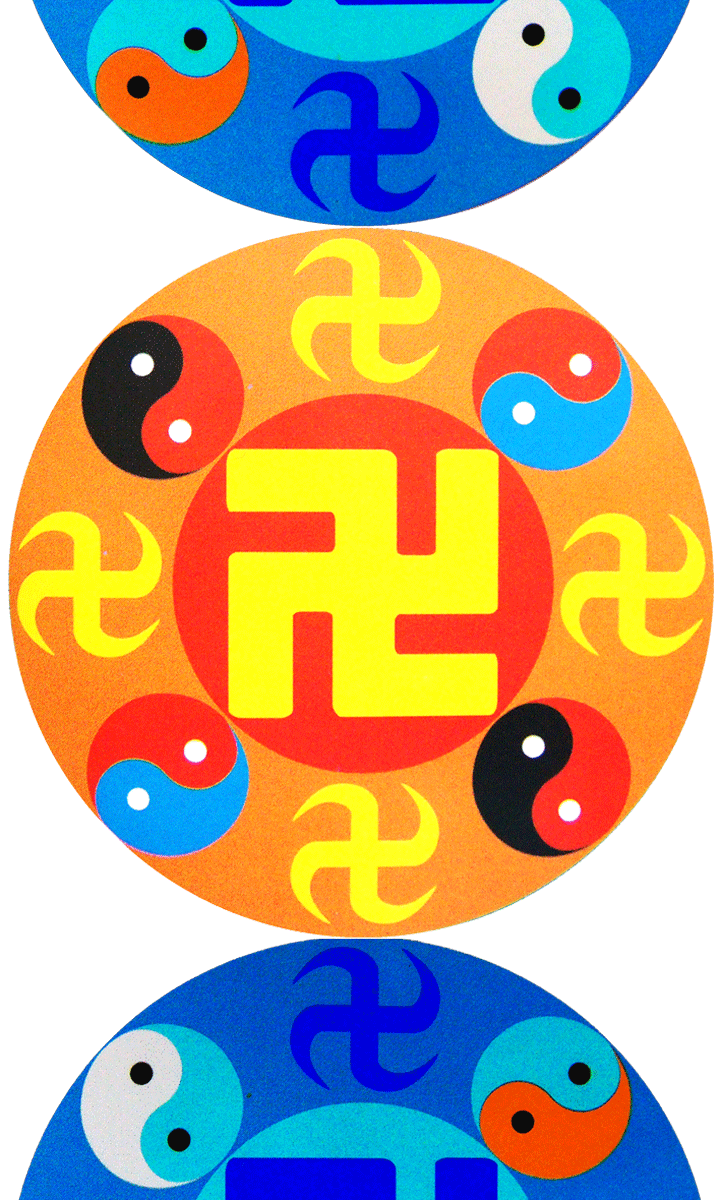 Detail of symbolism? Come on! There is no detail. These points have nothing to do with symbolism. I hate this word and the absurd practice it designates. Never has a symbol fed the hungry or helped anyone to see more clearly. No symbol explains anything. All symbols add unnecessary mental complexity to our representation of the world.

Let’s take the image of the spinning wheel, just like the Celtic triskell or the Hindu swastika. The yin-yang exposes the functioning of an Atlantean, multi-metallic, vibratory engine, triggered by a precise sound. I explained it in the article entitled The true meaning of Tao.

The yin-yang sign shows in two dimensions what to understand in relief. In a metallic sphere are intertwined four metals in the form described by yin yang.

Points play a key role. Without them, the magnetic interaction between these metals would not exist.

The points are both a brake and a motor in the motor. A regulatory factor. The electromagnetic energy produced by the metallic masses yin and yang is continuous. The presence of different points would then be the way to modulate this energy. Speed ​​up or slow down the engine. Keep this point in mind as you read this:

Yin and yang are the inseparable modes of passivity and activity that continually arouse one another. They are the poles of the primordial creative force which, through them, acts everywhere in the manifested universe, causing its incessant changes. (source)

Was it written to support my thesis? Passivity and activity are the braking and acceleration of the engine, the primordial creative force is quite simply the electromagnetic force at work in the opposing metals. 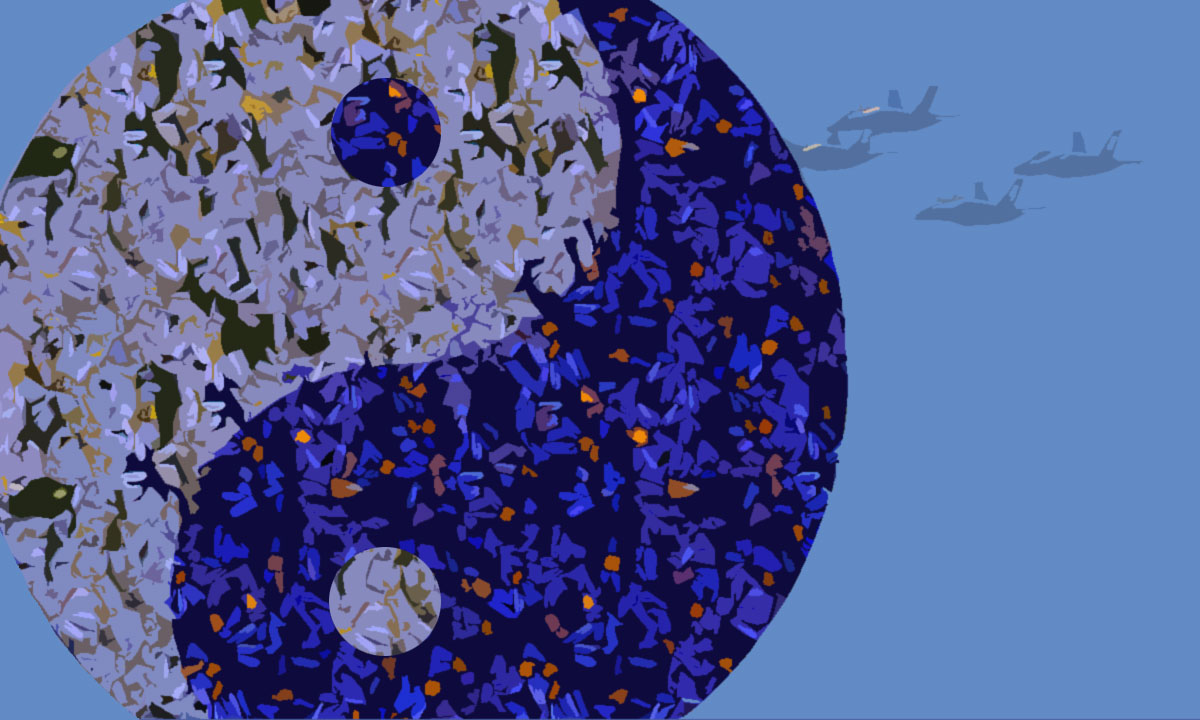 And it gives nonsense like confusing a sage with a motor. The Taoist sage is the perfect example of the balance of power yin and yang. “Motionless, he communicates in yin mode, acting he communicates in yang mode. In him spirit and heart, intellect and feelings, intelligence and instincts are balanced. Being neither negative nor positive, it stands in the invariable middle, the central axis.” (source)

I first thought that this plurimetallic ball contained four antagonistic metals, as I explained in The true meaning of Tao. I now wonder if two metals were not enough, provided you include the inverted points, as the symbol shows.

On the other hand, can this strange intertwined form be transcribed in volume? My knowledge of geometry does not allow me to judge. But it could make a good geometry exercise for competent people.

If a skilled reader can make a 3D model of this polymetallic interlacing, I am interested, of course. And I can reproduce it right here. 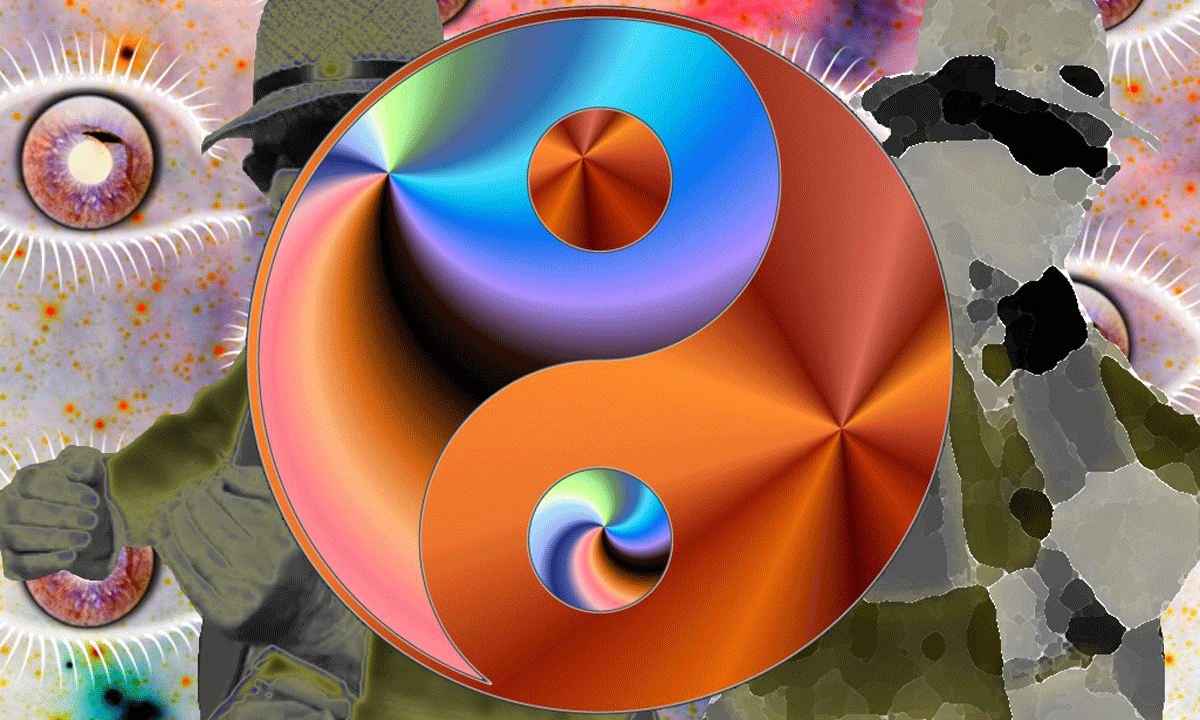