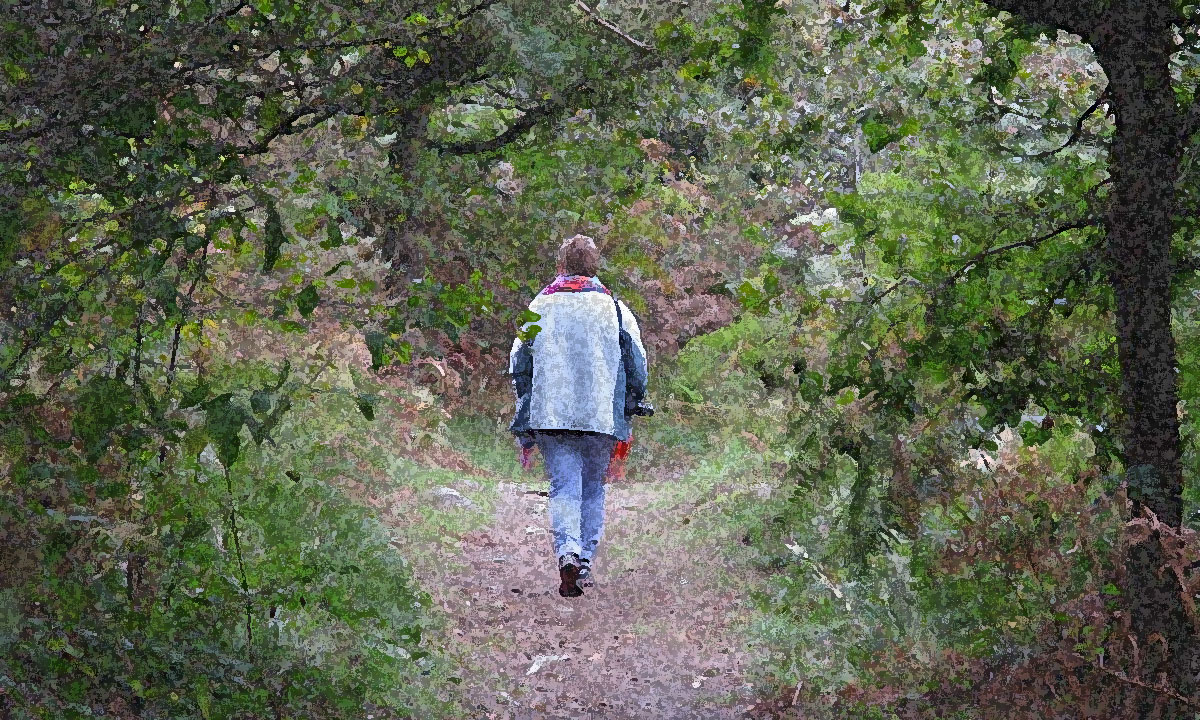 It used to be called Guihalon Grand-Pierre,Big rock a large stone that BretonnantsBreton language supporters hastened to translate Men Goz,Big rock forgetting that around here no one has ever spoken Breton. I live in Gallo country and I am proud of this beautiful language. Some would say Gallo is a dialect. I don’t.Do I? But I am even more proud of this prince of menhirs.

The name of Guihalon or Guihallon is hardly explained. A local old man says it means Sitting Ogre. He did not specify in which language, as far as he knew. Sitting Ogre! I like it. Kind of Sitting Bull, the fierce chief of the Lakota, quite the opposite of a cool fellow. Guihalon would carry the nickname of a inconvenient? Which surprised me … only halfway.

It is inconvenient, it hardly is, this peaceful giant. Except for its size, it is not an ogre, on the contrary. While the ogre devours, Guihalon feeds you with good vibes. They can be felt kilometers away, up to my garden, if sitting on the buried dolmen.

Good vibes, moreover, not always. My friend Devic, who made the dirty joke of leaving before me, was less pampered. The charm of the place did not deceive him. Behind this apparent bonhommie of the decoration and the monument he felt something more powerful, a freezing blackness.

On several occasions indeed we have felt the peaceful energy of this pretty undergrowth morph into pure terror. We decamped without asking for our rest. Devic encouraged me to position the car in the parking lot so that I could leave directly, without maneuvering. Speed ​​is an asset in this kind of circumstance.

I respected this ritual scrupulously until last February, for the Eighth Meetings.French speakers only, sorry And the light illuminated me. These sudden changes of mood, the rapid transformation of the megalith from benevolence to black anger, only happened when Devic accompanied me. Grand-Pierre is not responsible …

The case is clear. My friend always insisted on the position of the car. From the parking lot, he was starting to build up pressure. And I swallowed it! My dear Devic! 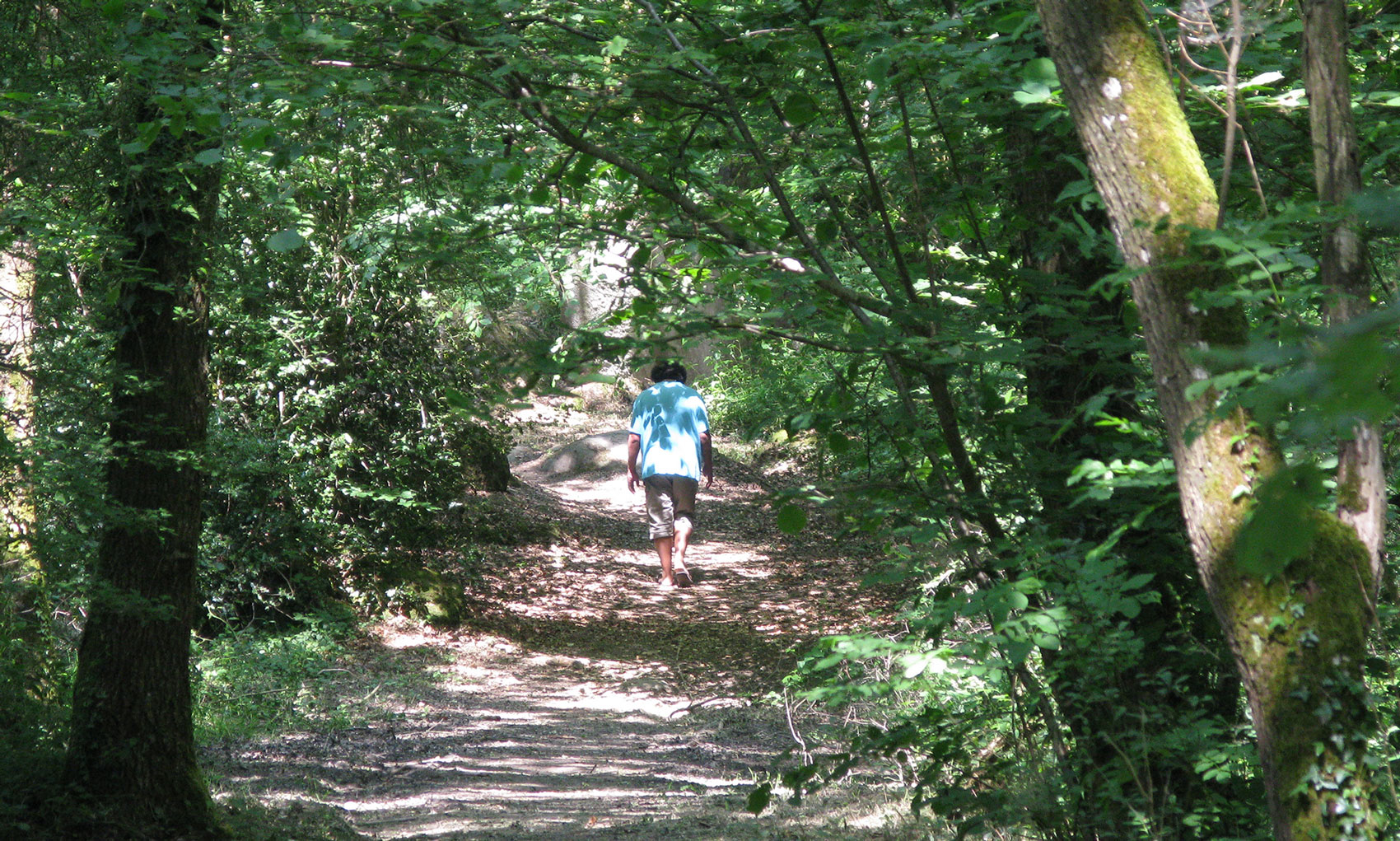 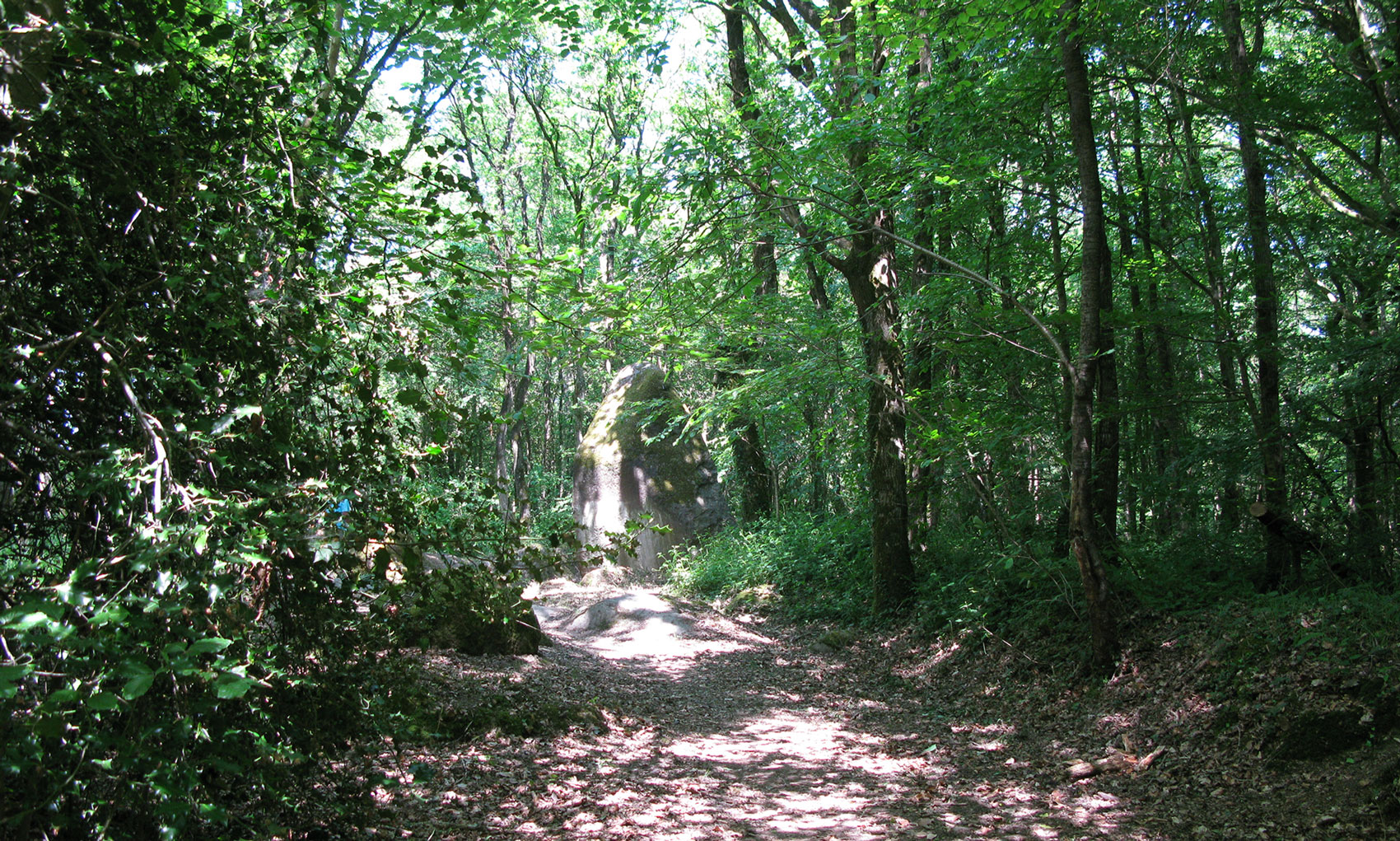 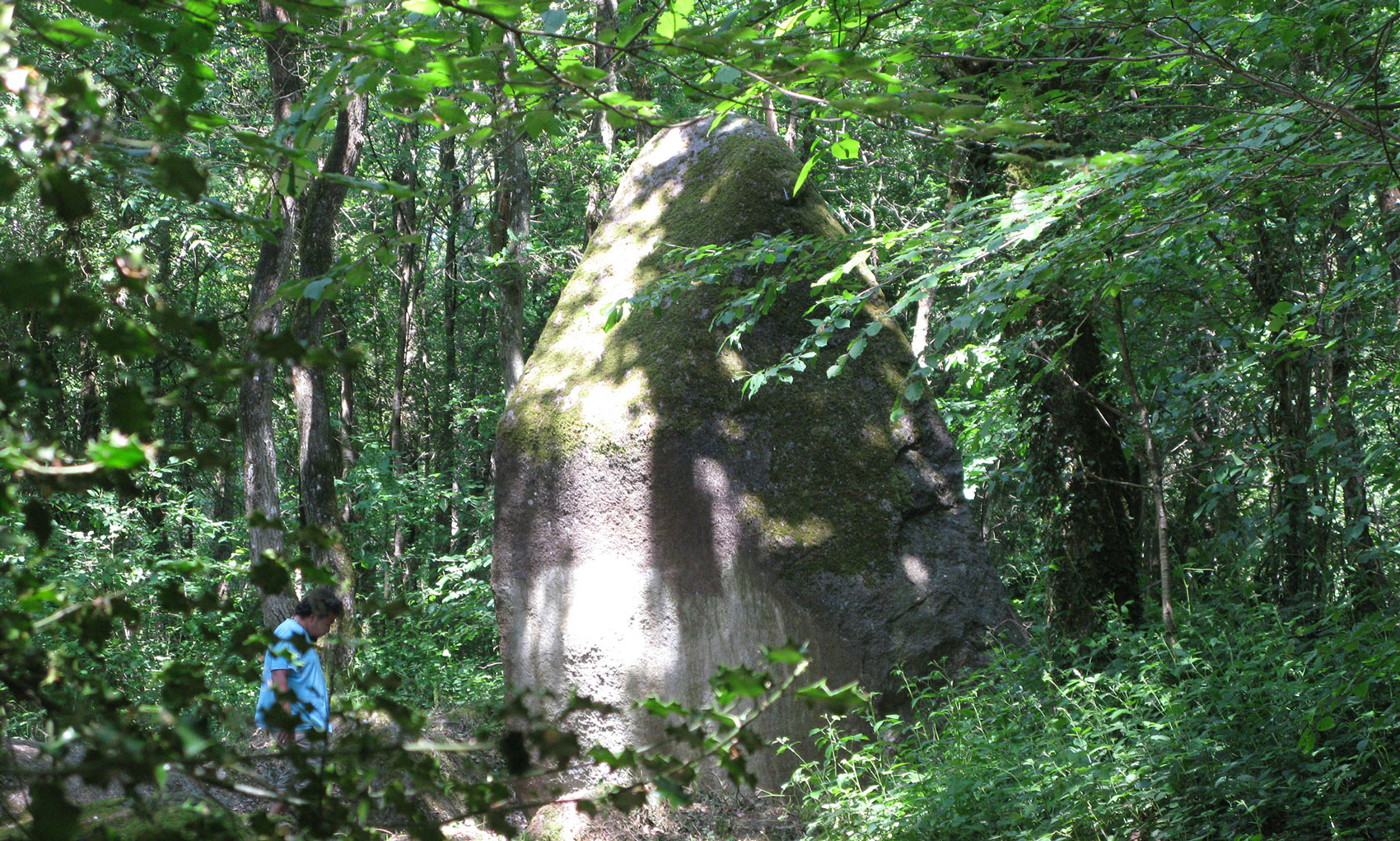 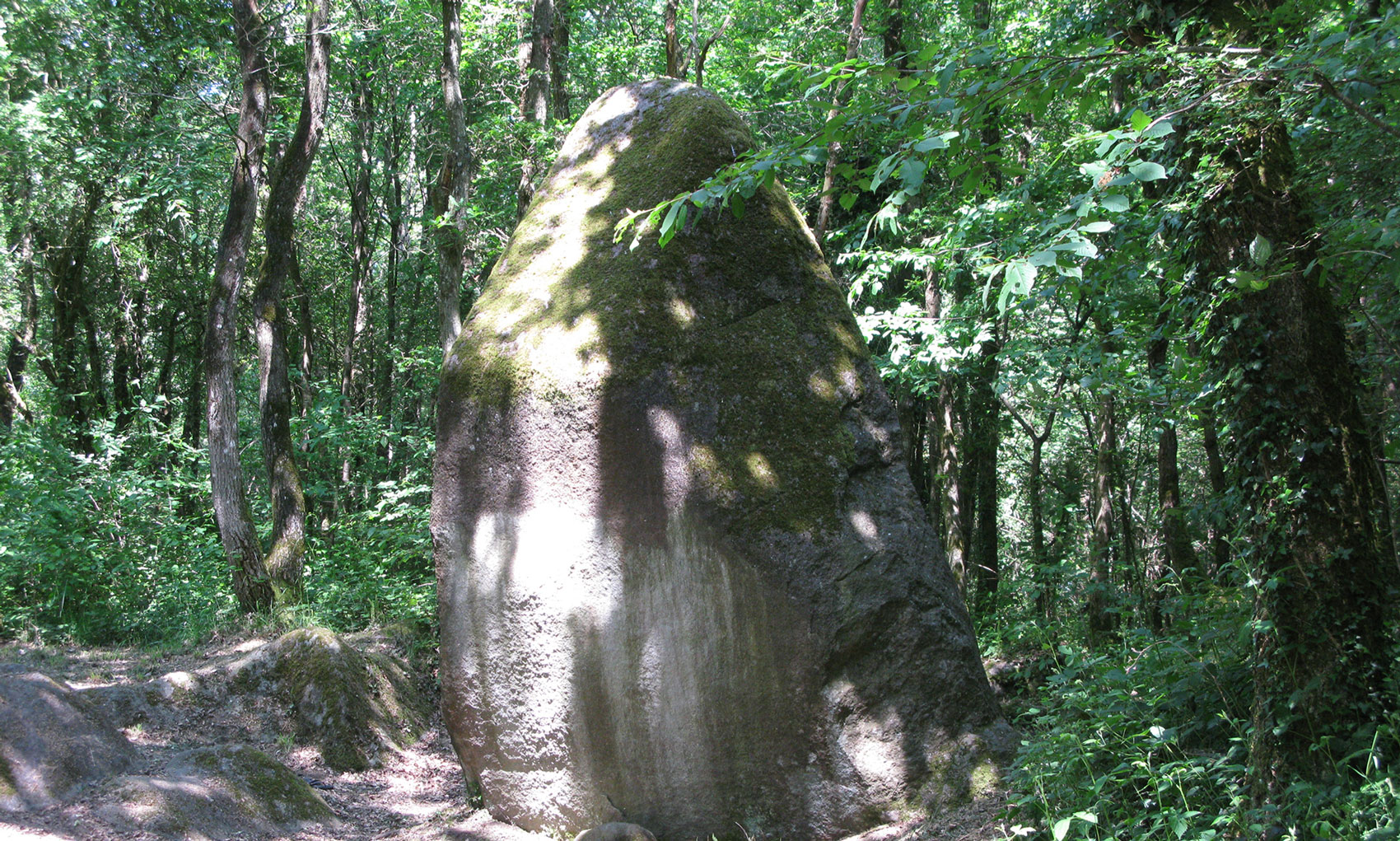 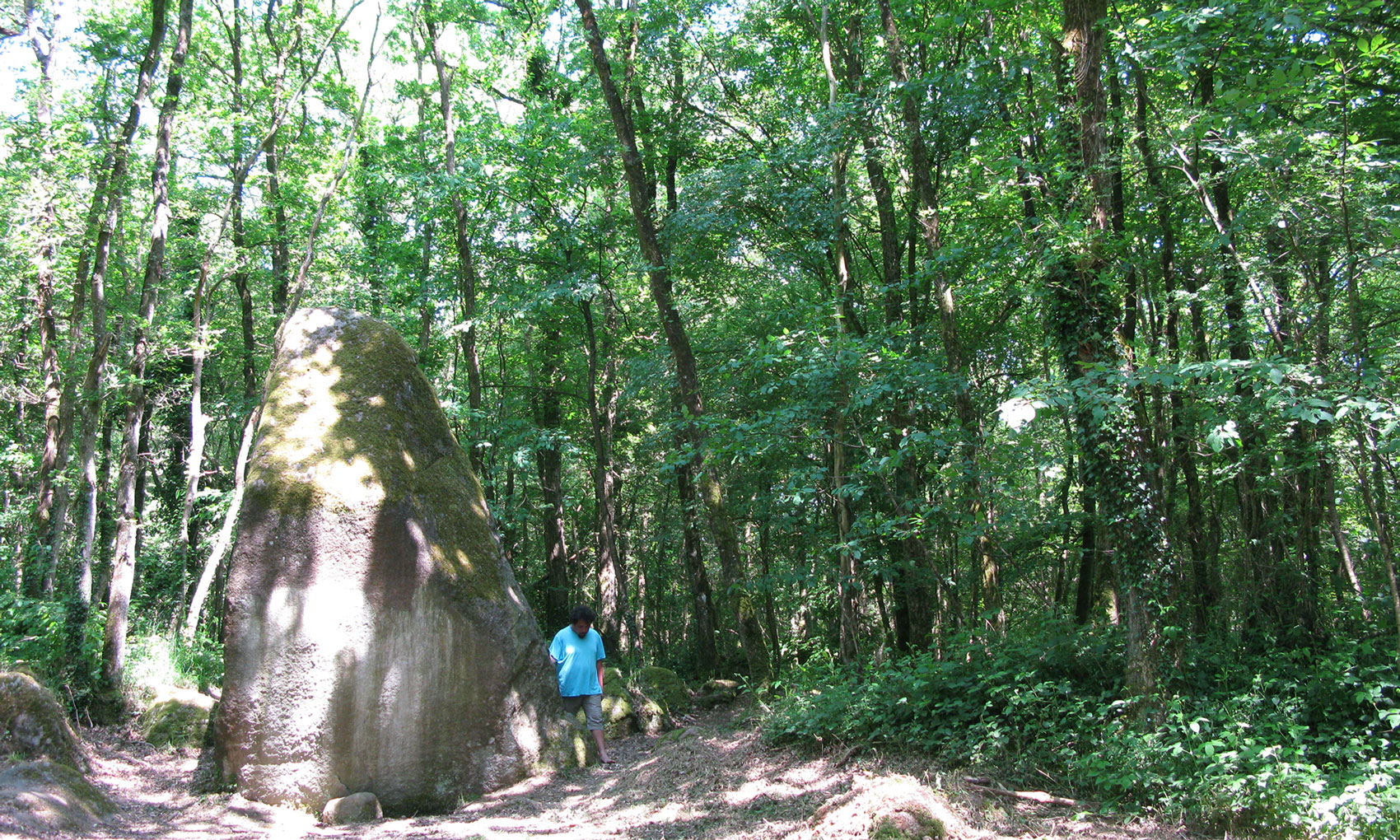 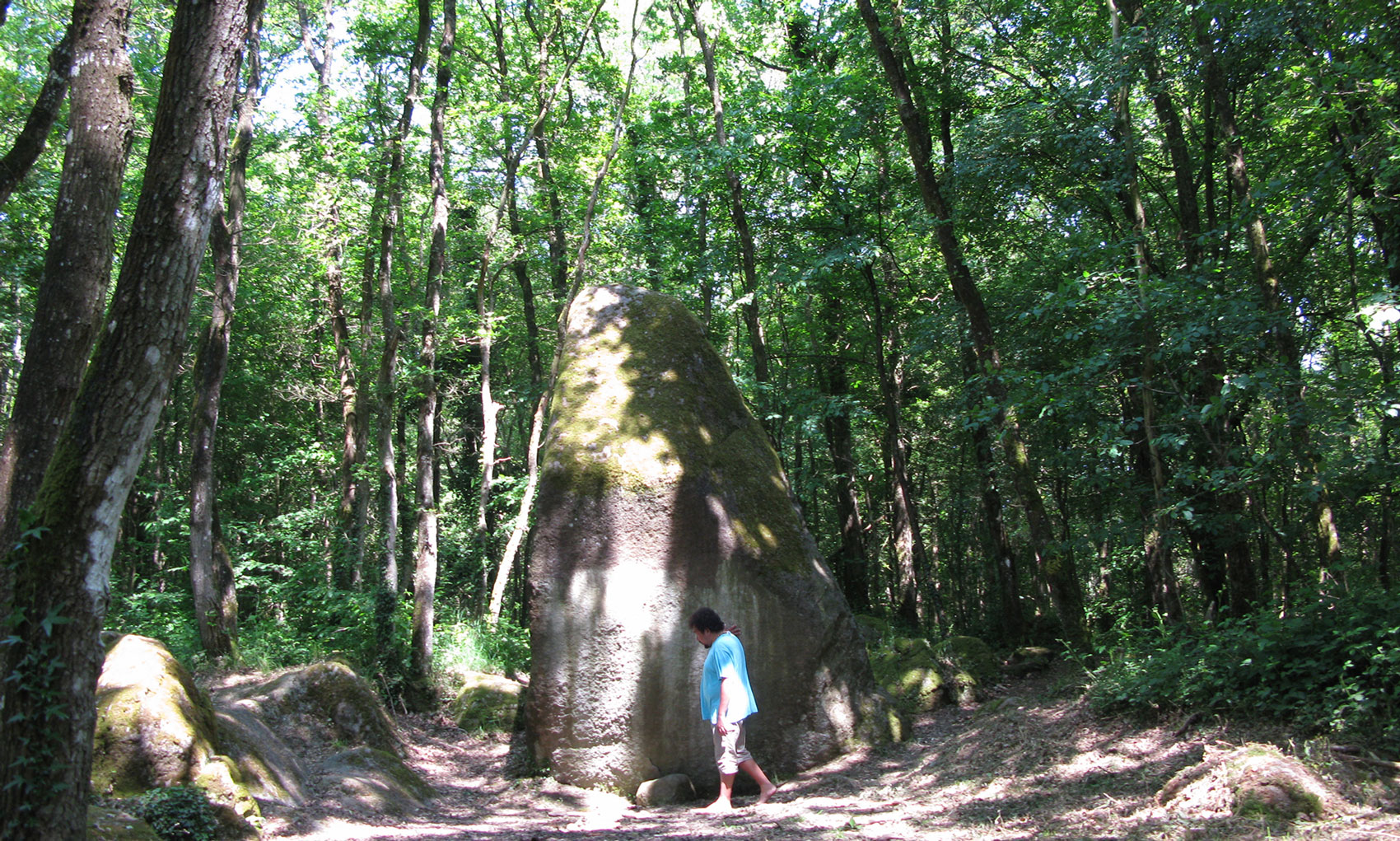 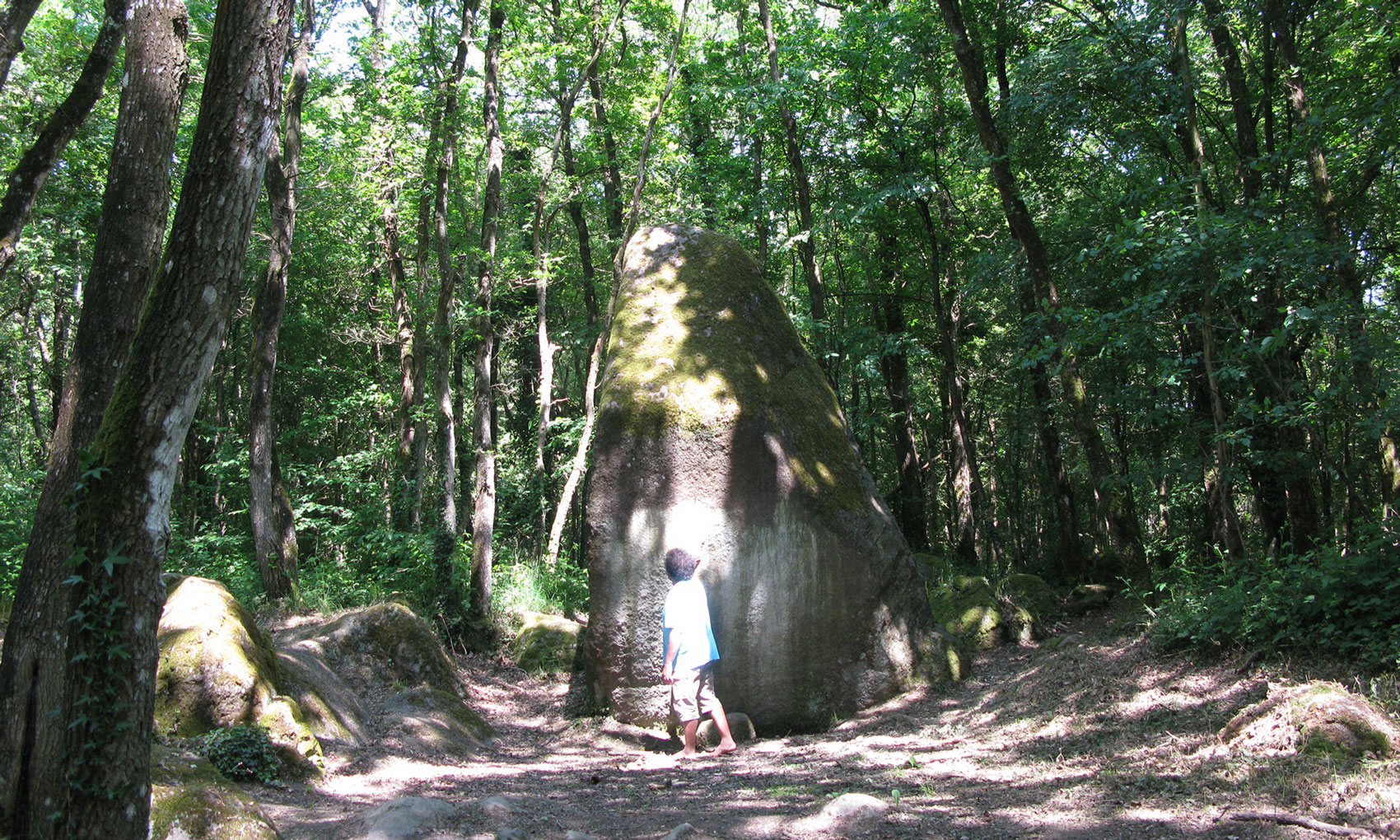 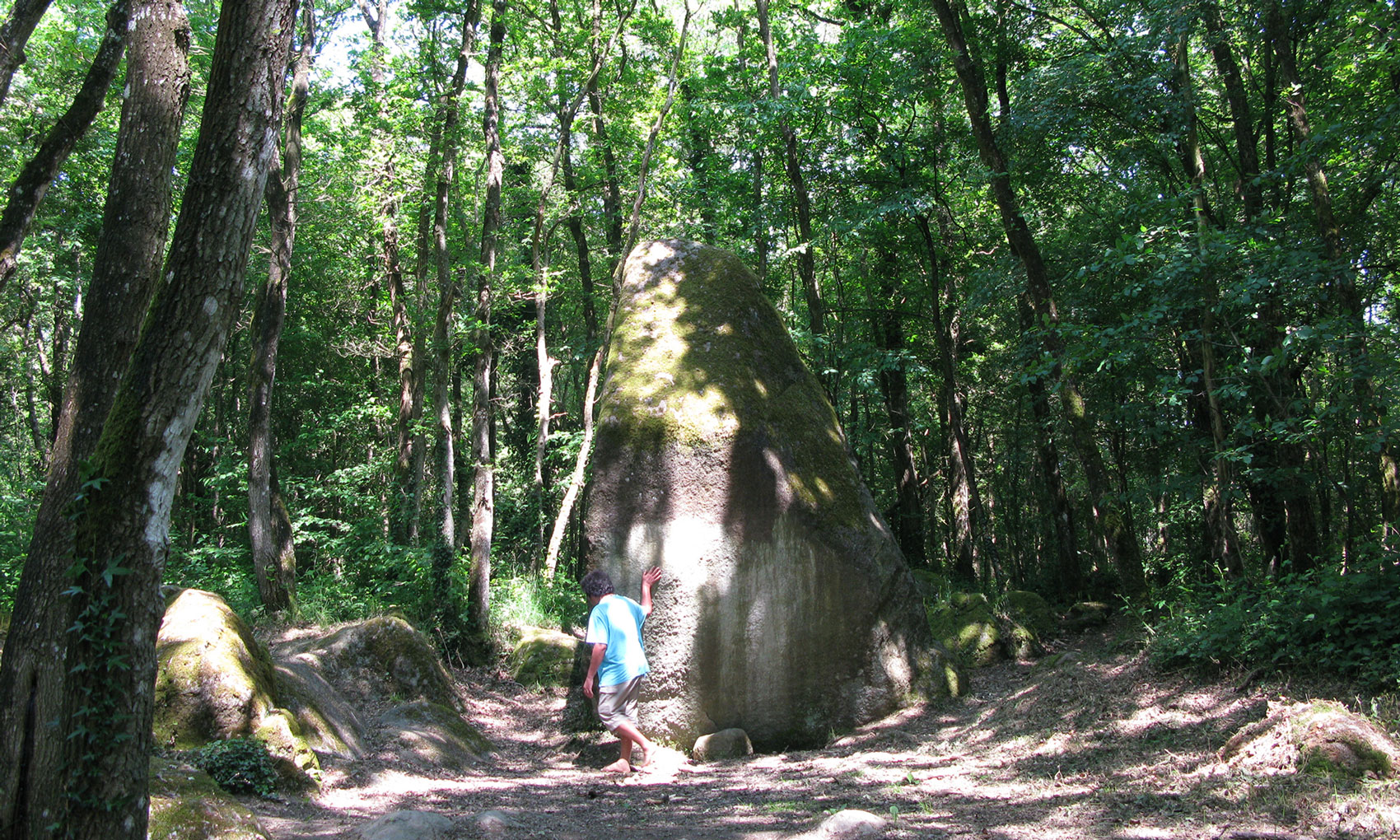 La Grand-Pierre is my friend. For what I could feel, it works as an energy amplifier. Scalar waves, for example, are amplified by Guihallon in a significant proportion and over a large perimeter: the subtle vibration of the Great Stone is perceptible in my garden in Erquy, 15 km away. It covers a radius of 30 km.

Its activity is quite impressive, both in quantity and in quality. I used it as a scalar amplifier to send healing waves. A terminally ill patient. His feelings were immediate. A feeling of lightness that he had not known since the beginning of his long suffering. From then on he knew he was cured, he laughed crying, he couldn’t get over it. As he was a believer, I told him to thank the Almighty who works wonders.

Today I am no longer healer. People can heal themselves. Those who wish can come and see me for a brief stay in my magic garden. A very short stay is enough to change everything. To wake up to the first morning of the world, ready to start a new life, who knows? It was seen. But don’t ask me to heal you. The Living One will do it. I cannot do such a thing. My place will do it for me. The Great Stone will heal you.

In its sacred grove, everything is provided for that. Not far from Guihalon, there is this guardian tree on the branch of which many pilgrims have sat. There is this healing stone whose pyramid shape owes nothing to chance – which as everyone knows does not exist.

There is no such thing as coincidence. Everything that happens is wanted. (Buddha) 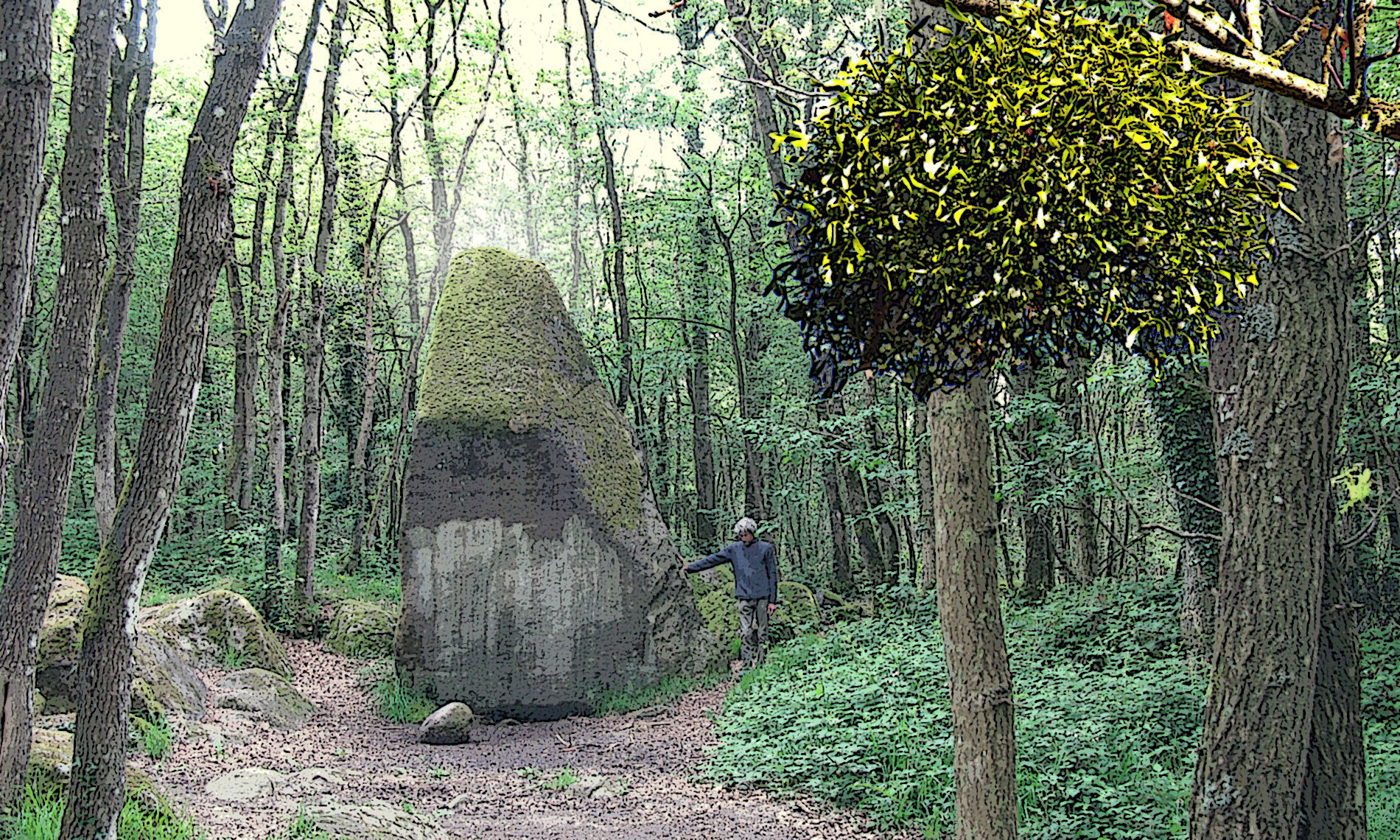 I was itching to present this sweet monster to my dearest friends. I imagined a meeting of wizards. They came from all four horizons. They came out of all my lives. Fairies and enchanters, druids and druidesses, yogi, pythies, clairvoyants and miracle workers, everyone came. Warm and friendly atmosphere, some found each other, others were happy to finally meet. A real family, my friends. These 2011 New Year celebrations were landmark. Everyone wanted action on New Year’s Eve. We went to visit Grand-Pierre.

Arriving at the edge of his sacred grove, it was pitch dark. There were ten of us. We walked in silence, the night was moonless, and all artificial lighting is prohibited. Old ban dating from Scouts. If you really want to feel the breathtaking energies of the night, all electric light becomes a curse. Especially since it can attract unwanted people …

The trail is passable day and night, a little muddy in winter, but who cares? We walk spaced about twenty meters apart. Power march. Not a sound, no unwanted whisper, not even a cracking twig. I come to wonder if I’m not alone in this dark undergrowth.

The friend Devic is there, of course. Since it could change the atmosphere in the blink of an eye, distrust and disgust! I have no desire to see him blow a wind of panic among my guests. Although such wizards do not get scared so easy. But when Devic opens the terror gate, nature starts screaming and all your hairs stand up.

As if by chance,see above we all dressed in light colors. Visible from afar. Nothing has been prepared, yet one would swear the opposite. Without a word, we placed ourselves around Grand-Pierre, settling on a point that seems to each of us the best for what we have to do. And what should we do? I don’t know. The others either. Everyone positions themselves with the utmost care. Once in the right place, everyone stands quietly. It looks like a ritual begins.

A long time stretches. The almost full moon is revealed. The ten motionless figures under the moon have a supernatural glow. Our positions seem studied – they are not! – the outfits look chosen – hey no! An astonishing silence weighs with all its weight on the beings and the place. The tension is growing. Surprise! Loud voices !!

In the distance people are approaching. In the middle of the night ? Several people come here. Without consulting each other, we act as one man. Our stillness and our silence are heavier still. My little finger whispers to me that we are going to live a funny sketch.

Extreme tension. I hear the silence. Energy becomes visible. Bright dotted lines connect us. Their race is very fast. Dream or reality ? Still silence. The intruders are nearby. They stop.

Suddenly a loud cry. Terror of intruders who run for their life to the parking lot. They thought they were interrupting a ghost sabbath or a vampire council. Unfortunate ! We laughed for hours. Every time I think about it, I am laughing.

Guihalon Grand-Pierre, my friend, always give us your winning numbers. Make us laugh heartily. I love your devastating humor. Your lovely power. Your delicate presence and your mass which is less so. Your energy which seems inexhaustible and no doubt it is. You made me live many other adventures, which I will probably tell one day. But above all you treat me at every moment of your beneficent waves, relayed by the dolmen that crowns my garden.

Every day I see my chance to live here, facing the sea, in full sun on the side of the cape, lost in the flowers and in my memories. The desirable Erquy of my childhood has become the eternal Erquy, the era that precedes this one, I live with her, my Greek queen, my port of Asterix, and I contemplate your beautiful point, citadel, gateway, every moment reminds me of the little boy to whom I have remained faithful – except for the body.