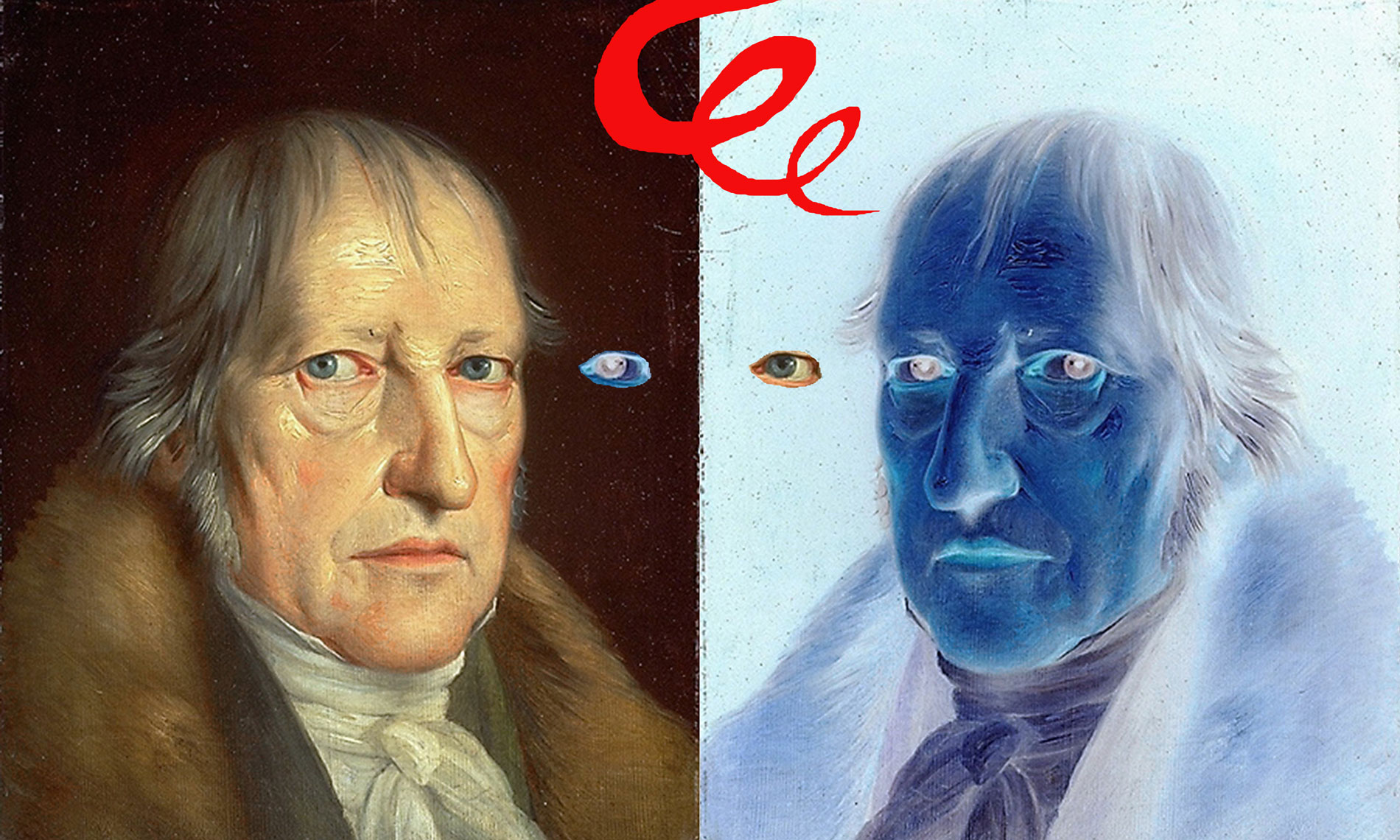 Nothingness is nothingness of what it results, wrote Hegel in a super-polar called The Phenomenology of the Mind, which presents a simple vision of life. Simple provided you like five-star mind games and Chinese puzzles. Or German. And the hermetic sentences …

Nothingness is nothingness of what it results. Well, Hegel means that there is no absolute nothingness, that all nothingness is relative. Nothingness depends on the previous state. There is no mountain without a valley. But Hegel implies that nothingness has a cause. Nothingness itself cannot be the cause of anything, das ist unmöglich. Hegel’s head was so full and so insane that he forgot to live. Like German language and Wagner’s music, German philosophy is powerful, sonorous, and devoid of grace … excepted Nietzsche’s. Most German philosophers have neglected the essential: the unbearable lightness of being, devotion to the superfluous, the thousand and one states of dead or living matter. They lost sight of the Spirit. Running after the intellect, it bums into a wall. So did Hegel.

And yet his sibylline sentence gave me the mad desire to reread the old Meister. Philosophy goes back years after, like LSD. Hallucinating as well. It gives gorgeous visions, panoramic scenery, the world unfolds, everything gets clear, the harmony is installed and then the eraser passes on the board, it is the descent, highway to hell, you do not understand anything, you flippy. Welcome home. Go down the street and shout: Hegel!Et gueule ! means: And shout! Lost in translation

“Hegel’s dialectic walks on the head, it must be put back on its feet.” said Marx. The dialectic is not my piece of pie. Neither on the head nor on the feet. The dialectic –seen from here– is the mind that spreads to hide the Living. Wasted effort. You better make a sudoku. What I see especially in this sentence is a gratuitous negation. Absolute nothingness does not exist, exclaims Hegel in great need of comfort. Absence is the absence of something or of someone. Well-known Judaeo-Christian chorus …

We have all in us, around here, the morality of our fathers and its obsolete principles. Did they prevent the rise of fascism or the reign of intolerance? I don’t think so. On the contrary, they helped them to grow. Absolute absence seems impossible to Christians as to Jews for whom we are never alone, since God is in us, always, everywhere. God, do you say? But what god exactly? Oh, it does not matter, tenderly entwined priests and rabbis say. There is only one god, no matter what name he is given.

Well, not exactly. Some gods were hateful. Aniway they are not more gods than we are. If you talk about the Unique, I’m sorry to say it’s a myth. The Source is not a person, but a triple flow of energy, intention and love.

Now we will do something else. Here is a sentence of the same Hegel in the same book on which generations of brave apprentices have turned pale. To prevent their students from the same shit, I will translate into an honest language. “Self-awareness is certain of oneself only by the suppression of that Other who presents himself to her as an independent life: she is desire.” I am sure to exist until I come up against a stronger will than mine. This will makes the existence of the other unavoidable. Egotic reaction: the emergence of desire as a means to regain the advantage over otherness. What is mine is not me, certainly, but it is less foreign than the other. This is basically what Oldtimer Hegel whispers in coded language.

But I’m afraid that his brilliant analysis has no more impact on the real than a fart on a oilcloth. Things do not happen this way, remember. The shock of meeting with the other occurs in infancy. Well, no, the annoying Meister Kant does as if we are discovering the other in philosophy class. Did this zombie teacher completely forget his childhood? It’s possible. Read him, one can not let go of a disturbing feeling: the one who has laid this thought has never been a child. Frightening, isn’t it ?

Wait, there is something else. The irreducible otherness that drives me out of the closed world of which I was the king and the only subject. It does not remind you of anything? But yes, congratulations, Leibnitz and his monad. It’s not my lemonade either, but I explain.

The good, the bad, the ugly

A good philosopher is a dead philosopher; he can no longer contradict his opponents. During his lifetime, he thinks in a cage. The bars of the cage are the philosophers who preceded it. Each new philosophy pretender must (such is the law) make allegiance to a master philosopher of the previous wave. Hegel does not do anything else, he thinks in a cage. Or rather he does not think, he goes around in circles, like a captive bear. He gives allegiance to his direct predecessor, Leibnitz, himself a disciple of Descartes. Wild Bear Hegel is hardly friendly with Leibnitz: “the suppression of this Other who presents itself as an independent life.” In a few words, he shots him down and throws away the monad in the dustbin.

That’s not enough. The beginning of the sentence also evacuates the Master of the Meister, namely the old Descartes who started everything. “Self-consciousness is certain of oneself only if …” Here is the cogito reduced to ashes with a feather stroke! Let’s bet it’s a goose feather. A little language of goslings in this jumble can brighten the mental nothingness. Where is metaphysics here? I see only settlement and pillor. Prove that you exist by erasing the halo of your masters. But do not forget to always honor the supreme master who created you, to serve him, to satisfy his good pleasure and to bicker with your fellows.

Until the coming of a UFO, which started visionary and crazy ended, that forever changed the way of seeing Greece, philosophy, our destinies, the meaning of life. He preached the surpassing of oneself to finish surpassed by the world. Friedrich Nietzsche looked at the gods and devils in the eyes, before burning himself in the sun of love.

A thief of academic thought, Nietzsche is a genuine thug, an outlaw. He was two centuries early when he pointed the old philosophy, taking hostage European thought, with what brilliance! Poet, magician, sorcerer, warrior, lover, too innovative not to scare Norman Normal and his like. Few philosophers are his humble disciples. Michel Onfray was one on his prime, but he has not very well matured: he is neither humble nor disciple. His sword broken, his armor in pieces, the university knight turned into a television troublemaker. Ice-cold show. Stay a child. Believe in the unconscious who made you, cultivate your dream, stop sulking, do not pout. In memory of your archangel, Michel, dominate the dragon of ego. 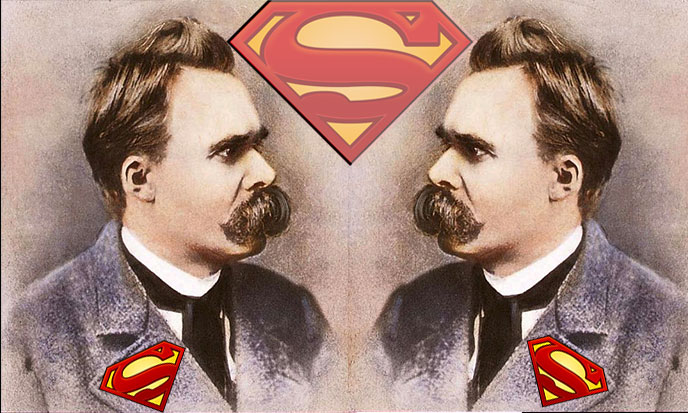 I who speaks to you, underground philosopher, out of the box thinker, humble artisan far from the seraglio, I claim at once the irrepressible spirit of childhood and the immense heritage of Maestro Nietzsche. I will take care of it, and I will blow up the frames and the systems, trying however to keep reason. Labeled philosophers sneer, others join. Nobody cares indeed, except you darlings. That’s fair enough: you’re the ones I’m writing for. Let them read other things.