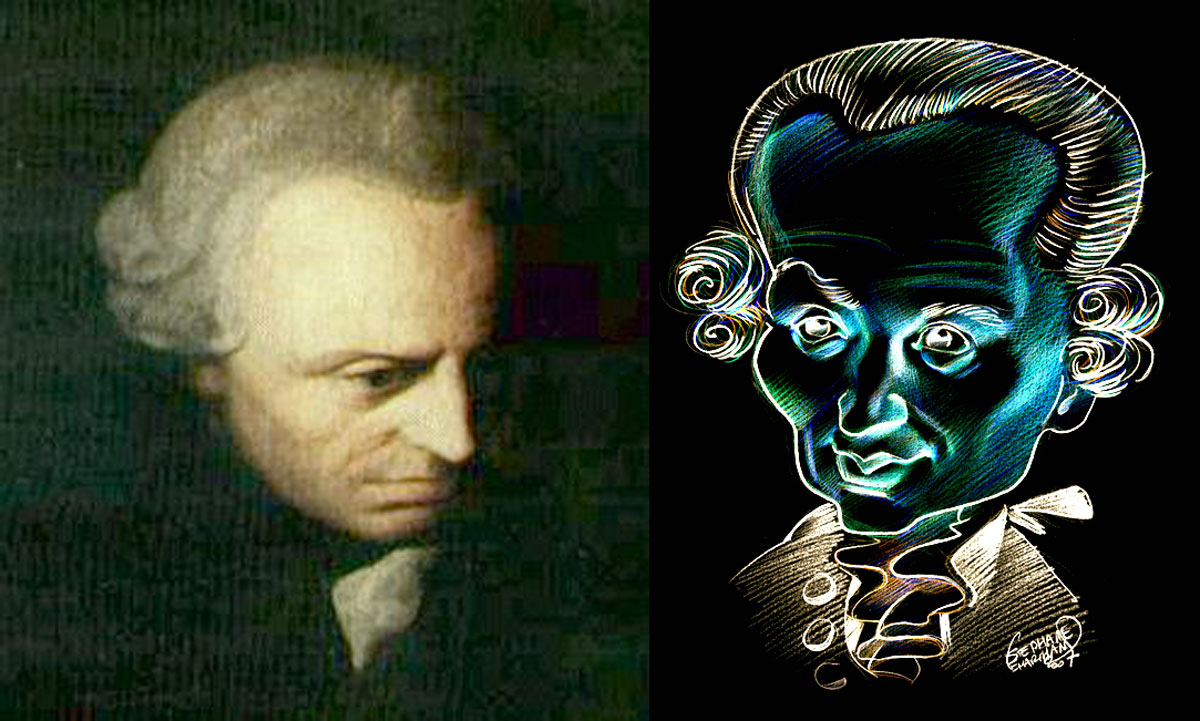 When Immanuel Kant publishes his masterpiece, he is 57 years old. He has never left his hometown. The only trips he has made are in his head. Like Jules Verne, you may say. But Jules Verne is less boring.

In the Critique of Pure Reason, in German Kritik der Reinen Vernunft, “the Prussian philosopher analyzes the different faculties of the mind, and tries to establish that our knowledge is limited to our experience.” The trouble is that Kant’s experience is strictly limited. So, you already have less desire to read this staggering sum. This overview will suffice you, take my word.

Fan of routine, adept of conformity as of conformism, maniac of exactitude and dogmatic rigor, Kant has literally poisoned generations of ex-friends of wisdom.That is the meaning of philo-sophia In his defense, he almost disgusted them with his philosophy, which is a good result. This book, his most famous pensum, nicknamed the Cripure,in French! became for them the archetype of the pile of dung. Just like Kant is the caricature of the useless thinker.

This jolly good fellow has not much to say, and to make up for this gap, he invents words that are as hollow as they are endless – so long sometimes that they exceed the format of a page! To understand them, one has to go to the end of the word nxt page, in order to pull it upside down, as the genius of the German language wants. When I was doing my masters of philosophy – keep simple & call me Master – it was said that the German schoolboys preferred to study Cripure in its French translation rather than in their mother tongue.

What can we know?

Cripure raises the question of the limits of knowledge: what can we know? What we believe we know is it true? All the theories of knowledge have dug it, those of Descartes, Malebranche and Spinoza, those of Leibnitz, those of Locke and Hume. Do our ideas correspond to something real, or are they fictitious? Is the outside world really as we think, and as we see it? Are our theories about the world true? (source)

Fantastic ! Castaneda wonders that too! Like me, I do not stop. I have always wondered. And I change my mind every seven years. Or every five minutes, it depends on the wind. This is an enticing program. Could old Kant help us see through the astonishing jumble of Eden Saga? 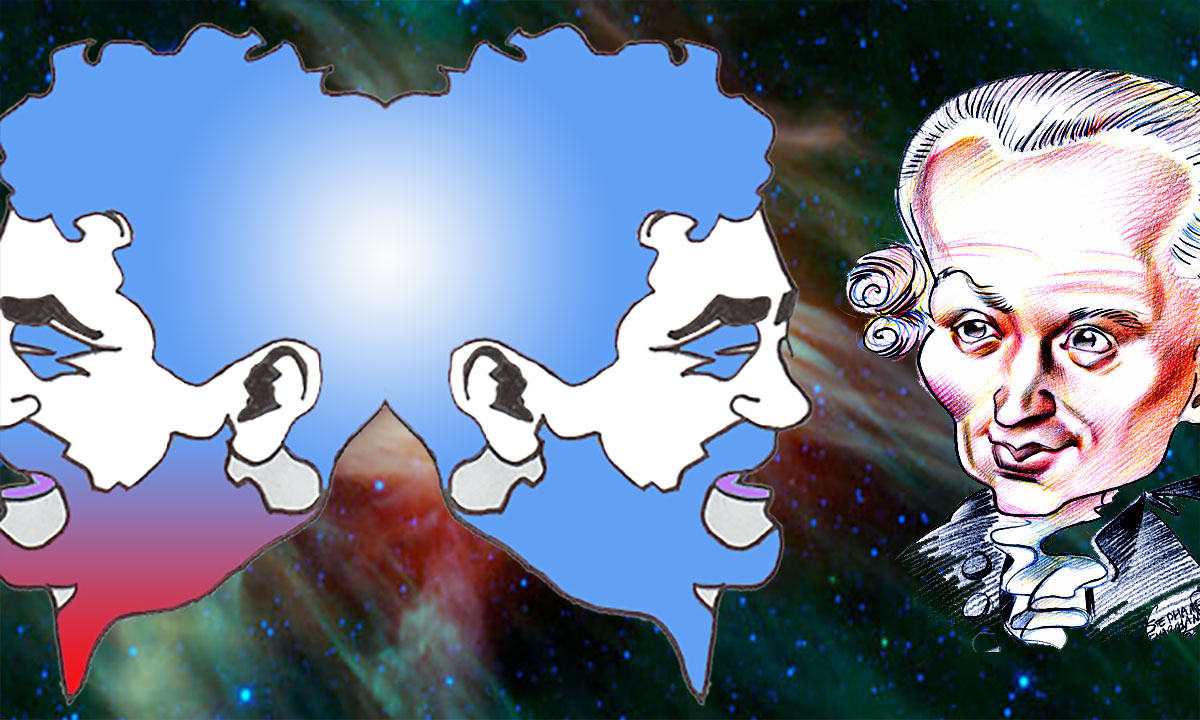 Would the Prussian philosopher have solved the great enigmas of our history? Would he have unmasked the super-lies about our origin? Could he decipher the runes and tudesque, that old High German so close to the original galactic language, where the prodigious secrets of the gods before are hidden in the eyes of the profane? Emmanuel, the God among us, would he be a reliable guide to explore the thousand worlds of the astral?

Forget it! He is not at all. From an early age, he was an old man. So at 57, I let you figure out! Too bad. With a little less logic and a little more intuition, Immanuel could very well have incarnated the god among us that we promised his name. But no. The big fool dug the abstruse.Hard to understand, obscure. Example: an abstruse language

I do not understand why we still stuff the skull of kids with such bullshit. Philosophy is life. And life, precisely, Kant knows nothing about. He stands in front of it like those catholic priests who receive future couples to prepare them for marriage. What could they know? Sad world and poor culture. Although I knew a deaf piano tuner. With his fingertips, he captured the harmonic vibrations. Good vibrations.

The cocoon of the fool

But let’s move on. What could that dear Immanuel have told us if he had not been so obscure? Many things, in short. His questioning is sincere, at the beginning. These are his answers that suck. Starting from the observation that metaphysics can not claim the status of science, on a par with mathematics or physics, he claims to make up for this insufficiency by scrutinizing the limits of reason. It’s clever, but very inadequate.

Pure reason is not the right instrument of investigation when it comes to studying phenomena that lie “beyond physics” — what the word “metaphysics” means. I have sufficiently denounced the mind, the fabrication of fantasies and reasonings, as being diametrically opposed to awakening. The identity that I posited between the mind and the ego seems to me clear and definitive.

The ego is the only part of the being that will never know enlightenment, teaches the Lamaist tradition. To meditate in a pure way, it is important to have your head empty of thoughts and images. Thoughts, especially logical or mathematical thoughts, are the strict opposite to intuition. The brain has two hemispheres with antinomic and complementary activities.

But the right brain, underused in our dark age, is largely annexed by the dominant left hemisphere of which it has become the subcontractor. Note that the usual notions of right brain and left brain are not used in this site. I prefer the Castanedian notions of right and left side, which apply to the physical body / subtle body / aura, and which are reversed in relation to the brain.

The nagualist philosophy taught by Carlos Castaneda seems infinitely more fruitful to me than the old Kant’s rantings. Because it does not rest on the intellect first. Because it is a philosophy of action, while that of Kant is confined to reflection. His anemic experience does not go beyond the narrow confines of his native cocoon, Heidelberg, the neighborhood where he lives, the streets he takes his life long to go to the same place: the school, then in the same building, the university where he studies before becoming a teacher. Sad, sad song.

To think is not useless, provided that experience is the object. The more rich and intense the experience, the more fruitful the reflection. A poor experience, a narrow emotional, a zombie or robot experience do not provide significant data to the work of intellectual analysis. Live first, then think. And the least possible!

In this end of kali-yuga, it is impossible to count on your brain to walk towards enlightenment. To find the way, you have to cut your head, as Lao Tzu said. (source) That’s why I hypothesized to use the power of the belly rather than those of the head, which is weak, egotistical and contaminated.