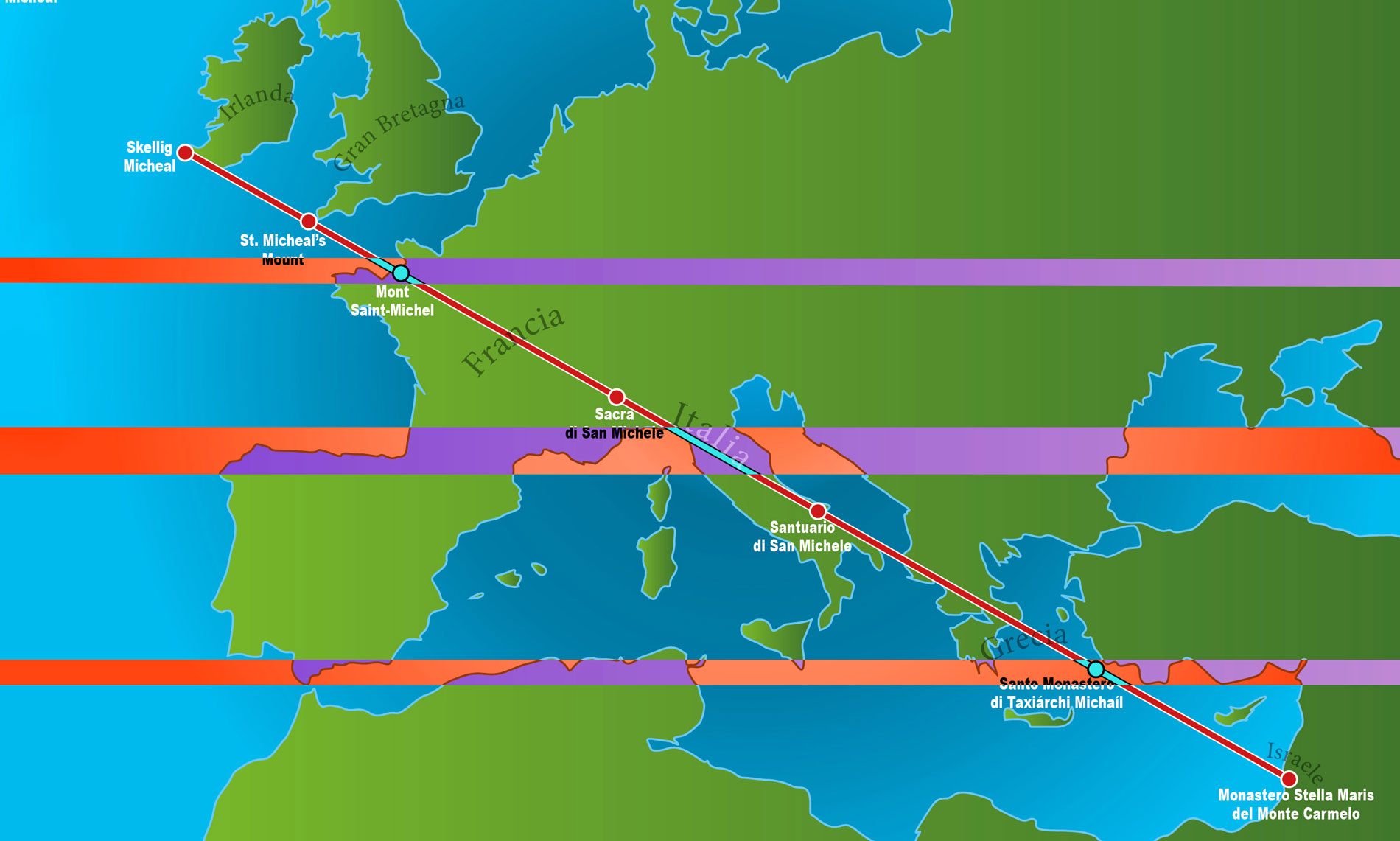 Inside the matrix, between the walls of the jar, run lines that intersect and convey light energy. These lines crisscross the planet Earth, they are found in the stars and in our luminous body.

The Earth has a major energetic characteristic: it is traversed by a network of energy streams, large geo-magnetic avenues of 50 km or more, through which circulates a powerful subtle current that boosts the entire flow zone. Most of these currents are oriented west-east, in the direction of the prevailing winds. As for the winds, the electron flows seem to follow the direction of the Earth’s rotation. For several decades, geobiologists and other independent researchers have highlighted the fact that these flows are distinguished from the rest of the planetary surface by a large concentration of megaliths, ancient temples or medieval cathedrals.

Other networks of subtle energy also have a high density of sacred constructions, but their orientation is diagonal. These are the famous Ley Lines.

“Ley lines are apparent alignments of land forms, places of ancient religious significance or culture, often including man-made structures. They are ancient, straight ‘paths’ or routes in the landscape which are believed to have spiritual significance.” The phrase was coined in 1921 by the amateur archaeologist Alfred Watkins, referring to supposed alignments of numerous places of geographical and historical interest, such as ancient monuments and megaliths, natural ridge-tops and water-fords. In his books Early British Trackways and The Old Straight Track, he sought to identify ancient trackways in the British landscape. Watkins later developed theories that these alignments were created for ease of overland trekking by line-of-sight navigation during neolithic times, and had persisted in the landscape over millennia.” (source)

In recent decades, the spiritualized version of the concept has been adopted by other authors and applied to landscapes in many parts of the world. These lines have never left me indifferent, I happened to test the reality of two sections on the ground. But for me, here and now, that’s not the question. Providing evidence of the energy reality of Ley Lines is the prerogative of many independent researchers. I salute their work. To believe it or not is the free choice of the reader, to whom I always advise to take the maximum distance with the thing read, especially on the web. Ask yourself first what person is talking to you, ask yourself if the content is useful, if it helps you to see clearly, or if it is confusing. See if the information is first hand or stitched elsewhere from the web, if it comes from readings, if it is lived and understood –in this case you also understand, and the content is touching you. How comes ?

The wings of perception

We have an inner device –sort of radar equipped with a silent alarm– to warn us of a danger, to warn us about a suspicious person, to warn us of a disadvantageous deal, monkey business or any foolish project. It can save the skin and soul of those who know how to use it, you know, these people that others find always lucky. Lucky ones, they are not. Like chance, luck does not exist. The so-called lucky people use a second form of attention, they use hidden powers of their light body –radar, sonar, inner healer, internal clock, and a thousand other self-directed gadgets in the depths of the subconscious. This radar not only warns of danger, it gives the green light in front of any trustful person, any honest and fair project, and a lot of other positive things.

My texts appeal to this capacity for analysis that owes nothing to logic, nothing to the mind or to consciousness. But owing everything to the unconscious, to the intelligence of the belly, to the neurons of the intestine. I am going to ask you now, dear reader, my friend, to extend your wings and follow me in my flight over the telluric lines. I see lines of force, these are the lines of the Good Lord’s hand. In another repository, these are the algorithms of the Global Matrix Program. My good guys, too bad, but not too late. We can cope with it, my checks. Crazy thought, free thinkers, fair line, middle way, we assure and make sure, you climbers of emptiness, you voltigous tightrope walkers. 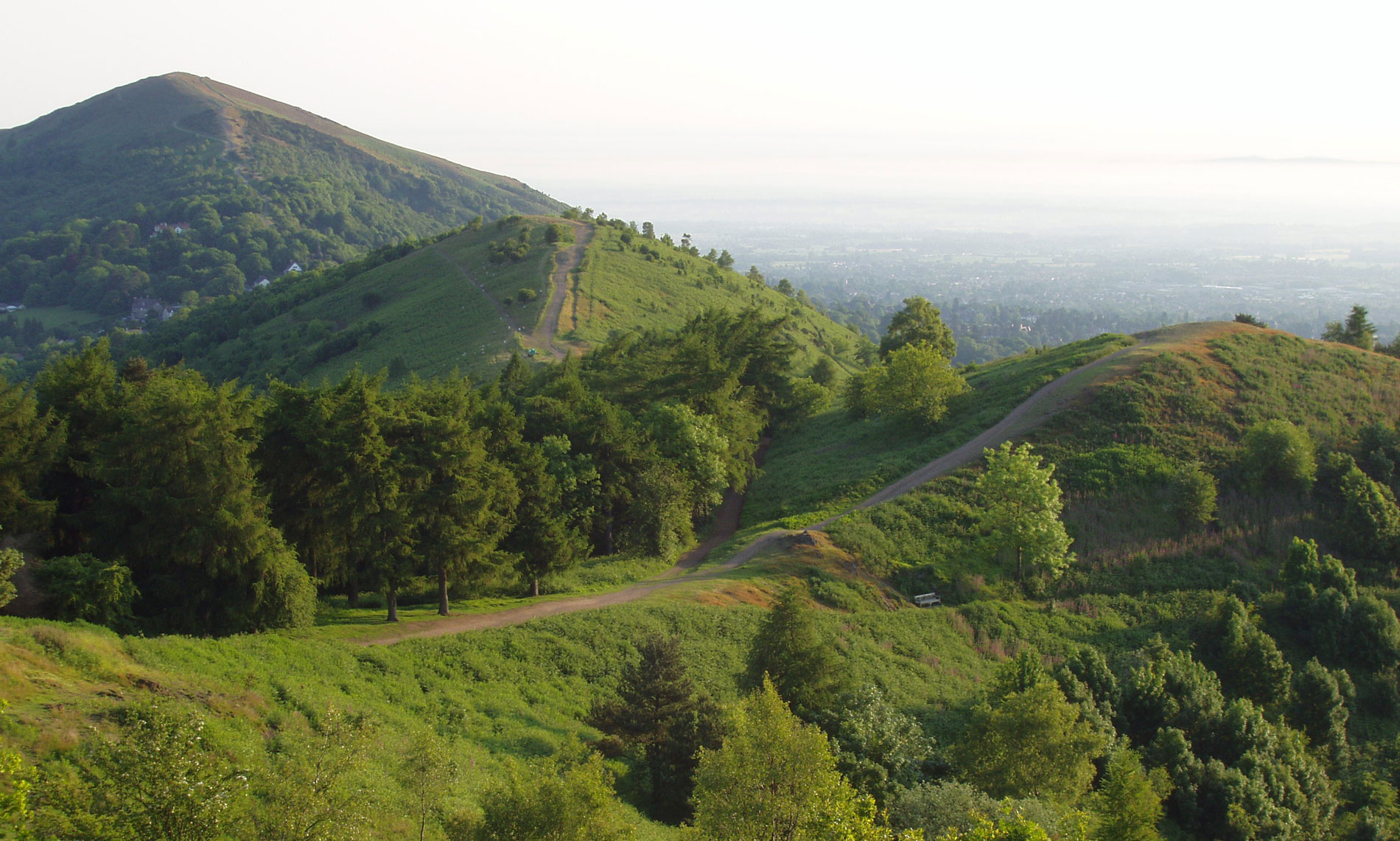 On top- The Malvern Hills in England. Alfred Watkins believed a ley line passed along their ridge.

“The telluric line hypothesis is a type of pseudoscience. A random distribution of a sufficient number of points on a plane will inevitably create random point alignments only by chance (source).”

In addition to an insufficient command of the expression and a marked taste for the redundancy, this affirmation made in Wikipedia pushes open doors again. A pseudoscience? Get lost!  No, research on Ley lines is not science because they are carnal and current and honest. They do not have to answer for their projects or their discoveries to any cenacle of exhausted gurus, out of age and off topic. This kind of quest come from the heart and belly of sincere independant researchers, as we are all, my brothers and sisters.

A question arises in my mind: are these lines of light energy a natural feature, or were they created by the construction of megaliths, temples, pyramids and cathedrals? Do they come from nature or are they artifacts? In other words, if we removed all the polarized buildings that follow their path, would they still work? I want to study the secret relationship between the geography of these lines, astronomy and our body of light. And for that, I’m going to use Castaneda and a previous life of mine.

The Light-Energy network of Juan Tuma

“Juan Tuma told us about his travels, he always kept to the facts, I was hypnotized by his dry, crisp stories of events beyond my comprehension, and for me, the most fascinating was his description of certain clusters of light or energy that, he said, formed a network around the earth.These beams do not undergo fluctuations like everything else in the universe, they are fixed on their network that coincides with hundreds of points in the luminous body. (source)Carlos Castaneda, The Eagle’s Gift”  The latter is not limited to our physical body. He is very tall, “some of these points were, in fact, more than a meter from the physical body itself.” These points are therefore outside us, but not really, since our luminous body is part of us, even if we are not aware of it. The points are within the limit of our brightness, so they still belong to the total body. “The most important of these points is about 30 centimeters from our stomach, 40 degrees to the right of an imaginary line drawn straight into the middle of the body, Juan Tuma tells us that it was a gathering center for the attention second, and that it was possible to handle it by gently stroking the air with the palms of the hands. (source)Carlos Castaneda, The Eagle’s Gift“

You start to see where I’m coming from. Here is the continuation. I recently related the curious science developed by Théorima, which consists in decrypting stars’ alignments in the night sky, assembling them to form diagrams, then incorporating these geometric structures, arranging them in the physical body in order to control our emotions. If you stall, read the life of a female teacher in ancient Greece, here is an excerpt:

“At night comes the practice: we observe the stars, in my system each star corresponds to a simple emotion, which I call an emanation, sometimes it takes dozens of emanations to make a complex emotion, such as jealousy or reactive anger It is interesting to observe the positions of the stars in relation to each other It gives a schema I then teach my students the art of placing their emotions in certain parts of the body, in order to reproduce this For example:
– Do you feel your anger? Move it out of your heart. Put it down in your left heel. You’re there ?

Or :
– Spread your sexual desire in your fingers.

I have traced in the starry sky a human body where each star represents an emotion. On this astral map, emotions and emanations are all in their proper place, in the exact relationship to each other. It is the state of harmony that makes man a wise man. It is an infallible mathematical method that allows one who masters it to no longer be the puppet of his passions.”  (source) 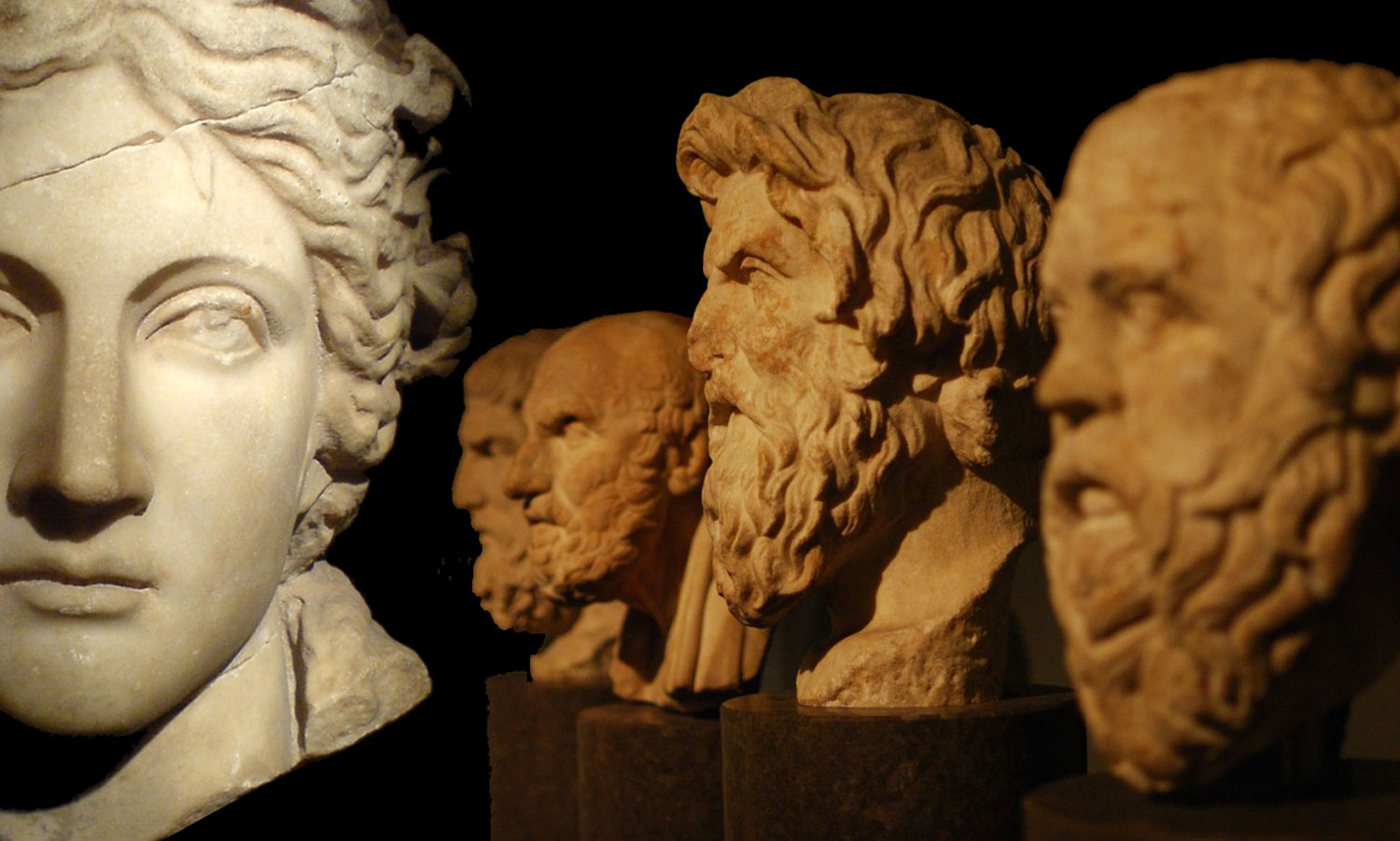 It is now about putting everything in the mixer and rotating the propeller. We obtain a beautiful dough, ready to bake. Here is what comes out of it. The lines of force and sacred flows trace figures that are found identically in constellations and other stellar alignments. These diagrams conform to the matrix algorithm: we find them everywhere, from the smallest to the largest. I showed that the spiral is a spontaneous form. It is the same for these figures who seduced Pythagoras and many other curious minds. They are magical because they contain the key of the Global Software. Their magic helps to find the emotional balance, the wisdom and all the powers of awakening.

Your mission, if you accept it, is to discover some of these magical figures. They are everywhere, so easy to find. The knowledge of these schemas opens that of the very structure of the universe and all that it contains. Read carefully this text, click on the links there, let yourself go to the peaks. And when you come back from your great journey, you will be on the other side of the mirror of illusions. Vivid or dead, you will be forever conscious. The rest does not count. Attention, this precious page can self-destruct without notice …