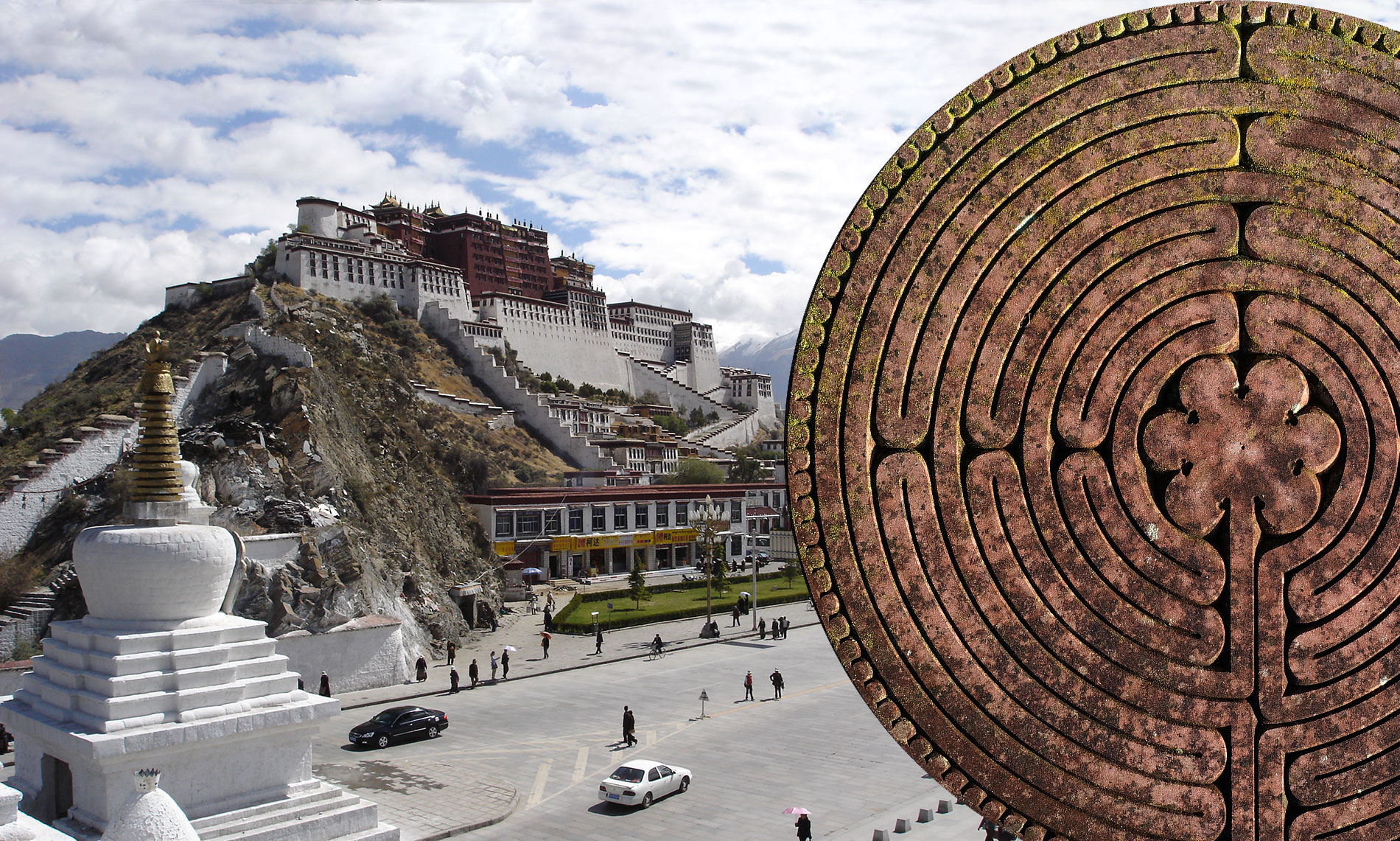 You know that I receive an abundant and varied mail, all topics are covered. A reader a reader who is passionate about geobiology recently told me about a very powerful cosmo-telluric abbey. Much more powerful than the eye of the labyrinth of the cathedral of Chartres, he writes me. This surprising finding deserves some explanation.

There are two kinds of vril. The first, the cosmotelluric vril, exists in certain places and can easily be measured by all geobiologists. Variations will be recorded, but in reduced proportions. The second is the human vril. It is very variable from one subject to another, and it can interfere with the local cosmotelluric vril to the point of multiplying its power in considerable proportions.

In several articles, I mention the eye of the labyrinth of Chartres Cathedral as the highest vibrating point on the Bovis scale. He shares this privilege with the Lhasa Potala in Tibet. After reading my article written n reader wrote me this:

The energy flow observed in Chartres is considerable, it’s true, but I experimented

more powerful in the abbey of the Trinity of Vendôme. I did not expect it, I was just there and visiting it I took a slap energy in one of his chapels. Huge, at the limit of the bearable, wrote me a reader. I will not fail to go there if by chance my steps bring me closer to it.

Remember, the vibrant point of Chartres and Potala vibrates to 18,000 units Bovis (UB) on the classic scale. But wait for the next. I myself measured an absolutely considerable energy (3 to 4 times the labyrinth of Chartres and its equivalent the throne of the celebrant in Potala, Lhasa, Tibet) in the crypt of Notre-Dame de Lumières, then to the grotto of Massabielle in Lourdes, which are two places of miracles, with a vibratory rate greater than 44,000 UB, and which can peak at up to 60,000 UB. 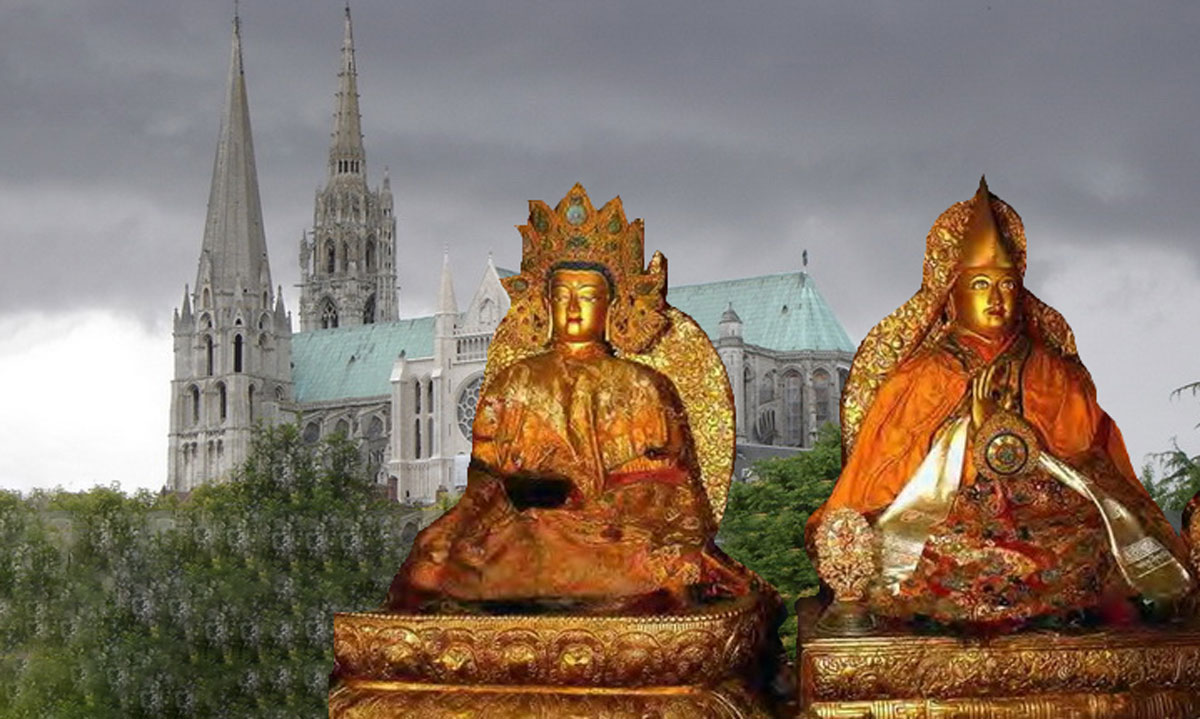 An imposing monolith protects my corner of Brittany, the menhir of Guihalon. for twenty years, it has always had a vibratory rate higher than 20,000 UB. I went there five years ago with a witch doctor friend. We recorded a vibration that was well over 40,000 BU. This irresistible surge of energy manifested itself in a burst of warmth and happiness, a sensation that was quite delectable. Since then, energy has come down a bit. But it was an incredible experience.

How is it explained? First of all it is important to distinguish two kinds of vril energy: the cosmotelluric vril and the human vril.

The first, the cosmotelluric vril, exists in certain places independently of the observer. I also call it subtle energy. It can easily be measured by all geobiologists. Variations will be recorded between them, but in reduced proportions.

The second is the human vril, which I also call the energy of awakening. It is very variable from one subject to another, and it can interfere with the local cosmotelluric vril to the point of multiplying its power in considerable proportions. It is consistent with this fact that quantum physics postulates and verifies another fact: the observer influences what he observes to the point of distorting the observation.

The observed is by nature deceptive. It is different when no one observes it … but how can we be sure, since any observation of an unobserved phenomenon is by nature impossible. These devils of quantum physicists have proved this in enormous books full of indigestible equations for the common man, of which I am a part.

There is vril and vril. Feeling the difference is a matter of practice. There is often confusion between the local cosmo-telluric energy, independent of the person who perceives it, and the energy induced by the emotional or that induced by the psi power of the perceiver. Much lower rates could be measured by a “neutral” geobiologist.

In the kind of place my reader is talking about, it is imperative to make many visits by carefully noting the bovis rate at each session. It is also important to have these measures checked by a third person who is less sensitive or less emotionally involved.

At least that’s what I honestly believed, following an experience on the edge of the emotional and the energetic. 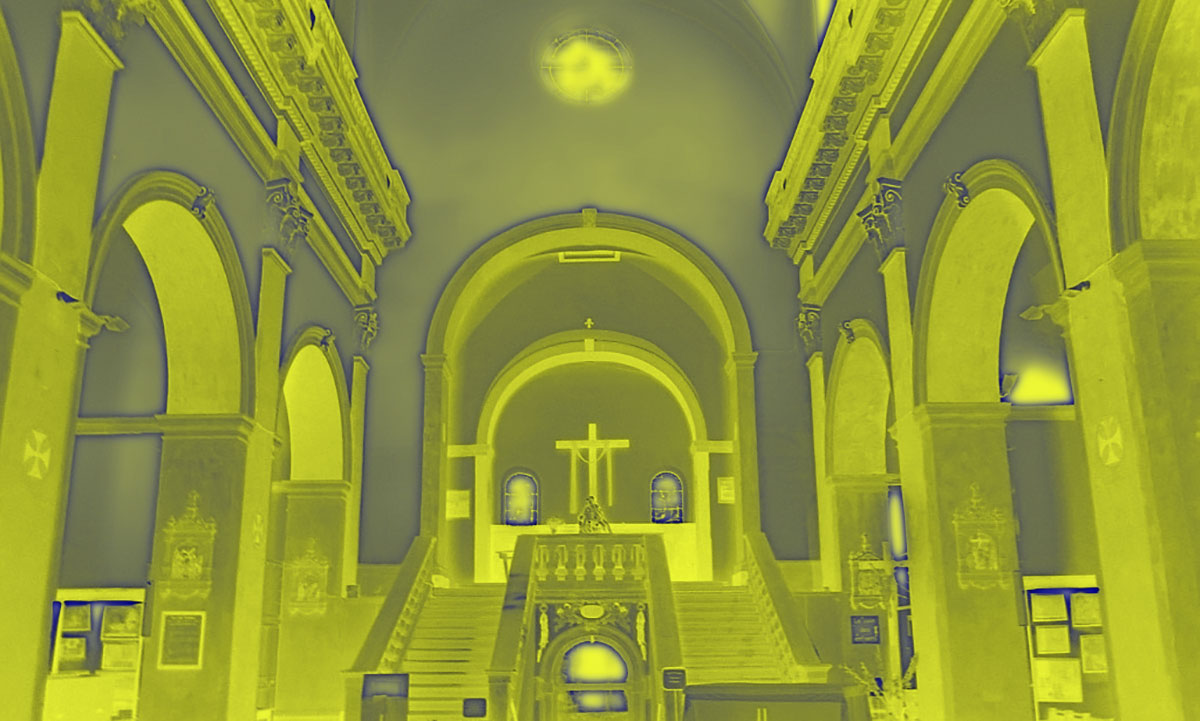 Our Lady of Lights

Some twenty-five years ago, I was on a magical journey with a haunting fairy, pretty Solenn. We were deeply in love, Solenn and me. Every landscape, with all its details, every new flower, every blade of grass was a subject of wonder.

Our footsteps gently led us to the Notre-Dame de Lumières abbey in Goult, Vaucluse. The place is not exceptional, neither in architecture nor in the setting. But when we arrived in the nave, facing the choir, we both felt an extraordinary breath of energy that left us panting. I pulled my pendulum out of my pocket and discreetly measured the vibratory rate of the place.

My clock made three turns of the dial. This church vibrated at a rate three times higher than the maximum rate, that of the labyrinth of Chartres. We slept in a quasi-monastic cell of the religious hospitality. Fabulous night on the wings of crazy love, enlightened tenderness and a sensuality of good quality. I recommend without reservation.

Back to my benefactor, I told him about this experience. He immediately deceived me. No point can exceed the free limit observed by several generations of geobiologists. It was then that he introduced the difference between pure vibratory rate, the one I call cosmo-telluric, and emotional vibration rate, ie the natural rate multiplied by the emotion or the energy of the one who the measure.

For more than twenty years, I remained convinced of it. I went several times to Lourdes, Vézelay, or Saint Benoit sur Loire. I did dozens of visits to the menhir of Guihalon, the Fairy Mirror in Brocéliande or the magic hill of Croquelien. The power of these places (and many others) has continued to amaze me.

Yet, whenever my measurements exceeded the fateful limit of 18,000 bovis, I told myself that it was emotional bovis, and I filed the file. In fact, I have not paid enough attention to the dramatic increase in the global vibration rate. Everything climbs, the level rises everywhere, including on the vibrating points. It was therefore necessary to consider the re-calibration of the Bovis scale. 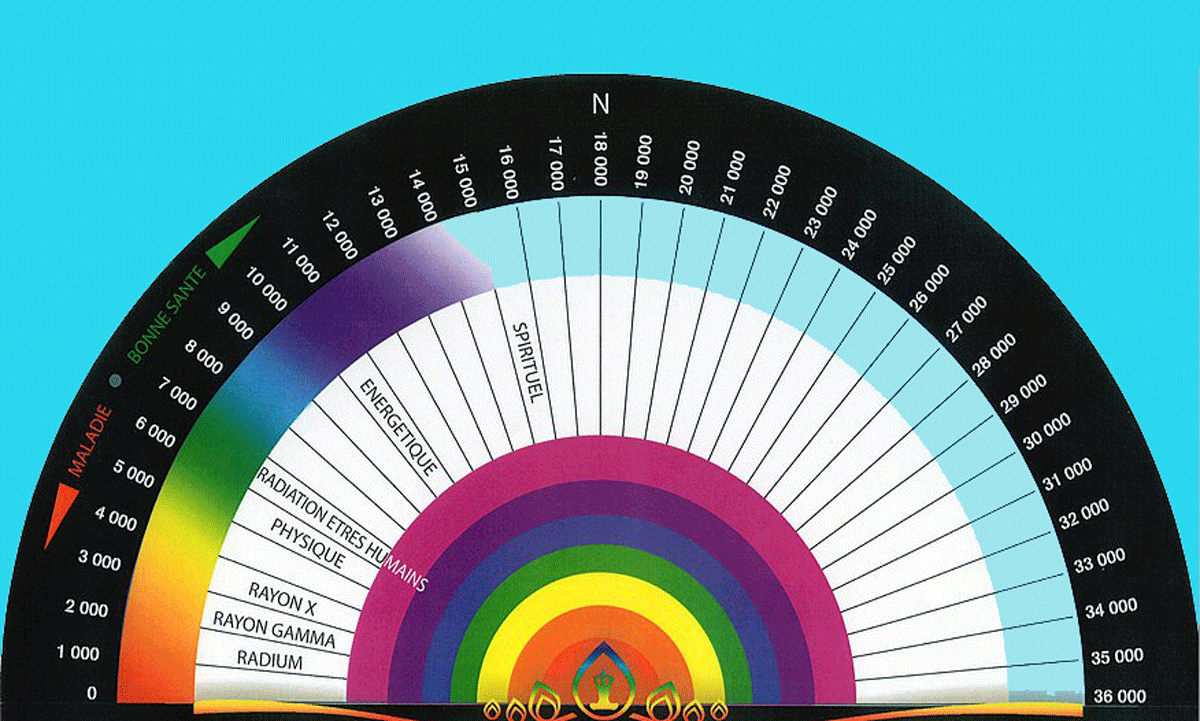 What was true in the 70s is not true in 2010. Since then, extraordinary surges have been recorded that make the old measures obsolete. The solar flares follow one another at a steady pace, causing photon showers that boost the vibratory levels. Obviously, vibratory rates increase with time. In 2014, a new Bovis dial was developed. It is not final and will probably be revised up soon.

If I measure the same levels, I can not accept this nomenclature which does not take into account the true subtle distribution of the levels of the unconscious according to the works of JCl Flornoy and myself. Here is the one I propose:

For Flornoy, the energetic and the spiritual are two labels on the same bottle. On the other hand, the emotional is located between the physical plane and the spiritual or energetic plane. Finally, it does not change anything in the measurements. Just the name. It is important. The inner realities deserve a fair recognition.

Speaking of recognition, let us salute Mr. Bovis for the tremendous work he has done. This pioneer probably did not suspect that his research would help so many people around the world. And the craze for this research is just beginning. 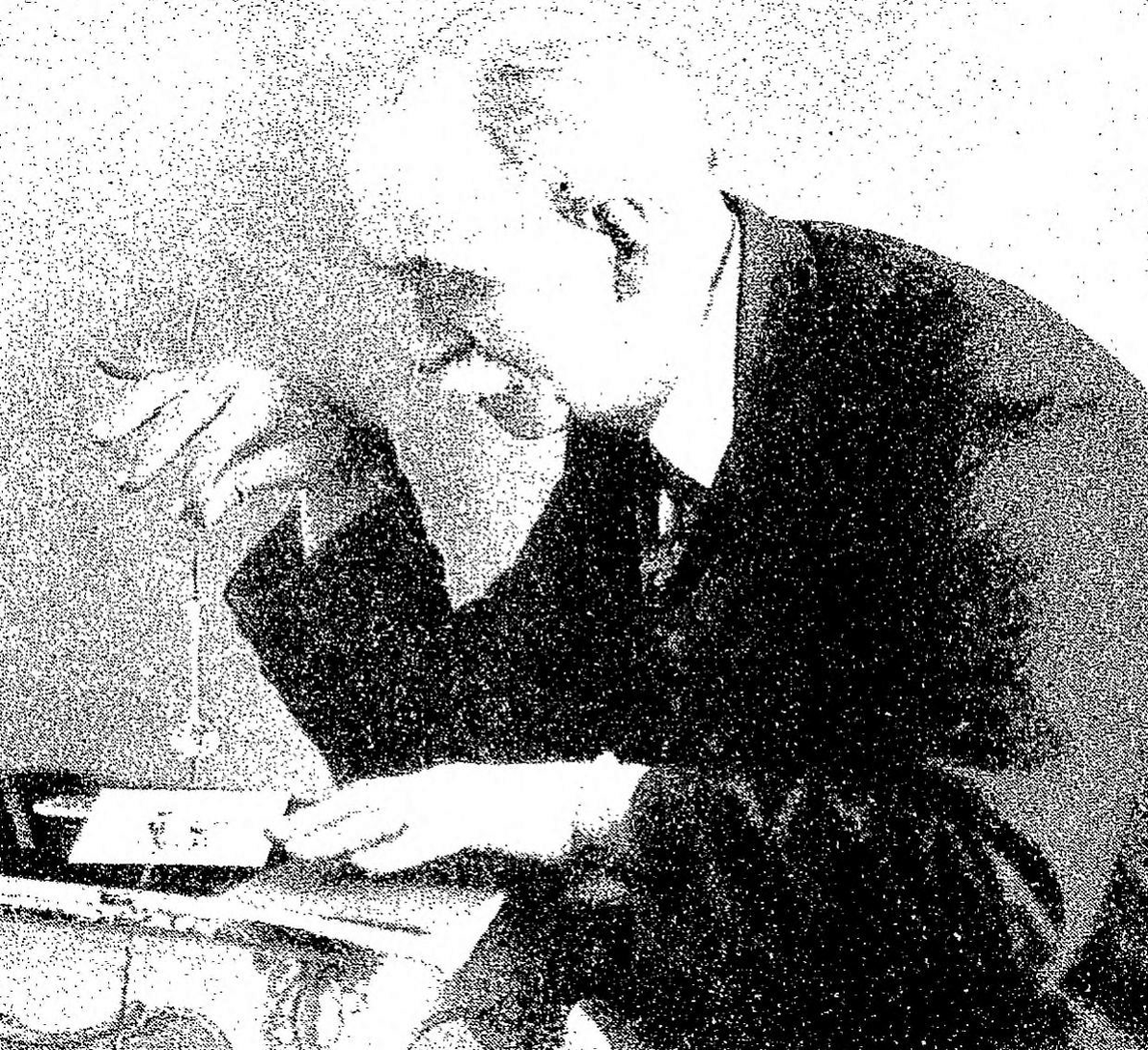