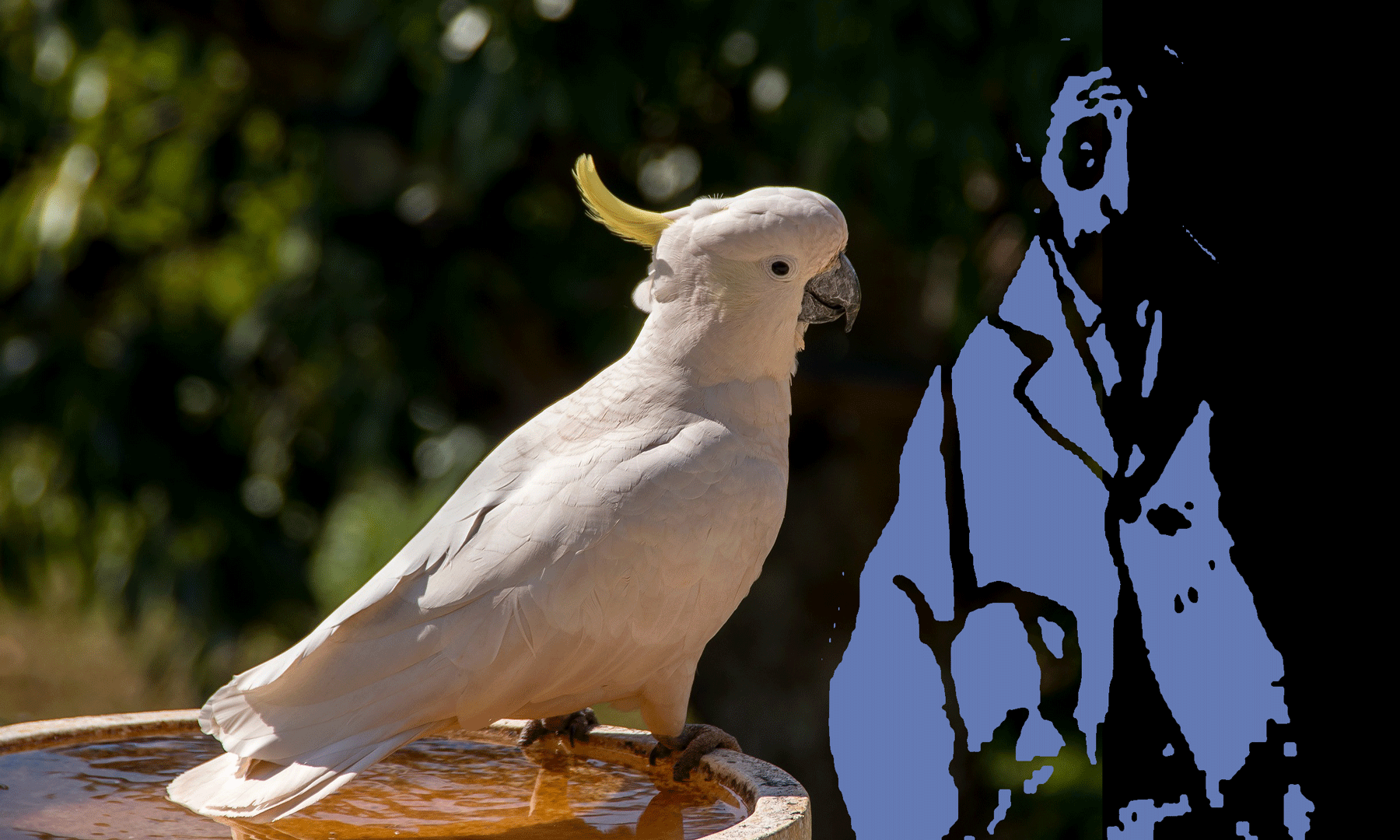 Pockatoo? Who is it ? He pulls hard on his leash. Watch out princess, he snorts your buttocks. Fear the caresses of old Pockatoo. Faced with declining moral, his libido increases. He presses you, he oppresses you, he is incessantly emboldened. Master of clumsiness, Patate is a great pretender. Who is him ? No promise, put your earplugs.

The guy has changed. He is disturbed. A real danger. He wants to eat everything, can gather everything, must harvest everything. He drinks too much. A hole he is, quiet, he drinks, gasps and collapses in a heap. But in what state ! With emotion, I see the old days when I loved him so much. He rocked my childhood dreams, he spoils my grown-up nightmares.

Forget it? I forgot to forget. Here I am at the age he was when I knew him. I fled the city thirty years ago. I was 42. I returned to my Brittany, I found it a little too crowded during summer. Jealous of my tranquility, I made myself a lighthouse keeper. Frankly, my headlight has been automatic for years. So deserted. No more caretaker. So I rented it for an effort. My role is to repair what must be – without touching the rotary projo, the hydraulic tank, the mechanics, or the IT. I take care of the stones, windows and doors. This is my rent.

Why do I feel the tyrannical urge to constantly rehash the past excesses of Vieux Patate? Bloody psychopath. Peace to his soul, it was a donkey. He must be gone for years in his battered caddy, that’s what you think. This is what I thought. Who cares anyway? I do.

A beautiful evening in September, calm on the sea as in the sky, no wind, no stinging flies, no foam or waves breaking on the lighthouse, I can take advantage of the small terrace fitted out for transshipments. This is my solarium in good weather. Two kinds of lounge chairs were hollowed out and built on the rock by my predecessors. There I love to wallow with my eyes closed and my head empty.

It was warm, I grabbed my guitar and played my old hits. With a light heart, an empty head, I began to sing. My old compositions, first of all. The Whale, Old Comrade, You’re Beautiful, What’s the point Cathy, The Land of the Inside, The Gauls, Le Chevalier Ficelle, The Fates… And then again The Whale, it was a matter of circumstance. The big mammal propelled me with a stroke of tail towards the sailors songs, which are the folksongs of our coasts.

I sang at the top of my lungs. The guitar was shaking with rage and overload energy. It looked like an electric one. Now the sound volume was missing for the vocal. Immediately another voice, bass this one, accompanied me. Shy at first, then more and more confident. It was so natural, essential! The harmonies rocked me for long minutes before I reacted. Where does this voice come from? I gently put my guitar down and turned around even more slowly.

And I saw him. He smiled at me warmly. He said: We are not singing anymore?

A warrior must overcome fear. Control the emotions. I didn’t scream, I just rubbed my eyes. The next moment he was gone. I called him, I looked for him in the lighthouse, on the islet, it was quickly seen. He disappeared. Another hallu.See nation? 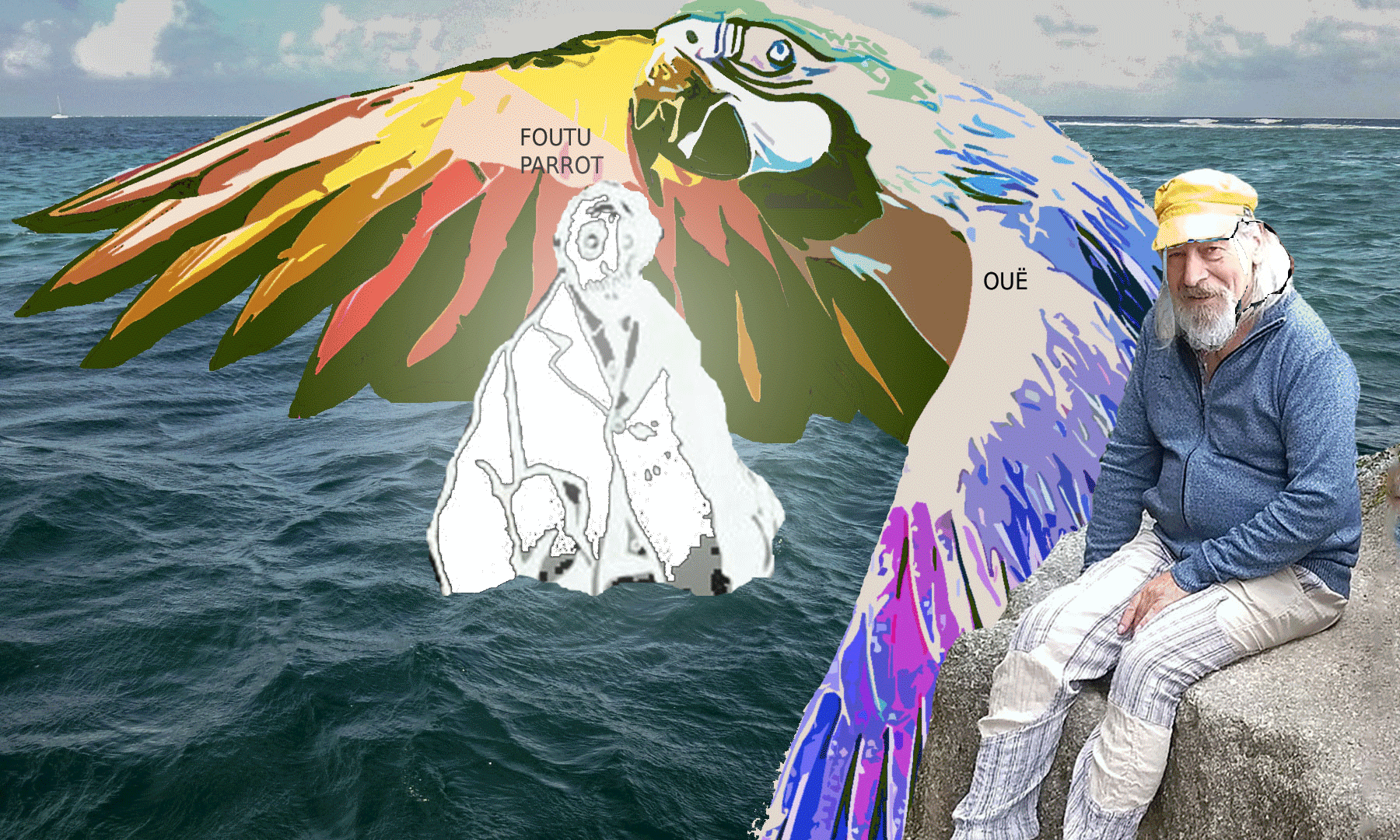 I was tired of all this bullshit. I wanted my peace, interior, exterior, total and lasting. I always wanted it and never had it. It was probably too much to ask. I have never been quiet for a single second, I who have lived alone for so long. Halluses, visions, mirages, ghosts, ghosts, specters, egregores, I can’t take it anymore, I ask for peace. YES PEACE !

But that is still not on the program. I took up my shabby guitar, I embraced it lovingly, gently, very gently, and I played the concierto de Aranjuez for myself alone. It has always done me good. Three days passed without a fuss. And as I sat down for my lunch, the voice of Potato was heard behind me.
– How do you want your eggs?

I don’t eat an egg. Besides, I don’t have a hen in my lighthouse. And I deplore it. So I would like to know where this smell of grilled eggs comes from? Same droid as the potatoid voice. He came back. Obviously.
– Yep! I am back on the rack! exclaims the Old Man with a heavy laugh. What are we doing this morning? Sing ?

Piss off Patate. I can’t get enough of you. Lack of luck, from that day, September 22, autumnal equinox of the year 2010, Pockatoo does not keep me out of sight. I am cursed, I bear the consequences. The dreadful beast holds me by the balls, it will not let go of me. Piss off.

Already the fact that he reappeared here, in the open sea, a thousand leagues from his midst, too far from his damn dirty suburb – it was totally incomprehensible. But there is something else. When I lost sight of him forty years ago, the Old Man was no longer very young. Now it’s my turn. Time flies for everyone.

Except for him apparently. He hasn’t changed a bit. Still the same as before. Like me now. It even looks like he’s making the bastard younger. How it is possible ? When I think about it, it wasn’t changing back then either, but I wasn’t paying attention. I was the dunce at bush school, in the thugs’ playground. A guy who don’t give a dime for nothing.

Hey God if I had studied
In the days of my crazy youth
And to good morals dedicated,
I had house and soft layer.
But what ? I was running away from school
Like the bad kid does.
Hearing these words
My heart is almost breaking.
(Francois Villon)

For sure, Patate could never have spit that out! What a tempo! What a sorrow! Villon was sentenced to death and it feels so strong. Elegy. What about the idiot? Why has this animal remained the same as it was forty years ago? So he doesn’t get old? Why, eh? Why ??

I promised myself I would make him speak. He must have smelled the stuff, because over the next few days and weeks it would appear and disappear too quickly for me to have time to cook it. Phantom of Fan Tom, his sudden occurrence slapped me every time. And his departure without warning in the middle of a sentence, every time, made his foot bang my ass.

It took me a while to let go. Standing in front of the gray door, fingers in the socket, I save the day. I fear the worst. What door? No fear. I will open it, I’m on the road to find out. Sigh! Time to end. Stop the rain in my brain. Learn to smile again. The best becomes worse, my donkey for a horse, the seer becomes mir.

A mir, which is also spelled myre as Nicholas of Myra, is an enchanter from central Europe where the name means peace. And when he breaks my balls with his boring tricks, I pushed him back by shouting his name: PEEEEEEACE !!! QUIET PLEASE !!!! Don’t stick at me, Rumi. Leave me alone, abalone. 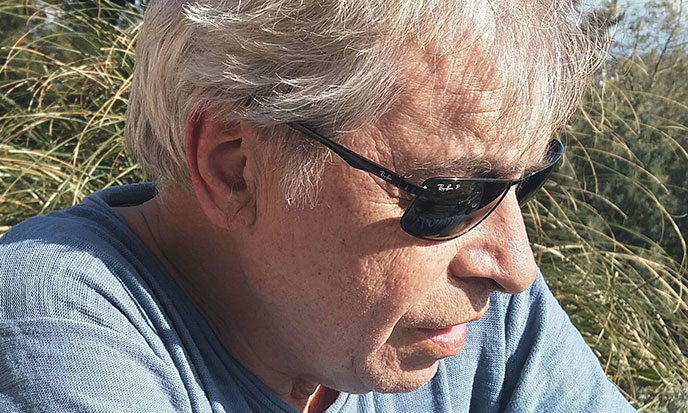 I guess he flew away for good. Long gone like a turkey thru the corn. (listen) Rest In Peace Vieux Patate.