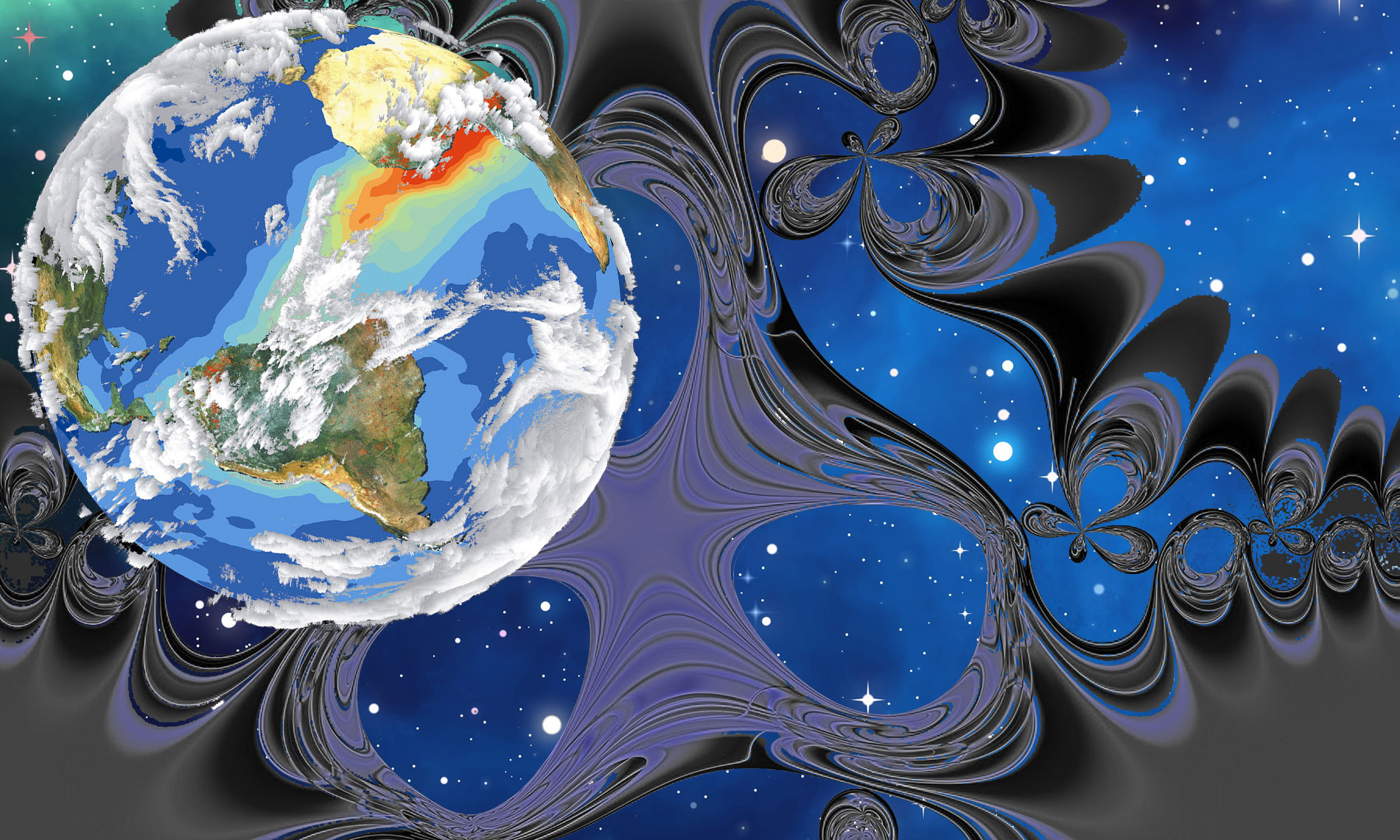 All the ancient traditions give an important place to this theme: the sudden appearance of a cosmic chaos. This is a global disorder, the stars falling and the waters coming out of their beds. If the phenomenon described is always the same, the reasons given are quite full of imagery. And far from the unbelievable truth.

In Norse mythology, the gods chained the wolf Fenrir at the earth’s axis, the ashtree Yggdrasil. Yet Fenrir finally broke his bonds and escaped: “The wolf shook himself and the world trembled. The ash Yggdrasil was shaken from its roots to its top branches. Mountains crumbled or cracked from top to bottom … The earth began to lose its shape. Soon the stars drifted in the sky.” (Source)Graham Hancock, Imprint of the Gods, Pygmalion, 1995

When the axis of the world was shaken, came the Apocalypse. The same Nordic legends tell us how the Aesir, the gods of Valhalla, flying to the rescue of the order, take part in the last battle of the gods.

“There are five hundred and forty doors in the walls of Valhalla, eight hundred fighters come out of each door to battle the Wolf.” (Source)Graham Hancock, Imprint of the Gods, Pygmalion, 1995

That makes a lot of people for a Wolf! In fact, the total number of combatants: 432 000 directly refers to the phenomenon of precession, as shown by Graham Hancock.

J. Sellerscited by Graham Hancock, op. cit. p.254 has detected the presence of most of these precessional numbers in the myth of Osiris. Following him, Graham Hancock listed the traditions from various continents also containing these figures, and each time in association with a global shock, followed by a flood. The repetition of these figures can not be a coincidence. Through these different myths, the ancient gods wanted to send us a coded message that we have to decipher. A game whose stake is the survival of the species.

“Among the multitude of gods worshiped by the Maya, there were four whom they called Bacab. It was, they say, four brothers posted by God, when he created the world, at its four corners to support the heavens and prevent them from falling. They also say that these Bacab ran away when the world was destroyed by a flood.” (source)D. de Landa, Yucatan before and after the Conquest, Mexico, 1990, cited by Graham Hancock, op.cit. But Graham Hancock added that the bas-reliefs at Chichen Itza are undoubtedly the Bacab portrayed as European style bearded men.

The myth of the Bacab tells us the same story as the myth of the wolf Fenrir, or that of Atlas. What story? Formerly, the Atlanteans had straightened the Earth’s axis, perpendicular to the ecliptic, so that it coincides with the celestial axis. It was the time of order. In our part of the world, the round of seasons gave way to an eternal spring. This was a reign of abundance and perfection that was remembered as a golden age: the garden of Eden, present in all myhts.

The celestial order prevailed so that the ellipse described by the earth around the sun got more regular, losing its usual eccentricity. The year then lasted three hundred and sixty days, it was divided into twelve months of thirty days, offering an exact replica of the Great Year.

Worldwide legends say it was the age when gods lived among men. The Sumerians recall an era of abundance, the garden of Eden of the Bible. 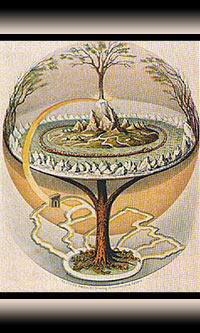 But something, probably a star collision, disrupted the celestial mechanics and put the Bacabs to flight, then the Wolf deflected the axis of the world, the ash Yggdrasil. The result was an imbalance of the earth, which then rotated on itself of 180°, the northern hemisphere becoming the southern hemisphere and vice versa. This is why the earth seemed to rotate in the other direction, this is why the sun, from that day, is rising east instead of west as it did before. Latin poet Ovid leaves no doubt in his myth of Phaeton.

All this is true. What is less so is the muddy explanation that is given. We can see at work the mechanisms of ancient myth: trying to put inexplicable events in simple words. Behind this, a more prosaic reality is hidden for millennia.

Captain Atlas committed a serious pilot error when he tried taking off the spaceship out of the Atlantic Ocean where it was moored, such an artificial island, since time immemorial. The giant ship is a globe of 2200 miles in diameter: it is understood that such a mass can unbalance the Earth. That’s what happened. The wolf Fenrir is Atlas or Atl-ase, head of the Aesir gods and leader of the Wolf Clan. And Atlas-Fenrir move the earth axis, Yggdrasil. All becomes clearer now.

A scholar correspondent tells me the following: it is not at all certain that Yggdrasil is an ash tree or any other tree. And it suggests a translation error.

“Yggdrasil means” horse of the god Odin “(from Yggr: formidable and drosull: riding) or” terrifying horse “It may be that there is a confusion between Yggdrasil and Sleipnir, the eight-legged horse that rides Odin capable. to move above the sea and in the air. Sleipnir can identify with “slippen” in German, which means sliding on the wing, and in Old Norse means “glider” or “one who slips quickly”. Odin is used mainly to cross the bridge Bifröst, the “glittering path”, which acts as a bridge between Earth and Heaven.

This is what I suggest for saga (cited …) it is again matter radius, space travel, spacecraft. Odin, son of Bor and the giant Bestia is able to travel on or in a scary transportation that emits or uses of radiation and is on the side of the pole (the aspect of “bor” éal) and Yggdrasil or Sleipnir are representations of the cosmic ray, the link between earth and sky.

And I tried a big gap to me blown by a fairy: Arabic, prophet translates Rassul, phonetic neighbor Drosull (etymology of Yggdrasil), which is no coincidence, since there not …

Rassul carries with it the idea of ​​the radius and travel, the so-called “prophets” are spacecraft, what you think now. So I suggested the fairy, why not look at the side of a orthoaxée land which communicated with heaven through the poles rays whose remains can still be admired with these so-called northern or southern lights. About austral, I am sharing a translation find: ausstrahlen in German means “that emits rays” (source)Alain Aillet, private correspondence

Totally agree with you. Clarification: not need radiation. Just above the pole was a huge mother ship, Hyperborea, also called Valhalla or Wal-allah, or Asgaard, the celestial Earth of the Aesir gods. And that is the departure of Hyperborea which caused an imbalance of the planet.

Why not Alain? Our two visions are complementary.

Let us look for the facts hidden inside myths. When you know what really happened, myths become so simple to decipher. 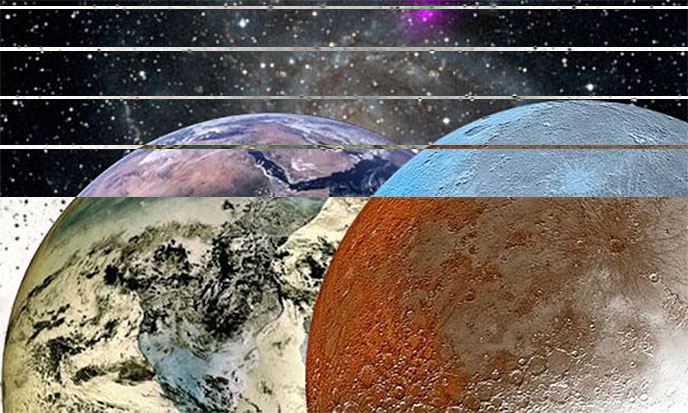