Etruscans and Yoruba, such a comparison may seem incongruous: the Etruscans inhabited northern Italy, they gave way to the Romans after being their guardians; while the Yoruba are an ethnic group in West Africa, still evident today. What connection can there be between two very different people? The right question is: are they so different that they look?

Through common beliefs, Etruscans and Yoruba appear as the same culture from Atlantic. They are two fraternal peoples, having long lived together on the island of Atlantis or in Amerca, and who have returned to their ancestral lands when the latter disappeared.

The Yoruba have regained West Africa, while the Etruscans joined Northern Italy, where they passed the torch of their ancient culture to a new emerging European people, the Romans. Indeed, it is an Etruscan she-wolf that nurtured Romulus and Remus, the legendary twin founders of Rome. In ancient Ireland, the Tuatha played the same role to the Celts: they instructed the Celts before leaving this planet …

Last century researcher Leo Frobenius made an astonishing parallel between the Etruscans and the Yorubas.

For him, Etruria and Yoruba country were two provinces of a very old “Atlantic civilization“ he identifies with Plato’s Atlantis. The Etruscans, a little known people installed in northern Italy before Romans, were probably direct heirs of Megalithics and Atlanteans.

The Yoruba country, known as the ancient gold coast, corresponds to the current Nigeria, plus Benin and Togo.

Frobenius stresses that the two countries, though far apart, share “this fundamental idea of the lightning spurting from the sixteen regions of the sky.” He mentions this “lightning conception that the Etruscans transmitted to the Romans.” (source)Leo Frobenius, Kabyle Tales The sixteen great gods whose homes are in the sixteen divisions of the sky,are common to Etruscans and Yorubas. That is why the cities were divided in sixteen districts reflecting the celestial homes and the personality of their sixteen divine occupants.

“All this is the projection of sixteen archetypal figures: the sixteen figures of the Oracle of Fa, itself derived from the ancient geomancy.” (source)Leo Frobenius, Kabyle Tales

Although I have a deep feeling for the F note, particularly the F#, I must say that the Oracle of Fa does not refer to the music note called fa in French or F in English. 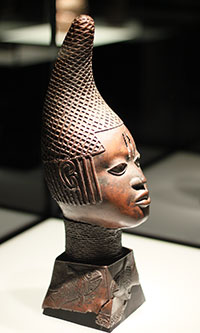 The Oracle refers to the goddess Fa or Ifa, one of the sixteen Yoruba deities. Fa governs clairvoyance and divination through a ritual that is still practiced. The other deities of Yorubas remind of the Greek, Etruscan and Aztec gods : Uranus is Obatalla, the god of heaven; Hephaestus is Ogun ; Ifa is Athena, protector of human race; Poseidon is Olokun, god of the sea; Zeus is Shango, god of lightning, with his unique destiny: Shango hanged himself. Come on! Aren’t the Yoruba gods immortal? Probably not. God Shango hanged himself, then he left this reality level to live his death, as the good spirit he was.

Where is the problem? The gods are men like us. The Yoruba country knows the loas sorcerers and zombies: voodoo and macumba come from this country. Here everyone is dedicated to one of the sixteen deities, according to his date of birth. All life through, he’ll worship his tutelary deity. But there is no caste or clan system, as the different children in a family may be linked to different deities.

In this specific case, tradition is not a social obstacle, but an asset. Anyone can enrich the family with own inner wealth, from own tradition.

It is the central orixá of the Brazilian Candomblé, which is found in voodoo under the name of Papa Legba or Exou, Esou, Exu, Bara, Legba, Elegbara, Eleggoua, Alouvaiá, Bombo, Njila, Pambou, Njila. It is found in Benin and in the ancient kingdom of Dahomey in Ondo, Ilesa, Ijebu, Abeokuta, Ekiti, Lagos. (source)

The Etruscans, for the little we know, followed a similar religion. Should we see here a true astrological religion based on sixteen signs instead of twelve? In any case, it is certainly a memory of Atlantis, homeland of the Etruscans and the Yorubas.

Here is another track: wouldn’t the sixteen divisions of the sky show that the Yoruba gods came from the sea? If there is a place where it is important to divide the horizon into sixteen directions, it is definitely the wide ocean. From time immemorial, sailors have included wind rose on their marine maps, which is their strongest ally in the liquid desert, the compass rose. The sixteen directions of the sky mean that Yoruba gods were high seas’ sailors, to whom the direction was very important. 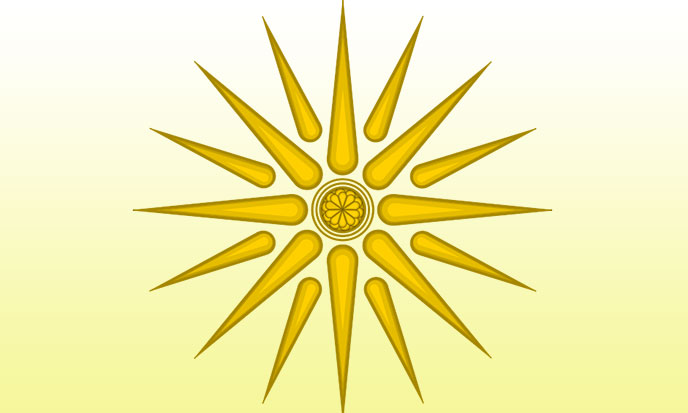 The Vergina Sun — also known as the Star of Vergina, Macedonian star, or Argead Star — is the name given to a symbol of a stylised star or sun with sixteen rays. It was unearthed in 1977 during excavations in Vergina, in the northern Greek region of Macedonia, by archaeologist Manolis Andronikos. He discovered it on a golden larnax in the tombs of the kings of the ancient kingdom of Macedon. “A larnax (plural larnakes) is a type of small closed coffin, box or “ash-chest” often used as a container for human remains in ancient Macedonia”  (source)wikipedia

Most probably these high sea sailors were coming from the other side of the Atlantic, some 9,000 years ago. This could explain many cultural similarities that can be found between the two shores of the South Atlantic. Other authors have highlighted the existence of a maritime tradition in West Africa during the early history, these include Harry Bourne, who also quotes Paul Johnstone (Seacraft Prehistory, 1980) and McGrail (ib . & The Boats of Ancient Northwest Europe, 1987).

As for the Etruscans, their worship of the “sixteen divisions, sixteen deities” also accredits their transatlantic origin, like the Tuatha dé Danann. About the Etruscans, we do not know much, except that they were the initiators and civilizers of a nation of warriors who will become the powerful Roman Empire. 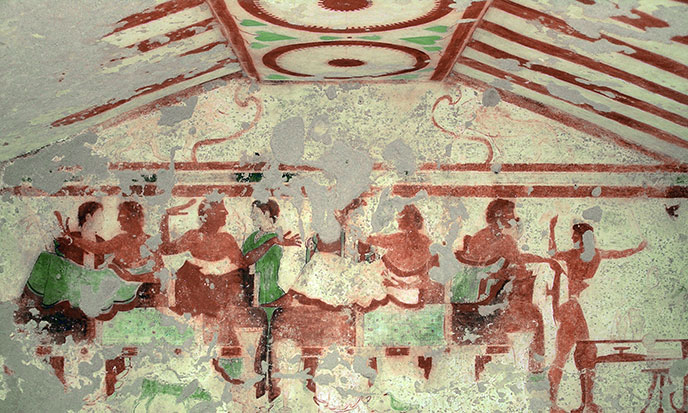 We also know that this people was made up of two ethnic groups, one black and one white, who lived in harmony as evidenced most Etruscan frescoes depicting daily life in Etruria.

And about the Tuatha, we know almost nothing except that they have played the same role of trainers for the Celts. Little by little, a new empire is formed on the ruins of another time.

To those who care about national identity and who would like to restore in the heart of every French the pride of inheriting a glorious past, we may suggest this track: by making the merging of the two currents that have made Europe, namely the Celtic tradition and the Roman law, the Gallo-Roman France illustrates at the same time the unification of two post-Atlantean traditions, those of the Tuatha and the Etruscans. Through the Celts and Romans, France is a distant descendant of Atlantis. Like Africa.

And like America … All of them united in a new triangular trade. For the best this time? Let us unite, let us be united on earth. Our alliances are our wealth. Our merger creates diversity, guarantee of renewal and growth. Do not be afraid of differences, by adding up they multiply their benefits. Only fear divides. 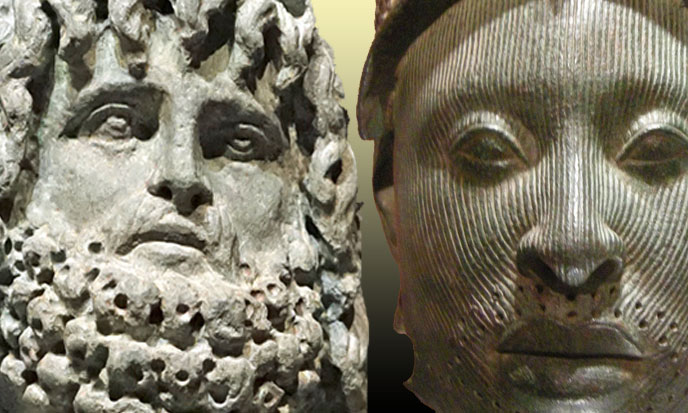