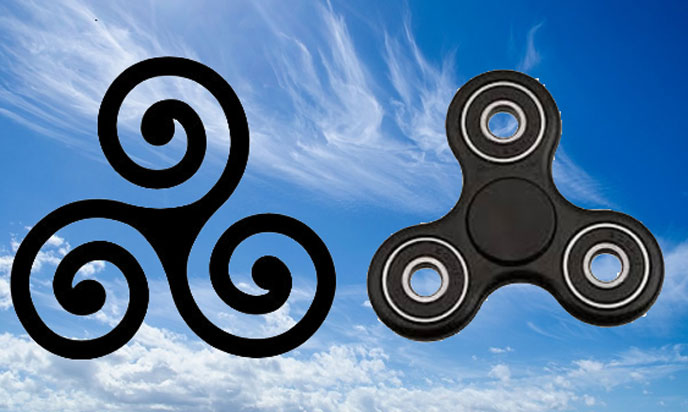 The reader has to wonder what it takes me to lump the Celtic triskell and the latest kid gadget together. At first sight, apart from the general form, these two things have nothing in common. Patience! You know that in the Saga of Eden, bigger surprises are yet to come.

Once again, ancient technology will show us the strange paths it has taken to be transmitted to us. That’s what it’s all about. How the original meaning was lost in transmission, and how it became symbol. A symbol is what remains when the original meaning is totally forgotten.

When a teacher who knows what he is talking about transmits his knowledge, it can not be ruled out that his pupil doesn’t take it. When a master who does not know what he is talking about passes on his ignorance, one can be sure that the pupil get it all right. And the ignorance remains. The handspinner turns, turns, turns. As in the Byrds’ song. A frenzy has taken hold this year of the launchers of fashion that are the toddlers, I played there too, struck by the analogy that was forming, inevitable, in my mind.

The ball bearings are very powerful, which explains the duration of the movement, and the three wheels are heavy enough to create a drive effect, not too much to not slow down the movement. Express meditation, with this stuff that fascinates kids by its fast spin and that does not seem to want to stop. Inward silence when contemplating such a beautiful approach to perpetual motion. 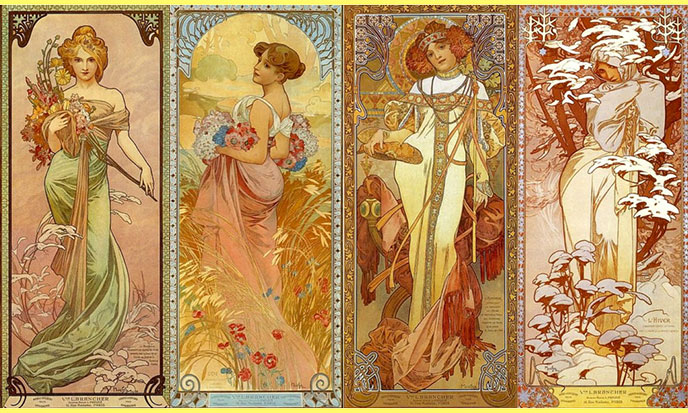 I have explained how the Celtic tripartition is a decline in relation to the Ramaic quadripartition, so I will not return here. I am interested here in the geometric figure of the triskell and the meaning that it gives to it. This handspinner that turns without stopping me evokes anything else: a perpetual motor. Do you see where I am coming from? The triskell is not a symbol, not at all. This is the pattern of a divine engine. Hence the fascination of the children, echoing that of their very distant ancestors.

We have already encountered the same case with the symbol of the Tao. It is not the abstract representation of the positive and the negative, nor the complementarity of the sexes, nor the daily alternation of light and shadow, nor any of the pretty fables we have been told. The Tao is not a symbol, nor a logo, nor anything hovering. It is not abstract, not at all, it is concrete. The Tao is the exact diagram of a polymetallic motor. Wait and see. You know that the tripartition is expressed by the triskell, and the quadripartition by the swastika. Usurped by the Nazis, the swastika is of Indo-European origin, specialists see it as a solar symbol. Not quite. It is the rotor that drives the engines of the terraformers, you know, those divine people who live above our heads in their planet-ship that shines like a thousand suns.

The Hyperboreans are called “sons of the sun” because they come from this brilliant star, their planet-vessel Hyperborea. They are considered to be gods, they are just technicians of terraforming. And the messages they have transmitted to us are anything but abstract. Here, the swastika or its variant triskell are not symbols, but truely real. They are rotors. They represent the moving part of an Atlantean motor, undoubtedly animated by a perpetual movement thanks to the skilful disposition of magnets and repulsive on the branches. 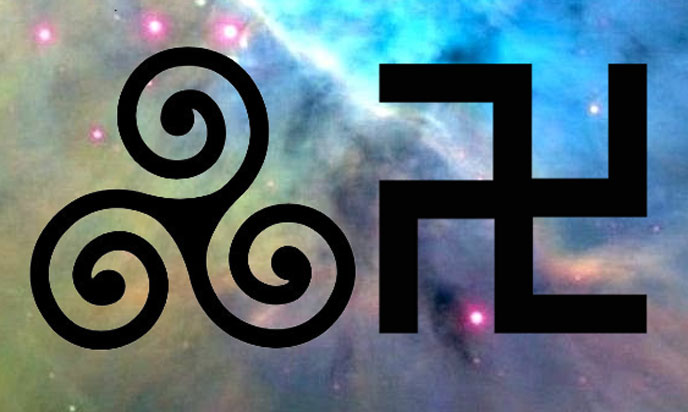 A reader told me this other figure, Disco Colgante, which also seems to be a rotor model, probably less simplified than the swastika or the triskell. But the principle remains the same. It is a system that relies on push pull waves, I know that starting is a sound device, a particular vibration of the chromatic scale. I also know that the rotor emits a soft whistle as it turns, and the more it accelerates the more the whistle rises in the highs. The volume of the whistling sound remains low, it is not disturbing. On the contrary, the sound is useful, since these devices are driven by the ear. It is a question of interpreting the modulations of the whistling.

Another thing: mercury may play the role of a fuel, or an oxidizer. We have seen that this precious metal, the lively silver of the antiques, was used in the vimanas and stored under the truncated pyramids which served as tracks for their craft, as at Teotihuacan. I know ingenious people and engineers who are going to look at this. If you find something, do not hesitate to tell me about it.