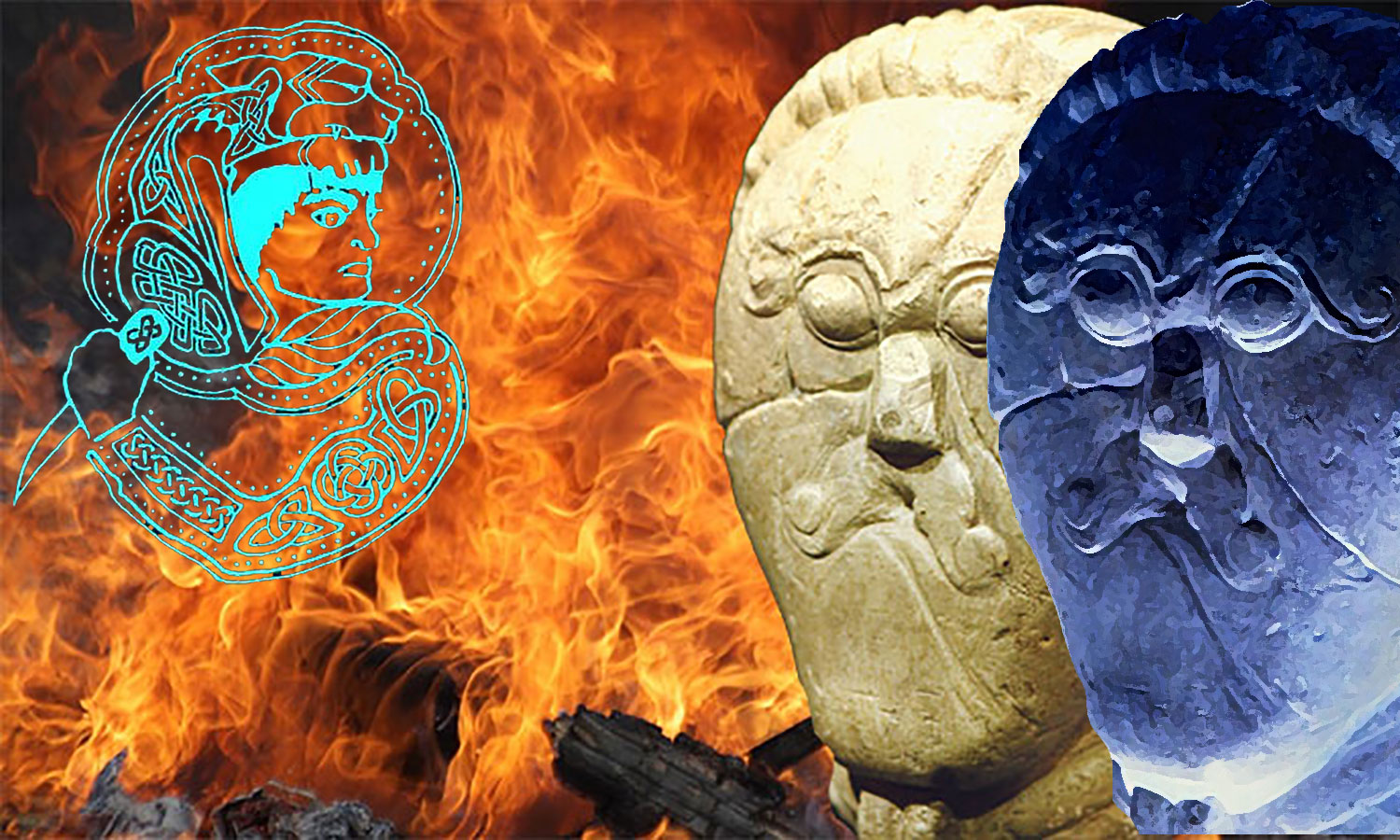 There are heroes who make children and adults dream, like Gilgamesh, Hercules or Prometheus. In Celtic mythology, Merlin and King Arthur, Percival, Gradlon the king of Ys, the fairy Melusine, the fairy Viviane … And the most fabulous of all, the giant Cuchùlainn. He enters the scene in the brightest of ways, at the age of 5, while still called Setanta, which means the way.

In the fortress of Emain Macha, also called the Castle of the Sins, a big party was given by the blacksmith Culann. For the tranquility of the guests and the good progress of the festivities, Culann posted his powerful mastiff at the gate of the fortress. Night falls when the young Setanta arrives at the Castle of Sins. Already an imposing size for his 5 years, the young giant is quick to walk, he has left his grandfather Cathbad who goes with him. Cathbad is a druid and a diviner who has raised the child since birth.

Like his grandfather, Setanta comes from the divine world, which the Celts call Sidhe or Island of the Four Masters. It is a mountain from which four rivers flow, separating the lands into four districts. This divine island hovers in the sky above the North Pole.

The young giant has just landed on earth, he knows nothing about this world yet. He is not suspicious of Culann’s dog, who rushes to him to tear him to pieces. A filthy slime covers the fangs of the animal and trickles on his rolled up chins. In his bloodshot eyes one can already read the death of the imprudent child.

It may seem dead, but the opposite is happening. Setanta is endowed with a prodigious force, his reflexes are quick, his gestures precise. In a jiffy he strangles the dog and sends him waltzing to the bottom of the ditch. The scene goes so fast that the animal has not had time to bite or scratch. When the grandfather arrives, the big dog is dead. Setanta did not give him a chance.

Son of Lugh, the god of light, and Dectire, a beautiful mortal, Setanta is not familiar with the customs and tricks of humans. It comes from the Four North Islands where lives a people of demi-gods, giants named Tuatha de Danaan, or Tuatha De Dana Ahn which means Those of Dana the Old, ie Dana the Great Goddess. For the Celtic tradition, these untraceable islands represent the other world, just like the Sidhe. In my opinion, it is in both cases the planet ship Nibiru or Hyperborea, with its central mountain and its four continents separated by large rivers. A spring was coming out of Eden to water the garden; and from there it was divided into four rivers, says the Bible. It is from the Eden of the Gods that she speaks. 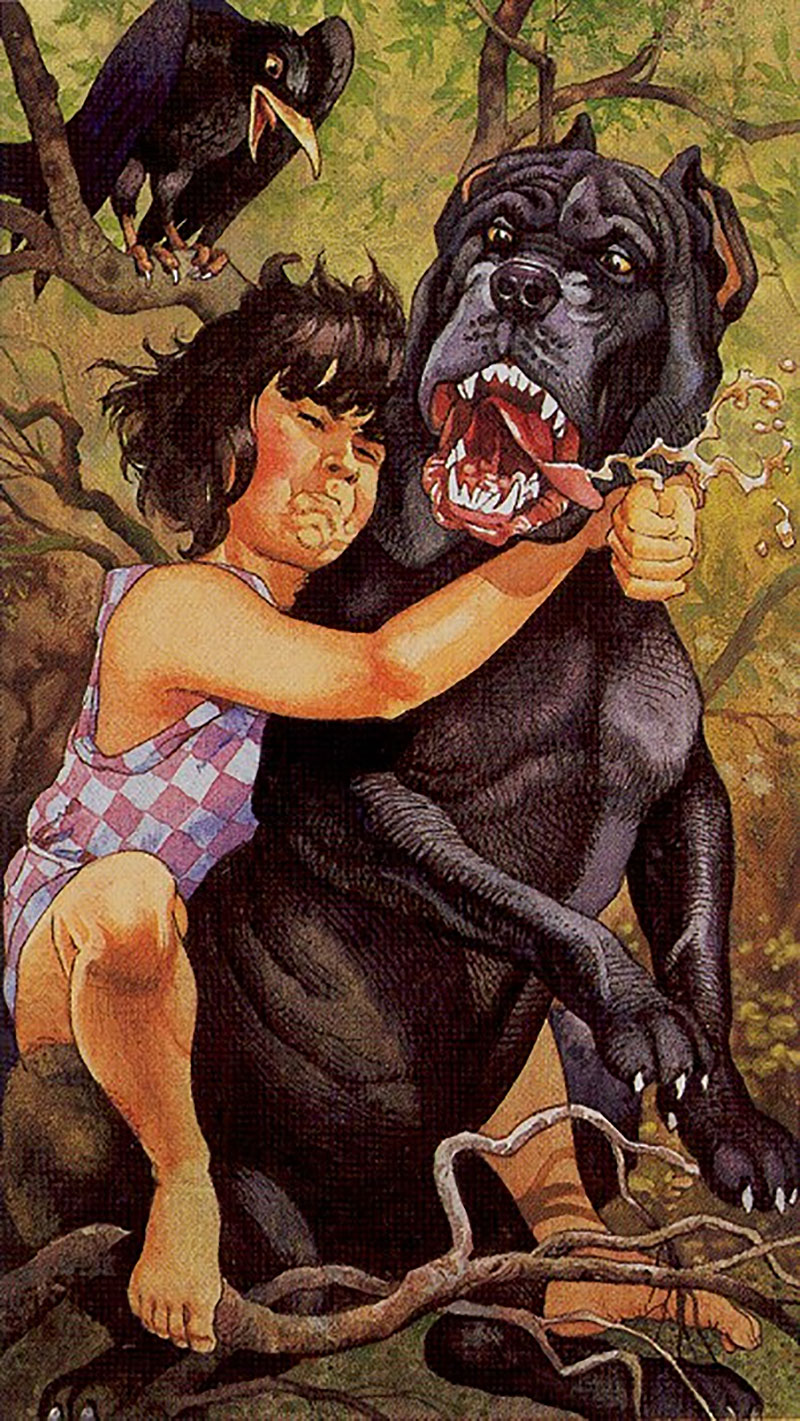 When he learns of the death of his dog, Culann is in a terrible rage.
– Cursed giant of the North,” he yells. Who will keep the fortress now? You, maybe?
– Yes, said the child. I will do it.
Setanta promises. He will replace the deceased dog. He will stand guard in his place. The blacksmith rolls terrible eyes. Setanta loses his way. So his grandfather intervenes. He imposes silence. In a loud and solemn voice, he declares that his protégé is no longer called Setanta, but Cùchulainn, which means “Culann’s dog” in old Gaelic.

Amazed by the young boy’s strength, the inhabitants intend to use the giant to destroy their enemies. Thus Cuchulainn settles at the Castle of the Sins. He grows up in strength and roughness. He is expected to perform feats. His grandfather Cathbad understands that the time has come. He declares that the stars ordered the departure of his grandson for the war. Alone, he can defeat the army of enemies. Good descent can not lie, so the young giant agrees. Cuchulainn is ready to go.

The first day, he kills two princes, his blood starts boiling. Warlike madness seizes his spirit. A red veil of blood blurs his sight. Too late. He must kill. So are the giants, objects of bloodthirsty impulses. Usually peaceful, good-natured, but when the first blood awakens their bloodthirsty instinct, they would kill father and mother. Two paths open before him: a path of light and a river of blood. Cuchulain chooses the blood river.

He returns his fury against those who have armed his arm. Conscious of having been manipulated, he returns to the Castle of the Sins to destroy it. To appease his fury, the besieged sent him three naked women. Disarmed, the giant fell in love with the most beautiful, Emer, the lily of Emain. The killer of men became as gentle as a lamb before the beautiful girl.

“Let’s marry them quickly” murmured the soothsayer Cathbad. “No one will marry my daughter if he is not first formed by Domhnall, the fencing master”, said the father of the young woman. Culann’s hound went to train with Domhnall, he learned all he could from him during three years. Having acquired the mastery of all weapons, he came back hopeful to ask the hand of Emer.

“Now you must train with Scathatch, the master in martial arts.” answered her father. Cuchulain calmed his rage and lowered his head. “I will go to Scathatch” he said. Three more years passed. Trained in martial arts, he returned to ask the hand of Emer, but once again, her father refused without even lowering the drawbridge.

Then Cùchulainn gave vent to his rage. Entering the fortress, he killed many fierce warriors. Terrified, Emer’s father killed himself. The lovers were finally married. Cùchulainn, the Hound of Culann, fought then against snakes he put into pieces and dragons he routed: since then, he wore the Serpent’s emblem. In those times of unrest and wars, Cùchulainn, Ulster’s Hound, defended his country alone. Faced with the invasion of Maeve from Connaught, he protected Ulster despite the pain of his injuries. 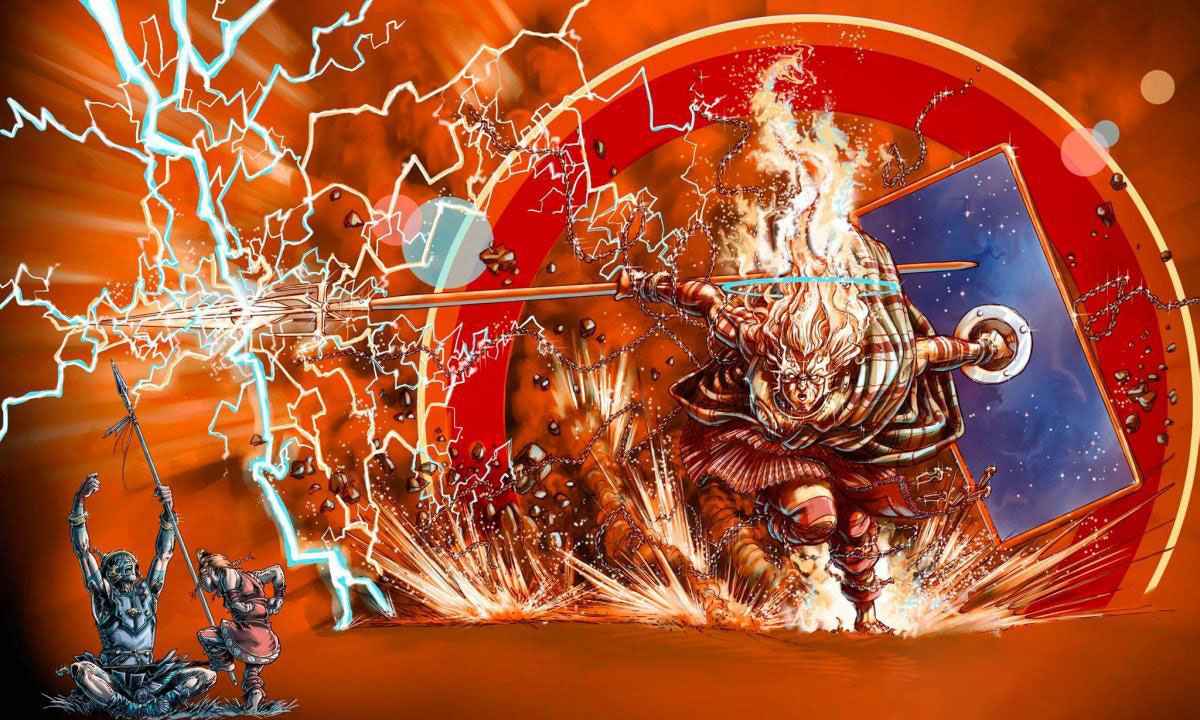 Cùchulainn is a tragic hero: with his trusty sword Caladin, he killed Ferdiad, his best friend, in the heat of the battle of Ford. In his last fight, he got pierced by a hostile javelin. His entrails hung from his torn belly. He staggered and collapsed near a lake where he drank copiously. Then he firmly fastened up to a raised stone. A crow hopped on his guts and drank his blood. Cùchulainn sent out a last laugh, ending in painful gasp.

On his feet he faced up to his enemies, on his feet he died. Already, he felt his end coming, but he still firmly kept his valiant sword Caladin.

For three days and three nights, the enemy was trembling in the bushes, not daring to approach him, tied to his stone like a pagan Christ, raising a threatening arm that was still holding Caladin. On the fourth day, an otter approached Cùchulainn. The otter sniffed his face and began to drink his blood. Whispered his enemies:

One by one, relieved, they left their burrows. The news spread. Life could return to normal …

This is the story of Cùchulainn, the mythical hero of Ulster. But I know another version …