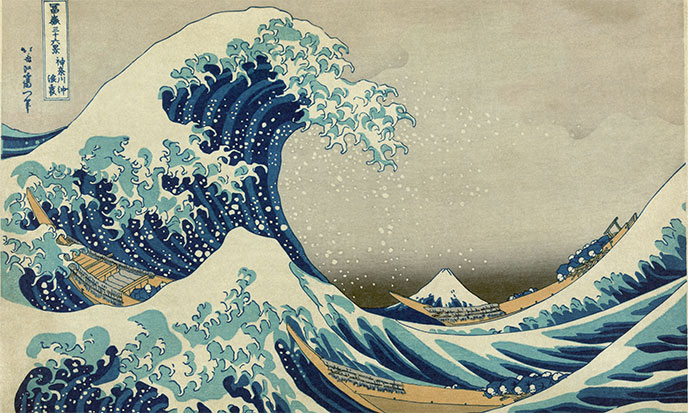 If more or less all traditions mention the huge wave of the great deluge, geologists are categorical: we find no trace of a universal flood in the past, however remote, of this planet.

On the other hand, there has been plenty of major floods and floods across an entire continent. It is true that there was not one deluge, for the reason I will give further.

Atlantic Ocean in 10,500 BCE, American and Celtic legends mention the incredible height of 2.5 miles. To survive, one must really be on the highest mountains… When the Earth of the Golden Age was grazed by a celestial body, it lost its balance, and snapped around. That provoked earthquakes and volcanic eruptions of unusual violence. And then we saw the wildest tide: the enormous mass of the world’s oceans, attracted by the gravity of the intruder, burst in the form of a mega- tsunami: a wave four thousand yards high, suspended between heaven and earth.

Thick clouds darkened the sky for months. The spindrifts were mingling with smokes from the craters. The sea water, sprayed by a thousand volcanoes, fell in furious torrents.

That is the thesis of Velikovsky. Yet, despite the support of Einstein, all of that is too Hollywoodian to be trusted.

At that time, geologists say, began a fabulous thaw. Ice dikes gave way, giving passage to the torrents of glacial lakes. Sea levels rose, causing countless tsunami when a dyke, natural or not, had to yield.

Here and there, all over the earth, disasters of this magnitude have marked the memory of peoples. The legend of Ys in Britain, the White City in the Channel, and many more are in these geological facts their distant origin.

And when the maelstrom calmed down, when the wave subsided, when the rivers had drained the lakes, the rain continued to fall for still a long time.

The last waves died, the last waters receded, the last drops stopped falling from the gray sky. But the sun remained hidden.

Then many eartquakes shook the earth’s crust, new faults formed many volcanoes, that spewed torrents of lava and covered the sky with thick clouds.

Was a nuclear winter preparing? Drying up puddles and mud, violent winds began to blow. Again and again. All around the world, so many storms have unleashed waves, lightning and hurricanes.

Billions of tons of dust thrown by caters or torn by tidal waves, darkened the sky for months, for years, for generations. Finally, when the long nuclear winter ended, when the sun reappeared, the breaking up flared up.

It was the end of the Ice Age. For the few survivors of these repeating apocalypses, a new world was emerging. Childbirth will be difficult. Mother Earth must first see her waters broken.

And for several millennia, the melting of glaciers will cause sea level rise of over 200 yards.

When at last the sun reappears, the debacle starts over again. Survivors shocked watch a new world being born.

Of their old life there remains only wavesto infinity. On the coasts of Western Europe, a few handfuls of survivors, deprived of everything, quickly return to the Stone Age.

No, this is not the version geologists. I have one, unbelievable, yet true. Me too I will take refuge behind Einstein who said, “Only the incredible is likely to be true.”

The deluge has not engulfed the island of Atlantis, because Atlantis was not an island but a giant spaceship. In loupant takeoff, this huge machine lifted the giant wave that struck the two shores of the Atlantic Ocean. Very Hollywoodian too, I confess, and yet it is true.

Later will come the giants of the northern islands, the famous Tuatha Dé Danaan, who will build the Second Atlantis. Its capital will be decorated with channels in memory of Peo, the capital of Atlantis. It will be built on the Dogger Bank, now engulfed too.

The Dogger Bank and the Western Empire submersion took place around 2500 BCE. It was caused by the departure of a second mother ship, Hyperborea, who had taken over from the mother ship Atlantis. Maybe the same?

True sages are those who give what they have, without meanness and without secret.