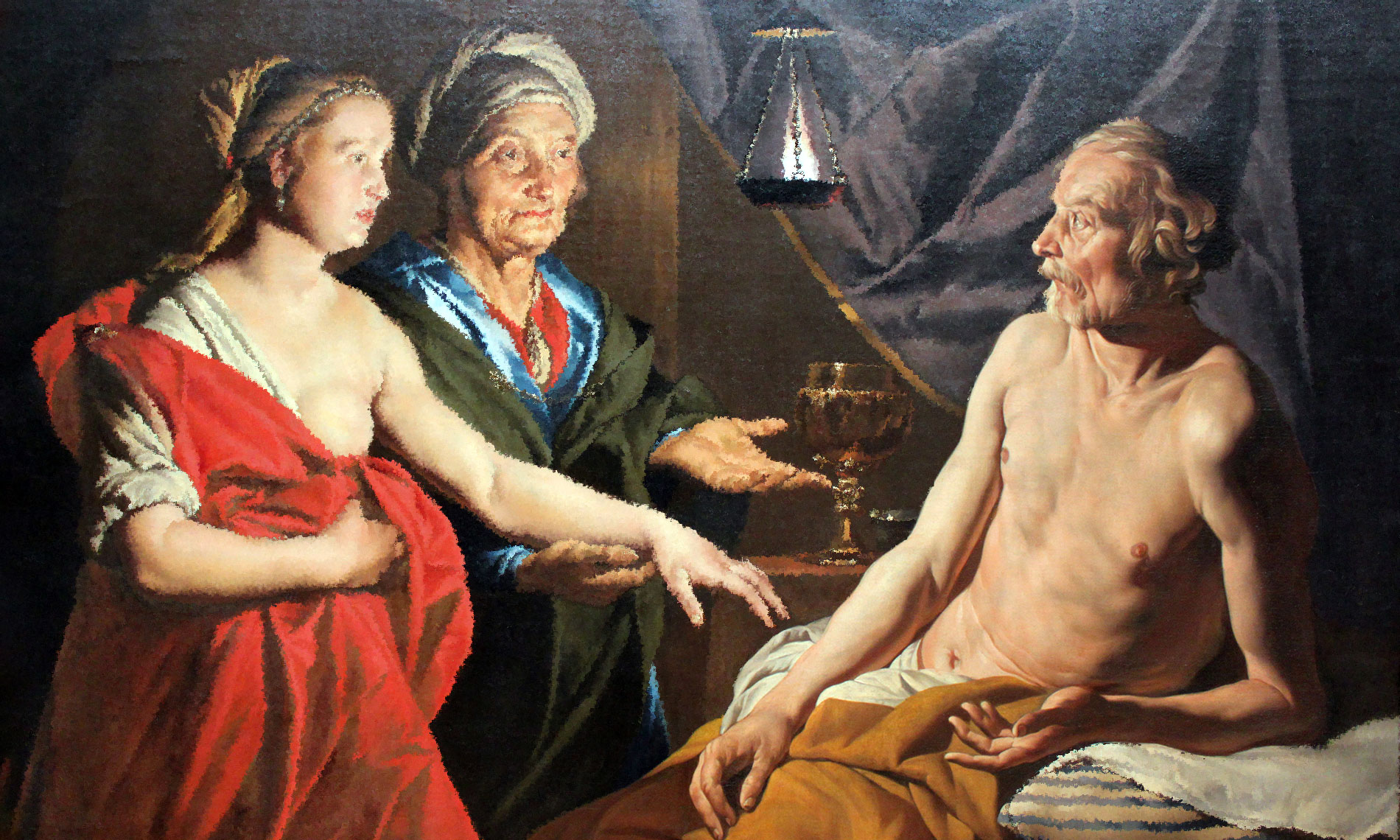 At the dawn of the Iron Age thrones tutelary figure of Abraham. He is the founding father of the three revealed monotheistic religions: Judaism, Christianity and Islam. Must patriarch, his adventures are well known … but are they well understood?

The Bible says Abraham is the son of Terah, who is the offspring of Shem and Noah. We know very little about his father Terah. In any case Abraham belongs to this great dynasty of biblical Patriarchs. Originally named Abram or Abrah in Hebrew, Abraham will receive this final name to the mature … past 90 years, says the Bible ! It is true that the patriarchs lived several centuries. Methuselah has almost reached the millennium. Ab Ram is a tribal name meaning “One-of-Ram”.

Such a name may be given only to a direct descendant of Ram. Native province of Ab Ram was called Aram, which means “land of Ram” and was inhabited by the Aramaeans. (source)Genesis XXIV Any crossword addict knows the birthplace of Abraham, Ur – defined as “a Chaldean city” in crosswords. Chaldea did not exist yet, far from it! (about ten centuries) At Abram’s time, Ur was the capital of Aram. Ur was the great city of Aramaeans, the local name of the People of Rama. The name of Ur is a corruption of Aar, which is used for A-Ra or A-Ram.

In his long march towards distant India, Ram has stopped in Aram a few decades earlier, he founded a population settlement there -why not the city of Ur itself?- and to give the good example of populating, he knew an Aramaean girl who became the mother of Abraham. But the Hebrew tradition has preserved a distorted name, that is why Terah replaced Ra who is unnamed in the Bible. Abram, the little bastard of Ram the Northern Aries -or of Ra the God of Sun- Rama the pale golden hair giant with a shiny skin and glowing face so that no one can look up at him.

Coming from the Celtic and Norse mythologies, this portrait evokes point by point another, taken from the Hebrew mythology, that of resplendent Yahveh in long white hair, Yahveh whose face shines so brightly that Moses can not look up at him. If Ram and Yahweh are not one, they do look like. They belong in any case the same family, they might be called resplendent. The ancient white gods who civilized the ancient America radiated also this bright light. 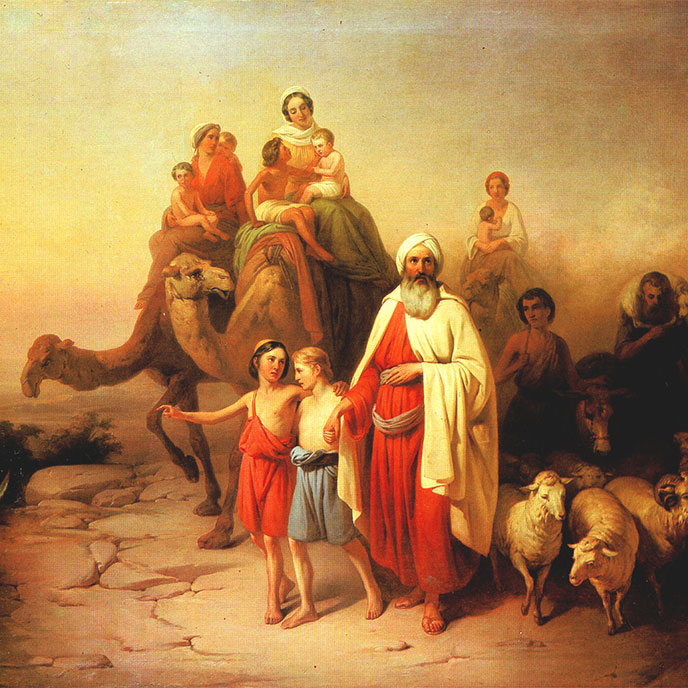 Get on our reading of Genesis and the adventures of Abraham with this point of view. Ram is the father of a bright kid in whom Ram is interested in the highest degree: young Abram. Ram never leaves him long. Do not forget that Rama moves in his flying machine, Vimana or Pushpaka type. He can fly over great distance in a few moments, so, at the height of his reign, he was able to administer an empire that stretched from Central Europe and Minor Asia to India, Sri Lanka and Tibet where Rama ended his existence.

This is why Abram ever sees his Lord Yahveh appearing in a dark cloud, or in a burning bush like Moses. But there is a more shocking episode. And a more revealing too. One day Yahveh directs Abram to go sacrifice his only son Isaac. As always terrified by apparitions of his father in his terrifying machine, Abram rushes to obey. At the last moment, Ram the North Aries pitying his son replaces his grand-son Isaac by … a ram, precisely. Then Ram / Yahveh decides to change the name of his beloved son.

Abram One-of-Ram will become Abraham. “because your descendants will make a crowd” adds Ram. He is just playing with words: in Hebrew, “crowd” says hamon and ham is the end of the word Abraham and the beginning of the word hamon. (source)Wikipedia This pun is in the Northern style, the style of Lugh, Ram and other Aesir. Note that it is formed by inclusion of the syllable ha in the middle of the word Abram: the pre-Celtic fashion, as in ancient Erin the syllable chu is included in Culann to make Cuchulainn.

In the same way, the name of Ra as father of Abraham was changed in Terah, or Next To Ra.

Last but not least: later Abraham intercedes with Yahveh to save Sodom, but Yahveh wants to screw up everything anyway … what he did by dropping an atomic bomb on the city. Who do you think this Yahveh is? Ra. Or Ram, yes, of course. We find the same atomic weapons in the Mahabharata, the paternity of the atomic bomb is even attributed to Shiva. These fearsome weapons of the ancient gods of India were lent to Rama as mentioned in the Ramayana.

The God of Abraham is his magic dad, Ram the Greant. Abraham would be the half-brother of Osiris, also son of Ra or Ram, chief god for the Egyptians, as Yahweh is for the Hebrews. 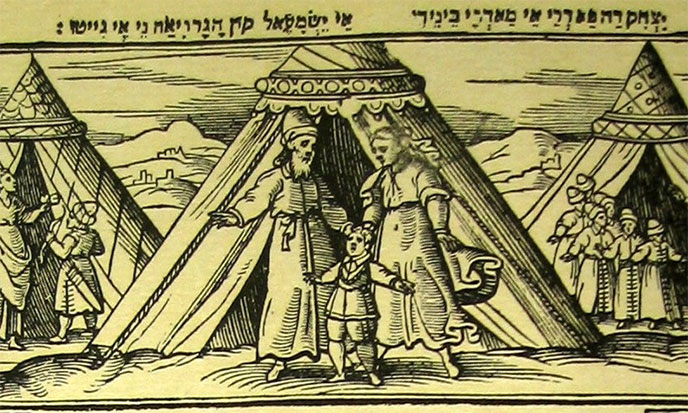 And that is not all. We can distinguish several levels of text corruption in the Bible version of the legend of Abraham. The name change is not the least. I guess it is a subsequent deformation, which we will see later why. Abram is too readable. Or, by all means, forever erased from western  memory. This allowed Asia, and first India, to confiscate this demigod like he was really born on Indian land.

Ram is Hyperborean, he was raised by the terraforming gods — these ancient astronauts whose mission was to develop this planet and to rough the dominant species, ie us, Homo sapiens. Ram was born on the mother ship hanging in stationary orbit over the North Pole. Technically, legally, it is not even earthling. Not by birth, much less with blood. How could it be Indian? 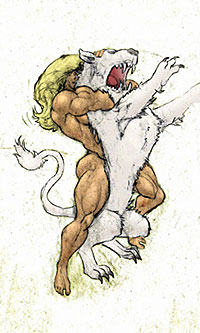 But the West was ordered to forgot. The terraforming gods have decided to remove his name from the European memory.

And yet, he grew up in Celtic land, where he was a young druid, he healed the sick by the dozens before becoming the warlord and leader of his clan in exodus across the world until Far East lands.

This required that his name was changed. Abram is too legible, Abraham is much less. It is no longer Ram we read, but Rahan, fierce ages hero.

“Thy name is no longer!” Sheikh Abdel Razek order to Olrik, arched on the sarcophagus treasure. Then Olrik lose memory, like we all did, he forgot.

When you’ll give up hope, I’ll teach you will.