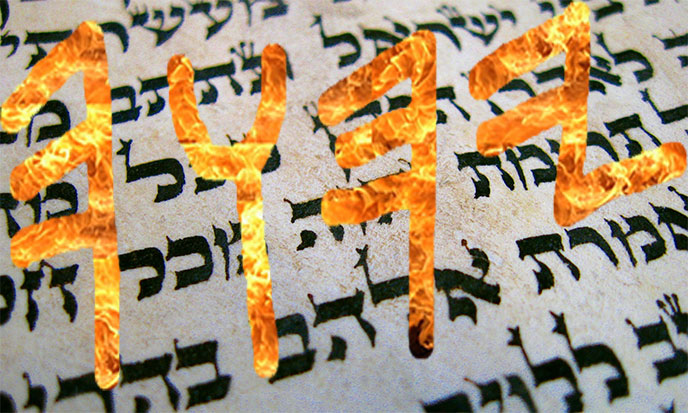 There is an ancient sound, two sacred syllables that seem universal. They are a reminder of the terrible space accident that is called the Flood or Deluge. All peoples have identified this sound with the name of the supreme deity, and were transcribed by the Hebrew YHVH, or rather Yod He Vau He.:.

Its pronunciation was to remain secret:
a powerful mystery is hidden inside.
We will track this very sound through its multiple cultures,
understanding where it came from, knowing what he sounded like.

For Velikovsky, the Deluge was caused by a giant comet that would brushed our planet and the very nearly dislocated. “The earth moaned. For weeks, all layers of the soil were shaken up, bent its orbit, moved its cardinal, precipitated its oceans on the continents, seas turned into desert, raised mountains, submerged islands, reversed course rivers – a world of lava, yawning abysses, shattered by meteorites, covered with burning naphtha, a soil constantly shaken by earthquakes, buried under a shroud of smoke and fumes “ (source)Immanuel Velikowsky, Worlds in Collision

The sudden move of the layers of soil, the erection of the mountains, earthquakes and rumbling volcanoes combined to create an infernal din. “Heaven and earth resound… the mountains and hills were moved,” says the MidrashHoly book of Judaism. “Very strongly scolded the heavens and the earth answered its echoes, “ said the Gilgamesh epic. This hero, the first king of men, was a master of lightning. In Hesiod “the huge earth groaned“ when Zeus with his lightning pierced Typhoon.

Distant China is no exception: its mythology describes the same phenomena. “The earth sounded very loud, and the wide sky above.” (source)Immanuel Velikowsky, Worlds in Collision Velikovsky the visionary tell us the real sound that was left for months in the bowels of the earth: “The great legislator of China, in whose reign occurred a terrible cataclysm that changed the order of nature, called Fang-Heun, but he was nicknamed the Emperor Yao, because of the noise of thunder that made the earth during his reign.” (source)Immanuel Velikowsky, Worlds in Collision

Immanuel Velikowski identifies so many customs and traditions referring to that particular sound, YAO, or Yahoo, always associated with the flood. “American Indians tell at a time when the sky was very close to the earth, mankind had gradually raised the sky, with repeated cries of “Yahoo” resounding all over the world. In Mexico, Yao, or Yaotl is the god of war. Indonesians have a custom of throwing an arrow at the sky shouting “Ju- ju Huwe.” The same sound is found in the Latin word Jo Jove, which means Jupiter that is the god of gods. The name of Yahweh is used in the Bible in abbreviated form Yahoo or Yo to denote divinity. Diodorus wrote that Moses received God’s laws invoked by the name of Iao.” (source)Immanuel Velikowsky, Worlds in Collision

Actually, it is not savage tribe, as remote as it is, with only the sound YAO encroe YAOU or the number of magical and sacred syllables. Views the tragic circumstances of its appearance, it is the god of darkness, anxiety, or infernal. It is curious to note that only the Hebrews, this sound is the unique and all-powerful God. As for the power of the sound, it is indisputable. But in the case of a single god, let me laugh the Hebrews are dozens, their only gods are so numerous that even the rabbis take foot in the prayer rug, which is Islamic. Over time, people have forgotten the original, but not the sound itself. The list is endless. Let us add a literary quotation.

Jonathan Swift was not a storyteller like the others: high initiate, with social and humanistic ideas far ahead of his time, and sources of traditional knowledge, which, although unknown, are nonetheless real. In his masterpiece, Gulliver’s Travels, published in 1726, Swift described “the two moons of Mars hundred and forty years before scientific discovery, and with this frightening precision: one of two satellites travel faster than the other. This was controlled in 1877.” In the same book, Gulliver goes through a strange adventure in the land of good and virtuous horses, the Houyhnhnms, who domesticated disgusting and obscene creatures, the Yahoos. Here we are. Yao, or ya-oo, these two phonemes are broken at will in all cultures and all religions. Even in Islam, whose appearance is very post-flood, but that has its roots in antiquity. Among the Sufis, the dervish call consists of two sacred syllables, Ya-hoo, as we explained in this story. Be aware, a priceless treasure is hidden inside.

A dervish was walking beside a river when he heard someone make the call dervish. He listened, the call came dervish on the other side. “Anyway, he said, this call is worthless because he mispronounce the sacred syllables. He said, ” Oo-ya-hoo” when it should say “ya-hoo.” Then the dervish wants to help his ignoring brother. He crosses the river by boat, greets his brother Sufi and tells the true sacred syllables. “Thank you,” said the other with humility. The dervish recrosses, very pleased with his good deed. Is it not said that the man who manages to correctly repeat the same mantra has the power to walk on water? Then he heard a hesitant Oo-ya, his brother repeated his old error. Suddenly the dervish jump: that his brother coming towards him walking on the river water. He approaches the amazed dervish and gently asked: “Brother dervish, I’m sorry to bother you but can you tell me again how we should pronounce this formula, because I can not remember.” (source)Dervish Tales, Idries Shah

According to Idries Shah, this story is taken from ancient Sufi texts. But the Yao series is not over, we could go months without exhausting the subject. Velikowski did, so I dispense. Last but not least : as everyone knows, “Yahoo” is a cry of joy in the USA, and the name of a competitor to Google. 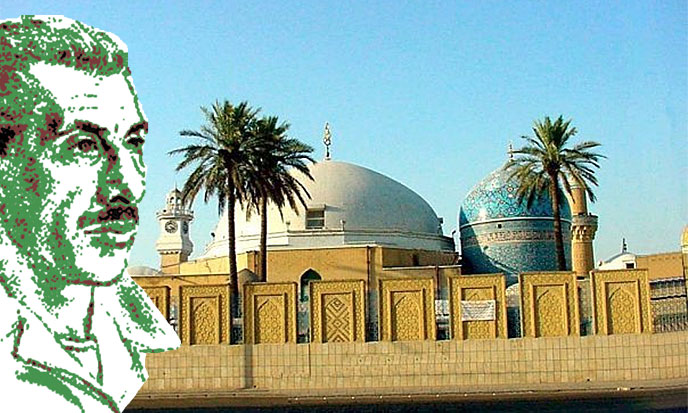 Surely all these legends are not the result of coincidences. Moreover, as everyone knows, the chance does not exist. This is just another name for fate. Should we assume that all the peoples take their traditions to the Memory of the World, the famous Akashic records? This is the simplest explanation, anyway. What adds Velikowsky about Emperor Yao is no less exciting: “The emperor sent scholars in different parts of China, and even to Indochina, to determine the position of the four cardinal points (…) He charged Astronomers discover its also the length of seasons, and to prepare a new schedule”

It could not be clearer: what need to check the compass points if the poles had not changed their position? Following the cataclysmic upheavals of the Flood, the cardinal points were not the same, implying that the poles had moved. Apparently, the Calendar had changed too, which implies a lengthening of the year, therefore a modification of the ellipse Earth. In ancient cultures, indeed, the year lasted 360 days, divided into twelve months of 30 days. Neat, clear and precise.

Everything properly stored, equal monthes, good accounts, such was the cosmic order. Following the upheaval caused by the global shock, the earth stretched out its elliptical orbit around the Sun and the year was 365 days. Woe! It was no more a nice round figure! A grain of sand had just slipped in celestial mechanics. So, to restore the Calendar’s order, the Romans kept the year of 360 days and twelve monthes of 30 days, to which they added five “calendar days” outside the legal time, period of license and free excess to the origin of our carnival. But back to our first emperor of China.

“The Emperor Yao instructed his astronomers to discover the length of seasons”… The ultimate consequence of the global shock, the seasons had emerged, implying that before the deluge the Earth’s axis was perpendicular to the ecliptic plane. I emited the hypothesis that the alternation of seasons is a direct consequence of the tilt of the Earth’s axis. This is also why it is said that Mount Olympus, ie home of Zeus, was placed in the custody of four nymphs, four sisters called Seasons.  It means that the reign of Zeus started with a new rythm of the year, ie four seasons.

Zeus is the new god after the flood, so it is under his reign that the seasons have appeared on earth, and men were struck. Such innovation could not remain unnoticed. Archaeology would make a leap forward when archaeologists will cease to regard our ancestors as ignorant and illiterate morons. On many points, their intelligence would leave them speechless. As regards the paranormal powers at their disposal, Geller and Girard would have had something to freak out. 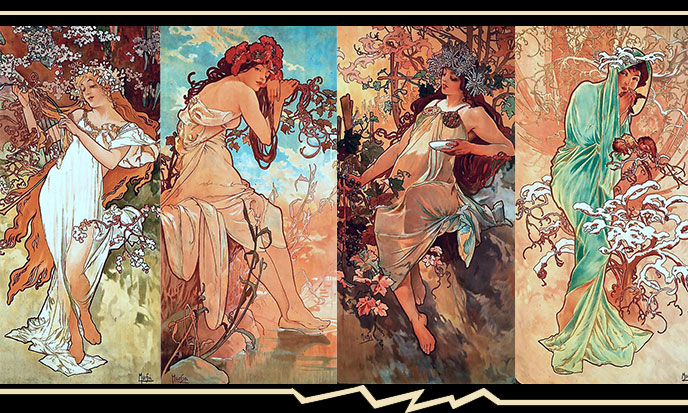 I can not close this page without adding my favorite touch, taken from the Language of Goslings. The YHVH sound may well be pronounced YV in French, because letter H does not pronounce. YV, that is to say Yves, still very venerated Breton saint, and for good reason. Yves, very anterior to present-day Christianity, is the Breton name of the great Mithras, called Esus in Gaul, and many other ways elsewhere. So ? What to conclude? Perhaps the god of the Jews is also the ancient god of Armor, Mithras / Yves, and his magic tree that heals everything, the yew.