The former gods, who have been terraforming our planet, are not immortal gods, contrary to what we were led to believe. They lived long enough for humans to believe them immortal. But the former gods are mortal, like all living beings. How didn’t we get it?

I ask again: how didn’t we understand that the so-called gods are mortal?

Mythologies are pretty discreet about it, and when they are explicit, historians pretend not to notice. Thus, in the Yoruba mythology in West Africa, we learn that a god was hanged. In Sumerian mythology, when it came to create the first Adam, Enki killed two gods to collect their blood. It is true that in Greek mythology -the best known- we do not speak of the death of the gods, who explicitly stated immortal.

Yet the details are wrong. How did Zeus call us humans? ephemeral.short life If he were immortal himself, he would have called us mortals. The gods enjoy a very great longevity, and we don’t, so we’re called ephemeral.

And there is more. Remember the Mecone sharing. Big eus  between men and Zeus, when Prometheus, our protector, Zeus plays his uncle a famous mischief. This was about meat, indeed. About the sharing of meat between men and gods. If the gods eat, they are alive, so mortals. The Assyrian tablets have taught us that the gods created the Adamsie humans because their angels were unable to grow vegetables. The gods eat, my friends. Hence the human sacrifices to feed them. The Giants also eat, see the ogres. They say they will come back. Think about it, you obese.

The gods are mortal. Zeus took the place of his father Cronos as Cronos did with his father Uranus. What is less known is that Zeus himself gave way to successor Dionysus. And in due time, Dionysus has left his throne to his successor Orpheus. 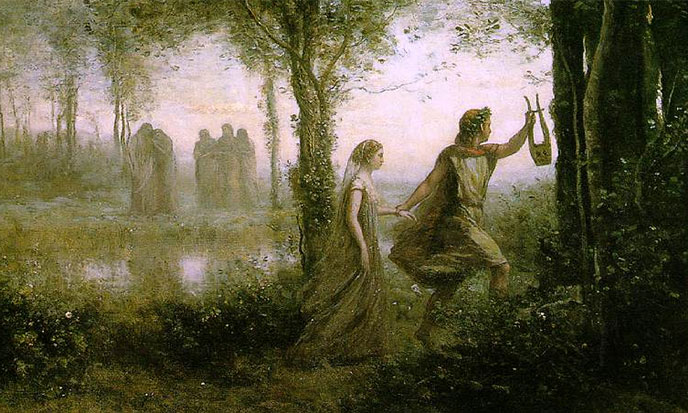 “Orpheus was a third-generation savior, identified with his divine father Dionysus as Dionysus was identified with his divine father Zeus. Seated on the Heavenly Fathers throne, brandishing his lightning-scepter, Dionysus was hailed as King of Kings and God of Gods. He was also the god-begotten, virgin-born Anointed One (Christos) whose mother seems to have been all three forms of the Triple Goddess: the earth mother, Persephone the underworld queen, Semele the moon-maiden. Hints of a hanging or crucifixion ceremony appeared in his sacrificial title Dendrites, “Young Man of the Tree.” He was also a Horned God, with such forms as bull, goat, and stag.

The legend of Orpheus, one of the most singular of Greek mythology, is related to the mystery religion and a sacred literature. Yet more often than not, Greek mythology presents him not as God, but as a demigod, or to use the vocabulary of the time, a hero.

Mythical bard of Thrace, Greece, Opheus knew with his lyre how to charm wildlife and managed to move inanimate beings. Apollo filled him with many poetical, musical and magical gifts : Orpheus is considered the inventor of the lyre.

Wandering hero, he participated in the Argonauts expedition. His song gives pace to oar strokes. His song also helps resist the siren song. Orpheus is a magician, sorcerer and trance master. He is also a great initiate, who went to Egypt to find enlightenment in the temple of Isis.

Orpheus love Eurydice, a Dryad. At their wedding, the bite of a snake kills the young bride who comes down to the realm of Hades.

Crazy in love with her, Orpheus managed to approach the underworld god Hades. First, his enchanting music sent to sleep Cerberus, the monstrous three-headed dog that guarded the hell entrance, with the terrible Eumenides. 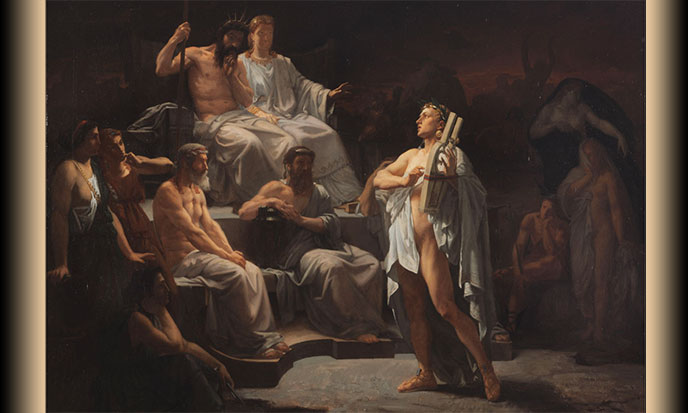 He managed, through his music, to coax and flex them, who allowed him to leave with his beloved on the condition that she follows him and he doesn’t turn around or speak to her until they both returned in the world of the living.

While Orpheus was getting out of the Underworld, he no longer heard the footsteps of his beloved. Looking forward to see and afraid that his love escapes him, he turned around, losing Eurydice forever.

Another version says that during the ascent of Hades, Orpheus reassures the presence of Eurydice behind him listening to the sound of her footsteps. Arrived in a place where there is dead silence, Orpheus fears that a great misfortune happened to Eurydice. Without further ado he decided to turn back and see her disappear immediately.

“Orpheus […] receives under this condition, he will not turn his eyes back until it is out of the valleys of Averno; otherwise, this favor will be rendered futile. […] They were not far apart, crossed the boundary of the tread surface of the earth; Orpheus, Eurydice will disappear trembling and eager to contemplate, turned, driven by love, eyes toward her; she immediately stepped back, and the unfortunate, stretching his arms, trying to be accepted by him, to hold him, grasps only the inconsistent air.”
(Source)Ovid, Metamorphoses, trans. GF-Flammarion, 2001

Orpheus appeared inconsolable. Around this myth was founded Orphism, current philosophical and religious-based initiation whose model is Orpheus descent in the Underworld. Orpheus sometimes was taken for the founder of the mysteries of Eleusis with Dionysus. Orpheus is considered since ancient times as a mage or a warlock.

Many traditions are circulating about his death. According to one of them, he was struck down by Zeus as punishment for revealing the divine mysteries to the humans he initiated. For Strabo, he would have died in a popular uprising.

“A legend was known in Thessaly about the tomb of Orpheus. A Dionysus oracle had predicted that if Orpheus ashes were exposed to light, a pig would ravage the city. The people laughed at this prediction. Yet the thing happened: during a riot, the sarcophagus of the poet was ripped out by a violent storm and soon the river flooded the city.  This river was called Sys, ie pig”… (source)

But this is to misunderstand the true identity of this poet. He was, in turn, the god of gods. He reigned on Olympus, after Dyonisos, after Prometheus, after Zeus.

Remember that the ancient Greek poets and philosophers are not the authors of mythological stories. They are only witnesses and their testimony is not entirely credible: ten thousand years had passed since the events the poets tell. Plenty of time to forget the details. While the Greek poets tell the world of the gods before the reality of their world, no electricity, no electronics, no flying machines, without Hyperborée without technological wonders formerly made by the ancient astronauts.