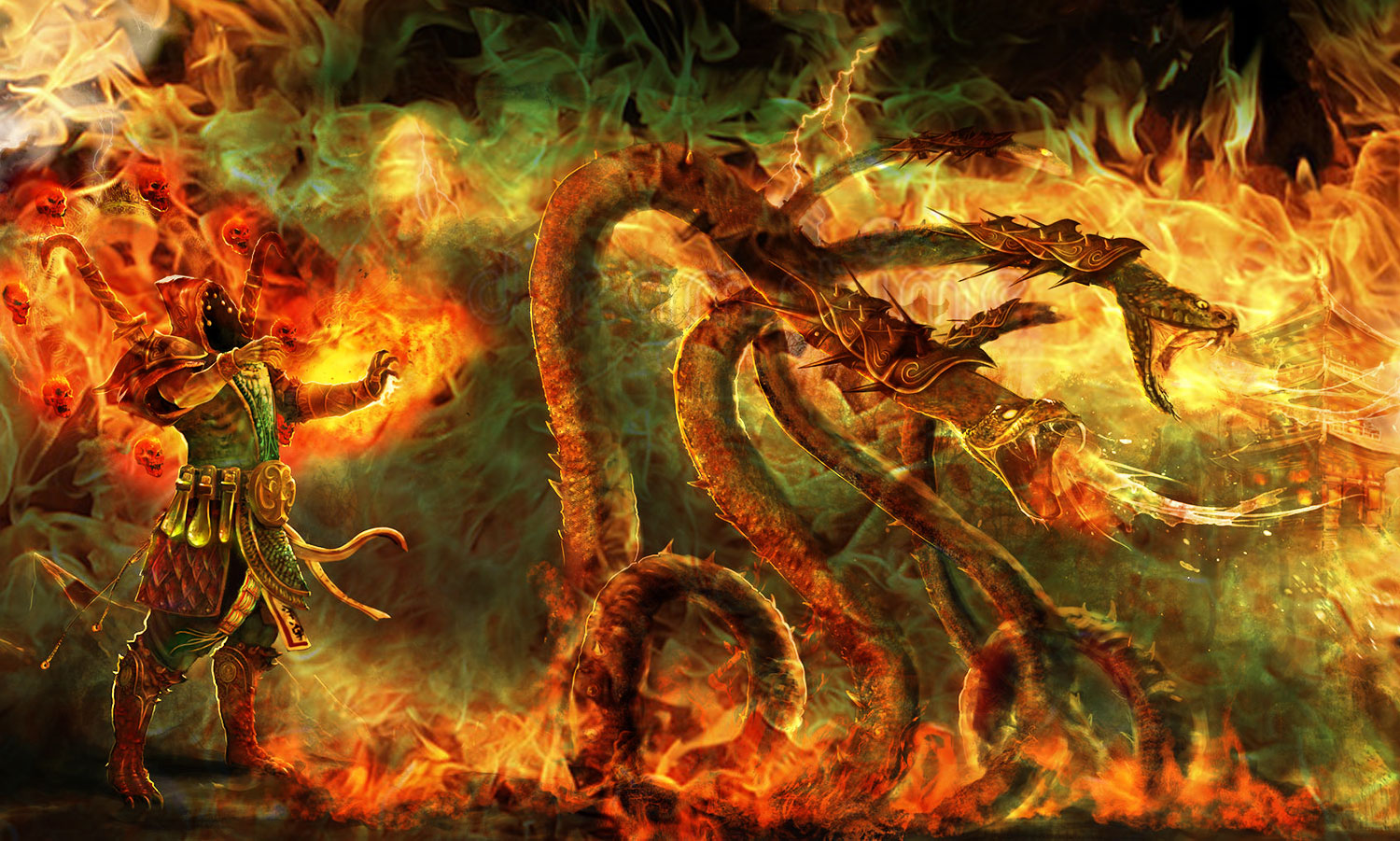 “For whom are these snakes whistling on our heads?” (source)Jean Racine, Andromaque Tempting Serpent of biblical genesis, Sumer’s Vulture Snakes, Feather Serpent of America, who is this Serpent People found in all the mythologies?

The first Chinese emperors, successors to the legendary Emperor Yao, said they were descended from dragons.

The Dogons of Mali claim that their extraordinary astronomical knowledge came to them from their ancestral reptilian celestial aspect, the “Nommos”.

The Egyptians had their god snake Kneph and the Pharaohs were often depicted with snakes.

The first altar of the Cyclops in Athens was dedicated to Ops, the god-snake.

The Phoenicians had Agathodaimonin Greek, the good genius, a serpent. The Hebrews have Nakhustan, the brazen serpent.

The cultures of Central America worshiped their creator god Quetzalcoatl, the winged serpent, as Baholinkonga, the feathered serpent of the Hopi Indians. Followers of Voodoo have a serpent god they call Damballah Wedo.

The ancient god of the British Isles, called Hu, was the master of the dragon world.

Indigenous Australians also have their myth of Wagyl, a God-Serpent. 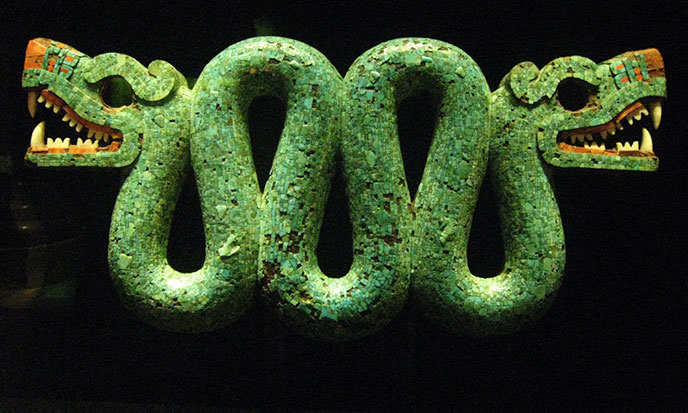 According to the Gnostics, the Snakes are our instructors, demiurges who shaped our bodies, but not our soul, which is not theirs, because it is uncreated. We are born from light, just like them. But our terrestrial vehicle, this triple body of flesh and spirit, we owe it to them.

“The Gnostic philosophy was born in the early Christian era within the Mediterranean basin, mainly in Egypt, heir of the ancient religion of Isis’ mysteries. To its followers, man is the emanation of the source of all things, and inherit a piece. See Notre père Prométhée of this creative perfection.” On the contrary, our triple body “has been shaped by harmful beings, usurpers who have proclaimed themselves ‘gods’, the famous Archons. Yahveh is regarded by the Gnostics as the chief of the Archons, the great demiurge, the most evil creature. In the 4th century, the confrontation between the Gnostics and the fathers of the Church was violent and merciless. Most of the Gnostic texts were destroyed before the discovery of Nag Hammadi’s famous scrolls in 1945, what was known about Gnosis was limited to the reviews of heresy hunters in the early days of Christianity.” (source)Karmaone and David Dennery, Nexus #63 p.38

Which is very unfortunate, because Jesus himself was Gnostic. Paradoxically: to save the religion of Christ, the fathers of the church had to invent a charming character they named Jesus. Before that, Christ, it was Emperor Constantine…

In the time of Jesus, Kali Yuga was only two thousand years old, now it is twice that age. Very little truth floats in an ocean of errors. Let us get back to those harmful beings who have shaped us, since this is the Gnostic view.

According to Anton Parks, there is also a mistake there. The gifted geneticists who made us were not as evil as it seemed at first. To Parks, the mother goddess is the sumerian goddess Tiamata.

That is she who deserves firstly the title of Primordial Serpent. Initially this term was positive because “the snake is the wisest among all the fields’ beasts” said the oldest version of the Torah, called the Septuagint. As for the Bible, it says quite the opposite: “the snake is the most cunning of all animals”. Thus the serpent is the ally of the men and the creator of the human race. He personifies the mother goddess Tiamata, assisted by her son Enki – called Osiris in Egypt, Oannes in Persia, and Prometheus in Greece. 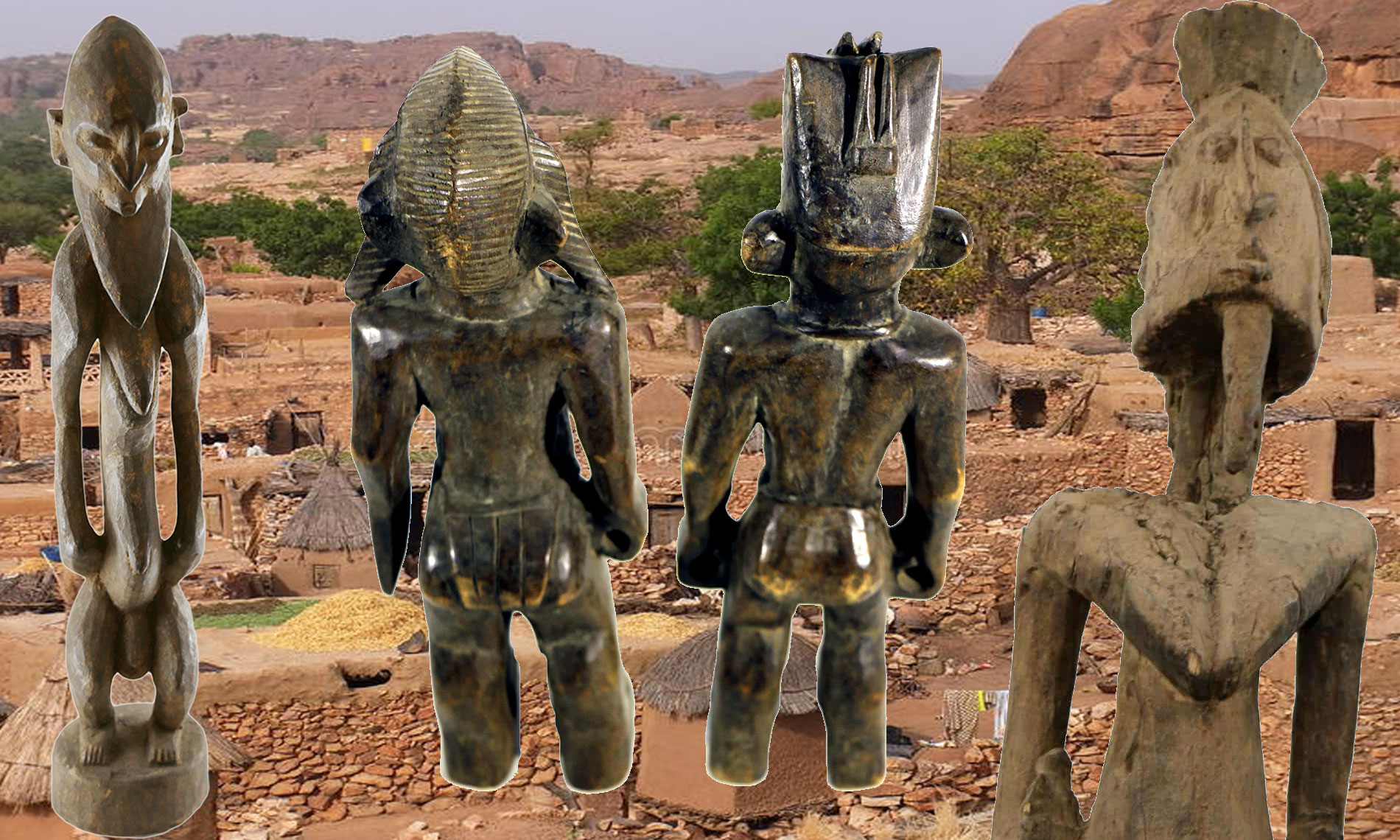 Among the Dogons, he is Nommo; among the Meso-Americans, he is Quetzalcoatl, and among the Hindus, Vishnu. He is the first instructor of our species, like the feathered serpent Quetzalcoatl, like the god-fishes Nommo, Oannes or Vishnu. He has always supported and defended men when other gods wanted to kill us, as our creator Prometheus siding with the men against his uncle, the powerful Zeus. Or again, as Osiris protecting us from Seth, who wanted our loss.

In the mythology of the Dogons of Mali, the Nommos are ancestral geniuses of the waters sometimes described as gods. Amphibians hermaphrodites resembling fish. (source)

The Devil and the Beast

Or as Enki protecting us from Enlil, who also wanted to end “the human experiment”. As we already understood, all these legends refer to a unique history, and their convergence support its veracity. So how come the Snake, our designer and our ally, the wisest of all animals, has become the most cunning, the most dangerous, the ‘beast’ identified to Satan in our ‘modern’ religions? According to the translators of the Nag Hammadi manuscripts, it is explained by a semantic shift.

Beast is the translation of quasi-homophones in Aramaic: haywa meaning stupid, hawa meaning to teach, and hawya meaning serpent. The gods geneticists work on human genotypes that the text calls modellings, “then the authorities called the Beast, so that she corrects the mistakes of their modellings”. The beast is not evil as she corrects the mistakes of the apprentice-sorcerers. “The true meaning of the Beast, is the Instructor, as she was thought wiser than everyone.” (source)Nag Hammadi NHC 118-25 to 30

Whether we like it or not, we are the children of the Beast. And it does not stop us from being born of Light. 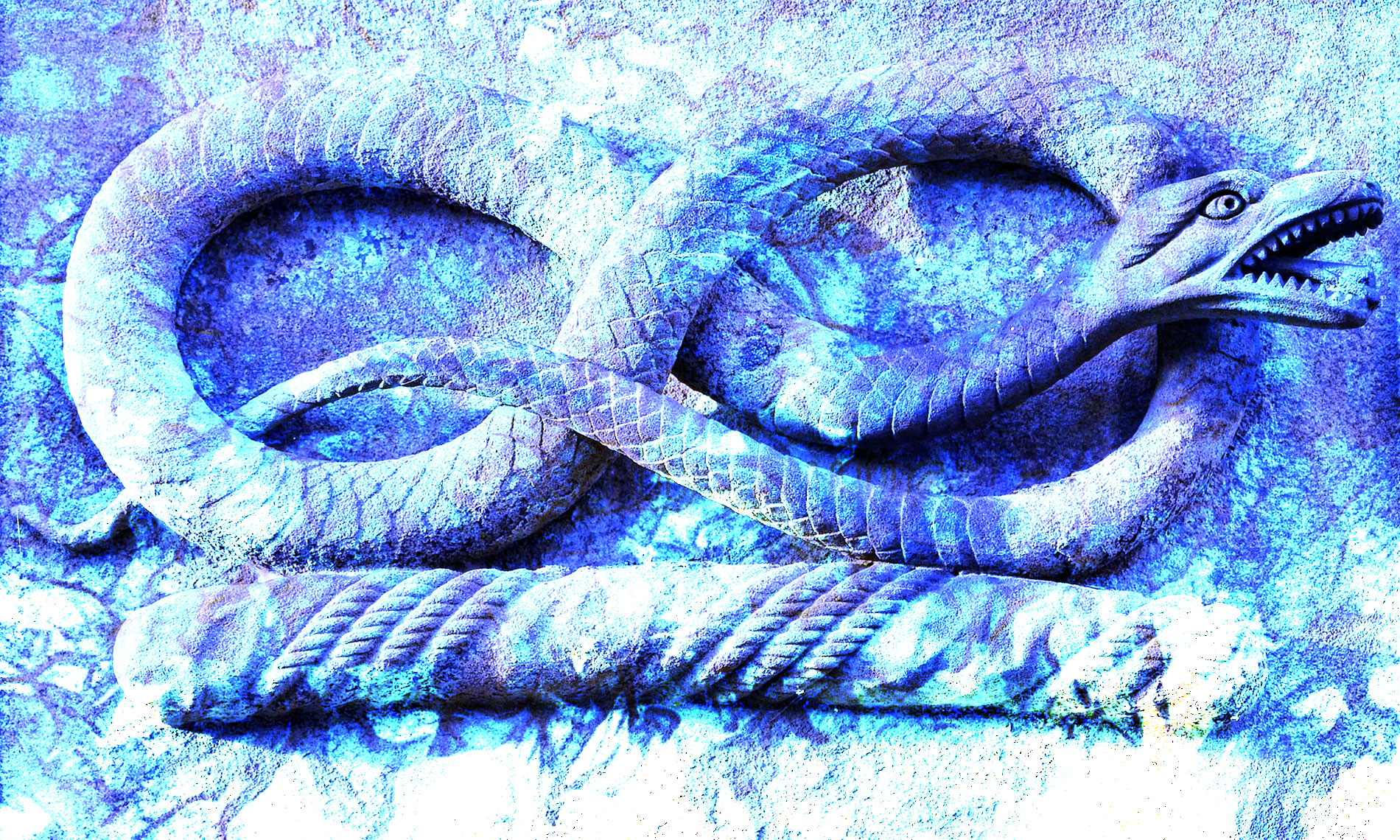 One of my favourite authors, R. A. Boulay, has written a magnificent book of dazzling clarity on this serious question of our origins: The Reptilian Past of Humanity. He is interested in the scriptures of Christianity and other Western sources to try to make us understand why the Beast and the Creator are two indissoluble aspects of divinity. I’ll give him the floor.

The former gods “resided in a temple, above a ziggurat: a pyramid with high floors above the plains. They were protected from the public and only a few trusted priests had access to them. In this place they ate in secret, surrounded by curtains, so that even the priests who were assisting could not see them. One wonders if their food was so atrocious that they had to hide even from their servants. Or was it even more sinister?

In the Old Testament, the obvious need for secrecy also existed. During the event known as the Exodus, the deity lived in a tent and was never seen. Moreover, she never ate in public. Specific instructions were given to Moses for the preparation of food that was left on the grill where the divinity was so that she could eat in secret.” (source)R A Boulay, Le passé reptilien de l’humanité, pp11 à 13

What do snakes feed on? Living creatures that they swallow round after having copiously stuffed them with their drool. If the former gods did the same, we understand the prohibition of seeing them eat. Not a very tasty show for mammals who cooked their food…

Or the gods hid in their palaces of precious canvases to devour refined dishes in divine porcelain and to stuff themselves with sweets until they burst their belly, when humans had to settle for a louse-fed filth in their bare hands. There is a double standard, both originally and now.

In the past, Tahiti had the beautiful name of Eimeo, which meant “eat hidden“. It is believed that the island still retained the memory of the serpent gods.

Humans were forbidden to see divinity. God said to Moses, “You cannot see my face, because man cannot see me and live.” And this prohibition of being seen by human beings is carried to the extreme everywhere in the Holy Scriptures. It even became an order not to make an image or a likeness of divinity.

So it is not only forbidden to see what his god looks like but even to make a picture of what he thinks he looks like. Why this taboo? Could its appearance be so foreign and repulsive that it had to be defended to man? One would logically suppose that if the divinities were so superior and great as indicated in the Holy Scriptures, they would be flattered and allow man to see and copy their magnificent beauty! 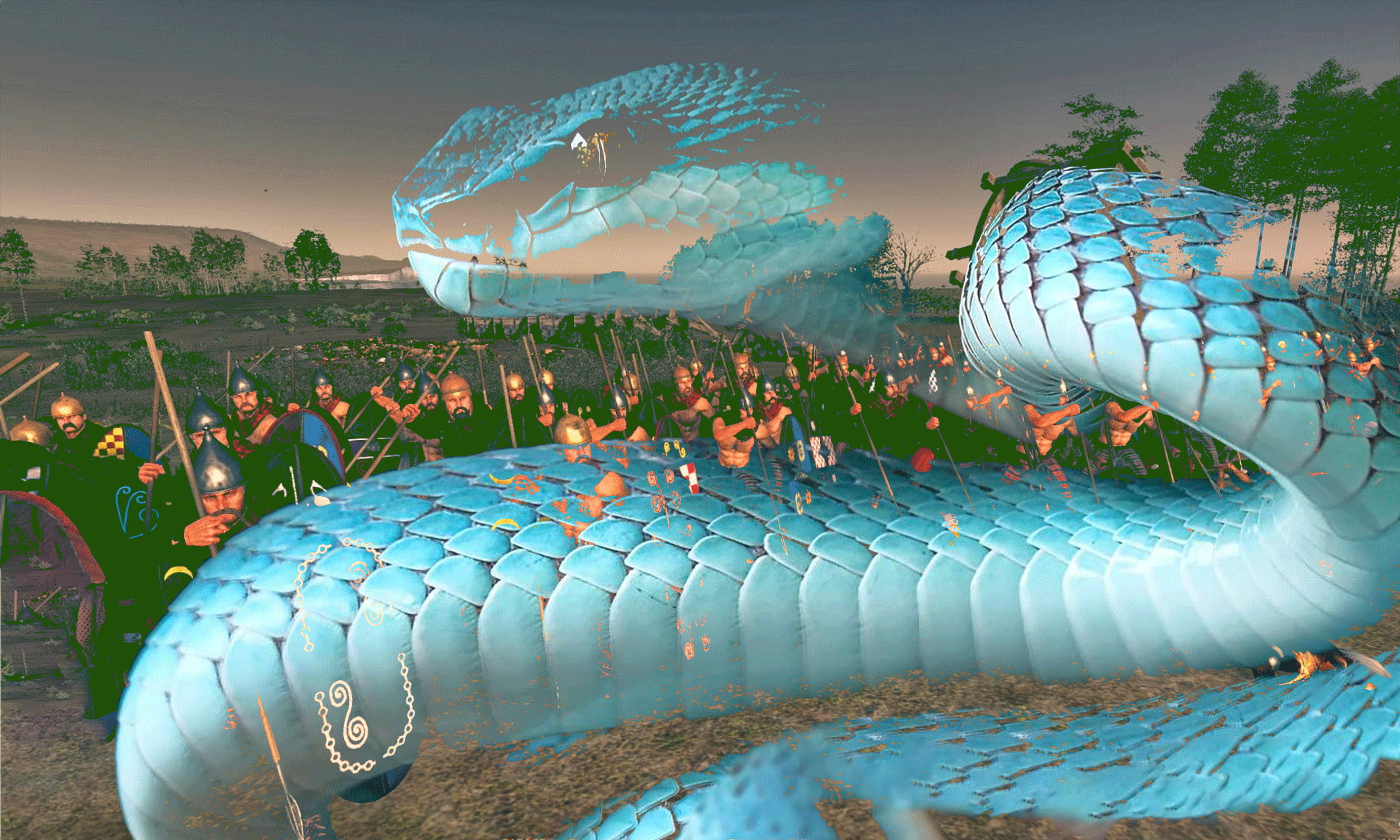 Only a few privileged individuals could approach the divinities, like the demigods, resulting from the mating of a divine and a human. They formed the aristocracy charged with providing for the gods and making a barrier between them and the human race. These demigods also had a rather strange appearance, having probably inherited reptilian characteristics. So Gilgamesh had a unique look that made him different from other men — his giant stature, of course — but not only.

The biblical patriarchs, demigods too, had an exceptional, taboo and shocking aspect, which explains the absurd behavior of Noah when his son saw him naked for the first time. (source)R A Boulay, Le passé reptilien de l’humanité, pp11 à 13

Noah plants a vineyard, then gets drunk with his wine and strips naked. His son Ham sees him naked and instead of covering him, he runs to warn his brothers. It is worth his son to be cursed. Why such a punishment? The nakedness of his father was taboo just like that of our creator. Reptilians are our ancestors, and their manly attributes were double like those of lizards, two penises bristling with darts that tear the flesh of their partner.

If Noah still possessed such sexual attributes, it is evident that Adam and Eve had in their flesh the mark of the Reptilians. In the Haggadah, the source of Jewish legends and oral traditions, it is revealed that Adam and Eve lost their “shiny, scaly skin” by eating the forbidden fruit. That could not be clearer.

The Gnostics, rivals of the early Christians, have a very close tradition. When Adam and Eve ate the forbidden fruit, they gained knowledge and insight and saw their creators with “bestial forms”. (source)R A Boulay, Le passé reptilien de l’humanité, pp11 à 13

I have another hypothesis for this episode. In my opinion, Adam and Eve mate after eating the apple. Eve was fertilized. For the first time, a human would give birth by natural means. Unforgivable fault in the eyes of the gods! Until then, they had given birth to human clones in their genetic labs and artificial matrix to be sure to reproduce only perfect copies of the first human types.

According to the tradition reported by Berossus — a Babylonian priest from the 3rd century BC — the human offspring could be traced back to Oannes, a marine creature from the Persian Gulf to teach humans the art of civilization. Fish or rather reptilian, Oannes was amphibious, capable of living under water as in the open air. For Berossus, creatures like Oannes are annedoti, ie disgusting. Or musarus, abomination. Babylonian tradition thus teaches that the foundation of civilization is due to an abominable and repulsive creature…

If it were a made-up tradition, it would rather glorify our masters by describing them as splendid gods or fascinating heroes. The fact that it does the opposite pleads for authenticity. The sad fact is that we have created God in our image and not the other way around. In this way, we have hidden the real identity of our creators.