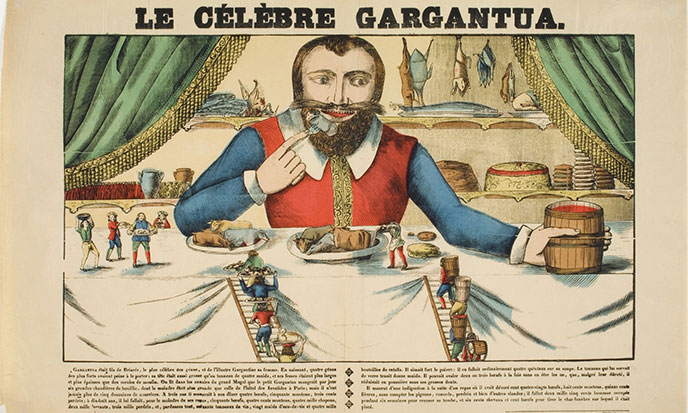 Were the fathers of our fathers giants? They probably had a gigantic spirit; their vast knowledge and great powers made them giants comparing with the dwarves we are. But they were also very large in size.

To write the adventures of Gargantua and Pantagruel, Rabelais was inspired by a popular legend of northern France, the legend of Gargantua and the Flanders Giants. This story is not unique: in Russia, Scandinavia, America, Australia, Dogon Yoruba or Inuit country, China, Japan, India or Middle-East, multiple sources tell the legendary adventures of the ancient giants. Where did these traditions came from?

“In the past, long before the story has been recounted, giants walked the earth.

They were the gardeners of the earth, those who come here to oversee the development of life on this planet. But this race of giants was not made for life on earth.

That’s why, through magical meansOr through genetics, the size of these beings declined to join that of humans, and thus they were able to mingle with them without being recognized as the gardeners.” (source)T. Lobsang Rampa, As It Was!

The Bible often involve giants: Nephilim were semi-divine beings. The King Og had an iron bed 6.7ft by 14: he would be at least 12ft tall. Goliath, the gigantic rival that King David brought down with his sling, was 9.2ft tall.

The Bible, ancient legends and grandmothers tales looks hardly convincing, some would say. Doubt is healthy, so I respect it.

If the ancient giants were imaginary, would they have left their mark everywhere on this planet?

A giant footprint called the “double footprint of god” can be seen in Ain Dara, Syria. The giant god would have been 7ft tall.

Here is the mystical giant footprint in Lepakshi, India. Other huge footprints can be found in South Africa, South America, Arabic countries … The giants were everywhere, sooner or later everyone will admit.

In Rome about 235, they said the Thracian Maximinus Caesar had a 8.6ft skeleton. A serious candidate to NBA! Greek mythology introduced three divine families: firstly, the Cyclops were elemental giants ; they mastered lightning and thunder. Then the Titans, divine giants, were the masters of life, creators of Man. Finally the Giants, divine bastards, were the masters of death and destruction.

Zeus inherited his mastery of lightning from the Cyclops. A Titan himself, Zeus can take any appearance – ie a giant or an animal.

Hindu mythology is introducing giants of all kinds. The best known are the devas, lower gods manifested in the guise of excessive beings. The heroes like Krishna or Arjuna -both demigods- could take at will the appearance of giants.

Celtic mythology also mentions a lot of giants. First of all are the legendary Tuatha De Danann, the people of goddess Dana. To the Celts of Ireland, the Tuatha were the builders of the megaliths, defeated by the Celts at the battle of Mag Tuired.

We owe a special award to the North American legends. “The Iroquois, the Osage, the Tuscaroras, the Hurons, the Omahas, and many other North American Indians all speak of giant men who once lived and roamed in the territories of their forefathers. All over what is now the U.S. are traditions of these ancient giants.” (source)

Hundreds of controversial discoveries resurface thanks to the internet join with the good work of amateur archaeologists -who are free to express their opinion when professionnal archaeologists are not. 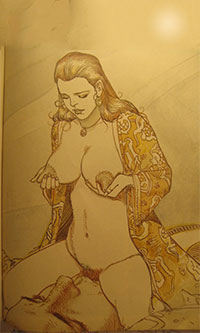 Off the California coast, ancient articles are many. Thousands of giant skeletons have been reported with blond or red hair streaks. The occupation dates more than 30,000 thousand years ago and would have ended there about 11,000 years ago. This story attracts the attention of tourists who visit the strange Ralph Glidden museum on Catalina Island …

In 1913 already, Dr. AW Furstenan – German naturalist – has taken hold of the case. He unearthed a 8 feet skeleton accompanied by different objects. People said that a giant of noble race formerly lived there and that he and his descendants had disappeared long before the white man arrived on the islands. The question is: how did the white men know?

In other regions of the USA, legends but also old press clippings mentionned similar discoveries of tall men or giants, and of red hair big sized tribes. Should we see the traces of the famous Tuatha de Danann and later Norse and Celtic giants?

The Sumerians too said that the first men were giants. So were the former gods.

A fairly common thing is showed in their paintings. They show tall and small people together. At first glance, except for a specialist, one doesn’t really matter the difference in size between the characters, because one thinks that the little characters are in the background, so they appear smaller.

This is definetely a modern way of thinking. In the ancient times, the laws of perspective were unknown, the first and the background did not differ in size. So what did it mean?

The little characters are menAnd not children, who would be all naked, and would not carry weapons. And the great ones are giants. Just compare them to the animals’ size.

In India, gigantic fossilized footprints has been honoured since the dawn of time. The fellow could cross a river in a single step. No seven-league boots for him! 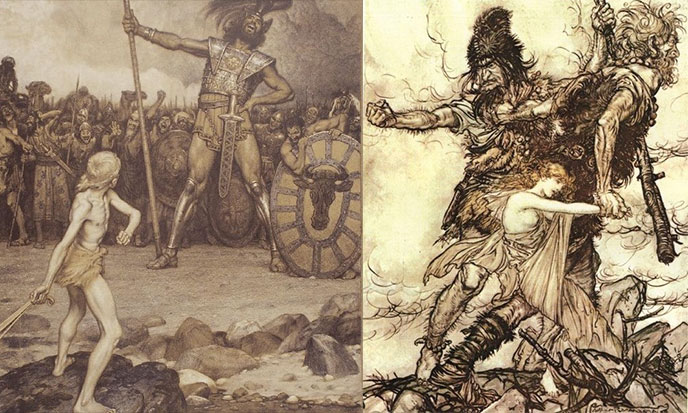 The Heart Of A Giant

The mummified heart of a Norse giant was discovered in Scandinavia. The inscription on the casket is written in old Norse runes and reads: “Behold! Within this casket lies the heart of the fierce and terrible giant known as Hrungnir, slain this day by Fafrd the Red whose bravery and cunning shall live forever!”

Unfortunately, no date was on the inscription. It is not known whether mummified heart tissues were examined by scientists to determine if it is indeed an oversized human heart.

Do not believe those who claim that the Giants did not exist under the pretext that they would have left no trace. Countless skeletons of giants were discovered long ago.

Over the centuries, many giant human fossils have been unearthed that scientists can no longer speak of singularities. But prestigious institutions such as the Smithsonian Institute, are strongly suspected of having destroyed the embarassing evidence … An impressive list of giants listed in the US is visible here.

A Nevada Indian legend mention the existence of 12 ft tall red-haired giants who lived in the area when the Indians first arrived. The story says the Native American had killed off the giants down in a cave. Excavations of guano in 1911 turned up this human jaw. Here it is compared to a casting of a normal man’s jawbone. In 1931 two skeletons were found in a lake bed. One was 8′ tall, the other just under 10′ tall. Have a look at this huge fossilized bone belonging to a gigantic humanoid.

Many tombs containing giants were uncovered there. Near Gargayan (Philippines), were found the bones of a giant who measured no less than 17 ft. His incisors were 2.75″ long and 1.9″ wide. Bones belonging to a 9 ft.  tall human have been discovered in Southeast China. Dr. Pei-Wen Chung, world-renowned paleontologist, said the remains date back 300,000 years.

In 1577, in the canton of Lucerne, Switzerland, an uprooted oak reveals a human skeleton over 20 ft. In 1613, near the castle of Chaumont (F) a nearly complete 26.3 ft skeleton was exhumed.

In 1879 a 8.7 ft human skeleton was recovered under a mound of stone, Brewersville (USA). (Source)Dinosaur, by Dr. Carl Baugh

From the human scale to that of the Carthaginian giants, giants’ fossils of all sizes have been identified until now.

The most incredible discovery took place near Carthage, when the city still existed 23 centuries ago: the diggers unearthed two 36 ft skeletons! 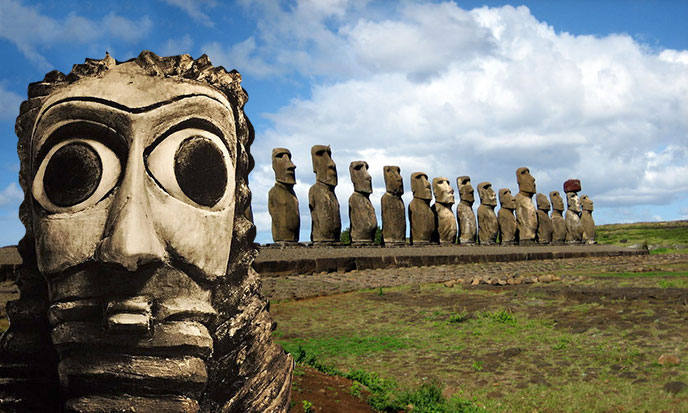 Near Agadir, Morocco, a prehistoric workshop tools was unearthed dated to 300,000 years. Among other things, there were two axes with a weight of 17.6 lb and grasping requires the hand of a giant at least 13 ft.” (source)Cremo and Thompson, Forbidden Archeology In Texas, the Valley of the Giants, Dr. CN Dougherty reports that they found “hundreds of dinosaur tracks of different species and in each case, they were accompanied by traces of giant human footprints.”

Not to mention the discovery near Valence (France) in 1456, a skeleton that measured more than 7 meters.

Even if the pictures are missing – and for good reason – the testimony of trustworthy people excludes any fake.

Another convincing trace: see delusional proportions of these flintstones. If they were cut to fit a hand, it should have been the hand of a jolly good giant.

We can judge from the tiny size of an adult hand, beside these gigantic prehistoric flint scrapers.

Dr Schoch and the giant footprint

Still in 2014, Dr Robert Schoch was pictured next to an imprint of giant (see picture below). The scene is in South Africa where a bunch of new archaelogists had a congress. The giant foot is 1m50 long. 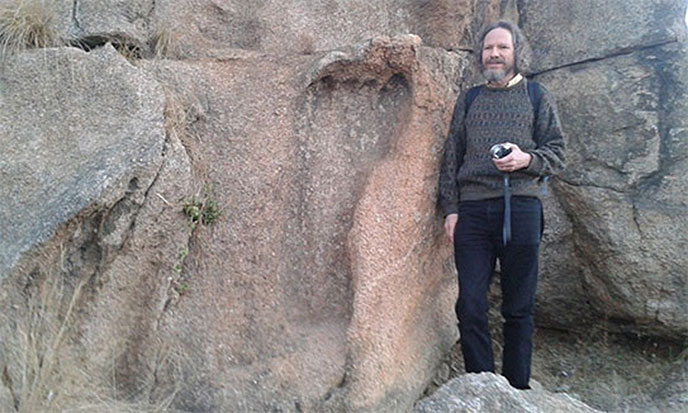 It means a twelve meters tall guy. Definitely not a hobbit! This giant footprint seems to give credence to both their presence on earth and their ability to soften stone, as may be judged.

In this photo, we see the detail of the print, realistic enough not to be a fake. However real, these footprints seem too huge for science interest.

The Giant Skulls of USA

Many giant skulls and skeletons have been found over centuries in Texas, USA. Hereare the references for those who want to check it out.

“Now thousands of skulls dug up with arrow points in them. A major archaeological discovery recently occurs in Kansas. The greatest prehistoric battle and burying ground yet discovered in the United States has just been found near the little town of Redlands, Kansas. It lies on the northern border of the Choctaw Indian reservation and near the Arkansas River.
Prof. Edwin Walters, the archaeologist who discovered it, states that from extensive excavations he has made he believes that nearly 100,000 warriors met death at that point and that the battle occurred 20,000 years ago. He goes a step further and declares the battle was fought between the mound builders and the Maya Toltec race, the latter coming from Yucatan and striving to wrest the Mississippi valley from the mound builders.
The skulls have narrow, retreating foreheads and projecting chins and the skeletons vary greatly in length, some seeming to be those of dwarfs and others of a giant race.(source)

The Giant Child of Peru

Down is a mummy skeleton of a giant toddler, found in Cuzco, Peru. “It is currently housed at the Ritos Andinos Museum, which is located far southeast of Lima. A hole in the mummy’s skull indicates that it had a fontanel, which is an area of connective tissue atop a baby’s head that later fills in with bone.

Like modern babies, the skull is larger than the rest of the body. But the strangest feature is that the skull is 20 inches long, which is larger than normal adult skulls. And it has molars that usually appears between approximately 13 and 19 months. So we are looking at a child under two years old with an enormous head.”  (source)

So what? The Giants once walked on this earth. If we do not find more trace of them, it is because we don’t look for them. Some traces do exist. Not much, because the giants came away from where they came: home, up in the stars.

Anything we don’t understand, we better get rid of. (The Smithsonian Institution)

More traces of the Giant people are found all around this planet. Don’t miss them!