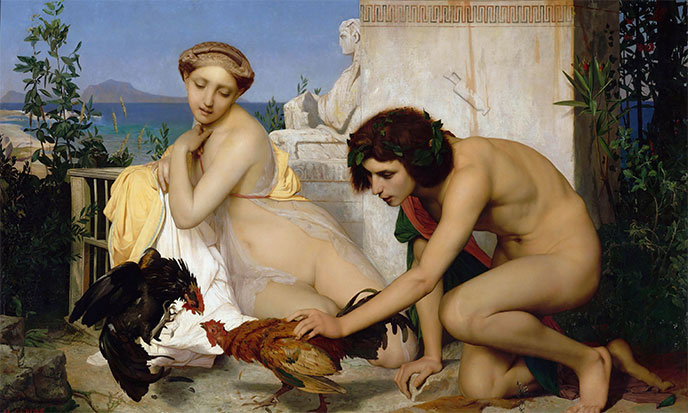 In the Greek mythology, the creation of humans is attributed to one of the sons of the Titan Iapetus, Prometheus, who shaped the human race with clay. Or rather, the fourth human race, which is still ours… as the ancient Greeks used to say.

Prometheus is chiefly known as the benefactor of mankind, as he started on deceiving God twice. In French, God is Dieu, coming from the Greek word Theos, which is … Zeus!

The meeting between gods and humans was in a city called Mekone. Humans have to provide the gods with food, particularly meat. This duty is the origin of sacrifices to deities. In order to determine what would be gods’ food and men’s food, Prometheus sacrified an ox, that he divided in two unequal parts: on one side, he put flesh and entrails, hidden under the animal’s unappetizing skin, on the other side, the bones, covered with a thick layer of good looking fat. Then he asked his cousin Zeus to take a portion.

This powerful god was tempted by the white fat, but when he saw that it covered only bones, he got in a terrible rage against Prometheus and the mortals.

To punish them, he refused to offer them the fire which would allow them to cook the delicious flesh attributed to them. Then the men complained to their protector, Prometheus, who decided to still do something for them.

Prometheus then ascended to heaven, where he stole seeds of fire that he hid in a stem of fennel.

This time, Zeus revenge was terrible. Prometheus is chained to the top of the Caucasus, where every day an eagle comes to devour his liver, constantly renewed, always pecked. This detail is important: the liver is an organ that pushes. How did the Greeks’ ancestors know this anatomical feature? Or have they learned from the Atlanteans? In any case Prometheus finds himself in crisis liver. The other gods spoke for Prometheus, but Zeus was inflexible. The punishment would have been endless if Hercules had not shot the eagle and released Prometheus from his ties.

So the case ended fairly: Prometheus was punished for helping men, it was fair that a man set him free. And the adage is true: gods need men. 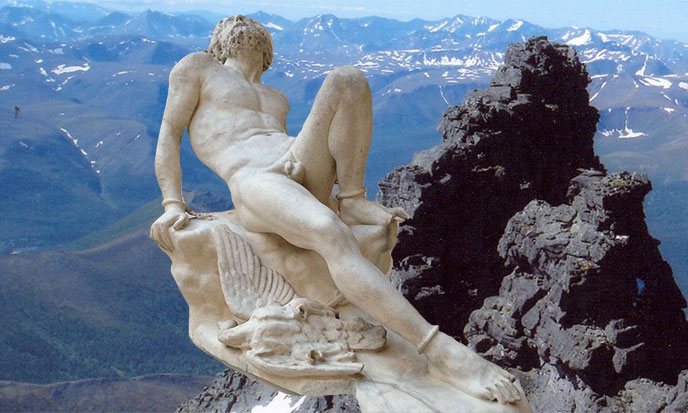 To punish men, Zeus started on inventing a « beautiful evil (…), terrible curse installed among mortal men », according to Hesiod. Then Zeus asked Hephaestus to create an unknown being, the first woman, to whom gods would give each one a quality,Except Hermes who gave her lie and who received for name Pandora, which means ‘gift of all gods’. Zeus offered her to Epimetheus, who was not very smart: his name means ‘the one who thinks afterwards’. Epimetheus did not suspect at all that it was a poisoned gift. And then… Remembering the Epimetheus lesson, let’s not think too late, and ask the right question.

And the right question is: if Pandora was the first woman, how did men reproduce before her? Hesiod evaded the question.

He spared the subject only two lines in his description of the golden race « when men came out of the earth », not as infants coming out of cabbages, but adult, fully equipped for fighting, like Athena coming fully armed out of Zeus’ head. Of course, we may admire the pictorial form of the mythical story, but we better look behind. Behind the image, through the looking-glass an incredible reality merges. We visualize some techniques of genetic reproduction. Zeus’ head represents the knowledge he had about human cloning, and if Athena came out fully armed, it means that she didn’t go through infant’s nor child’s life, but that she was born adult.

That way would be born the successive mankinds. By cloning. By laboratory’s genetics. If there is a hidden meaning in the universal myth of Flood and Noah, it could well be this one.

After the great cataclysm, survivors of the worldwide civilization produced a new mankind to rebuild everything, these mini-creaturesus are educated by their creators giants.

That fire Prometheus stole to gods to give men, what is its true nature? Is it used only to cook food? Or does it rather refer to an inner quality?

Zeus was the master of lightning, isn’t it the fire of enlightenment that Prometheus stole to him? Isn’t the stem of fennel an imitation of the divine thunderbolt which transforms man into a god? In another version of the myth, when Prometheus kneaded clay to create man, didn’t Athena intervene, seized with pity, to give this poor creature a soul, an opening to eternity? That Zeus’ fire Prometheus stole for us is the inner fire, the holy fire that lights its reflection in us, the fire of enlightenment, the heavenly fire, the roaring of thunder, the saviour lightning that Yi-King calls the Awakener, the Thunder.

Without him, we would be animals, like the Neanderthalians. This direct phone line with our inner god makes us luminous beings, cosmic and almighty. Sapiens sapiens = we should know it at last. But do we know it? No.

We have forgotten everything of our divine sonship; yet the seed exists. We are not Homo sapiens sapiens,Man who knows that he knows but Deus nesciens nesciensGod who ignores that he ignores … in fake latin!