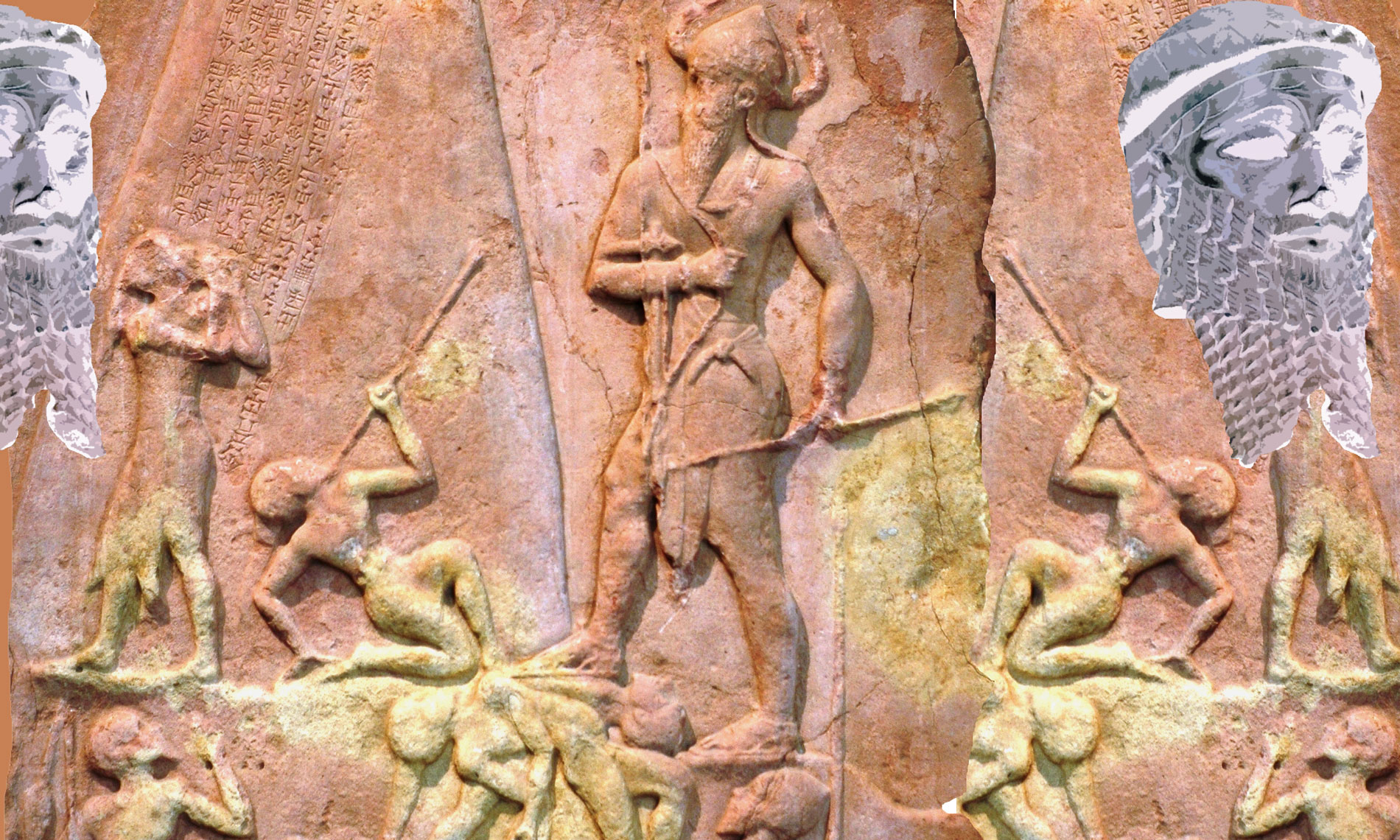 The trace of Rama is always hot. Its innumerable ramifications punctuate my path. From time to time some incident of course puts me back on its track. My recent readings brought me to meet an enigmatic personality who reigned over Akkad more than 4000 years ago. As often, the character came to life in my body and soul, he told me his story.

Naram-Sin or Naram-Suen is a king of Akkad who ruled from 2254 to 2218 BCE, or later to 2202-2166 BCE. Historians and archaeologists Jacque Pirenne and Leonard Wolley evoke a reign of 55 years extending from the year 2273 to the year 2218 BC. It restores the integrity of the empire and is proclaimed “king of the four regions”. (source)

That’s enough for me, I understood. Four regions, four lands, four northern islands, the four quarters of the ancient cities and Roman camps, separated by two cross streets, this is the exact plane of Hyperborea, Atlantis and all the terrestrial or celestial cities. designed and built by the gods before. This traditional division into four gave the word neighborhood.

This is what Flornoy calls functional quadripartition, responding to the functional tripartition described by Dumezil. And it is also the teaching of Rama the Hyperborean, whom he transmitted to ancient India and its four castes. In the western lands, there were four Druidic colleges, four provinces around a capital zone, generally situated in height, to imitate the sacred plan of Hyperborea with its four islands around Mount Olympus, residence of the higher gods.

Nanach-ram, to Rama. Like Ab-ram, from Rama. Naram-Sin is some kin of Rama, giant like him (about 4meter high, ie double sized). Or is Naram-Sin Rama himself? It is known that Rama ruled at the same time in many countries, around this time. It may be, therefore, that the historians’ uncertainty about the dates of his reign comes from the fact that he reigned over Akkad in dotted lines, sometimes present, sometimes far away, sending his orders at a distance from Egypt, Ethiopia, Europe or Asia.

Rama has conquered the eastern world as far as India, China and Tibet, which still honor him as the Lama, the first Buddha. It can be traced back to Korea, the Philippines and Japan. But it was of Hyperborean origin, that is to say extra-terrestrial. The West has forgotten its exploits, yet the Druid Ramos made his first steps in the Celtic land, before becoming warlord, charismatic leader and living god.

Naram-Sin came to see me. He did me the honor of his visit. His story resurrects the paradox of his reign. I give him the floor.

“I, Naram, from Ramos, Ra, Ram, Rama and Lama, the thousand-name emperor, I begin, having conquered the land of the Scythians and the Parthians, I set foot in Akkad, as always, in these ancient marches of the Empire. The order is easy to re-establish and is threatened by invaders, ambitious hooligans standing on the borders, watching for the opportunity to invade the kingdom and seize its lands.

I had to subdue the small rebels who were the law in Upper Mesopotamia and northern Syria. When I say they were small, it’s not contempt: all humans are small for me twice their size.

In any case, I treated them without any compassion. They deserved none. And then I wanted to show the candidates for the revolt that Akkad can not impose any law, except mine. Apparently the lesson was not enough for them. They took advantage of my distance to hit my capital.

I returned from Egypt where I held other affairs of the Empire. At that time, I had conquered two-thirds of land. I did not despair of uniting the entire planet under one government, where all people would obey one law. “

Now that you know the version of the mouth of his hero, you will be able to decode the text of an encyclopedia. You have become clairvoyant:

Naram-Sin was a great conqueror, although the chronology of his conquests is difficult to reconstruct. His reign is marked by expeditions in Upper Mesopotamia and northern Syria (…) it is possible that he is the first king of Akkad to firmly submit this region. Later traditions attribute victories over Anatolian kings to him. Naram-Sin also won victories over Elam and Marhashi and submitted Magan. (source)

“Because of my lineage, I do not like Enlil – we call him the Traitor, we are the sons of Enki, we share his love of humans, we never touched them. Except in case of disobedience. Enlil’s trops kill for the pleasure of killing, they have the cult of death. Like some devils, they are naked, red skin, with necklace of skulls. Their dance is a trance on the corpses of their victims.

But I must say I like Enlil. He is the main god here. If I want to avoid troubles, I have to pretend.”

It is under this reign that various reforms and constructions take place that reinforce the imperial character of the Akkad kingdom. According to tradition, Naram-Sin would not have worshiped Enlil, the greatest god of Lower Mesopotamia. Later generations condemned this event, which would have cast a curse on the king of Akkad and his successors, because it aroused the anger of the gods. In fact, it turns out that this king had the great temple of the god rebuilt. (source) 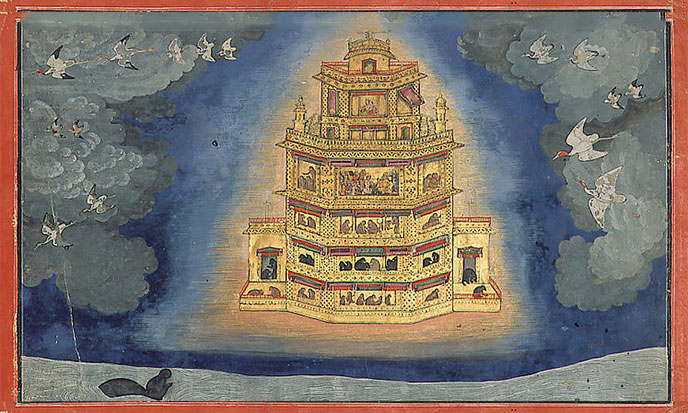 “Back in Akkad, I was mounting a larger army, a majority of infantrymen walking behind my vimanas, flying machines that my engineers from India had the secret.

These sky tanks are much more effective than the ancient horse-drawn battle tanks. The sudden appearance of my vimanas in the sky causes terror and disorder. They exert terrible ravages in the ranks of the enemy, as well as in the morale of the survivors.

My infantry have a nice game of slaughtering the survivors and burning their corpses. In addition to their usual weapons, I taught them how to handle the mortar, which is not a bow like any other. He does not throw an arrow. A metal blowgun brings out the invisible death that cuts the ranks of the attackers. I have formed special sections to manipulate these killers that they call the weapon.

In the air field, I also have troop transports. Great ships of the sky can carry my army from one end of the kingdom to the other in a few moments. Thus I was able to answer three simultaneous rebellions, and reduce all three in a few days. Once peace is restored, I am free to go back to Egypt, India or elsewhere, where the duties of my vast empire call me.”

The battle tanks seem to be losing importance to the infantry. The latter is equipped with lighter equipment than previously, which probably facilitates its mobility to the detriment of its protection. The basic armament consists of masses of weapons, daggers and spears as before, but also the bow that was previously absent military scenes.

The analysis of the representations seems to indicate the use of a composite bow, having a long firing range, allowing the setting up of new combat tactics at a distance. Elite soldiers (those whom the texts designate as lú-tukul, “those of the weapon”, and the nisk / qu whose role is unclear) constitute a permanent army.

To achieve their conquests, the kings of Akkad relied on a very effective army to triumph on battlefields far from their base, which was not possible for the city-states they supplanted. (source)

There would still be a lot to say about the mysterious Naram, more Ram than Rama, and hidden like him. Let him tell us his real life, to which other parts of Wikipedia, or this or that specialist, would respond. I could continue this little game for a long time, but I think you understand.

When you have read a number of my articles – there are a thousand! – you will have in mind the reading that I give of our distant past. When my version is familiar to you, you will know how to lift the veil of Isis. So skip the mental blocking that prevents you from thinking for yourself. Where the experts grope and joke by dint of being blind, trust your third eye, you will see wonders.

Who is Naram? God, do not doubt it. It measures four meters! He descends from the extraterrestrials of Hyperborea. Its high stature is the proof of it. He is of the race of Gilgamesh, Apollo, Zeus, or Cuchulainn. He is the same size as them. The same size as his father Rama. Like them, he belongs to the fourth humanity.

By the way, is he the son of Rama? Some heir to the great conqueror forgotten? Would he be Rama himself or one of his lieutenants? Or just a simple admirer who uses the methods and means of his idol? Naram-Sin left without telling me. I did not even ask him. For me, no doubt: it’s a deal. 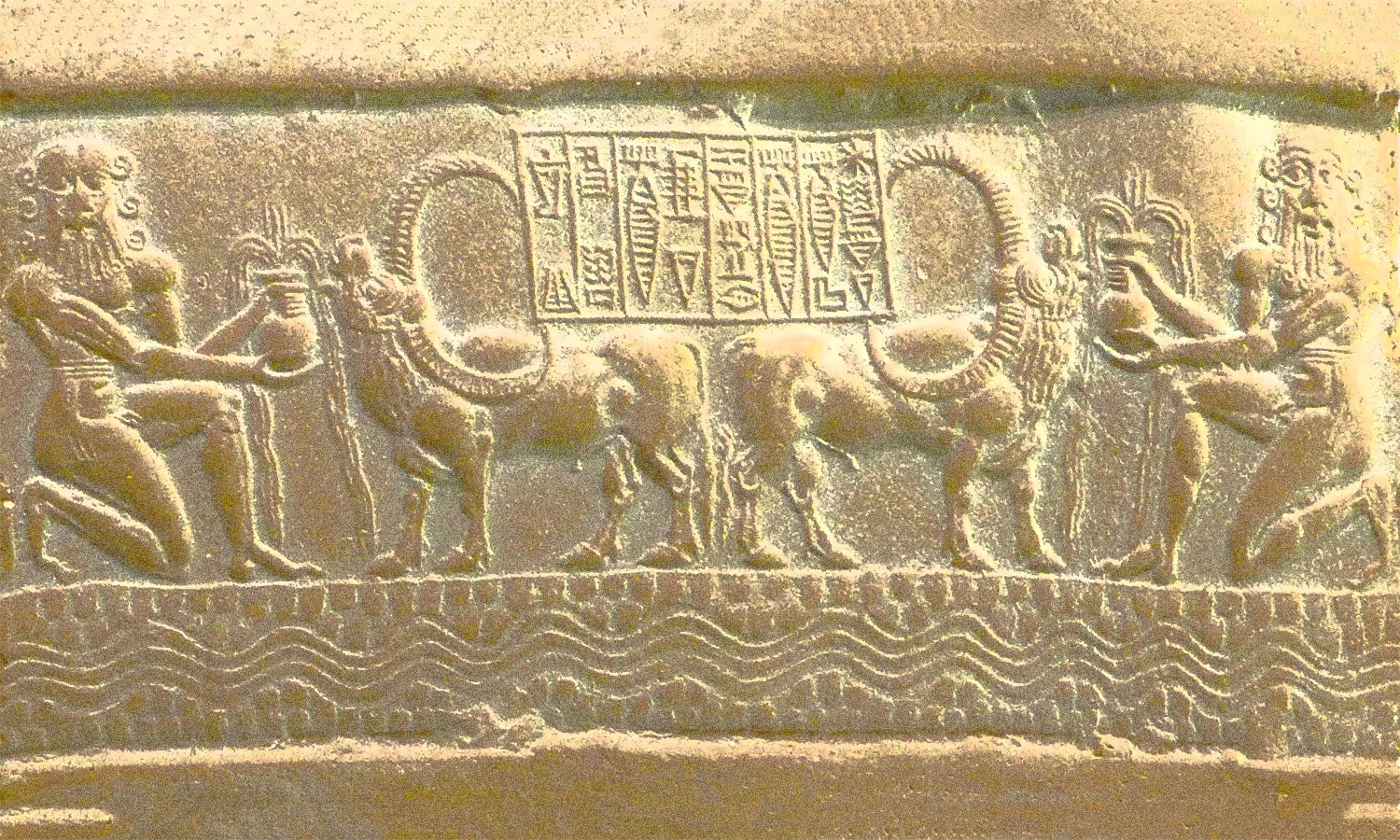 Maybe he will come back to see me one of these mornings? By then, mystery. You decide.