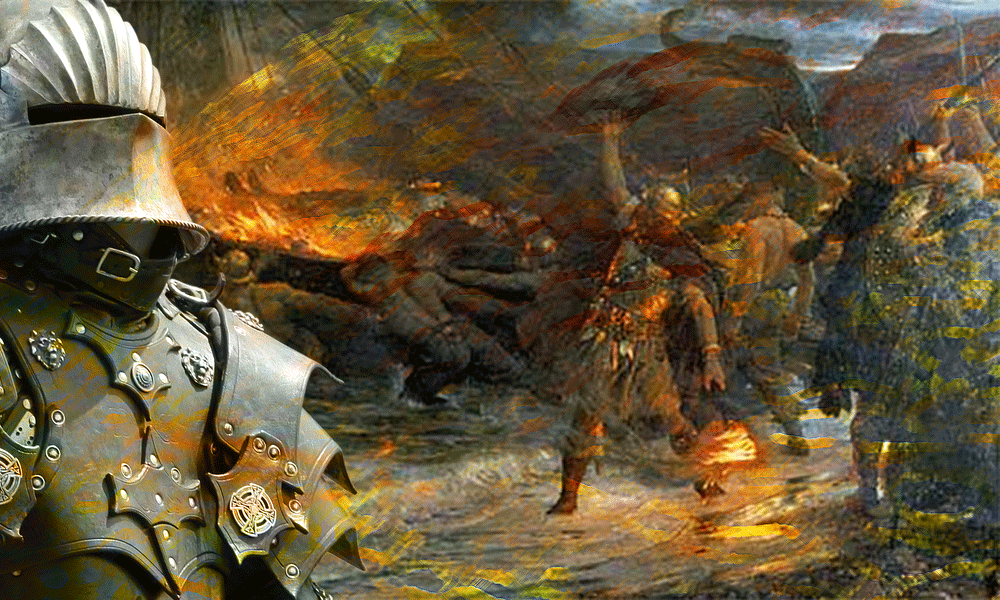 The hundred and thirty-fifth year of the reign of King Lugh -peaceful and prosperous until then- was marked by a series of ominous climatic events. The winter devoured the spring, it snowed until July and that summer, rosetrees gave no flower. At the fall, hot weather overcame the eternal snows that crown Mount Edin while on the dry riverbeds, dead fish stank the plain.

The water ran out altogether. Then fell the Great Night. In the thick darkness that covered the Middle-earth, the bravest warriors trembled with terror. And the earth, in turn, began to tremble. A low rumble rose from its bowels -throat which opens under the blade and lugubriously gargoyles- deep throat of a dead god. Yao was the cry of agony that rose from the depths. Yao lived, Yao is no more.

But in his fall he takes Middle Earth down. With the fatal cry of Yao, a terrible earthquake sliced in two parts the holy Island of the Four Master. Thus perishedthe  ancient Isle of Sidherin, forgotten ancestor of Erin.

Among the flashes and screams of terror, the whole Middle Earth soon crashed down into the North Sea. Mage Rekyn Ea claims that Middle Earth is not at the bottom of the wave, but up in heaven. He argues that Middle Earth took its flight to the stars, and will come back some day.

In the cold night, the wounded didn’t care, no one besides them, no infirmary, no healing, the dead drowned dead, hope had left our ranks. Captains and druids gathered on Mount Edin. There, the West Wind carried them on the Fortress of the Sun where lives the great Lugh.

“My brothers, perfect spirits, my dear friends, he began. Goddess Hera has made you the guides and support of the Stone People. The sacred values ​​of Mother incarnate in you and renew your acts.

Perfect minds, it’s up to you to the decision: where we will drive our people Who we entrust the fate of our own?”

It was clear for Lugh and for all that this land of Scotland can only accommodate a single kingdom, around Mount Edin. Its capital city is still called Edinburgh.

Edinburgh means in Gaelic the fort on the hillside. I do not question this etymology, but I have serious doubts about the merits of etymology as a science. My way of doing things is going to sounds instead of studying letters. These are the sounds that mark our unconscious, not the spelling. So I prefer to rely on the music I call the language of goslings – not birds, read the article, you will know why. Thus Edinburgh means in the language of the goslings the strong city of Eden. For in the Golden Tongue, Eden was said Edin.

Another kingdom will raise its capital to the north, after the great plain. It will be encircled by canals, just like Poséïdopolis, capital of Atlantis. Its fleet will race all the seas to bring back diamonds, spices and other distant wonders. Its fame and name will be unbeatable. Its name is Amsterdam. 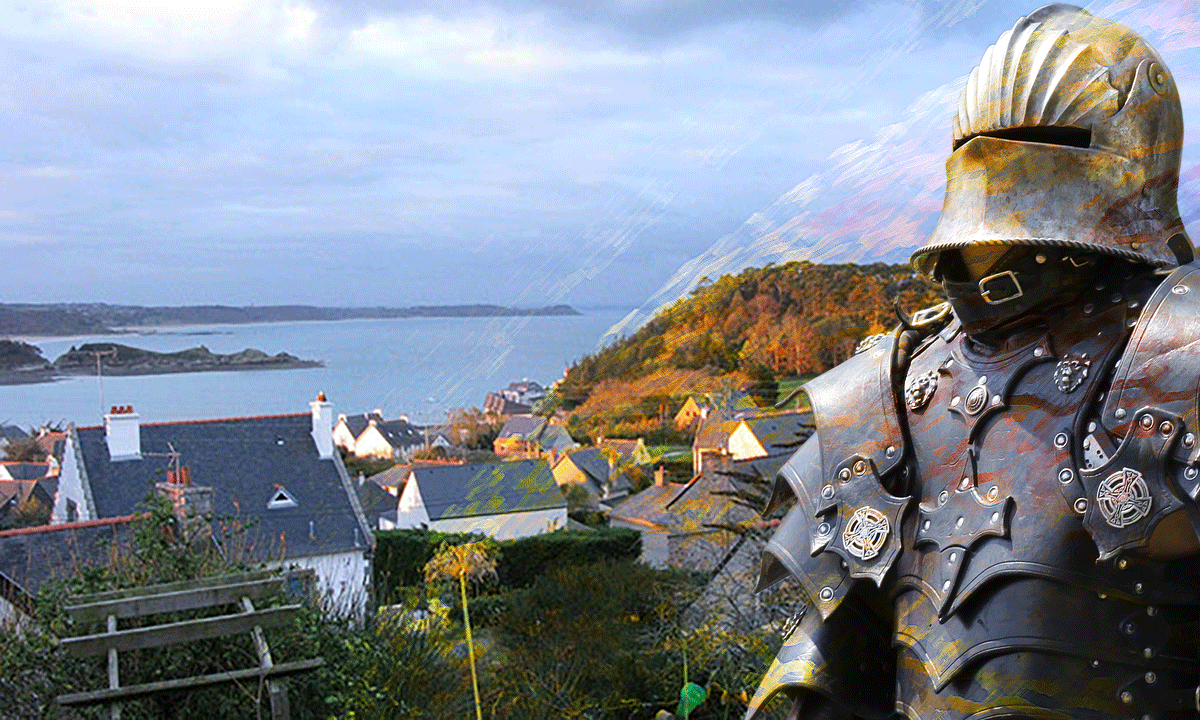 A third finally around the plateau of Nazado, in Upper Brittany. This ancient island is still under the sea.

The fourth is to come, later in the continental land it will build its capital, dedicated to the Goddess as Ys was the noble city of Isis, engulfed people and goods by the fury Iroise. This new Ys will be similar to the first in splendor and wealth, so will they call it Par-Is, ie similar to Ys.

But the Four Kingdoms only exist in the Sidhe. And in the wish of Lugh.

“Brethren, perfect spirits, who are the term and the avenue, why telling you that the kingdom will long to incarnate on this plane? You know this fact too well. In forests, in the mountain caves, our enemies lie in wait, ready to catch your every failure.

Troubled periods are there with their share of famines and epidemics. They will not disappear with the return of light, on the contrary. In such extremes, the illustrious tradition of our elders is easy to follow. When their land was threatened, exile distant and adventure were their answer: it is our solution.

But where to focus our steps? What course to follow? Who to entrust all hopes of Middle Earth? Who will be glorious and difficult task to lead our people felt towards a new empire? My dear friends, this is what we have to decide.”

A vast silence as death invades the boardroom. Enki himself remains silent. After a long fraction of eternity, rises Gorn Ar, son of Ar Torn. Around his bull neck, Ar Gorn has aurochs horn which earned his name. And on the horn is engraved the Open Hand which earned his father’s name.

“O Enki! he hurled facing the assembly of the Perfect.  O Perfect, o my brothers, you sons of the Sun and Stone” 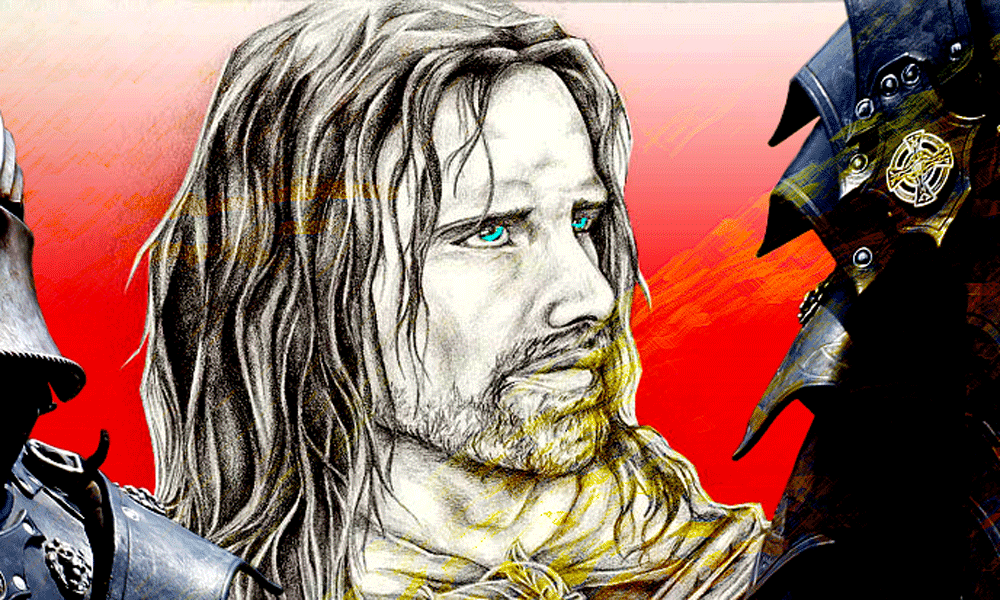 Here ends the manuscript of Ar-Korn, Tolkien called Aragorn. Since 2009, despite all my research, I could not find the end of this promising text. Yet I have returned archives! I found plagiarists, false, pastiches and mixtures! Besides allusions to the Four Kingdoms, from the most diverse authors. But my manuscript and its end missing, no trace, except of course the Akashic Records.

My readers can get relaxed, I do not intend to leave them stranded. The rest of the story is known. Here it is.

The fate of the survivors would be given to the four son of Lugh, who were called Setanta aka Cuchulainn, Enki called Tiki aka Prometheus, Enlil called Seth aka Satan and Ramos called Rama aka Ram. Other versions give Prometheus instead of Seth.

Each son would go in a different direction. Three of the sons fulfilled their contract. Only Cuchulainn had to change course to win Mexico where it is still honored under the name of Kukulkan or Quetzalcoatl. Enki settled in Brittany with his kins.

Ultimately, the four son of Lugh were the four major civilizing the origin of the current major civilizations. Our adventure begins with them. They are the four pillars of the Saga of Eden.

Soon you will read the adventures of young Enki, before the Great Waves and the fundation of Sumer.